Director :  Joe Lynch
Year Of Release :   2014
Principal Cast :  Salma Hayek, Akie Kotabe, Laura Cepeda, Togo Igawa, Gabriella Wright, Caroline Chikeze, Hiroyuke Watanabe, Jelena Gavrilovic.
Approx Running Time :   92 Minutes
Synopsis:   An action/thriller centered on a woman who faces down assassins sent by her ex, a mob boss, while holed up in her apartment.
What we think :  A glorious explosion of violence and depravity on celluloid, with Salma Hayek delivering a career making step into action heroine territory. Everly is magnificently brutal, a twisted, dark, hugely entertaining piece of poppycock that will elicit more than a few thrills and plenty of laughs amidst the explosions.

Salma Hayek never ascended to the superstar status I think she was intended. Ever since her breakout performance opposite Antonio Banderas, in Desperado, Hayek has largely been the go-to actress for roles involving “Sultry, sexy Mexican goddesses”; her sex appeal is cemented within the industry, yet her acting performances are often relegated to less important discussion. Aside from Frida, which courted Oscar glory years ago, there’s few Hayek films I can recall instantly that involve anything other than either comedic, or action oriented performances. Hayek should have been a major, major star. Instead, she’s never quite remained in the public eye, always being on the fringes of Hollywood royalty instead of front and center. Everly finds Hayek shouldering a leading role for the first time in a while,  although (sigh) it’s another “action” film and as such, expectations for quality storytelling should be kept low. The trailers marketed this as a gun-smoking violent epic in the manner of a Tarantino or Rodriguez, as Hayek’s character finds herself trapped inside a luxurious apartment being assailed by all manner of increasingly bizarre assassins. It certainly sounds awesome; how often, though, has an awesome concept been given a slipshod production in recent years? Is Everly the bullet ridden action classic the trailers would have us think it is? 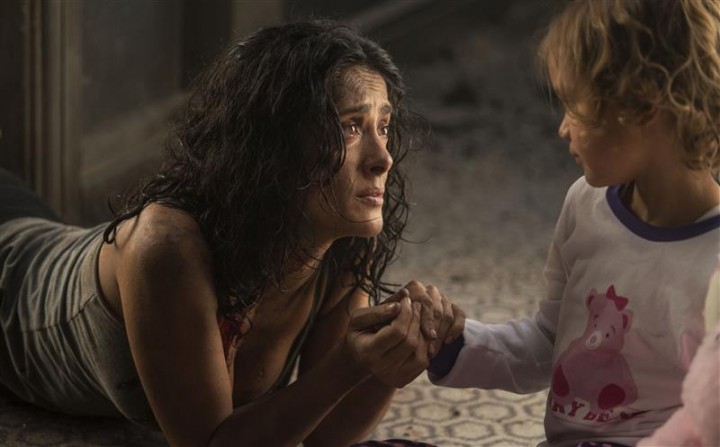 God dayum, this film is brutal. Joe Lynch’s Everly is one hell of a violent film. Soaked in blood, Everly’s pulp-fiction plot and high concept execution make for one hell of a dynamic, dynamite movie. From its opening moments, this is a film swathed in glorious carnage. It’s the kind of film you’d never watch with grandma. It’s like The Raid, only with guns instead of fists. Gutteral film-making doesn’t come as redolent with style as this – Everly is not only hilariously over-the-top, but it’s gloriously pandering to its obviously male audience. Misogynistic reprobates of the world unite: have I found a film for you. Well, this and Joe Carnahan’s Stretch, because they’re amazingly similar in tone. 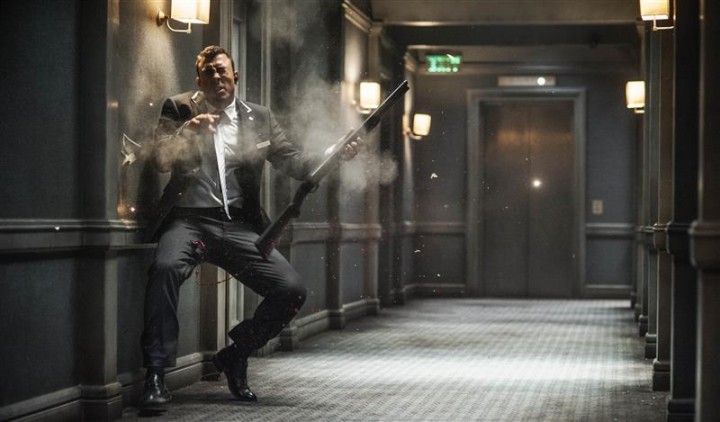 With it’s brisk plot, involving trapped prostitute Everly stuck inside an apartment with a tidal wave of assassins trying to kill her, on the orders of brutal crimelord Taiko (Hiroyuki Watanabe), the film doesn’t waste time getting itself going, nor does it spend a lot of time dwelling on tiny character moments that would enhance Hayek’s role significantly. No, Everly is all about the plot, and entirely without character. Most of the time I’d lambast a film like this for failing on character development, but with its razor thin depth, it makes the crazy gunplay and violence, coupled with a sublime dry wit (a “that’s a lot of dead whores” running gag doesn’t get old, really), Everly is a juicy, silly mix of Tarantino’s love of violence, Richard Donner’s widescreen action aesthetic, and Michael Bay’s salacious, treatment of Hayek’s glorious body. Ahem. Directed by Joe Lynch, better known as the man in charge of Wrong Turn 2 (yeah, he made that!) Everly is gloriously upbeat and utterly bloodthirsty, so perhaps Lynch was the perfect man to helm this bloodbath! 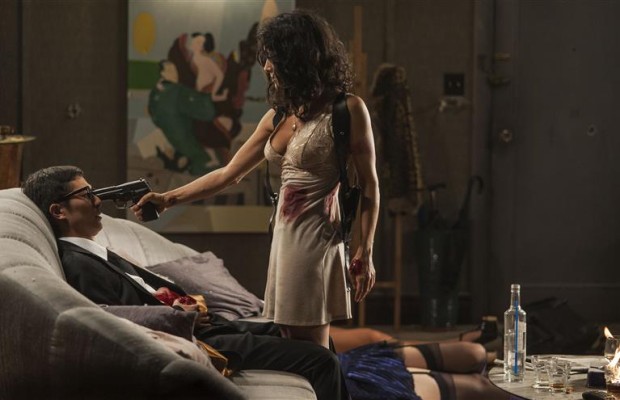 Is this a smart film? Nope. Is it completely ridiculous? Hell yes, and I loved it. Brain off, funny-bone activated, Evelyn had me guffawing, ducking for cover, and grimacing with every bloody head-explosion and limb-rending battle-bout. Scripted by Yale Hannon, who seems to delight in stage direction like “Evelyn fires guns” for several dozen pages, Everly’s rough edges of eye-grit make for bruising, gore-infused delight, as Hayek tears into her attackers with increasing ferocity. Everly’s mother and daughter show up mid-film to the apartment (splattered with blood and all) to have a deep-and-meaningful; Everly’s mother and daughter haven’t seen her in four years, berating her for not contacting them sooner – the irony of this is particularly amusing at a base level. The gradual insanity of the wave of assassins set to kill Everly is also rather hilarious, but the film handles it with a restrained wit that belies it’s blood-soaked ephemera. 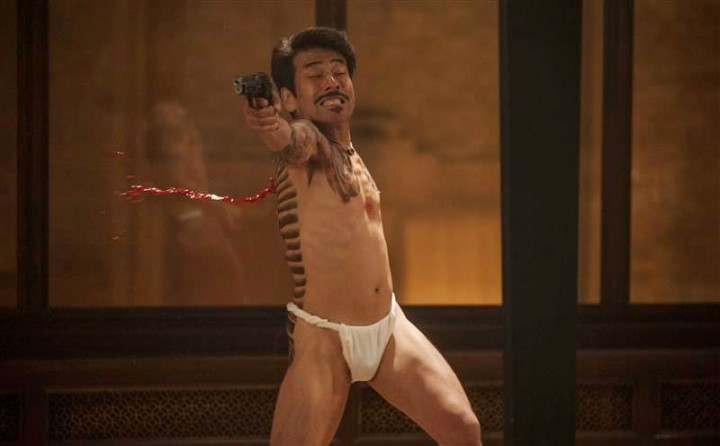 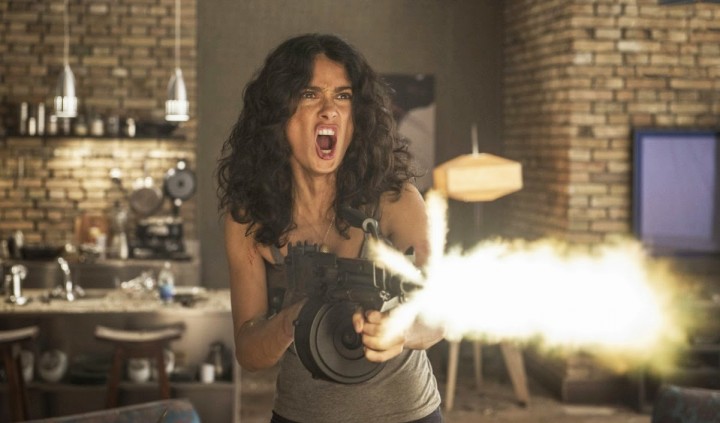 No, it won’t be everyone’s cup of tea, and most likely the constant stream of bodies piling up on screen will wear a few people out (those people would technically be called “critics”) but I thought this film had a certain ju ne sais quoi, a certain flavor that I really latched onto. Everly revels in its violence, displays a large quantity of silly, fun brutality, and possesses a huge degree of wanton brilliance. Everly is batshit bonkers. It’s cinematic trench warfare. No, it’s not an Oscar winner. But hell if I know a film that beats it for sheer energetic magnificence.