Skip to content
All jump and no joke for Annabelle makes for a fairly boring "horror" movie; jump scares aplenty, but little depth or convincing development and a turgid, derogatory story with few genuine thrills - Annabelle is atmospheric albeit little else. For genre fans only.

The real bride of Chucky?

In 2013, James Wan, the director of Saw, reinvented the horror genre with an out-of-the-box success in The Conjuring, a film light on gore and high on chills and thrills. Part of that film had an introductory sequence involving a husband-and-wife team of… well, ghostbusters, who encounter a group of young people terrified of a possessed doll, Annabelle. Naturally, with The Conjuring’s success, a spin-off involving said doll was hastily ordered, and Annabelle is the result. Again, light on gore (thankfully), Annabelle’s success or failure as a film depends greatly on character and plot; The Conjuring had that in spades, yet would a sequel about a dolly inhabited by an evil spirit (apparently!) make just as big a mark? 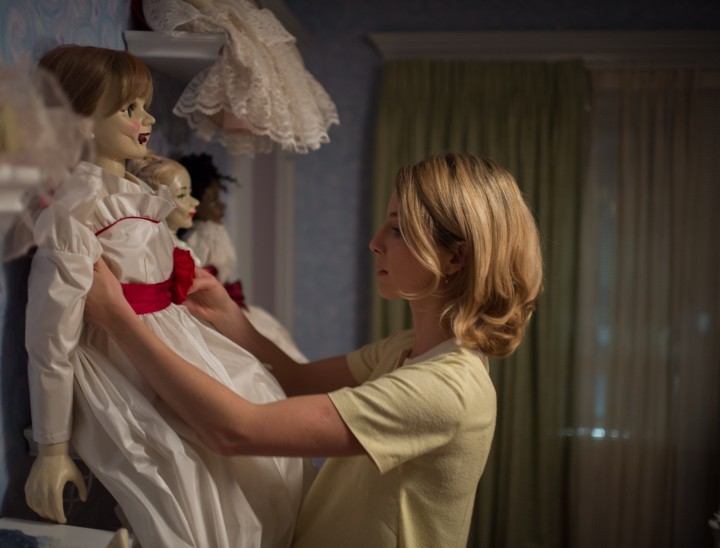 While James Wan has moved on to bigger and better things (directing the 7th installment of the Fast & Furious franchise, namely), his name is attached to this film as producer, although one wonders how much input he really had in the final product. Annabelle is helmed by John Leonetti (director of such awesome franchise successes as Mortal Kombat: Annihilation, and The Butterfly Effect 2, while pulling duties of DP on films such as The Scorpion King and James Wan’s own Insidious, as well as The Conjuring), so you might expect the film to at least look the part, and sound the part, of a modern day horror film. Annabelle’s screenplay comes to us from Gary Dauberman, and it’s here that the film suffers the most egregious creative vacuum.

Annabelle is, at best, mediocre. It’s a competent film, but little else. Certainly, it’s not up to the standard of The Conjuring, the film with which it will inevitably be compared. Box-office tally will disagree with me, but Annabelle’s more sub-par than the massive profit it made will attest. The film is all about atmosphere, all about build-up and release of tension, which it generally does with a laughably obvious crash-boom technique favored by directors lacking the skill to provide this kind of thing more organically. In place of genuine tension from the characters or the setting, Annabelle’s primary “gotcha” motif is through the titular doll, a creepy as hell avatar for the spirit of an evil cultist. 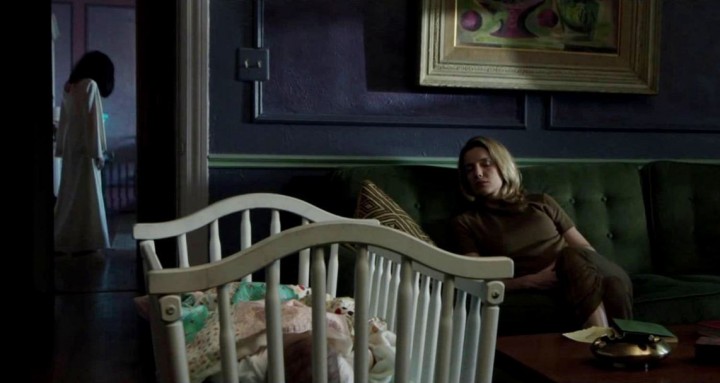 Those of us who grew up in the 80’s will remember a similarly doll-effaced film in Child’s Play, which introduced us to Chucky, the eponymous doll who slew countless victims through his plastic and possessed frame. Annabelle is similar; the doll, angular and peculiarly designed to elicit maximum skin-creep, looks positively freaky, which helps the film considering the characters are bland as butter and lack conviction. Annabelle’s central characters, Mia and John Form (Annabelle Wallis and Ward Horton respectively) obtain the doll when John purchases it as a gift for the soon-to-be-mother Mia, although after they’re attacked in their home by two psychotic satanists, it becomes apparent that the spirit of one of the murderers has transferred itself into the doll. Cue television static and weird noises that come from nowhere. 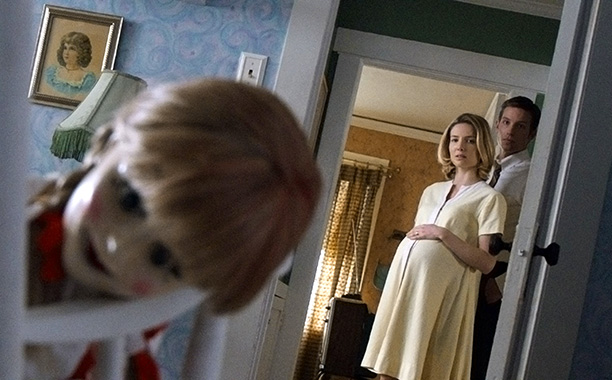 Mia and John are gormless, blank-slate characters to whom shit happens, whether we care about them or not. The script offers only tidbits of development beyond what’s needed for the story to move forward (which isn’t much, I’ll be honest), and although you kinda know you have to root for them to succeed, it’s only because we’re conditioned to do so by the genre, not because the characters deserve it. Alfre Woodard plays Evelyn, whom Mia meets out the front of a bookstore, and who has a terrible history of her own that allows her to bond with Mia as they try and figure out what the hell is going on. 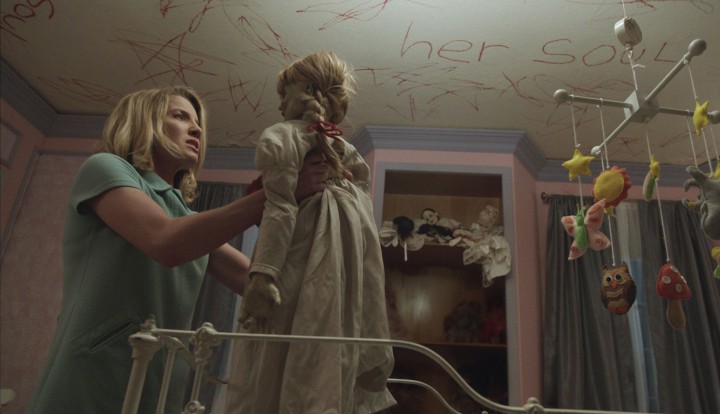 Annabelle herself doesn’t actually move, not once autonomously throughout the movie. Sure, the camera lingers on the doll repeatedly, waiting for it to nudge, move or leap across the screen and scare the bejeebers out of us, but Annabelle remains firmly steadfast. She does move, though, because of the things that happen when the camera isn’t on her. Leonetti uses this anticipatory reflex on our part to ratchet up the scares, most of which come in the form of Hollywood’s patented Crash-Boom™ technique – a gradual build up of music, or a complete reduction in aural ambiance, until a shattering musical cue or shape moving into frame. It’s an overused technique by many film-makers, and Leonetti doesn’t even try and do anything different. Script calls for a scare? Boom. There’s one. Oh heck, BOOM, there’s another. Is that a shadow in the background? BOOM, have another jump! Sure, it makes for some minor chills here and there, but this kind of affected tension inevitably becomes wearying rather than compulsive. 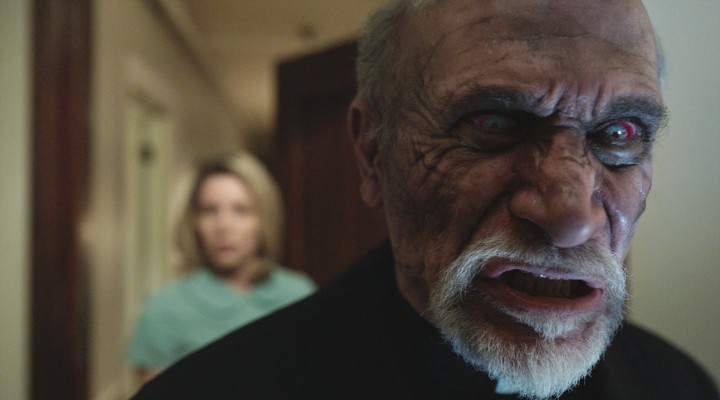 Another obligatory genre overuse is the inclusion of a heavily pregnant woman as the lead character. In movie-speak, a pregnant woman is largely defenseless, especially against some kind of spooky-creepy manifestation of evil, so to see Mia’s trials during the early part of the film, combating both the home invaders and then her pervading sense of unease over Annabelle’s “she’s looking at me” arc, does build up some convincing (albeit forced) tension. Once the baby arrives, however, the film stumbles through danger and horror. The film tries to set up Mia as the ingenue heroine who finds some inner strength to do what she needs to protect her baby – it’s a little like Rosemary’s Baby in this regard, which is perhaps a salient comparison considering the lead character’s name is the same as the actress who played Rosemary in Roman Polanski’s “classic” film. 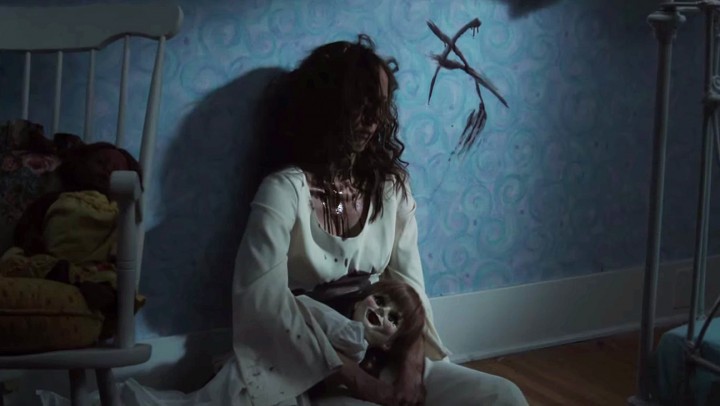 Motif use throughout the film is pervading, almost eye-rolling in obvious positioning. The repetitive recall of General Hospital, the Sixth Sense-style appropriation of a creeping entity, the things sticking out just enough to catch on clothing or trip somebody over – it’s a gamut of genre cliches, all steadfastly rolled out by Leonetti’s compulsively standardized style. Let’s not forget stairs, either. Stairs can be all kinds of terrifying if you live in Horror Movie World. Mysterious objects falling from nowhere, music starting and stopping on their own, and a consistently malevolent force upending Mia’s life in the most drastic of ways. Naturally, the “disbelieving husband” is the film’s trump card, further isolating Mia in her gradual dawning of supernatural horror. 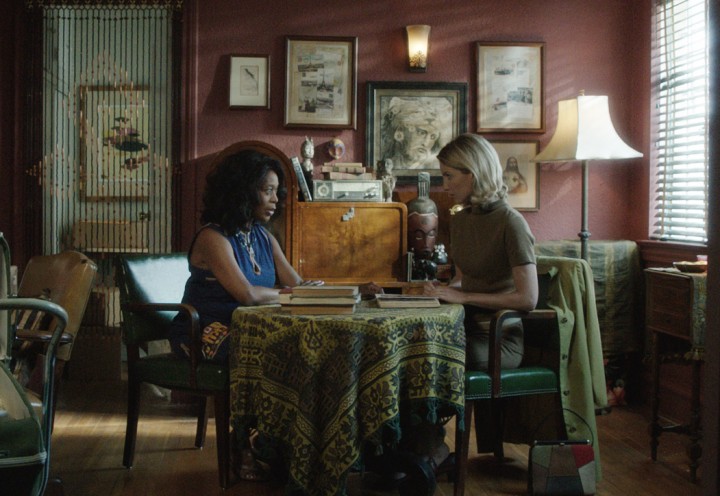 It’s telling that all Annabelle really achieves is reminding me of other films in the genre. Spooky doll aside, Annabelle’s lack of ingenuity or creativity prevents the film from achieving the sense of foreboding it strives for. The film is technically proficient in production, yet lacks a pointed anger, a definitive edge that separates it from others in the genre. While it might have been spawned from The Conjuring, all Annabelle conjures up are a bunch of thrifty jump-scares and boo-gotcha moments that plaster haphazardly over the generic plotting and bland characterizations. Effective in the moment, perhaps, but hardly likely to linger in the mind.