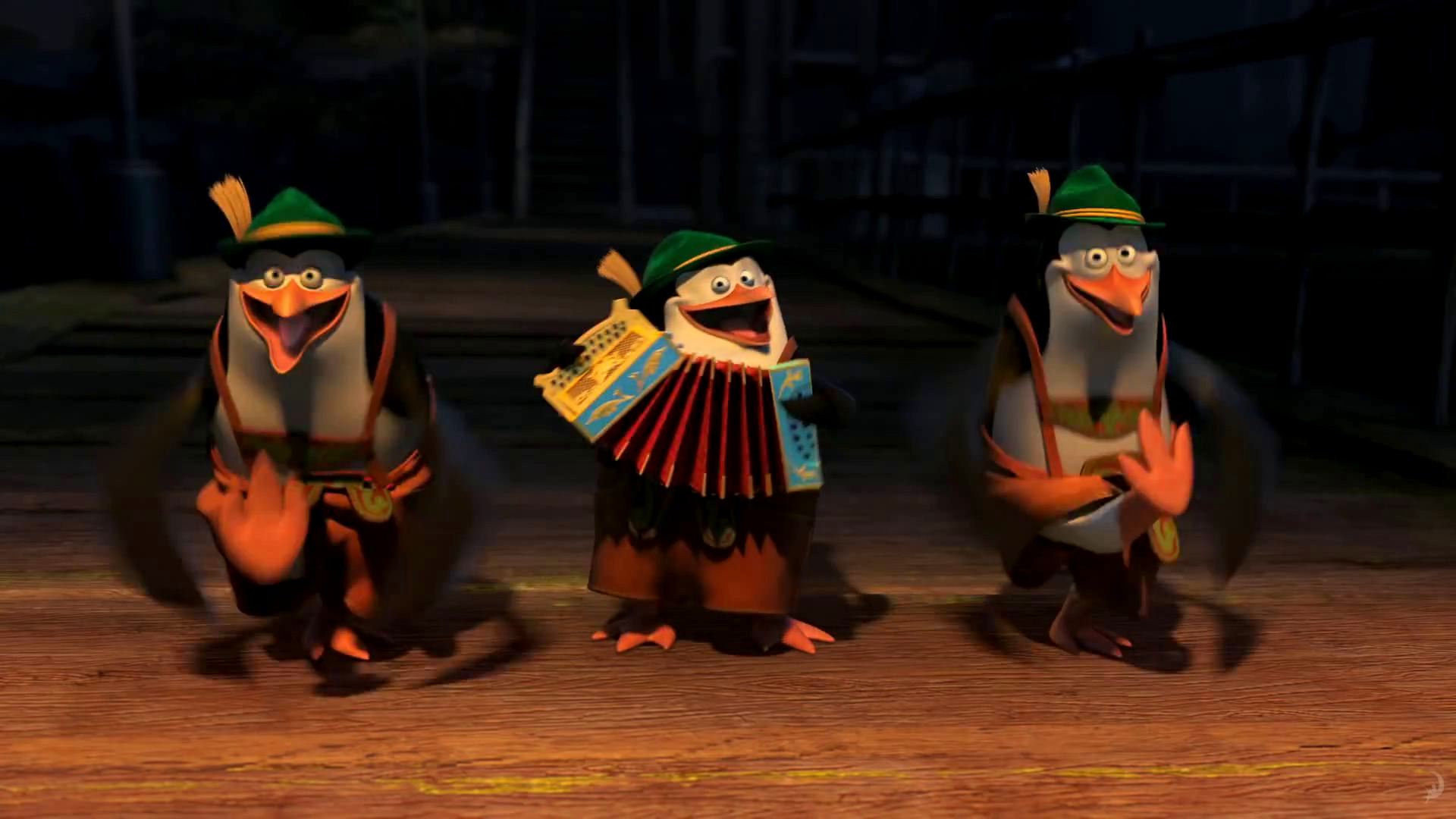 Director :  Eric Darnell + Simon J Smith
Year Of Release :   2014
Principal Cast : Voices of Tom McGrath, Chris Miller, Conrad Vernon, Christopher Knights, Benedict Cumberbatch, John Malkovich, Ken Jeong, Annet Mahendru, Peter Stormare, Werner Herzog, Danny Jacobs, Andy Richter.
Approx Running Time :  90 Minutes
Synopsis:  Four penguins work with a secret organization known as North Wind to defeat the nefarious plans of evil octopus Dave.
What we think :  Okay, I’ll admit, I busted a gut watching this. I laughed my ass off. It’s as silly a film as you can get, with its anthropomorphized animalia doing their usual schtick involving pop-culture references (which will date the film hugely in decades to come) and eye-bleeding animation of a standard so good it’s crazy, but Penguins Of Madagascar made me guffaw and clutch at my sides with glee. It’s a giddy, fun feature for the whole flippin’ family.

This film in one word? Zany.

Yeah, back when Madagascar came out, I was convinced they’d make a feature on that film’s stand-out supporting characters, the Penguins. Three films later, plus a cartoon series, and finally our favorite animated penguin troupe has been given their own feature film to star in. Aimed squarely at the youngsters, with one eye on keeping adults entertained as well, Penguins Of Madagascar is a flat-out riot of pratfalls, animation and jokes, albeit at the expense of character or story. 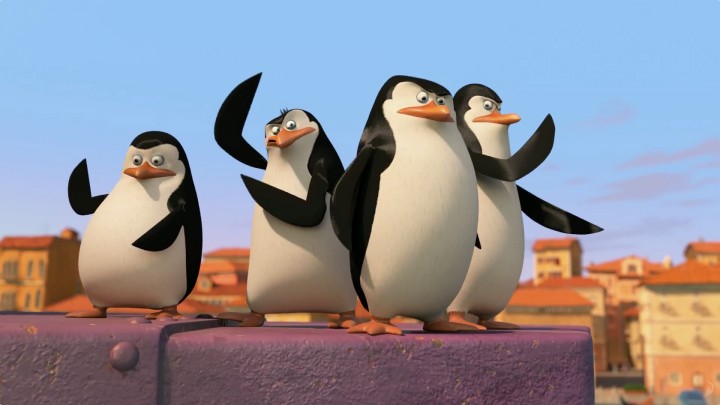 Four penguins from the Antarctic, Skipper (Tom McGrath), Rico (Conrad Vernon), Kowalski (Chris Miller) and Private (Christopher Knights), find themselves under attack from the nefarious plans of evil Octopus, Dave (John Malkovich), who has gone rogue after a lifetime of playing second fiddle to penguins, the cutest animals on the planet. After attempting to capture the foursome, Dave turns his attention to kidnapping every penguin in captivity around the globe, in order to transmute them into hideous creatures that nobody will love. With our four heroes outmatched, they are aided by the skillful North Wind, a secret animal agency dedicated to world peace. The North Wind team is led by Agent Classified (Benedict Cumberbatch), a grey wolf who seems to think he’s awesome, Short Fuse (Kim Jeong), a harp seal with expertise in demolition and explosives, Eva (Annet Mahendru), a snowy owl and the femme fatale of the group, and Corporal (Peter Stormare), a Norwegian polar bear who has a thing for cute penguins. 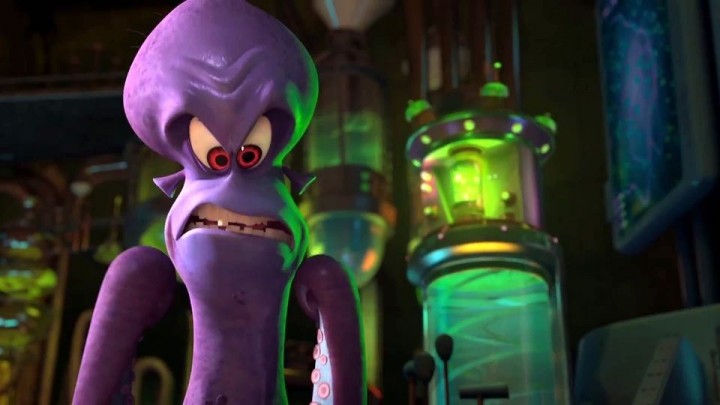 Penguins Of Madagascar is exactly the kind of crazy film you think it is. If you’ve ever seen the Madagascar films, or even the Penguins own short film entries, you’ll know the kind of humor they bring to the table, with rapid-fire pratfalls, dialogue and non-sequiturs delivered at such a breakneck pace you’ll probably have to rewatch this twice to catch them all from laughing so hard. The plot is largely inconsequential (apparently, the script was written by Michael Colton, John Aboud and Brandon Sawyer, but you get the impression that an entire team of joksters was on hand in the planning room letting rip with their best material) and the characters, for a kids film, are pretty generic, but the pacing is so breathless, the set-pieces so convoluted and complex, the film’s ADHD-style energy and insistence that humor comes before story ensures even the youngest kids will remain glued to the screen. 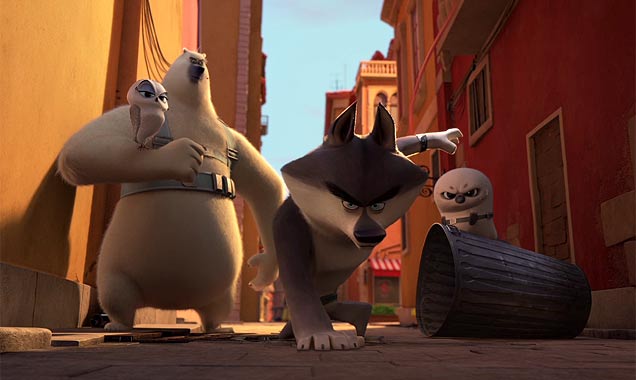 Now, I’m a big fan of the Penguins, and I’m equally a fan of this kind of humor, but at times even I felt like the film-makers were trying almost too hard to keep the film going. The film’s underlying subtext, about being true to yourself and to value each others best aspects, is diluted to a perfunctory whistle-stop tour of emotional content; otherwise, Penguins Of Madagascar keeps up a roller-coaster rush-ride of thunderous animation, hyper-kinetic editing and some truly dazzling animation. It’s the balance between story and fun that’s waaaaaaaay off here, so I’m guessing that once the blindside of laughs subsides, and you’re forced to watch this multiple times with the kids at home, the jokes will wear off and the film will be quite annoying. That said, I thought it was hilarious. 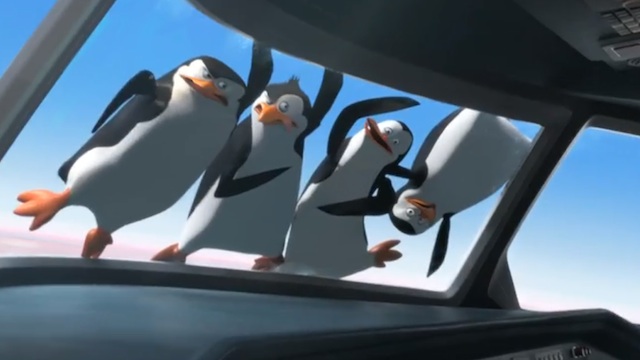 Key to it is the personality of the leading quartet – Skipper, voiced by Tom McGrath, is my favorite (he’s the main character in the film be sheer weight of dialogue), and McGrath’s comedic timing is, as it has been with this character since day one, spot on. Private, who handles the film’s emotional content, since the other three see him as more of a “mascot” than an actual participant in their adventures, is given a sweet little innocence by Chris Knight’s mournful portrayal, while Rico and Kowalski provide the lions share of sight gags and one-hit hilarity. Rico’s penchant for swallowing everything (to be regurgitated later for use) is hilariously scripted, and Rico’s “intelligent one” character once more contrasts well against Skipper’s more obtuse leadership. The Four Winds team is typically “seasoned intelligence operatives” stuff, with Benedict Cumberbatch’s Agent Classified feeling like a cross between Patrick Stewart playing James Bond, and Patrick Stewart playing Benedict Cumberbatch. John Malkovich has a fine time chewing his dialogue as Dave, the evil octopus, particularly delivering the meta-joke henchman names he is given. 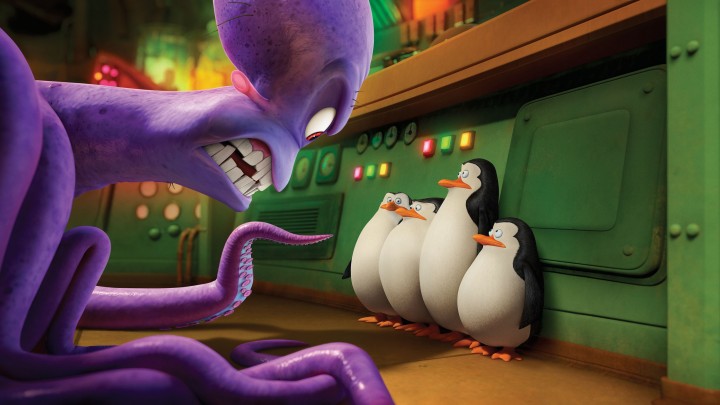 By and large the allure of a Penguins movie is derived from its skewed humor and slant-ways plotting. Outrageously inventive, Penguins Of Madagascar feels like one of those Looney Toons cartoons amped up to eleven, as if Eric Darnell and Simon Smith and their teams were given a factory’s worth of Red Bull to consume before they began. Some may find it wearying, some may find it all too much of too much, but as a blast of Hollywood sugar aimed directly at the fun-center of your brain, Penguins is hard to pass up.