It would seem that 2014 became the year two English intellectual legends went head to head – Alan Turing, father of modern computer science, led the charge in The Imitation Game, while Stephen Hawking, the legendary cosmologist and theoretical physicist backed it up in The Theory of Everything, two biographical films about people the human race is better for having had amidst us, and two films nominated for a Best Picture Oscar. The Theory Of Everything has the distinct advantage, however, in that Stephen Hawking is (currently) very much alive, making his stamp on human knowledge and the pop-culture zeitgeist all that much larger now than even twenty years ago. 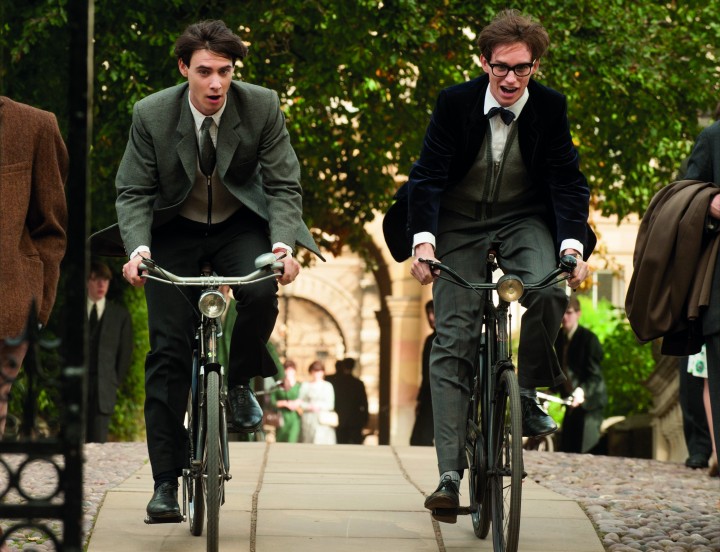 While Hawking has in recent times become a subject of nerd-humor thanks to television shows such as The Big Bang Theory, I admit that I knew very little of his history or even his work; personally, I found theoretical cosmology a bit of a bore in middle-school, so I went on to become a film blogger instead. While it tackles Hawking’s gradual succumbing to degenerative motor neurone disease, which has rendered him utterly incapacitated in every way (including speech), the film delves into the man behind the paralyzed body we all recognize. Trapped within that body is one of history’s most brilliant minds, a mind so powerful it gave us quantum mechanics and the idea of black holes, singularities and a whole bunch of other sciencey stuff I don’t understand. 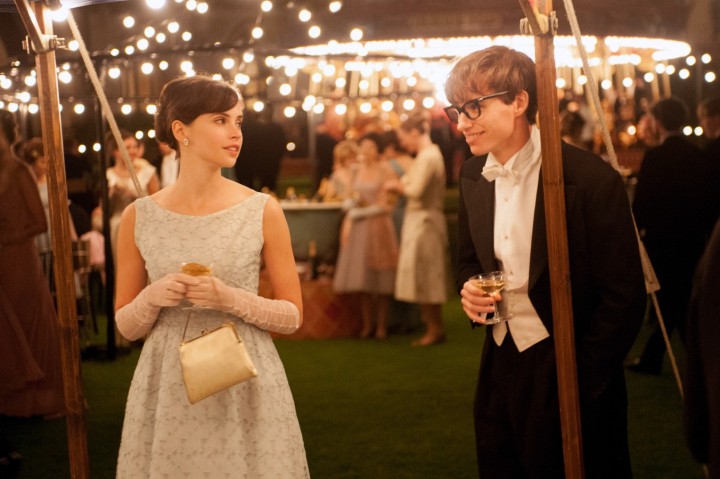 Theory’s greatest power is in its ability to humanize Hawking. That’s not to say he isn’t human, but as a larger-than-life figure these days, to see his backstory played out like he is a regular Joe is both refreshing and stimulating. The loss Hawking has suffered by his body – could one consider that a giant gag at his expense, from the very God he purports to not believe in? – is astounding, although everyone living with Lou Gherig’s Disease has suffered the same indignities so therefore can’t be belittled. The film’s manifestation of Hawking’s eventual decline is subtle, heartbreaking and hugely moving, most of which is accomplished by Eddie Redmayne’s terrific personification of the man. Redmayne’s affectations and mannerisms are handled with care by the film-makers, never allowing it to become a parody or send-up; Redmayne’s a canny enough performer not to showboat the role either, disappearing almost completely into the role. Such a transformative acting experience only comes along rarely, and I think Redmayne’s performance here is the one he’ll long be remembered for, above most others. 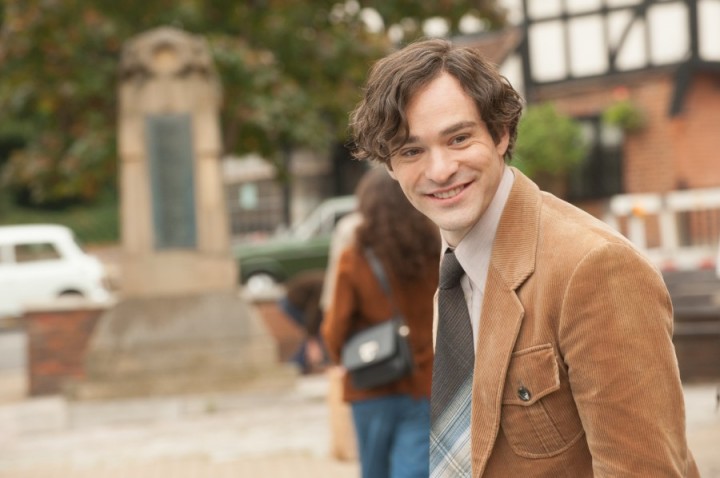 While Redmayne might garner the most kudos for his acting here, his co-star in Felicity Jones, as Hawking’s eventual first wife, Jane, is just as good. Jones’ natural chemistry with Redmayne is telling, and the camera just loves her (especially in those crazy 60’s hairdos!), and although Jones isn’t asked to contort herself in the same manner as Redmayne, she provides excellent support (literally and figuratively) for Hawking’s brilliance. In many ways, Jones is our viewpoint to Hawking, she’s us, lacking the intellectual ability to understand his brilliance, yet admiring, loving and supporting him all the same. Her gradual realization of the relationship she’d have with Hawking is almost as harrowing as Hawking’s breakdown as well. While I’d be hard pressed to call the film a “romance” in the true sense of the word, the love Jane and Stephen shared during their time together is indeed appealing. 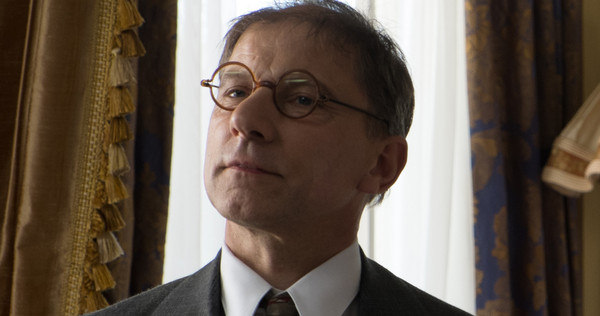 A good biographical film will show the subject in a meaningful, dramatic and/or accurate light. A truly great biopic will do the same, but include the subjects flaws, whether they’re manifestly justified or not. Not in any shameful, tabloid manner, but flaws are part of a person’s character just as much as their other aspects, and Theory attempts to portray all of Hawking’s personality even when it might not be as flattering as they could be. Hawking’s family life, with Jane, and his friendships with his Cambridge University chums, are depicted with charm and ethereal friendship through the lens of James Marsh’s poetic direction. Theory has a somewhat fairy-tale styled visual tone, the soft-focus colors and angular shades of Cambridge’s hallways eliciting a distinct calmness across proceedings; this belies the difficulties both Stephen and Jane had in their marriage. 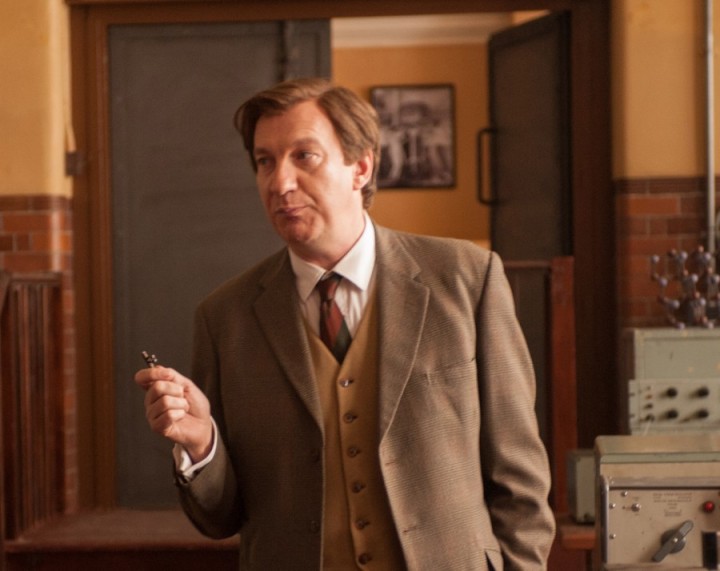 The Theory Of Everything manages to essay the life of Stephen Hawking without stepping on anyone’s toes, nor does it paint anyone in a particularly poor light. The breakdown of Stephen and Jane’s marriage seems like a natural progression rather than anything either of them did. Jane’s relationship with Jonathan Jones (Charlie Cox) is slanted to make Jane seem less ungrateful for her marriage to Stephen (whether it’s true or not) and makes both Stephen and Jane a product of circumstance rather than two people who grow apart through indifference. Hawking as well seems to be a tormented saint in many respects, his drive for pure science at odds with his love (or lack thereof) for Jane  as time wears on, and while the film glosses over the real hardships of their marriage (as much as a two hour film can ever hope to encapsulate within its purview) with remonstrations of love and perseverance, you get the sense that there might be more between the lines, as it were. 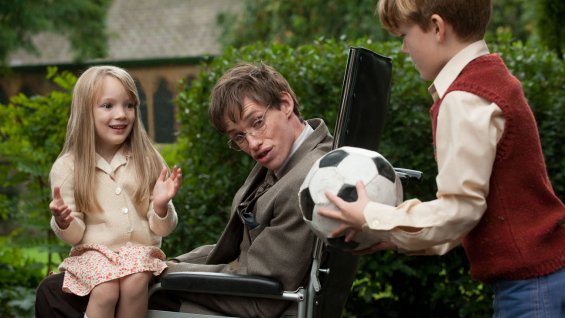 The Theory of Everything is a biographical picture that paints one of the modern era’s greatest thinkers and scientists in a truly magical light. The film skirts with greatness from time to time, particularly as Redmayne must inhabit the deformed body of Hawking once his physicality gave out. I think the film isn’t as hard-hitting or as truthful as it could have been, the contraction of time within the narrative leave many gaps that I’d love to have seen played out, (problematic for the film is that it plays like an extended “greatest hits” of Hawking’s magnificent life) but for what we do have here, is pretty good enough. If nothing else, it’s given Eddie Redmayne’s profile a significant boost, and has once more placed Hawking fairly in the public eye. A terrific film, with terrific performances, directed with acute sincerity (albeit with a faint hint of hero-worship about it) and giving one of history’s most accomplished thinkers a love-letter to inspire all of us.

Oh, and watching Hawking’s computer-voiced Dalek impression had me laughing out loud in the cinema. That moment made it for me.