The most lethal sniper in US history.

Another war film, another asking of the age-old question: war, what is it good for. Absolutely nothing. Clint Eastwood has tackled war before, with his duo of WWII flicks, Flags Of Our Fathers, and Sands Of Iwo Jima, but this is his first picture to tackle the modern war, undertaken by the US in Iraq, following the 9/11 attacks. As with his previous films, Eastwood’s direction is assured, calm and practiced – the guy is in his mid-80’s, so if anyone’s gonna know how to direct a film by now, it’s him! – giving American Sniper a tense, focused style that drives the audience into the world of the military long-range gunman. American Sniper is based on a real person – US Navy SEAL Chris Kyle, here played by Bradley Cooper – and as such, has to accommodate many of the man’s feats and personality traits as it sets about depicting the horror and psychological toll combat plays on the minds of those we send in to fight. 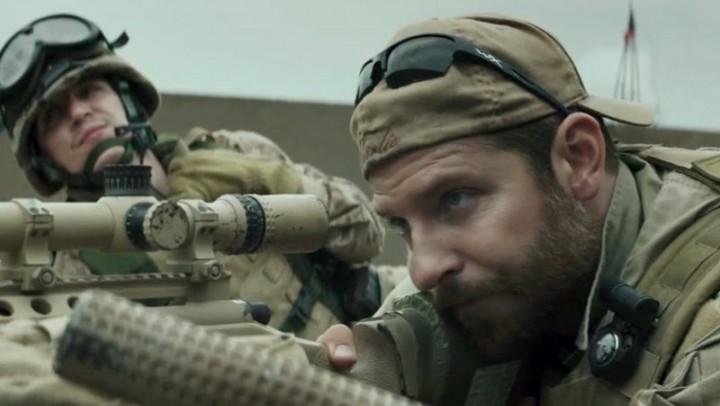 Chris Kyle (Bradley Cooper) is a Texan who joins the Navy SEALS to fight terror following the events of 9/11. While training, he meets a woman, Taya (Sienna Miller), whom he marries before heading off on deployment to Iraq. While in Iraq, he becomes one of the most successful snipers in the military, his unerring accuracy making him something of a legend amongst the troops; Kyle’s mission becomes the capture or death of a local sniper known as Mustafah (Sammy Sheik), who works for Iraqi insurgent boss The Butcher (Navid Negahban). But Kyle hides a deeper, darker secret. The war, and his actions in it, have begun to take a terrible toll on him mentally, and the separation from his wife becomes more than he can bear. 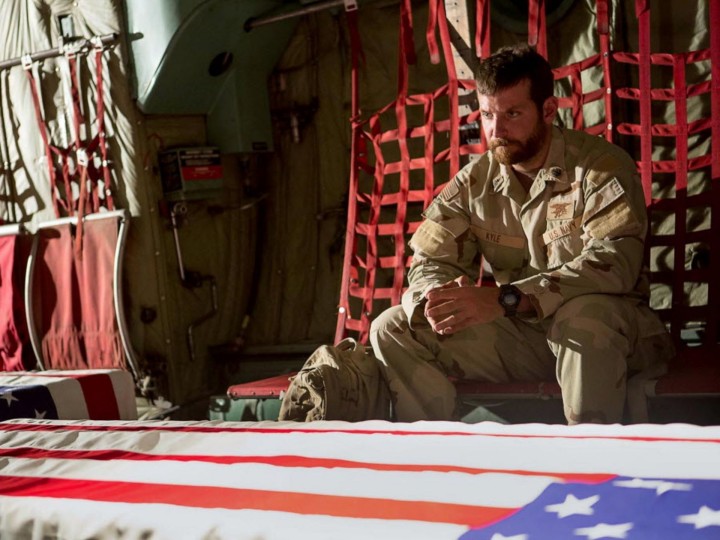 I think it’s fair to say that Clint Eastwood’s last really great film was 2008’s Gran Torino. His most recent directorial efforts, Invictus, Hereafter, J Edgar and, as his second film to release in 2014, Jersey Boys, were solid if wholly unremarkable films, most making back their budget but gathering little acclaim and even less status within the man’s legendary career. Invictus particularly was disappointing, even if the film’s final product was nearly faultless from a technical perspective. American Sniper sees Eastwood return to the top of his game, with the kind of film you feel he could make in his sleep. Based on a true story – or rather, a real person – American Sniper takes us into the battlefield of Iraq, and the battlefield of a returned soldier re-acquainting himself with his family; the film’s a two-pronged examination of the toll combat takes on people.

With most of the narrative taken from Chris Kyle’s autobiographical book of the same name, American Sniper’s sense of authenticity and pragmatic realism is telling. Eastwood’s command of naturalism is once again strong here, as it is with most of his films, lending the events of the movie gravitas and an inbuilt tension. Going into the film knowing almost zero about Kyle, his achievements for the Navy SEALS, or his life, this film captivated me, moved me, and in the end, made me cry. It takes a special kind of film to do that. I usually tear up in “brotherhood” films, where groups of men bond over a shared experience and have more respect for each other than many do their own families. This is that kind of movie. I can certainly see why Eastwood decided to sign on – reports have it that both David O Russell and Steven Spielberg were at one point set to direct this, before the studio finally signed ol’ Clint.

The film is solidly mounted. The settings are true-to-life (shooting took place in Morocco and California) and the characters, typically hidden behind a veil of sand and military uniform paraphernalia, tend to become simplistic outlines of actual people. As with most films of this nature, the “bad guys” – in this case the Iraqi insurgents – are largely cannon fodder, faceless barbarians who are good for only one thing: being killed.

The focus remains squarely on Cooper’s Kyle, particularly when he’s in Iraq, although when he’s back in the US Sienna Miller’s time to shine arrives. Miller hasn’t ever been an actress on my radar of dependable quality, but she’s eminently good here in a role I thought was a tad underwritten. While she starts strong, berating and emasculating Kyle in a bar in one of the films’ early scenes, by the end she becomes a fairly standard “wife left home with the kids” type that cries a lot and asks her man to come home. I know, this is a common occurrence in these kinds of pictures, and God knows my personal experience with army life is enough to make me understand and recognize all that these people give up to fight for freedom (or, in the case of Iraq, oil…), but Taya doesn’t really feel much more than a sounding-board for Kyle’s PTSD, offering little by way of characterization herself.

American Sniper is shouldered almost entirely by Bradley Cooper, in a role I think suits him to the ground. Kyle’s a complex man, although less complex as the film winds on as his experiences in Iraq leave him almost a shell of a man – driven, but ultimately confused about why he’s there. The film’s screenplay (by Jason Dean Hall) has as much to say about the concept of war as it does about the justification for it, all through the eyes of a man sent specifically to kill the enemy. As a sniper, Kyle must make life and death decisions almost daily, as not only men, but women and children come into his cross-hairs. His job is to know when to pull the trigger, and the pressure of ending a life on your own recognizance takes its toll. The film’s “villain” is an Olympic-level shooter working for an Iraqi insurgent leader, and across four separate tours of Iraq does Kyle hunt him down. Cooper’s performance is magnetic, as Kyle’s bullish attitudes and patriotism are wound tighter than a Kardashian bra-strap. Cooper is gruff, amenably approachable in the role, offering as much depth as he can muster for the part – and he bulked up too, a far cry from his athletic look in American Hustle or Silver Linings Playbook.

Eastwood doesn’t play favorites with morals or ethics in this film. He simply tries to present the events as they happened (I’m assuming), and gives us a flawed, sympathetic, occasionally broken man to root for, and as an audience, we totally buy into it. Eastwood’s subtext about the war itself is inherent in much of the dialogue between the soldiers, but it’s never overt or specific. We all know what America was doing in Iraq, and the cost the country is continuing to pay. There’s no “nyah nyah, told-ya-so” from Eastwood, nor is there any politicizing of the matter. Thankfully. This isn’t a political film; it’s a film about a SEAL doing his job to keep his family free. Eastwood’s unequivocally simple direction, keeping his camera right where it needs to be and blessedly free of distracting showmanship (hear that, Michael Bay?) is refreshingly honest, a director in command of his medium and without any ostentation, delivering yet another terrific story without supercilious extravagance.

American Sniper is dynamite storytelling. The situational sequences of combat are both ferocious and tense (and it feels a lot like a pared back version of Black Hawk Down at times), and the character moments beat with a core truth that’s undeniable, even as they flounder a little in conventional methodology. While it’s probably not the greatest war film ever made, American Sniper is a testament to not only Chris Kyle, for the backbone of it all, but to Clint Eastwood’s magnificent direction and Bradley Cooper’s terrific central performance.