For a few weeks at the bottom end of 2014, the entire world was polarized by America’s reaction to the decision by Sony Pictures to hold off releasing this film – a comedy about two dudes and the North Korean dictator Kim Jong-un – because of threats made by the North Korean leadership to blow up cinemas which screened the movie. While captains of Free Speech bellowed from their pulpits about the ability of a sovereign country to dictate the free speech mandate of another, and to affect a major studio’s release schedule, the rest of us wondered if all this was really worth the hassle. The Interview never really seemed to be the big-budget blockbuster the subsequent publicity made it out to be, and although Sony eventually released the film through a number of online platforms (and a minor, unpublicized cinematic release in a few major cities), the end result of timidity and capitulation of Sony’s American branch is perhaps the biggest reason this film will become a minor cult classic, if not an outright financial success. Korean dictators aside, is The Interview even worthy of such intercontinental armament? Is this buddy-comedy worth the financial losses and artistic criticism leveled against the studio for refusing to release it even in the face of potential terrorism? 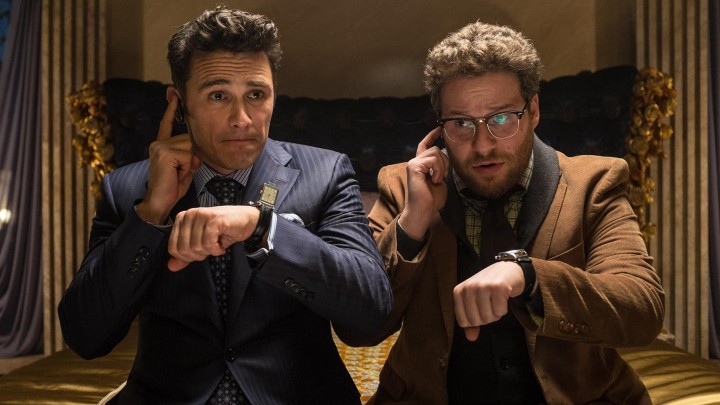 The timing on this movie has to be perf…..wait…. cancelled?

Plot synopsis courtesy Wikipedia: Dave Skylark (James Franco), host of the talk show Skylark Tonight, interviews celebrities about personal topics and gossip. After Dave and his crew celebrate their 1,000th episode, they discover that North Korean leader Kim Jong-un (Randall Park) is a fan of Skylark Tonight, prompting the show’s producer Aaron Rapaport (Seth Rogen) to arrange an interview. Aaron travels to rural China to receive instructions from Sook (Diana Bang), a North Korean official, and Dave accepts the task of interviewing Kim. CIA agent Lacey (Lizzy Caplan) proposes that Dave and Aaron assassinate Kim to facilitate a coup d’état by use of a transdermal strip that will expose Kim to ricin via handshake; they reluctantly agree. 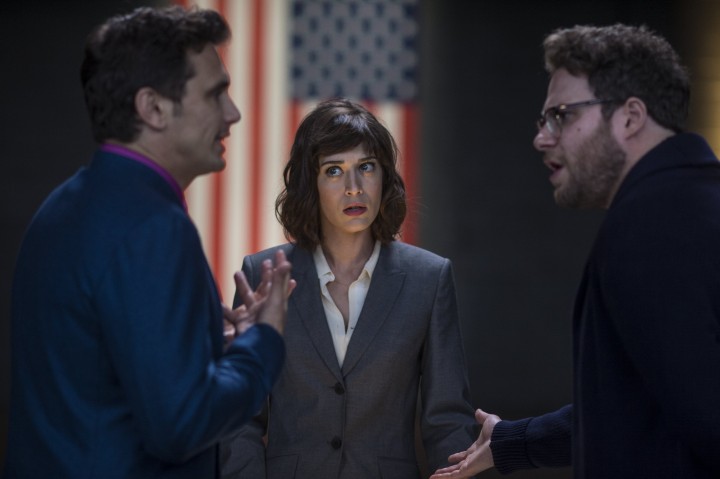 Sally started to wonder if she’d made the right choice.

The Interview isn’t that funny. It’s got a few laughs, yes, but they’re scattered and feel like having your teeth ripped out. The film’s premise is – for a comedy – prescient in terms of its dealings with media scrutiny and the socio-and-geo-political landscapes of the Korean peninsula. As an exercise in comedy, my personal feeling is that The Interview is low-rent at best, and in no way should have been taken seriously by anyone, least of all some two-bit tin-hat dictator with delusions of inadequacy. The fact Kim Jong-un took such offense to this rubbish speaks more about his own intelligence than it does about the tone, plot or value of a comedy of this nature. Should films about dickheads around the world be made? Yes, most definitely. People need to know about them. Should comedy films lambast the kind of people represented by Jong-un as charlatans and fools, destined for a good ol’ Amercian ass-whuppin’? Assuredly, yes. Team America took that kind of film and nailed it (my wife would disagree, though), while Charlie Chaplins The Great Dictator remains possibly one of the greatest films of all time; The Interview is by and large a similarly styled comedic movie that portrays America as all-powerful, and North Korea as a clusterf@ck of chicken coops and inadequate broadband. 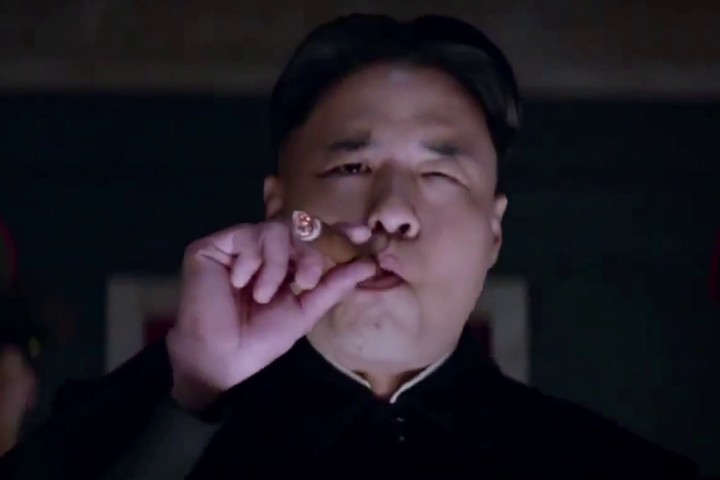 Thirty minutes into this movie, I was ready to switch it off. Coarse, brash, iniquitously silly, The Interview hangs its hat on crass stupidity and the audience’s appreciation for Seth Rogen’s ability to play the straight guy to James Franco’s rambunctiously absurd television host (who’s a narcissistic, arrogant twat). So many adjectives in a single sentence, I know. Ugh, this film rankles the nose. It’s absurd, and even as a comedy it makes little sense – I guess at some level people will find the Franco/Rogen twosome amusing, but personally, this film lacked the insidiously subtextual humor of This Is The End. I’m in Team Quality over Team Throwshitatthescreen, and this film smacks of the latter so much, it’s painful. 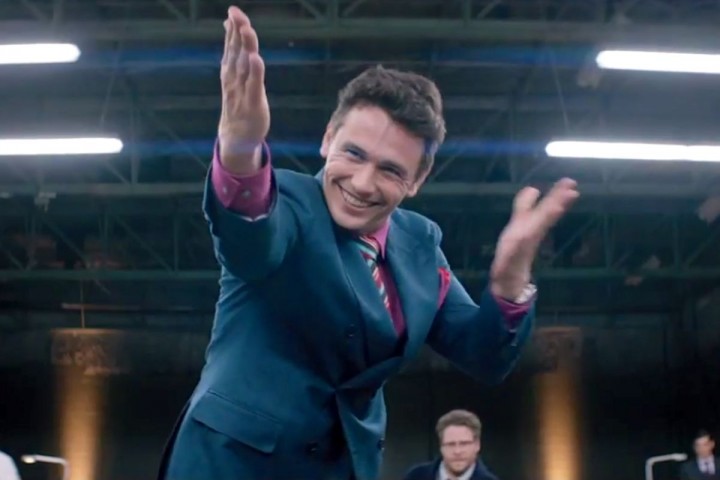 And now, let me introduce, a conversation about Miley Cyrus and camel toe!!!

There’s a lot of talent here, most of it wasted on total drivel. Randall Park’s Kim Jong-un is creepy, but effective. Park has that glint in his eye that tells us he knows he’s in on the joke; it’s a joke that’s badly retold by Dan Sterling’s ham-fisted screenplay, an ill-deserving skewering of North Korean wealth divide mixed with overly flamboyant Franco’s lampooning of American insensitivity. Seth Rogen is the film’s straight man, although you may have seen a sequence involving him and a small projectile needing to be secreted away up his ass; Rogen has had the good fortune to luck himself into a decent career, apparently not through any actual talent of his own but rather by association, and The Interview is yet another painfully one-note role for the guy. It just shows how little flexibility he has as an actor – Rogen and Franco’s roles in this film are of the kind of horrible “shouty” comedy made so prevalent since audiences tend to tune out of anything with notions of intelligence. 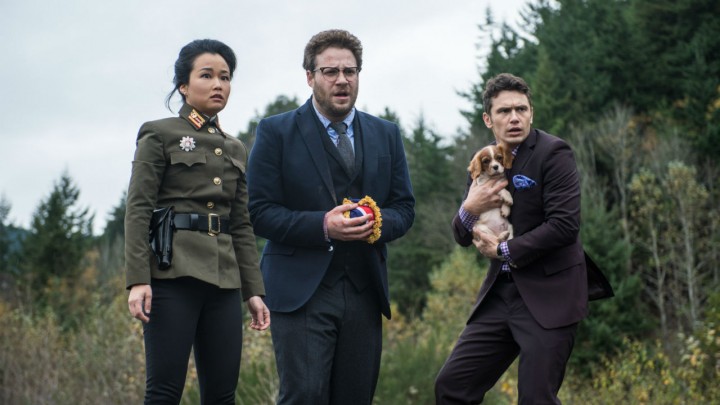 The performances probably aren’t the issue. Poor Lizzy Caplan, slumming it as a CIA director who gives the boys their mission to assassinate Kim Jong-un, looks frazzled by the fact she’s asked to say the line “the tip is the hardest part” with a straight face. I admit, I couldn’t even type that without grimacing. I guess I’m just not the crude demographic this film is aiming for. No, for me the problem lies in the script, which is an affront to actual comedy with its confrontational, gross and hard-line in-your-face abruptness; the point of The Interview’s humor is to make people cringe, maybe? I’m not sure, but some of the dialogue made me wince, and not in a  good way. 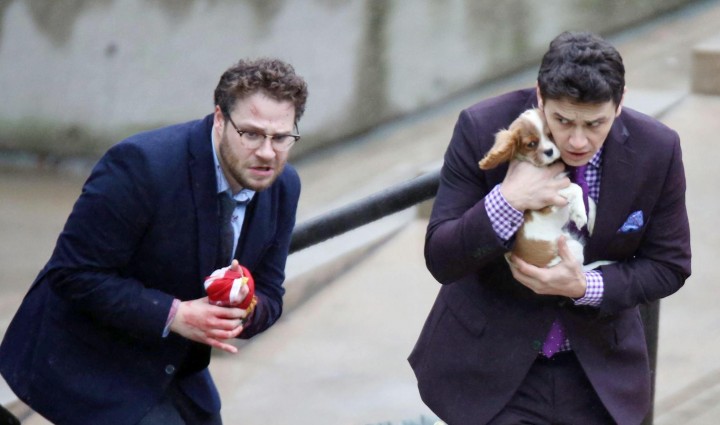 Okay, I’ll be blunt: I expected better from a film that caused so much fist shaking and rhetoric from across both sides of the Pacific. Rogen, Franco, Goldberg: consider this my fingers burnt. I’m not touching that again.