Director :  David Fincher
Year Of Release :  2014
Principal Cast :  Ben Affleck, Rosamund Pike, Neil Patrick Harris, Tyler Perry, Carrie Coon, Kim Dickens, Patrick Fugit, Casey Wilson, Emily Ratajkowski,  Missi Pyle, Sela Ward, Scoot McNairy, Lisa Banes, David Clennon.
Approx Running Time :   149 Minutes
Synopsis:   When a man’s wife suddenly goes missing, presumed murdered, all suspicions begin to point to him. But, like any good thriller, not all is as it seems.
What we think :  Decisive, mesmerizing dramatic thriller from David Fincher hits every note superbly – the cast deliver top-rate performances (and Rosamund Pike deserves an Oscar for her work here), the story is utterly compelling (“torn from the headlines” is perhaps an apt phrase) and there’s a sense of horrific finality to the outcome that you can feel leeching through every pore of this movie. Gone Girl is a great film, perhaps the best film of 2014. And if it isn’t, then it’s pretty darn close.

A new David Fincher film is something to celebrate. Invariably considered one of the greats of his generation, perhaps along similar lines to Cameron, Hitchcock, Spielberg or Capra for his visual tenacity and storytelling prowess, Fincher has crafted a career out of the genuinely frightening, the gorgeously fanciful, and the socially, morally, anti-patriarchal films he brings us with such fluidity and accuracy. He’s a filmmaker of the highest order, a man well in control of the medium in which he works, crafting emotion, love and care in every single frame. The man who gave us films such as Fight Club, The Social Network and (my personal favorite) Panic Room is a master-craftsman, a righteously grandiose if sociologically scant helmsman of human life in picture form; if Fincher were a Renaissance artist, I’d say he’s perhaps closer to Raphael than any other – his crisp, sharp lines and use of textures, color, and the form of movement within each frame is exacting, details and tones shifting throughout both the aspect ratio and the movement of the story to carve a definite emotional resonance with each of his projects. A Fincher film is typically a work of visual poetry, artistry of the highest caliber from a technical standpoint: it remains up to the individual whether the story, the characters or the architecture of a particular movie is of interest. With Gone Girl, Fincher may have just created his masterwork. 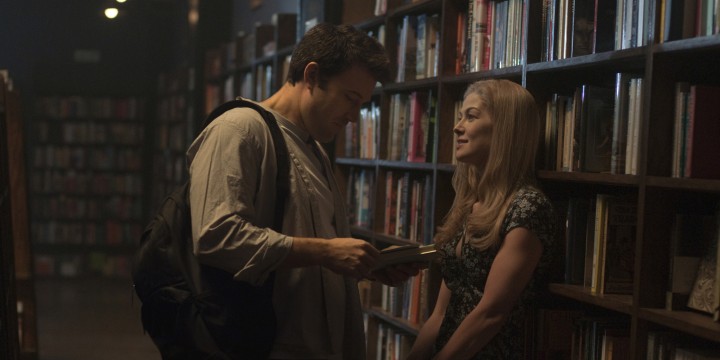 If you flip the page, you’ll find out that Voldemort killed Harry’s parents.

In place of a typically synoptic report on Gone Girl’s plot, it’s perhaps best to approach this film with as little foreknowledge as possible. Yeah, that’s right: spoilers, folks. I’m not givin’ ’em away. All I will tell you is the juiciest outline: Ben Affleck plays Nick Dunne, a husband whose marriage to Amy (Rosamund Pike) has fallen on the roughest of rough patches. On the day of their fifth wedding anniversary, Amy goes missing. The searches and investigations of her disappearance all start to lead the police (and the hounding media) to one conclusion: that Nick murdered his wife and is trying to get away with it by claiming her as missing. Naturally, the trial-by-media swings into full effect. This juicy morsel of plot is all you need to know to get a handle on the kinds of subtextual underpinnings Gone Girl contains. The film is based on the 2012 novel of the same name by Gilliam Flynn, who wrote the film’s screenplay here, so you’d expect the film’s story to capture most, if not all, the subtle nuances of the original book in minute detail – Fincher’s exacting eye for this detail is well known – and this expectation is not only met, but perhaps exceeded. 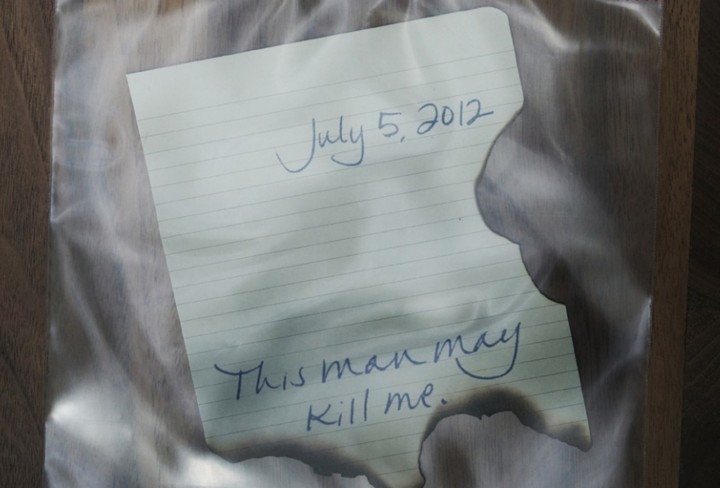 Rather presumptuous, don’t you think?

Gone Girl is a dark, dark movie. Not in terms of visual tone, although there’s enough shadows and monotone moments to bring a sense of melancholy suburban terror to proceedings, but the arc our characters journey on here is particularly sharply rendered. Betrayal, redemption, further betrayal, deceit, hatred, revenge; yeah, it’s a typical marriage. As an examination of so many themes, including the media’s reporting on crimes such as this one, Gone Girl resonated with me deeply. Why? I’m still not sure, but I suspect that it has to do with the film’s elements of love and waning love, at having to work at a marriage and a relationship when the “honeymoon period” wears off. Being married myself, I connected with the story’s examination (albeit a tentative one) of whatever the opposite of “marital bliss” might be, because too often these days people take the easy way out and “simply” get a divorce.

Oh baby? Can you fetch me something to wear?

Without spoiling the film, the enormous twist in the middle of all this left me gobsmacked. It ripped into everything I was expecting from the film, which until then had been focused on Nick, his flaws and foibles in his relationship with Amy, and turns him from being a douchy kinda husband into a weird, sympathetic anti-hero; and it turned Amy into…. something else entirely. The pack-rape of Nick’s character by the media is something we see too often in real life, as accused criminals are ripped to shreds by the networks in search of ratings, leading the public down every twisted path of convicting them well before any court trial. The fact that half the film is spent not knowing is particularly prescient in that it tends to lean the audience’s favor onto Amy, before things twist around and we’re forced to recalibrate our thinking, and beliefs, on both of them. 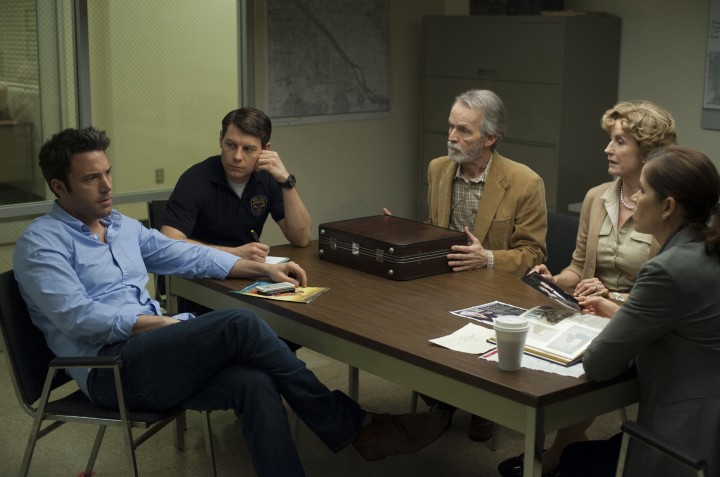 So I said to Snyder, yeah, I’ll be Batman, but you have to give me an awesome Batmobile!

Gone Girl is an apocryphal examination on marriage, relationships, and perception. Is it a story of misogyny, of overt feminism, of sexual degradation used as an emotional weapon? Yeah, it is all of those things at times, and before you all get on your high-horse about such stuff, it’s reasonable that the examination of these subjects isn’t necessarily meant to condone such actions. The thing about Gone Girl’s tone is that it leaves us to our own decisions on the actions of both Nick and Amy; as Tyler Perry’s lawyer character, Tanner Bolt, tells him towards the end, “You two are the most f@cked up people I’ve ever met and I deal with f@cked up people for a living.” This is a perfect encapsulation of what makes Gone Girl so interesting, so intense. Neither Nick nor Amy are particularly likeable, in as much as they have their flaws and marital expectations, but they’re human beings, and as such can never be perfect. Although they exemplify the typical American marriage, trying to put on the airs and graces of a couple deeply in love, the rotten core of their relationship is what garners the films attention. 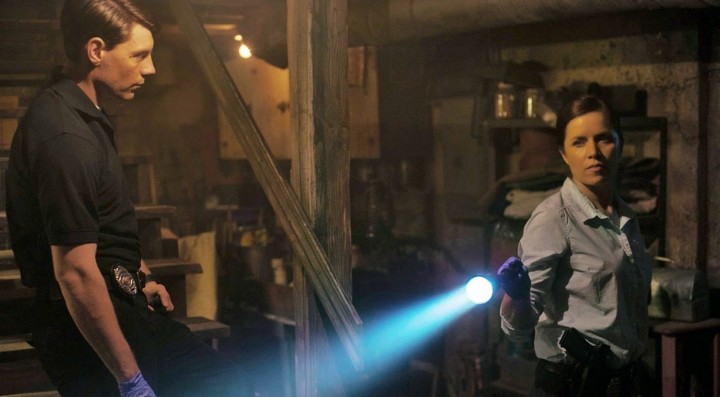 That’s some damn creepy killer shit over there, innit?

Ben Affleck, as Nick, is particularly good. I kid: he’s excellent. The whole cast deliver superb performances, that’s for sure. Affleck’s Nick is just a dude, trying to please his wife, trying to make a living with his sister in the bar they both own, and trying to just get along with everyone. His actions throughout the movie doesn’t smack of a typically survivalist mentality, which is perhaps what it should when Amy’s big twist kicks in, and his own faults quickly rise to the surface and draw out their own unique tension. Rosamund Pike is a revelation here, in a hugely Sharon Stone in Basic Instinct styled role; she’s gorgeous, intelligent and devoted to her husband, but underneath that exterior facade (and it is a facade) is something nasty, almost cruelly evil, and Pike delivers a performance so frightening to all men it’ll make you think twice before hitting on strange women at the club. While her performance early in the film is cherubic, her presence through the latter half of the film is a transitional arc between “good on you hun” and “I hope you friggin’ die, bitch” for the audience. Fincher’s ability to command such emotional journey is fascinating to watch. 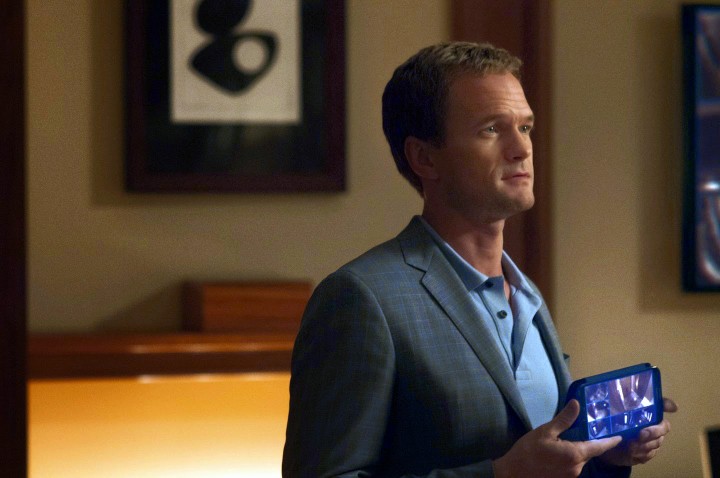 Yeah, I live in a Big Brother house.

The secondary characters, such as Nick’s sister Margo, played by Carrie Coon, one of Amy’s former lovers Desi (a fabulous Neil Patrick Harris, in an uber-creepy part), and the detective leading the investigation into Amy’s apparent murder, Rhonda Boney (Kim Dickens) have just as much development as the mains, allowing the film to stretch itself to depths of such elegant restraint and care, it’s almost intangible. Tyler Perry’s attorney is solid work from an actor I wasn’t expecting to be as convincing, while Patrick Fugit (Almost Famous), Emily Ratajkowski and Scoot McNairy have minor roles that serve as counterpoints to their co-cast. Fincher’s ability to cast actors in roles best suited to their abilities is a proven fact, and he doesn’t drop the ball here. I think even people who can’t stand Ben Affleck might find him appreciably restrained and suitably on-point for this role. 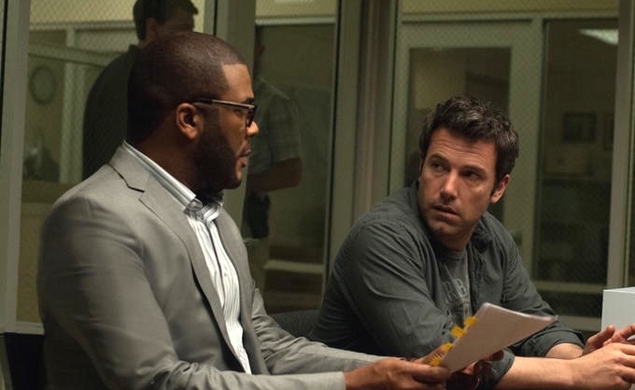 I’m not gonna lie. I thought you were crap in Daredevil.

Fincher’s direction is exacting and delicate. He’s such a methodical, razor-sharp director. He knows just how to use the frame, filling it with detail that serves to drive the narrative forward, or simply (simply? no such thing in a Fincher movie!) provide texture and mood to the story. The Dunne’s Minnesotan residence is typically homey, albeit antiseptic to a degree, while the film’s slow slide into monochromatic color palettes engenders a change of mood as the story unfolds. Jeff Cronenweth, who served as DP on Fight Club, The Social Network and The Girl With The Dragon Tattoo for Fincher, gives the film a veneer of unsettling, uncomfortable flatness. The colors are, with a few exceptions, rather muted, a way of giving the mood of Nick and Amy’s marriage a visual shorthand, and it’s only when Amy’s reunion with Desi occurs at one point in the movie does any real, natural color seep into the frame. It’s short-lived, however. Cronenweth’s lighting and use of complex shadows and darkness is particularly evocative, a melancholy, moody style that serves the atmospheric plot really well. 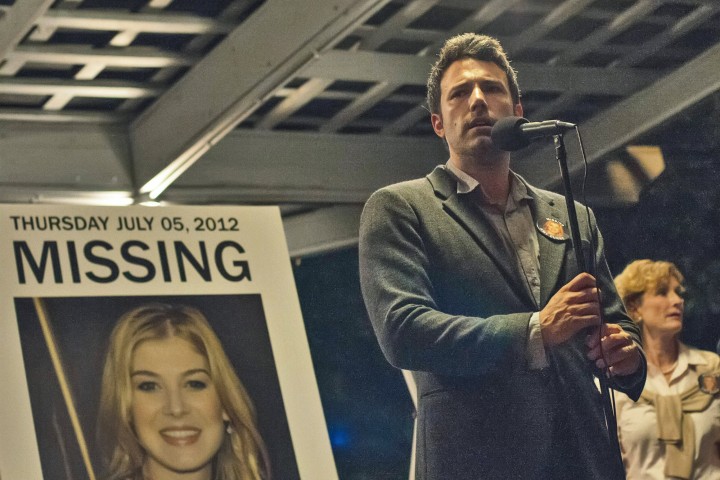 Now, I’m not a great one for subtext; there are plenty of reviews out there that’ll talk about motivations, unconscious desires, even utterly preposterous notions of Fincher’s views on women and relationships. I’m not really a big one on “getting” subtext in a film, therefore because I’m such a troglodyte you’ll have to excuse the relatively superficial review I’m giving Gone Girl. Irrespective of my thoughts on what Fincher (and screenwriter/author Gillian Flynn) is trying to say here, Gone Girl is simply mesmerizing. From its dawn-drenched opening frames, to its “smile for the camera” skin-crawling conclusion, not a moment in Gone Girl is wasted, not a moment is unintended as anything other than a further focus on Nick and Amy’s relationship, in the broader sense, in some way.

Hey…. hey, can somebody switch it to the football?

I fell for this film hard: it reminded me of Fight Club the first time I saw it, in that I felt it was a film requiring more and more detailed examination, yet Gone Girl might as well exist in a different universe. Gone Girl is an absolute masterwork from Fincher. I thought Social Network was good, but not awesome, but this? This is a magnetic, mysterious, valuable entry into American cinema, that should be looked upon in years to come as an outright classic. As I said in my capsule review at the open, if this isn’t the best film of 2014, then you’re watching the wrong movies.