Movie Review – Guardians Of The Galaxy

Hooked on that feeling.

If Guardians Of The Galaxy teaches us anything, it’s that Marvel has some enormous testicles. After capturing the Comic Book Universe market with iconic characters like Iron Man, Thor and the rest of the Avengers roster, Marvel’s sojourn into its cosmic realms was a decidedly risky move. After all, nobody – hell, not even many comic book fans – had even heard of the Guardians, and there certainly was no pestering clamor for them to make a big-screen appearance, and most definitely not in their own movie! Yet, here they are, delivery space-opera adventure the likes of which nobody outside of Marvel’s dedicated hardcore fans would have expected. At the hands of small-time feature film director James Gunn (seriously, hunt down Slither, one of the greatest B-movie chuckles you’ll ever have – in the best possible way!) you’d possibly expect Guardians to have some minor charm or at the very least confusing sub-cult status at the end of the day, but what Gunn and his (inter)stellar cast have achieved here is nothing short of astonishing. 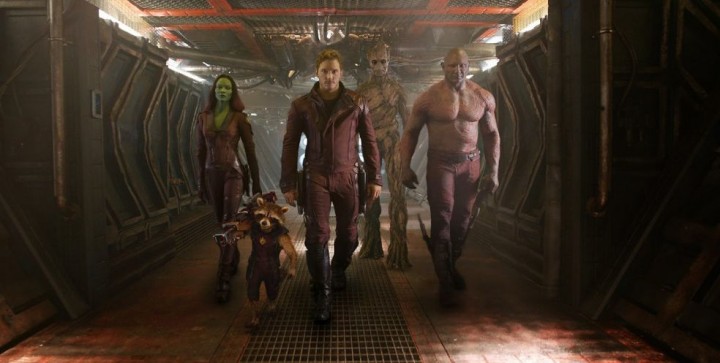 Plucked from Earth by a mysterious spacecraft on the day of his mother’s death, Peter Quill (Chris Pratt) grows up to become a member of a group of mercenaries known as Ravagers, led by Yondu (Michael Rooker). After he takes possession of a mysterious orb, which is hunted by Ronan The Accuser (Lee Pace), Quill finds himself with a bounty on his head. Quill becomes the target of a talking raccoon called Rocket and a walking tree called Groot (Vin Diesel), while the daughter of Thanos (Josh Brolin, uncredited), Gamora (Zoe Saldana) also hunts the orb to return to Ronan’s hand. After betraying Ronan, Gamora joins Quill, Rocket, Groot, and Drax The Destroyer (Dave Bautista) in prison, where they decide to take the orb to sell to the highest bidder. Upon escaping the prison, the newly formed Guardians learn that the orb is one of the powerful Infinity Stones, which are sought by Thanos to control the Universe. Desperate to keep the Stone from Ronan and Thanos, Quill and his friends decide to take it to the Nova Corps, a force of galactic police who will protect it from those who would seek to do ill with it. With Ronan pursuing them, and each with their own agendas, the antagonistic Guardians not only have to overcome their personal issues and band together, but fight the incredibly powerful forces raging against them. 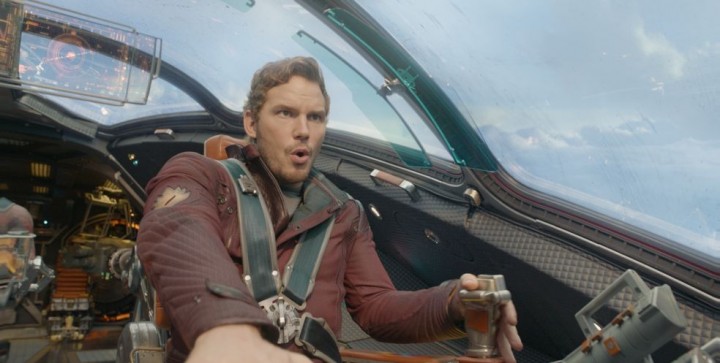 Okay, I’ll bite – I’d never heard of the Guardians prior to this film being announced, and I’d been reading comics for about twenty years. That said, as soon as I had heard about this film, I tried to locate as many back-issues and crossovers as I could in order to get to know what on Earth this crazy film was going to be about. Suffice to say, I was impressed. Although I knew next to nothing about Marvel’s “cosmic” comic range, featuring universe-obliterating luminaries such as Thanos (whom I did know, thanks to his ubiquitous position as one of the Marvel universe’s central villains), The Silver Surfer, Galactus (so wronged in that Fantastic Four movie, I might add), Death and Oblivion, and the Living Tribunal, among many others, I came to understand the importance of the Guardians within Marvel’s larger-world context. A band of rag-tag villains, heroes and shades of grey, the Guardians were something of a go-between for human readers to associate with in the context of universe destroying stakes faced each and every week in the pages of Marvel’s cosmic comics. I guess (hindsight being that wonderful mechanism of ironic wit) you could argue that the Marvel Cinematic Universe needed a group like the Guardians to come along – even in spite of Thor’s trans-galactic sojourns between Asgard and Midgard – in order to deliver the payoff of having Thanos arrive (at a film in the future!) to combat the Avengers and finish off Phase Three. Guardians Of The Galaxy was a risky move, a risky movie, but one that would pay off if done right. I can’t say James Gun would have been my first choice director for this film, and as I type that I’m currently cooking up a huge slice of humble pie, but to say that Guardians‘ success as a Marvel film, let along a film of any kind, is due to the quality of the writing, casting and direction, would be an understatement of Thanos-sized proportions. 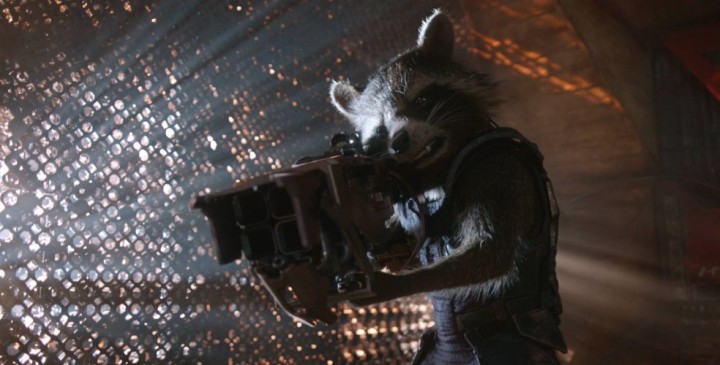 Call me a rat again. I double-dare ya!

Some people just want to know about a film based on a comparative statement, a lot like “Indiana Jones In Space” or “Jaws On a Train” or some such crap. Guardians falls into that unique grey area of not being much like any previous film before it. It’s got hints of genre films such as Star Wars, a bit of Blade Runner, plenty of Indiana Jones (Peter Quill seems to have the Han Solo act down solid) and a smidgen of wry, modern-hip humor that plays well into the seat-of-the-pants storytelling on offer here. Guardians is a blast, from start to finish; although, I should add, that start features a young Peter Quill watching his mother lose her battle with cancer, so perhaps not a total blast. But the rest of the film is a ripping yarn of cosmic consequence, and for the first time we finally get the Infinity Stones in full focus, instead of the periphery they’ve been in since the start of the MCU. A glorious sequence featuring Josh Brolin as Thanos, the Mad Titan, gave me chills, knowing that eventually, he and the Avengers would meet head on (and will, in the multi-film epic announced by Marvel as Infinity War, towards the end of this decade. It’s a long game, sure, but I imagine it’s so gonna be worth it. The gaps in the previous Marvel films are starting to fill in, as the lines between the events on Earth featuring Loki, Thor and Tony Stark and the ones in this film start to tie into each other in wonderful, eventful ways. 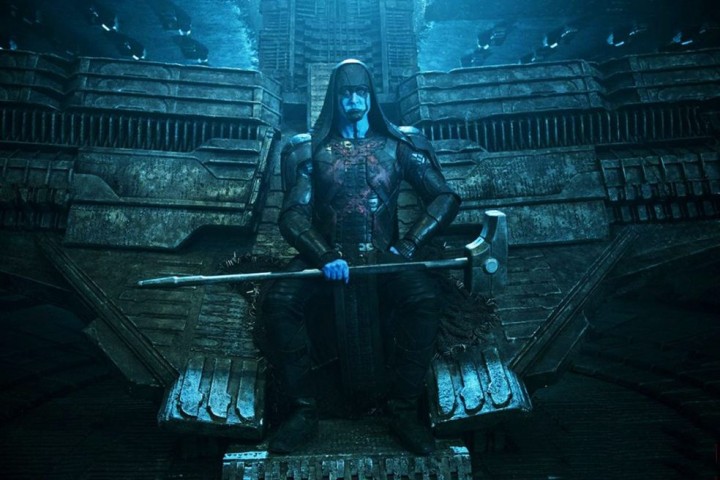 What Peter Jackson dreams about.

Key to this film working as well as it does is the writing and the casting, both of which absolutely nail the comics in the brief association I’ve had with reading them. Okay, so Bradley Cooper wasn’t the voice I had in my head for Rocket Raccoon, but he won my over with his gruff, emotive portrayal. Vin Diesel’s Groot seems a little too close to his Iron Giant for my linking, but since nobody even saw Iron Giant anyway, nobody will care. Groot is perfectly realized on the screen. Chris Pratt, who apparently is quite good in Community, is a delight as Peter Quill, a quipping, slack-jawed yet committed human man trying to make a go of things in deep space. Again, he’s kinda like a mix of Han Solo (without the sardonic charm), Firefly’s Nathan Fillion (with the sardonic charm) and a huggable man-child, and as our entry point into the film, he needed to be the most approachable. Pratt’s sense of timing in his delivery of the humor is spot on, and he knows he should always have a glint in his eye while engaging in all this galactic derring-do. 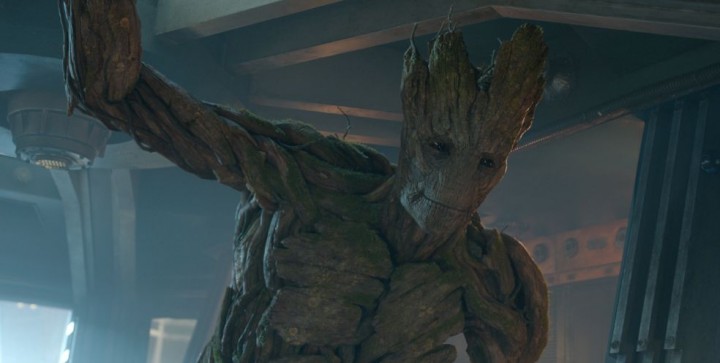 Co-stars Zoe Saldana is all greeny-sex as Gamora, Quill’s chief nemesis early before becoming an ally, while Dave Bautista has some of the films best lines (and there are some crackers sprinkled throughout!) as Drax The Destroyer, whose mission is solely to kill Ronan, the man who killed his family. Lee Pace chews the scenery as Ronan, looking a far cry from the perfect elfin specimen he plays in The Hobbit, and Michael Rooker apparently gets a joke nobody’s telling as Yondu, the blue-hued Ravager leader who both loathes and loves Quill. Smaller roles to John C Reilly, as a Nova Corpsman, and Glenn Close, as the leader of the Novas, and former Doctor Who starlet Karen Gillan (as Gamora’s adopted sister Nebula) make up a rocking roster of performers who deliver their lines with aplomb, conviction and realism. Djimon Hounsou has a main cast credit, but his appearance is about three or four seconds of “this could be anyone”, so that’s a bit of a waste. This is a film which lives and dies by the conviction of its actors, and nobody, not one, puts a foot wrong here. 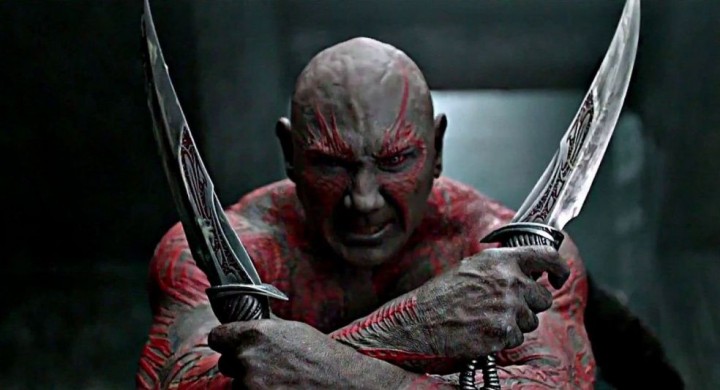 Yeah, you don’t wanna piss this guy off.

The script delivers plenty of sweet, sweet moments. Written by Nicole Perlman and James Gunn, there’s a huge laugh-to-minute ratio here that I admit I wasn’t expecting. It’s easily the funniest Marvel film of the Avengers run thus far, led primarily by the wisecracking Rocket, and the atypically linguistically verbose Drax (Bautista gets it, he really does), and throughout even the direst of moments there’s a snarky wit that will bring a smile to even the most jaded comic book fan. It doesn’t come at the expense of character development, though. While you could look at the poe-faced exterior of the deadly serious other 2014 Marvel film, Captain America: The Winter Soldier, and find enormous contrast with the overall tone here, there’s just as much love put into the characters of both films and that’s a testament to how much Marvel cares about its end product. I guess the further away from Earth you get, into more cosmic areas of conflict, the funnier you start to find things, right? 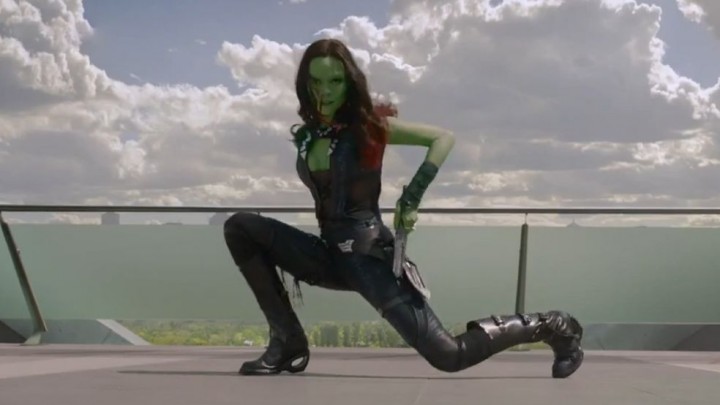 Is NOW really the best time for a calisthenics class?

You’ll be hard pressed to find a better, more entertaining film than Guardians of The Galaxy from 2014’s glut of releases. On balance, the fun and energy of Guardians’ zesty, punchy dialogue and epic production design and scope, more than make up for any possible negatives. I can’t think of anything truly bad about this film, although if there is a point to be made, it’s perhaps that non-Marvel fans – or non-comic book fans in general – might find this “world” a little hard to access within the framework of an (until now) primarily Earthbound hero-franchise. I think the sheer fun of the film’s characters and story will overcome any of these shortfalls. Guardians Of The Galaxy is a bolt from the blue, a lightning-in-a-bottle success story that reinforces the notion that audiences will go see films that are big on character and plot, even if they might be somewhat unfamiliar. The blockbusting success of the Guardians’ theatrical debut paves the way for marvel to do practically anything they like now. Audiences are won over, and the only way is up. If you haven’t seen Guardians of The Galaxy yet, you should do so. Immediately. It’s terrific.