Director :  Patrick Hughes
Year Of Release :   2014
Principal Cast :  Sylvester Stallone, Jason Statham, Antonio Banderas, Jet Li, Wesley Snipes, Dolph Lundgren, Kelsey Grammer, Randy Couture, Terry Crews, Kellan Lutz, Ronda Rousey, Victor Ortiz, Glen Powell, Robert Davi, Mel Gibson, Harrison Ford, Arnold Schwarzenegger.
Approx Running Time :  126 Minutes
Synopsis:    The Expendables are back in action to thwart the plans of a former ally-turned-arms-dealer, as he attempts to finally defeat the team once and for all.
What we think :  Incomprehensibly loud and obnoxious, the third Expendables movie delivers more of the same, only with slightly less blood. If you’ve enjoyed the franchise this far, this one won’t disappoint; Stallone and Co deliver another blast of rock-choppy gunplay and chest beating machismo, delighting in the pure idiocy of it all while having a great time. Ex 3 isn’t a great film – hell, by any standards it’s utter crap – but it does exactly what it says on the box.

Stallone’s Expendables franchise was one of those fanboy wet-dream projects that came along at just the right time. For action fans, the idea of casting some of the 80’s and 90’s biggest names in the genre together in one film satisfied the salacious blood-sport dream long thought impossible. For a while, Stallone had languished in cinema purgatory, until re-appropriating his worn-out image with a reboot of Rambo and Rocky. Arnold Schwarzenegger returned to the big screen after a long lay-off governing California. Most of the other stars, excluding Jason Statham, hadn’t had a major hit (or any kind of success) in the best part of a decade or more. With its brand of muscular machismo and the throwback to bloody days of 80’s carnage, The Expendables touched the zeitgeist for rose-colored reminiscence of a simpler time, before our heroes got all weird and angsty. The sequel (the inexplicably uninteresting title of Expendables 2) delivered more, only louder and sillier (although equally as fun), and so the inevitable threequel was destined to try and go even further in testosterone-fueled gratuity and inanity. Then word came that E3 would be aiming at a more family-friendly PG13 rating, as different from the first two films’ R rating – something franchise fans were against. The lack of an “edge” with a PG13 rating would mean much of what made the first two installments successful might not be possible with a third, leaving some to ask whether the franchise was fast becoming redundant against the slew of similarly PC-friendly action films released every week. 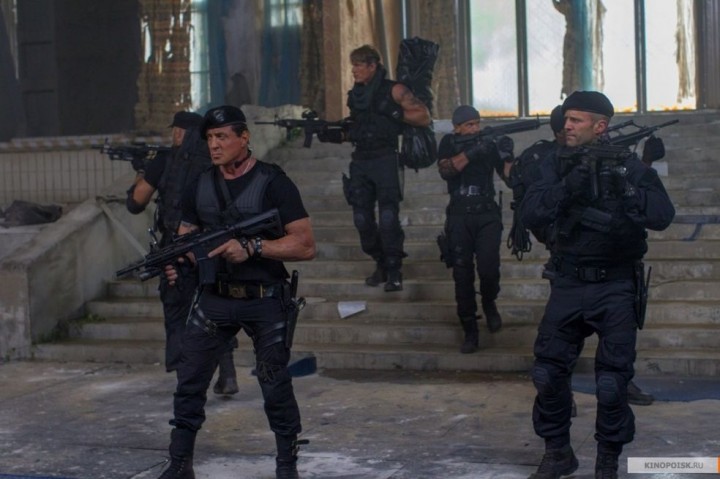 Hey lads, did any of you bother to bring some bogroll? 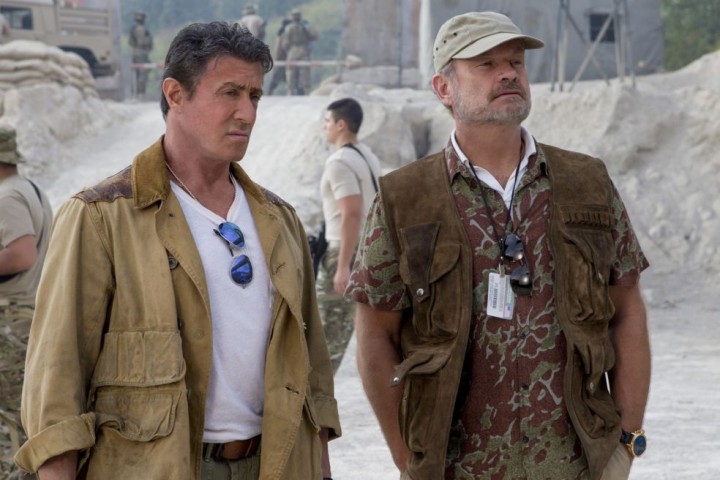 This wasn’t the African safari either of them expected.

I’ll make no apologies: The Expendables franchise gets me right in the childhood. Tapping into the cool factor of seeing screen action heroes up on the screen together, Expendables 1 through 3 remains either anathema to cinematic fanboys, or, like me, a wild ride for which I’m eternally grateful Stallone managed to do it. Love them or not, there’s no denying the vicarious thrill of seeing Stallone, Arnie, Harrison Ford, Mel Gibson and freakin’ Antonio Banderas in the same damn film – man, the cast of this one alone is enough to make an 80’s action junkie like me go weak at the knees. Backing up from the utter insanity of Expendables 2 (which, let’s face it, didn’t have a high water mark to start with!), Expendables 3 is a punch-in-the-face explosion-fest that delivers more of what you want when you buy a ticket to see this thing. If you never liked the series, this film ain’t gonna change your mind. It’s sweaty, pulsating action at its gratuitous, laws-of-physics-defying best, all captured with impressive acuity by the camera of director Patrick Hughes. 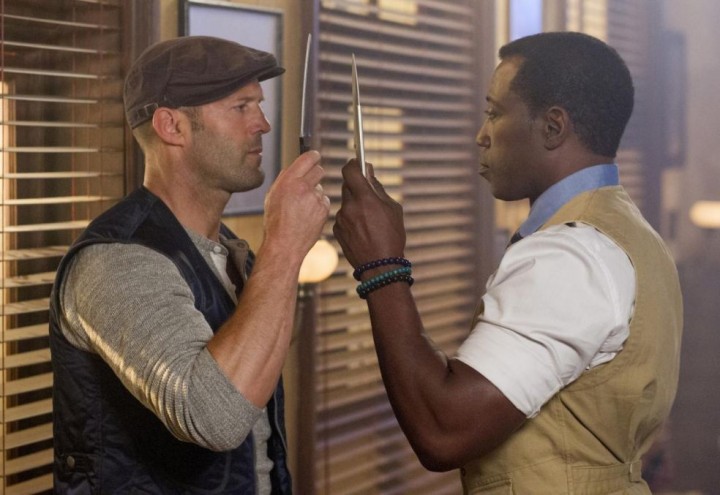 Okay, so I’m biased, but Expendables 3 is actually a pleasing, engaging action film that’s light on depth and hard on action. No, it’s not R-hard, but even in light of its controversial PG13 rating this film delivers plenty of body-slams, gunfights and carnage, all cut with a razor so sharp that you don’t miss the excess gore or blood at all. Having now watched it, I’m still surprised it actually made a PG-13 rating – there’s enough death and carnage here to certainly warrant an R! Stallone’s gruff, rumbling vocals once again are almost incomprehensible to all, Mel Gibson’s patented “crazy eyes” act is given free reign here, and for the first time in about a hundred years Harrison Ford doesn’t look utterly bored out of his skull with a role; Ex 3 is fast, fun and thrilling, a terrific third act to this franchise thus far. 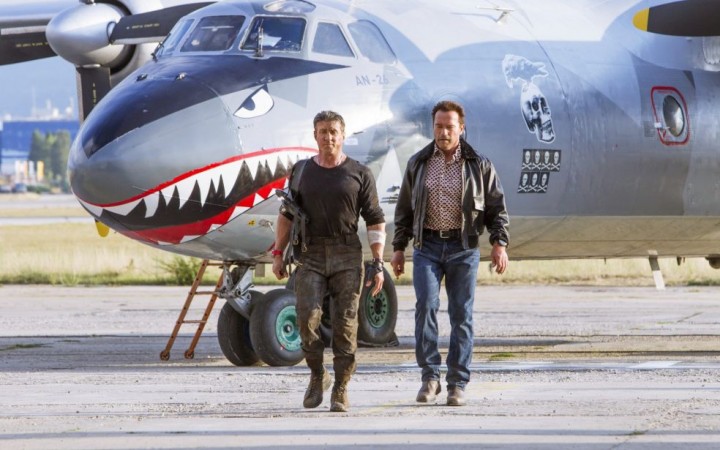 It had been a long trip, but Sly was glad he’d be able to walk away from Governor Arnie very soon…

While the story has plot holes large enough to drive a truck through several times – for instance, why would Stallone dump his “old” team, hire a “young” team, and then go on the mission himself, as well as engaging the services of fellow “old timer” in Antonio Banderas’ character? Damn, that’s just stupid! – and the acting would be hard pressed to make it into a daytime soap with any conviction, the film is entirely about the action. The gung-ho masculinity of the teams as they get about doing their Expendable thing leeches from the screen – even newbie Ronda Rousey, who hails from the MMA arena much like “acting” counterpart Gina Carano, exudes a charismatic musculature that overrides her femininity – and when the explosions happen (and they happen often) there’s little time for nonsense. Stupidity rules here, as logic and the laws of physics are thrown out the door (along with sense and reason) but it’s all done in such a way that it feels like a roller-coaster of action, peaking and troughing at just the right times to elicit the squeals of delight that comes with watching these movies. 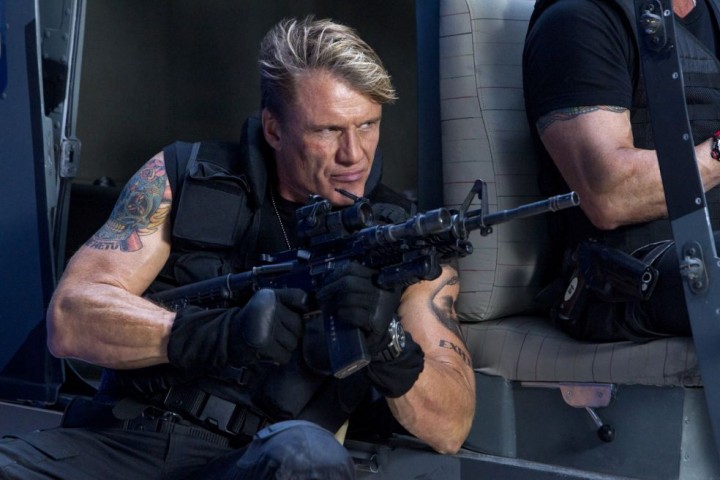 Patrick Hughes, whose main claim to fame for me was his direction of Aussie “Western” Red Hill, has a ball behind the camera. His camerawork and editing, as well as his ability to string together numerous interweaving action narratives (the final act blow out sequence is dynamite indeed!) is brilliantly accomplished. His command of the frame and how to fill it with cool looking action-stuff is up to the challenge of maintaining the tone set by the previous two films. This film is nothing if not loud, almost mind bogglingly so. Brian Tyler’s thunderous (and I mean thunderous!) soundtrack is dynamic and appropriately somber when required, while the audio mix for the action is frenetic, hugely directional and thoroughly enveloping. It’s been a while since I’ve heard a film sound so completely all-encompassing in terms of its sound mix. It’s the kind of film that actually out-Michael Bay’s Michael Bay, if that’s possible. 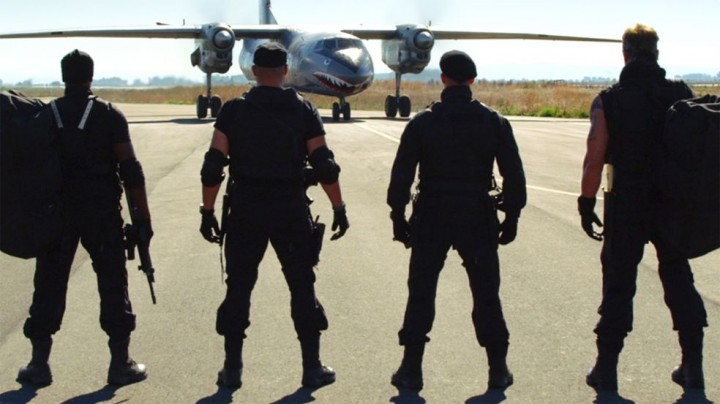 The acting, as I mentioned earlier, is generally poor, but then the script doesn’t exactly demand much from its performers. Hughes recognizes this and just gives each actor their chance to shine (an early line about Wesley Snipes’ recent incarceration – paralleled within the film itself, which made me LOL – is prescient and humorous, showing that none of this cast take themselves too seriously!) and deliver their trailer-worthy dialogue before showering then in battle detritus. Stallone is still the heartbeat of this film, and he’s on song again, while newcomers Mel Gibson and Kelsey Grammer are fun, and the regulars – Statham, Crews, Couture et al – are merely window dressing on this extravaganza of excess. The “newbies”, Kellan Lutz, Victor Ortiz and Glen Powell in particular, offer little to the film other than just more bodies to account for in the packed-house finale, and one gets the sense that if Stallone and Co were trying to “pass the baton” here, it didn’t work out as well as they’d hoped. Antonio Banderas steals the show with his skitterish Galgo, a verbose Spaniard who just wants to “kill people”, because that’s what he does “very very well”, and he draws most of the laughs through the movie for more than just a cool line of dialogue. Schwarzenegger manages to get two lines about “getting to the choppah” in (I clapped both times, SML), while Harrison Ford’s approach to the departed Bruce Willis’s role of CIA liaison is just to smile a lot, sound chipper, and know you’re about to get “into the shit” with the rest of the cast. 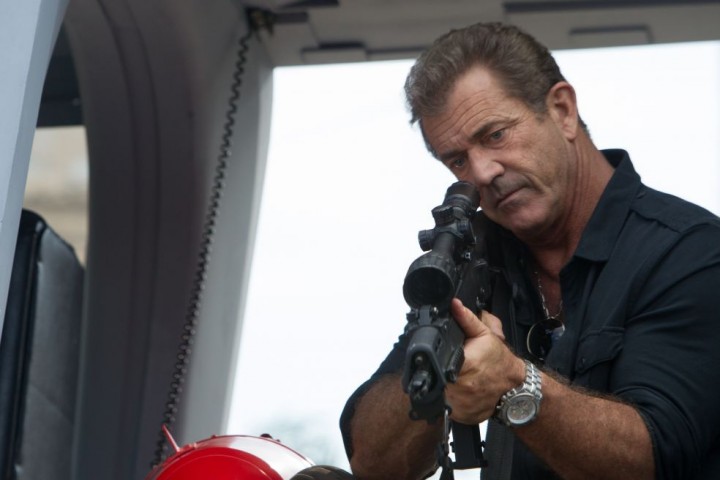 This one is for my ex-wife.

Honestly, Expendables 3 was a blast for me – just like the previous two films – so I guess if that’s the most telling aspect of it all, you’ll know well beforehand whether you’ll enjoy it or not. It’s easy: if you watched Expendables 1 or 2 and liked them, you’ll find little to complain about here. If you felt the franchise didn’t live up to what you expected, or just outright detested the very idea of what Stallone was trying to do, you’ll want to avoid this film. Expendables 3 is pure eyeball candy that sideswipes the intellect and drives itself right into the vicarious pleasure centers of the brain, guns a-blazin’. Loud, brash and utterly insane, Expendables 3 is a riot.