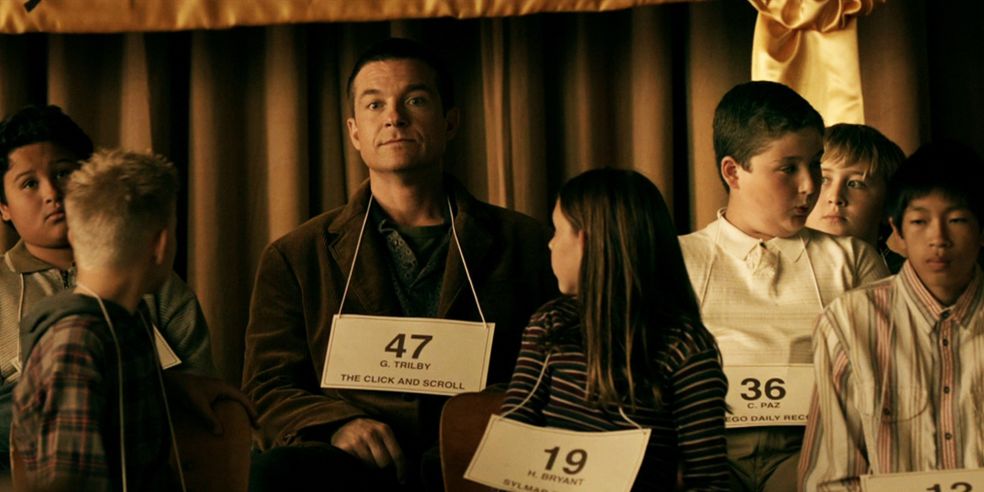 Don’t look at me.

I’m not a big one for spelling: frankly, if it wasn’t for spell-checker, this website would probably be damn near unreadable. Or at least less than it is now! One of the most obscure-yet-popular “sport” in America is the good old fashioned spelling bee, competitions to determine who amongst the youngest and brightest has the best vocabulary and knowledge of the English language. Major Bee’s are broadcast on television, not bad for an event where its a bunch of kids standing about spelling words so obscure it’s surprising they even exist. Yet, people are enthralled with it – the Bee’s have become a cutthroat competition across America, the prestige and acknowledgement sought by all manner of wunderkind and their parents. Bad Words, a film directed by, and starring Jason Bateman, is set in and around one of the country’s most prestigious of the Bees, the Golden Quill, and to be honest, I don’t think I’ve had so much fun watching one man be such an asshole as Bateman’s character is in this one.

Guy Trilby (Jason Bateman) is a 40 year old man who has taken it upon himself to enter into children’s spelling bee competitions. Exactly why, isn’t clear initially, although he appears to hold a grudge against somebody for something, and is using a sneaky loophole in the bee’s participation laws to enable himself to be entered. Trilby is followed by internet reporter Jenny Widgeon (Katherine Hahn), who is following him around trying to uncover the mystery as to why a grown man would want to upset a bunch of children in what is, typically, a children’s competition. Trilby’s main focus is on gaining entry into one of the country’s most prestigious Spelling Bee’s, the Golden Quill, presided over by Bernice Deagan (Allison Janney), and owned by Dr William Bowman (Philip Baker Hall). Naturally, the parents of Trilby’s fellow competitors are outraged than a grown man can enter into a children’s competition, and although Deagan tries to have Trilby fail in his quest to win, Triby overcomes her hurdles. Trilby also meets and befriends fellow competition entrant Chaitanya Chopra (Rohan Chand), a young Indian boy whose father and mother appear to be absentee parents. Even though Tribly’s behavior to everyone around him is utterly deplorable by any social standard, Chopra ingratiates himself into Trilby’s life, and eventually forces him to confront what it really means to gain his revenge.

Bad Words is a hilariously black comedy, the kind of subversive humor found in fellow “Bad” films such as Bad Santa and Bad Teacher. The trifecta (discounting Bad Grandpa) of Bad films is complete now, with Jason Bateman’s debut film directorial stint turning out to be one of the most pleasantly unpleasant experience I’ve had all year. The entirety of the film’s humor is derived from Trilby’s fractious personality and constant belittling, insulting, degrading humor, and the way in which he points his barbs in everyone’s direction, children or adult. Trilby is a complete asshole, a jerk of the highest order, although his motivation for doing what he does in this film is actually a nice little mystery that unspools gently throughout the film. With Bateman’s straight-faced performance of the hugely abrasive Trilby, as well as the winning cuteness of kid-star Rohan Chand, Bad Words is at a comedy level of “deep guffaw”, probably only one step below “gut busting”, although I did have to hold my sides in at times from laughing so much. A sex scene between Tribly, and Katherine Hahn’s ineffectual reporter, Jenny, is one of the true highlights in a film filled with wit and – dare I say it – charm.

Making an audience like a character who’s a complete social monster, the kind of person you’d never associate with under any circumstances, is a tricky proposition. Trilby’s main charm is in Bateman’s performance, giving the obnoxious character a warmth and underlying humanity that makes us question why somebody would do what Trilby is doing. Through this, we access the emotional content of the film, namely, the resolution of Trilby’s mission to win the Golden Quill and stamp his name forever on the competition. Both Jenny and Chopra are at opposite ends of Tribly’s emotional radar – Jenny is, to him, a nameless means to an end, while Chopra becomes something of a pivotal moment in the film’s finale as – and I don’t think I’m spoiling too much in revealing this, because it’s obvious at the outset where the film is going – both he and Trilby end up in the final face-off to determine the winner.

Andrew Dodge’s script doesn’t pander to audiences expectations, although given the central premise there’s still plenty of traditional “sport movie” metaphors and cliches embedded within the concept. I found the dialogue to be natural, not unexpectedly abrasive and raw, and utterly adult (at one point, Tribly pays a hooker to show the kid her boobs, so the film isn’t scared to cross several boundaries of good taste), yet even in the face of Triby’s utter asshole-ness, Bad Words retains a warmth and care within it that keeps it from just being an outright nasty pile of crud. It’s a likeable screenplay, a sardonic sense of nastiness that comes from a good place (I think), instead of just an outright nihilistic desire to be cruel.

What surprised me most was Bateman’s direction. The film has a surety and fearlessness about it, derived from Bateman’s use of the camera, his color palette (the film is primarily toned with browns and soft colors) and the fact that he doesn’t feel obligated to explain everything that’s going on. Doubtless, a career spanning some 30 years has helped him gain a knowledge and appreciation for what happens behind the camera (probably a lot like Clint Eastwood), and if there were any nerves about being the guy yelling “cut” it doesn’t show. Kudos to Bateman for delivering a film with such style, care and craftsmanship. If he continues like this, I’m more than happy for him to take a back-seat to on-screen work.

Jason Bateman’s Bad Words might just be the funniest film this year. It tickled all my intellect buttons, and genuinely made me laugh out loud, something many purported “comedy” films fail to do. It’s the writing and performances that nail this one, not any slapstick or ribald gross-out stuff; Bad Words is gross when it needs to be (Trilby berates a mother at a diner with references to her vagina in ways I cannot possibly repeat here, they’re so off color – but hilarious!) but in the end its warmth and sense of placid, understated humor wins out. Genuinely a funny movie, this is one well worth checking out.