Director :  Wes Anderson
Year Of Release :   2014
Principal Cast :  Ralph Feinnes, Tony Revolori, Adrien Brody, Willem Dafoe, Jeff Goldblum, Saoirse Ronan, Edward Norton, F Murray Abraham, Methieu Almaric, Jude Law, Harvey Keitel, Bill Murray, Lea Seydoux, Jason Schwartzman, Tilda Swinton, Tom Wilkinson, Owen Wilson, Bob Balaban.
Approx Running Time :   99 Minutes
Synopsis:  A concierge teams up with one of his employees to prove his innocence after being framed for murder.
What we think :  Just a pure, candy-coated delight. There’s little more I can say about this film without descending into unadulterated, unfiltered superlatives; look, Grand Budapest is the kind of film I wish I could make, and I desperately wish there were more of, it’s so good. If you only see one film in 2014, make sure this one is the one you see right after that. Utterly brilliant.

I’ve been to Budapest. This is far better.

Watching films can be a cathartic experience. Sometimes, wading through all the crap ejected from the sphincter of Hollywood’s lower echelon one might stumble upon a hidden gem, a hitherto unheralded masterpiece for which universal acclaim is not only expected, but deserved. Typically, however, one must look externally of the Hollywood Mainstream for a better chance of quality film-making, at least in terms of non-action genres. Independent storytellers are less constricted by commercial demands (but not always),and often deliver “passion” pieces (for want of a better phrase) that work irrespective of mainstream audience expectation. Wes Anderson has been delighting film lovers for years, much like his contemporaries the Coen Brothers, with obscure, laconic, often kooky films that definitely do not fall into the category of “mainstream”. Folks who have enjoyed Rushmore, The Life Aquatic, The Darjeeling Limited and Moonrise Kingdom, for example, would be well suited to appreciate the nuance and delicacy with which Anderson crafts his stories, and Grand Budapest Hotel is no exception. Given that I have yet to tap into the complete Anderson oeuvre to-date (sorry, Wes) I can’t say for sure whether this film is his most accomplished work or not, but I can say one thing with absolute certainty: The Grand Budapest Hotel is one of those films that were it to come out of the Hollywood production line, might very well be missed or avoided (probably the latter more often, more’s the pity) but it really does deserve your time and attention. 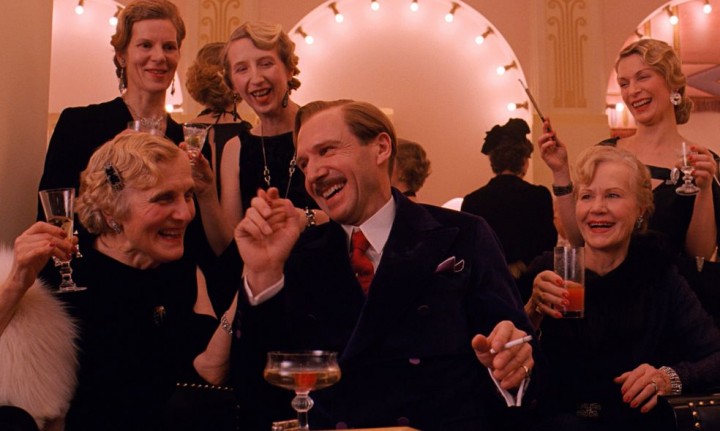 Imma take all you bitches back to my room in a minute, okay?

Located in the fictional Republic of Zebrowka (somewhere in Eastern Europe, I’d wager!) sits the majestic Grand Budapest Hotel, a Kubrickian monolith which once served the rich and famous of pre-war continental society, and a hotel owned by one Monseigneur Gustave H (Ralph Feinnes), an effeminate philanderer who used his position as the hotel’s concierge to dally with the female guests. Gustave H takes under his wing a young immigrant boy, Zero (Tony Revolori), teaching him the business of serving people; Gustave’s philandering ways come to haunt him, however, when he is accused of murdering an elderly aristocratic woman, Madame G (Tilda Swinton), by the local mafioso family, led by Dmitri Desgoffe und Taxis (Adrien Brody). Imprisoned, Gustave H uses his connections inside the gulag to form a plan of escape, aided by the impressionable Zero, who has fallen in desperate love with local baker girl Agatha (Saoirse Ronan), while being pursued by Dmitri’s thuggish henchman, Jopling (Willem Dafoe), as well as local police chief Henckels (Edward Norton). To prove his innocence, Gustave and Zero must locate the traitorous member of Dmitri’s family, Serge (Matthieu Almaric), and maintain possession of a fabulously expensive painting. 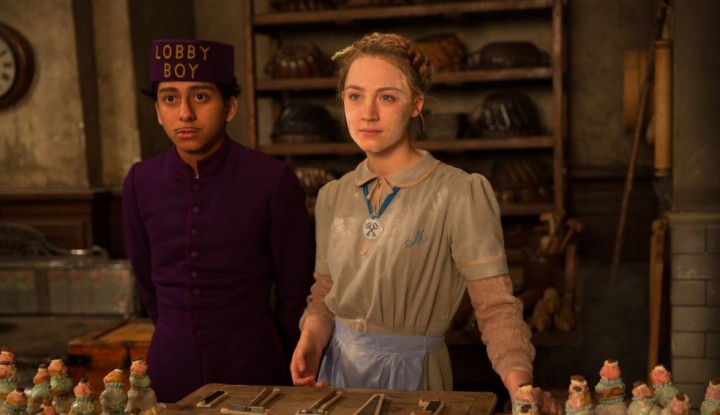 Those of you who insist on scrolling to the bottom of my reviews to check out my rating will be well advised to stop reading this review now if you’ve noticed my concluding score already. I mean it, just stop now. If you’re one of those poor folk who have yet to witness Grand Budapest’s charms, can I urge you to simply take my advice to go watch it immediately, without reading any of this review, and soak it all in. It’s a glorious thing, this film, and I would hesitate to say it’s easily one of my favorite films of the last 12 months or so – in terms of pure entertainment, free of gilded dramatic award-baiting or blockbusting hocus pocus, The Grand Budapest Hotel is simply one of the most enjoyable experiences watching a film I’ve had in a very, very long time.  Those of you who have seen this film will already know what I’m going to say about it. 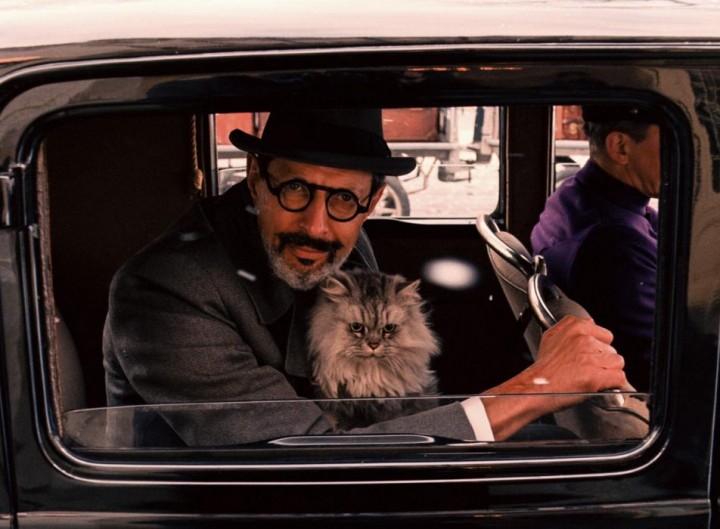 A man with a pussy in his lap.

There’s little about this film that doesn’t work; from the cast, the music and cinematography and the beautiful direction of everything by Wes Anderson, The Grand Budapest Hotel delivers a cinematic explosion of sugar, spice, and all things nice, within the confines of a 90-odd minute movie. The story is as bare-bones as you could imagine, and truthfully, the film isn’t very deep dramatically, but with a lilting, comedic tone and a whip-smart screenplay (by Anderson himself) there’s no room here for anything other than sugary sweet delight. Like a box of chocolates, I didn’t know what to expect when I settled in to watch this, aside from the glowing critical praise the online community had afforded it. I hadn’t even found out what it was about, which is weird for me, and if I’m honest, I think not knowing the story actually made the film work so much better. Not that Grand Budapest is a film you will struggle with – it’s as superficially in-your-face in that farcical-theatrical kinda way, and there’s almost zero subtext most audiences need to worry about (there is subtext in the film, but it’s not essential you uncover it, is what I’m saying so poorly) and even though it boasts a cast many bigger-budget films might fantasize about obtaining, there’s little by way of ego-stroking or leading-man syndrome on display. 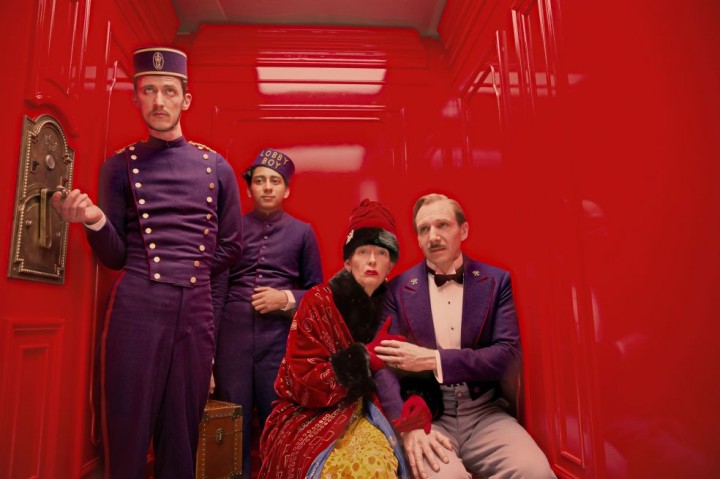 Ralph Feinnes leads this stellar cast (and I mean Stellar, with a capital S!) of Anderson alumni and newcomers, as he hurdy-gurdies his way through this impossibly hilarious tale of love, loss, murder and passion, all surrounding the people in a massive hotel which has – as established by “present day” bookends – fallen into hard times. The film is told in flashback, narrated at first by Tom Wilkinson’s elder Author, and then by F Murray Abraham’s elderly Zero, but the crux of the film is held together by two wonderful performances by Feinnes, as Gustave H, and newcomer Tony Revolori, as the younger Zero. We all know Feinnes can hold together a film with ease, the man is such a consummate star. But the real surprise is Revolori, who actually holds his own as Zero, in both comedic performance and ability to know when to let the rest of the cast do all the work. Revolori is hilarious throughout, a perfect foil for Feinnes’ Gustave, a man so in love with himself and in love with living that he almost overtakes the opening half of the film. Yet Feinnes restrains himself, letting the dialogue and minimal directorial effervescence do all the real heavy lifting here. That, and the rest of this magnificent cast. 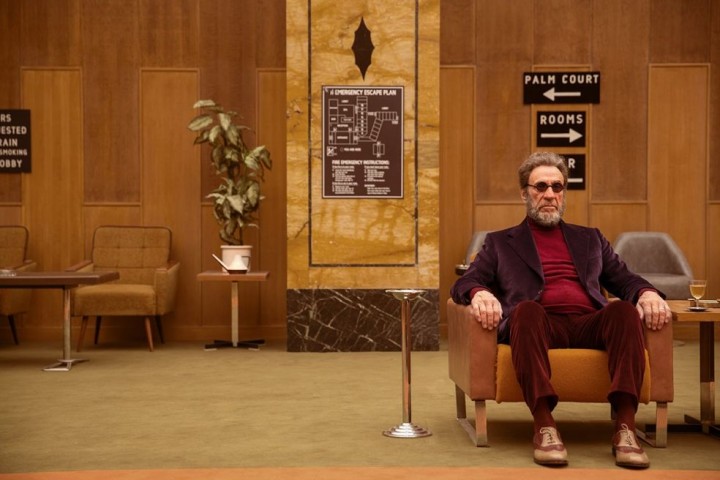 Just sittin’. Relaxing. Soaking in all the brown.

Frankly, seeing the faces who pop up in this movie is half the fun; it’s a real treat to see Adrien Brody act as devilish as he does here. Willem Dafoe plays the silent henchman role with that razor-sharp glint in his eye, and Edward Norton looks like he’s having an absolute blast playing up the fact that his character is an approximation of the Nazi SS (I won’t spoil the joke, however, but Anderson crafts a clever screen-pun out of this creation!), while Harvey Keitel steals his scenes as a fellow prisoner with Gustave inside the gulag. Sharp-eyed viewers will spot Anderson’s favorite actors parade here, with Owen Wilson, Bill Murray and Jason Schwartzmann all popping up in minor (but still hilarious) roles throughout. In fact, aside from Feinnes, Revolori, and the angelic Saoirse Ronan (as Agatha), the rest of the cast’s roles could all be described as “minor” to some degree. It’s what Anderson achieves in weaving the fun and comedy throughout each new character that prevents this thing from just toppling over. 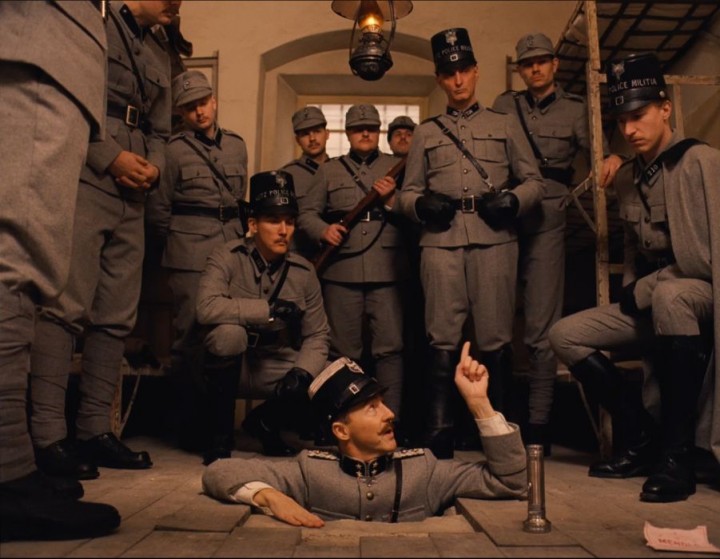 I swear to Christ Bob, you’d better not drop anything on my head when I go down this hole!

As sharp as the script is (and damn, this is one of the most amusing dialogue-driven films I’ve watched in aaaages), and as on-point as the cast are, the film would be nothing without Anderson’s technical prowess to carry it off. His editing, framing and production design are just glorious to watch, with his switching of aspect ratios and stunning color design probably the two big features I noted (for me, at least). While most of the film is shot in 1.33 aspect, Anderson switches between full scope 2.35 and 1.85 at differing times, as if to highlight a shift in time period within the film’s narrative – the 2.35 aspect is featured when the film shifts to the era with an elderly Zero, while the 1.85 aspect comes along at the open and close of the film. This shifting of aspects really creates a sense of whimsy within the story, and it serves to jolt the viewer into the story moreeso because of the expectation that aspect induces. And Anderson’s use of framing, particularly with the 1.33 aspect, is just gorgeous. The camera work involves a lot of pivot rotations, panning 90-degrees left or right as characters shift off-screen, and where this might become somewhat tiresome as the film progresses, Anderson keeps things moving along just fast enough to provide this technique with at least some story-point necessity. And the look of the film, thanks to DP Robert Yeoman, I’ll just say OMG now and that’s all. Wow, this film looks amazing. 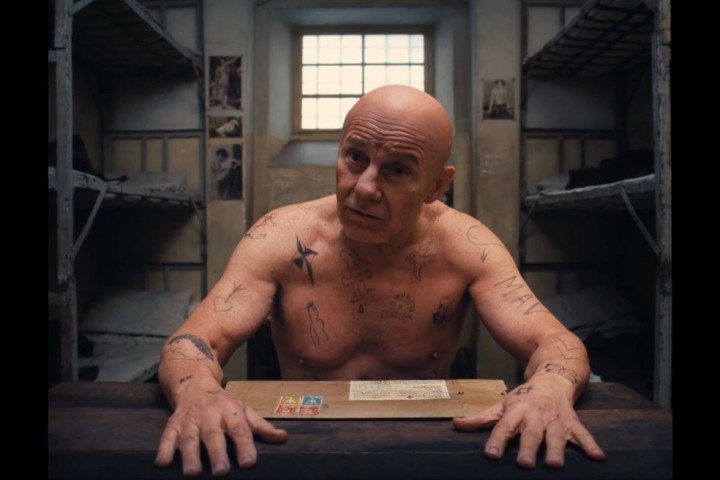 I could probably spend the next month of my life raving about this film, urging you to go watch it (if you haven’t already), and I lack the ability to adequately explain my giddy delight that such a film exists in the first place; The Grand Budapest Hotel isn’t a film you should ruin by spoilers, it’s not a film you should watch a bunch of Making Of’s before taking the plunge – you should just watch it cold, and savor it all. It’s like a great meal that delights with each new bite, or a fine wine that you will want to savor with every passing moment. As lacking in insistence as my urgings are, The Grand Budapest Hotel is one holiday destination I’ll look forward to revisiting time and again, for many years to come. Just wonderful.