Director :   Eugenio Mira
Year Of Release :  2013
Principal Cast :  Elijah Wood, John Cusack, Tamsin Egerton, Kerry Bishe, Allen Leech, Alex Winter, Don McManus.
Approx Running Time :  90 Minutes
Synopsis:   Returning to the stage after a five year absence, an acclaimed concert pianist finds himself in the gunsights of an assassin who wants him to play the concert of his life.
What we think :   While it staggers through an implausible mid-section, and doesn’t end with quite the flourish one might expect from a pulp-fiction thriller such as this, Grand Piano will hold your interest and maintain your excitement right up to the last frame – it’s the kind of film I wish Elijah Wood would make more of, just quietly, even though it’s a largely forgettable affair that never last long in the mind once its over. Director Mira wrings every nuance of potential (and then some) from the interesting premise, and – plot chasms notwithstanding – makes this film vastly entertaining in the B-movie style.

So you’re an acclaimed concert pianist? Think you know stress? The stress of performing some of the worlds most complicated and difficult piano compositions, usually to an agog audience who will know if you hit a bum note? Then you’re best off not watching Grand Piano, an exercise in thrills with the backdrop of sublime orchestral sonics and a deft touch of death. Grand Piano was described by my buddy Dan O’Neill as “Speed with an orchestra”, and while I think Dan became a little over-enthusiastic with his praise, don’t mistake my marginal disagreement with his assessment cloud the end product of this review – this is a film worth a look. There’s no Keanu Reeves, no exploding buses, or even sexy Sandra Bullocks anywhere to be found here, but what you will get is a terrific little set-piece that delivers some nice twists, excellent tension, and an exemplary example of how to bring a redonkulous plot, gasping-at-straws concept, and severely implausible characters together in a way that still grabs your attention for the time it lasts. If I was to come up with my own parallel for Grand Piano, it would be “Phone Booth at a piano”. Hmm, probably needed to think a bit harder about that. Still, the echoes of Joel Schumacher’s “single-setting” film resound here, as Elijah Wood is forced to play his piano during a concert, all to the tune of whatever dastardly plan the voice of John Cusack has in store. A man, manipulated by concern for his wife, with death imminent if he doesn’t play along with the villain’s plan, and who must also try and uncover exactly what that plan is before it’s all too late. Does Grand Piano hit any off-notes? Is it a film in a minor key? That, dear reader, is what we’re here to determine. 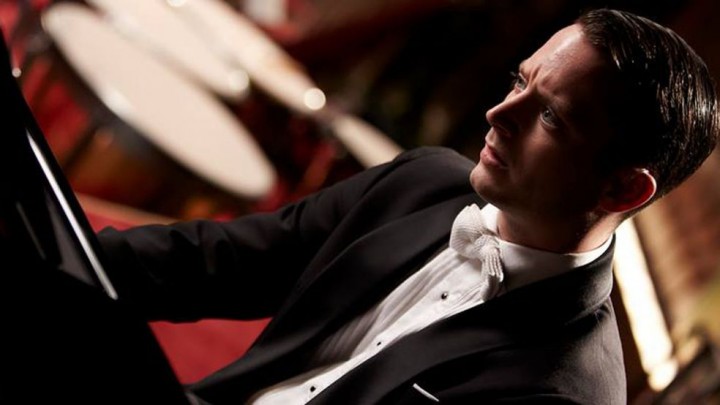 I’m gonna play the shiznit out of this piano.

Tom Selznick (Elijah Wood) is an enormously talented concert pianist. However, five years previous, he had a meltdown whilst trying to perform a nigh-impossible work for the piano, and retired from public life ever since. His mentor, Patrick Godureaux (Jack Taylor) has passed on, and the piano he owned (and the one at which Tom had his meltdown), is due to fly out of the country within days. Tom’s wife, popular actress Emma Selznick (Kerry Bishe – Red State, Argo) has organized a return concert for Tom on that very same piano; the concert is something he’s wary of, considering the ridicule and joke he became at the time of his on-stage meltdown previously. At the concert, he is warmly greeted by the orchestra’s conductor, Norman Reisinger (Don McManus), and takes to the stage to begin his performance. Shortly into that performance, however, he becomes aware that somebody has not only tampered with his sheet music, but also has a high powered rifle aimed at his wife, who is seated in a prime position in the auditorium. The voice (John Cusack) warns Tom that if he doesn’t play the final four bars of the same piece he previously had his meltdown over, and play them perfectly, he will kill Emma. Tom tries to contact Emma’s friends, Wayne (Allan Leech) and Ashley (Tamsin Egerton), but they are thwarted by the Voice’s assistant (Bill & Ted’s Excellent Adventure star Alex Winter – nope, I’m not kidding!), who is posing as an usher for the concert. As time runs out, Tom must act to save not only himself, but his wife and the lives of countless others within the venue – all without leaving his seat.

B-movie plots like this are painfully difficult to pull of with class. The trapped man-in-a-box scenario has been done almost to death, what with films such as Buried, Devil, Panic Room and Cube, along with the aforementioned Phone Booth, have all taken the premise of a single-setting film and run with it, with varying degrees of success. While I’d hesitate to compare Eugenio Mira’s film to Fincher’s Panic Room, the claustrophobic nature of the plot – a man at a piano having to play or die – resonates just as brilliantly with this film as it did with that one. Grand Piano isn’t as clever as probably any of those listed films, nor does it have the same polished, sparkly finish, but for what it attempts to do, it does really well. And that’s all one can ask, right? The script, a pule-pounding page-turner by Damien Chezelle, sets up the major players (save for Cusack’s “voice”, who never really has a backstory other than he’s the Bad Guy) and puts them all into position for maximum tension, papering over logic and plausibility with a rapid-fire refusal to sit back and wait for the audience to figure out what’s going on. Nope, Grand Piano offers little respite once the cracking plot point of aiming a loaded assault weapon at a concert pianist mid-performance kicks in.

A film like this hits or misses largely on the performance of its cast – if the plot falls into a chasm with silliness, the cast have to be capable enough to plow on through and try and keep things on track; Elijah Wood, as Tom, is convincing in his portrayal of a man facing public scorn if he screws up another performance, before reverting to pure terror when he realizes the true stakes of a potential screw-up. Wood always strikes me as an actor who, through his apparent refusal to age, lacks the ability to perform old, lacking the wisdom behind those brilliant blue orbs he calls eyes to be anything other than a mid-20’s surfer dude. He just looks too young! But, this aside, he’s excellent in the role, giving the ludicrous plot plenty of width to work the audience over with.

What are you saying, Frodo? You don’t want to go to Mordor? Screw you, pussy!

Wood is backed up by Kerry Bishe as his eye-candy wife, providing the focus of the Voice’s ire and bullet trajectory, adding the emotional weight to Tom’s predicament. The film doesn’t ever really seem to provide the film with quite the depth of relationship these two needed to sell Tom’s commitment to her safety, but it’s okay for what the story needs, I guess. Don McManus provides the bulk of the film’s humor, through his droll wit and apparent lack of propriety as the accompanying orchestra’s conductor. Allan Leech and Tamsin Egerton provide momentary humor and cannon fodder as friends if Emma’s, although neither gets any real depth and they exist purely as a stop-gap for the film to run an extra ten minutes or so. Grand Piano’s resident Bad Guy, John Cusack, gets to pull the anger out again; he doesn’t play too many villains on screen, and his performance in The Frozen Ground was one of the best parts of that movie, so to see him (or rather, hear him, since he spends about 90% of the film as a voice in Tom’s ear) go bad once again is refreshing indeed. It’s just a pity his character had zero motivation and depth – he’s just an angry voice in the film, offering little other than rage at Tom’s apparent lack of concern for his fate. 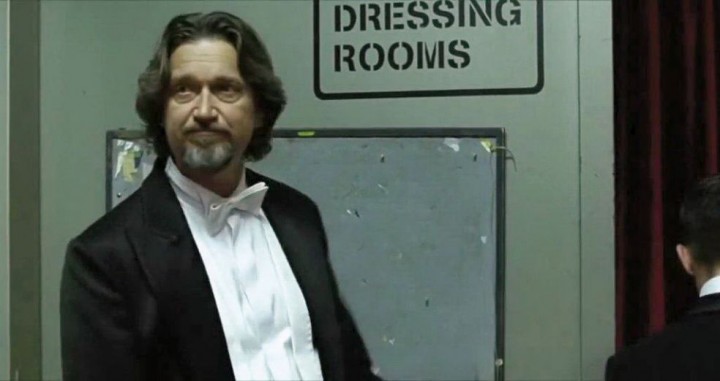 You guys have no idea who you’re messing with….

The film whizzes along at a rapid clip, deftly skirting “he did whatnow?” moments and “surely somebody would have figured it out by now!” exclamations from the viewer (unless you’re an old grump like me) as it races towards its inevitably confrontational conclusion. I have to admit to being a little annoyed that the film’s climax was yet another “people fighting in the light rigging above the stage” motif, because apparently the old “falling from a height at the climax of a performance” routine is just not cliched enough without doing it once more for the cheap seats, but kudos to Mira for making me at least give a shit by the time it gets there. The Maguffin for the film is rather silly, when it is revealed, and thankfully Mira never lingers on it long enough to make it a concerning item of criticism. About the only thing missing from this film to complete the trifecta of potential cliches (don’t communicate with your friends – ignored; don’t try and save your wife – ignored; do exactly what the villain says; ignored) is one of those “villain isn’t quite dead and wakes up” moments, although to be honest I was half expecting it.

Grand Piano isn’t quite the “Speed with an orchestra” my bud Dan made it out to be – but it’s still a bloody good film that delivers plenty of moments that will have you gripping the seat, either in terror or laughing your ass off with its insane plot. It’s a silly film that has so many logic missteps and plot contrivances going all at one it’s impossible to even think this could happen – in the realms of fantasy, it’s right up there as a classic. But it is enthralling to a large degree, helped by Eugenio Mira’s superbly tight direction, Elijah Wood’s commendable performance, and the film’s sheer brazenness in achieving what it does. Check out Grand Piano, I think you’ll have a great old time.