Director :   Paul Hough
Year Of Release :   2013
Principal Cast :   Paul McCarthy-Boyington, Eddie McGee, Trista Robinson, T Arthur Cottam, Brianna Lauren Jackson, Fred Coury, Noel Britton, J Louis Reid, Richard Gale.
Approx Running Time :   87 Minutes
Synopsis:  A group of disparate people find themselves forced to run to survive – breaking the rules means instant death.
What we think :  If you’re one of those people who enjoys films where people’s heads explode, The Human Race will be a must-see for you. Violent, kinetic, brutal blood-sport film delivers plenty of gore, blood and human depravity, although after a while the point becomes lost as it simply becomes a case of who’s going to be the last man (or woman) standing. The “twist” at the end is fairly easy to spot coming well early, which mitigates a lot of the “what the hell is going on?” feeling the film aims at throughout, but the tone and aesthetic indicates Paul Hough is a film-maker to keep an eye on. Definitely worth a look for gore-hounds and fans of low-budget horror.

A race to survive.

Let’s be honest here. Humanity is, in its current form, pretty shit. I mean really. We’re a bunch of douches all trying to get along with our fellow man, looping a giant ball of burning gas on a rock with finitie resources and complete lack of idea. The Human Race epitomizes the dog-eat-dog nature of humanity, when we’re up against the wall and it’s kill-or-be-killed, men and women suddenly become a base, survivalist animal, hell bent on continuing to breathe. I realize having such an existential opening to this review might be preparing you for a better film than you’ll find The Human Race to be, so be forewarned that this film isn’t intended to be some social commentary on where humanity is in terms of its value of life, rather it’s simply designed to shock, to gall, to make you uneasy as to where it will all end up. The concept is straightforward – or as straightforward as one of these gore-fests can be – and the execution of the concept is actually pretty decent, considering the budget and the no-name cast all doing their best in service of the admittedly fairly ham-hock screenplay. Put a bunch of people against each other in a form of combat, with the option of death if they refuse to fight/play, and watch the carnage ensue. Philosophical discussion aside, is The Human Race a film worthy of watching, simply from a violent, horror standpoint?

Wow, this party wasn’t what I expected!

A crowd of around 80 people suddenly find themselves transported from their every-day lives into a killing arena – a voice in their head tells them to run, to not deviate from the path, and only three locations within the course are “safe”. Do not go onto the grass, either, or you die. If you are lapped more than one, you die. Last person standing. Among the crowd of people are pregnant women, children, the elderly, the sick and handicapped, and, leading the charge, two military veterans who are trying to piece together the puzzle of how they got there, where they are, and what the hell is going on. As the crowd races each other around what appears to be a cordoned off suburb, the numbers gradually dwindle as those who cannot keep up fall behind, while the strong begin to prey on the weak and the fight for survival is on. Humanity falls apart as people kill each other simply to survive – but to what purpose; the truth about their scenario is more shocking than any of them could possibly realize! 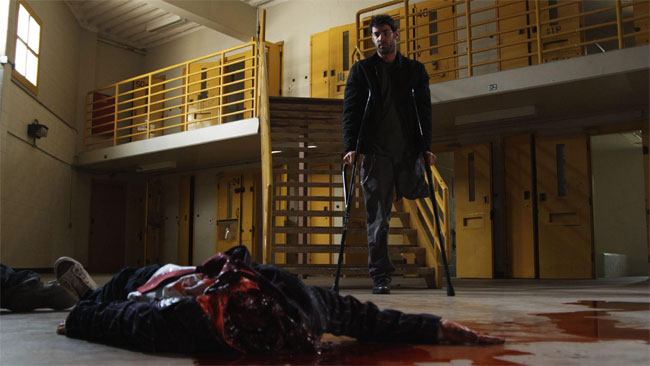 Getting the obvious out of the way first; The Human Race might very well be a student film for the level of quality in its plot and scripting. Characters are barely fleshed out beyond being canon fodder for the weight of death sequences to come – people die as their heads explode in all manner of gory, brutal detail, and if you’re into that kind of thing, you’ll love this. The premise of the film feels eerily similar to cult classic Cube, in that it’s a story designed to be filmed in a very small area, with death the only real escape for the “participants” of whatever cruel game this turns out to be. Whereas Cube has a low-level sense of ingenuity about it, The Human Race is simply a gaggle of people all running about trying not to have their heads explode. The who and why of their situation isn’t explained until the very end (would it be too spoilery to say that only one of the human cast survives to the end credits?) and this unraveling of the inherent mystery drives a lot of the films’ plotting. Throw in a not-so-subtle subplot about the depravity of people, and never knowing what evil lurks in the hearts of men (I stole that, sure), and this film barely registers a pulse in the story development department. 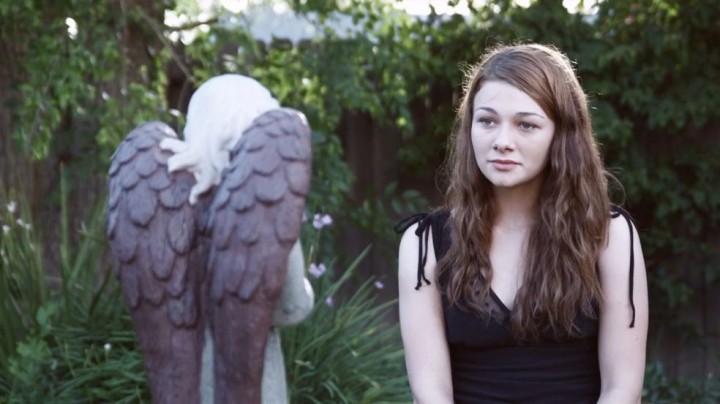 The cast are all nobody you’ve ever heard of. The two ex-army dudes we spend most of the film with are Paul McCarthy-Boyington, as Justin, and Eddie McGee (as Eddie), who looks suspiciously like the brother of Jeffrey Dean Morgan, both of whom have an easy going familiarity that isn’t far from being commendably believable. These guys are the drivers for the early portion of the film, as their moral codes kick into gear when the heads start exploding. They’re the ones who start to try and figure out what’s going on, even though in the long run it does little good. On the other side of the story are a pair of deaf people, a female (Trista Robinson) and male (T Arthur Cottam), who provide the majority of what passes for empathy in the film. Through their hand gestures and grunting (and plenty of subtitles) we are given the emotional balance the film tries to shoot for (it doesn’t quite make it, but it’s a valiant effort nonetheless), until gradually, as the film progresses, they are forced to resort to their own brutal, base desires for survival. The rest of the cast do their best, and those of you who complain that the acting isn’t that great should probably re-check the budget this film had and direct your complaints there. It’s a serviceable cast, at the very least. It’s certainly not awful. 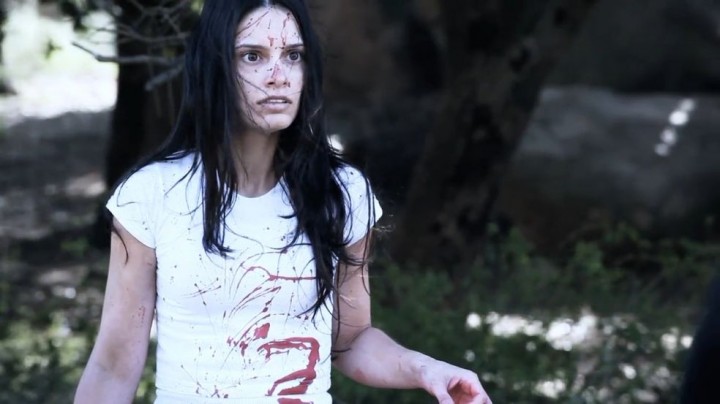 It’s all in the eyes, baby.

The Human Race survives the pitfalls of being a crapfest by throwing some really sweet deaths at the screen. All manner of heads explode, people skewer and eviscerate each other, and the eventual numbness one feels for each explosion of gore and fleshy viscera starts to become more bland and tedious. That’s not to say the film wears out its welcome, because I think director Paul Hough keeps just enough in his bag of tricks to prevent fatigue in this regard, but in the end the flashy camera tricks, flash-bang lighting (some of which may cause an epileptic seizure, be warned) and fancy focus effects are merely papering over the films’ inherent low-budget flaws. honestly, this worried me naught, because I think Hough’s style has plenty going for it – he just needs a larger budget – and I appreciated what he was trying to do, even if it didn’t always work. The editing, lighting and visual style of the film reminded me of Zack Snyder’s Dawn of The Dead, mixed with a gritty, urban Tony Hawk video, or even a Spike Lee sense of grungy, earthy realism. Hough isn’t afraid to show the blood flow, so gore-hounds should be relatively satisfied. 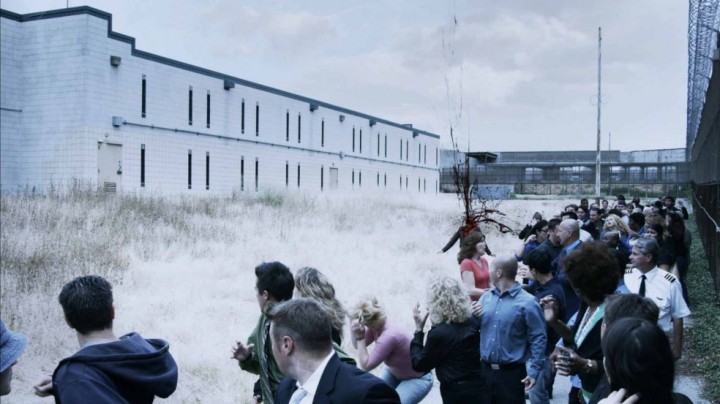 This should be the DVD cover.

This isn’t a terrific film, not by most standards. The story is poor on a really good concept (although one feels we’ve seen something similar before), and the movie has a definite low-budget sensibility. Does this make it poor film? Not at all, in fact it’s rather solidly put together, but don’t expect a Spielbergian styled, huge-budget extravaganza to unfold as things progress. For the resources Hough had to work with (apparently the film was shot over the course of 7 years, in bits and pieces, so one might say this is Hough’s Bad Taste?) I think the film works well, even if it’s a little rough around the edges. Sometimes, rough isn’t bad. The Human Race is violent, chilling and delivers a laughable twist at the end that hard-core cinephiles will probably spot a mile away, and some might argue it’s all show and no go with regards to story, but as an entry into the low-budget kick-start-a-career canon, I think it’s a terrific little piece that will elicit more than a few winces in pain and surprise.