I read a fellow blogger’s review on this film, and he proudly declared it to be “the Schindler’s List of American Slavery films”. A bold claim (especially considering the Holocaust’s continued thrall over popular culture and the horror with which it is rightly regarded) to make, and one I’m here to report is absolutely spot on the money. 12 Years A Slave should be mandatory viewing for everyone – like Shindler’s also should be, as I restrain from retelling the story of how my younger brother required an explanation as to what the Holocaust was only ten years ago! – for its gut-punch effect of humanizing the inhuman. Almost every time out, man’s inhumanity to his fellow man makes for the most appalling, heartbreaking stories, and 12 years is no different. Based on the autobiography of the real Solomon Northup, and published in 1853 (yes, that’s over 150 years ago), the film essays Northup’s journey into slavery, his drive to survive the most appalling conditions and lifestyle, before his (eventual) return to his family, over a decade later. Director Steve McQueen has crafted a film so bereft of hubris, so forthright in depicting the reality of life at the time, it’s a searing indictment on the way America was before Lincoln came along and started to change things. Is it easy viewing: no, not at all. Is it essential viewing: yes, it most certainly is. 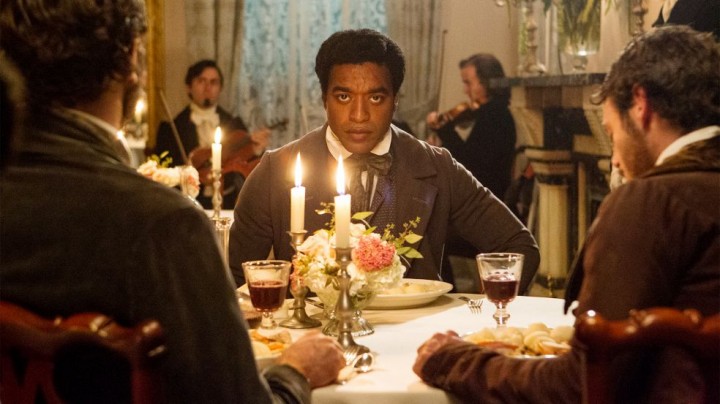 Two white men and a black man, what can go wrong?

Solomon Northup (Chiwetel Ejiofor) lives with his wife and two children in Saratoga, New York, in 1841. Northup is Negro, although a free man, and makes a living as a musician. After he is tricked into traveling to Washington under the pretense of joining a “circus” for two weeks, Northup is drugged and sold into slavery. Renamed “Platt” for his new white masters, Northup winds up being sold by slave trader Theophilus Freeman (an ironic twist) to plantation owner William Ford (Benedict Cumberbatch). Working for Ford, Northup finds himself being confronted by North’s belligerent carpenter, John Tibeats (Paul Dano). As tensions escalate, Northup is nearly killed by Tibeats, before Ford send him to work at another plantation, owned by the hard driving Edwin Epps (Michael Fassbender). Epps, who harbors a lust for local slave girl Patsey (Lupita Nyong’o), has a strained relationship with his wife (Sarah Paulson), and treats his slaves harshly for misdeeds and failing to work hard enough. Through the years, Northup tries to write a letter to his family, although he knows if he is caught he will be killed. A chance meeting with another carpenter, this time from Canada (Brad Pitt), gives Northup his only chance to escape slavery and return to his family in New York. 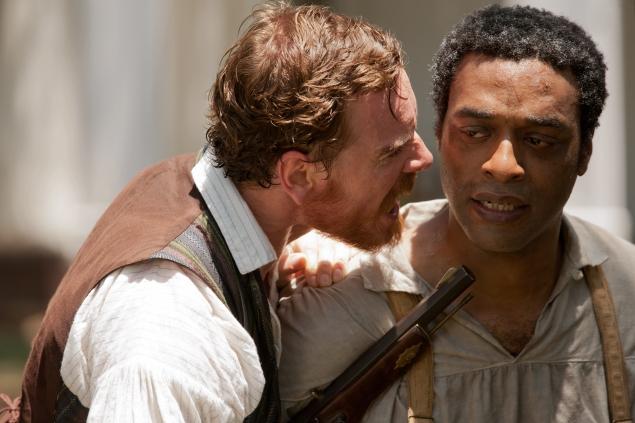 I swear to God, if you don’t tell me how you scored Keira Knightly in Love Actually I’ll shoot myself!

Lavishing praise on 12 Years A Slave is easy, simply because it’s a damn great film. Whether you find this kind of story “entertaining” is not the point, largely because the movie serves as a treatise on how slavery is pure human evil, and could never be considered entertaining in any way, shape or form. What the film does do is, in my opinion, educate. It enlightens. It asks us, some century and half on, if anything has really changed. Has slavery been abolished – no, there are people all over the world working in similar (or worse) conditions than Northup and his indentured brethren endure through this film. Late in the film, Brad Pitt’s White Knight character (no pun intended) makes the grand charge against slavery in all forms, up against Epps’ sabre-rattling denial that he should have to justify those he considers his “property”, and it’s a telling moment in the film. The fact that Northup is largely uninvolved in this moment is equally telling, in leaving two white men to argue the fact about black civil rights seems to smack of the Hollywood “edgy” feel, and I guess this scene undermined a lot of the emotional journey for Northup and the audience particularly; the script, by John Ridley, is peppered with terrific moments of horror and heartbreak, tinged with loneliness and sadness and utterly lacking in falsehood, and yet this crucial scene, laden with purpose and the moral compass of the entire film to that point, is stolen from Northup’s very grasp by two white guys arguing the point. 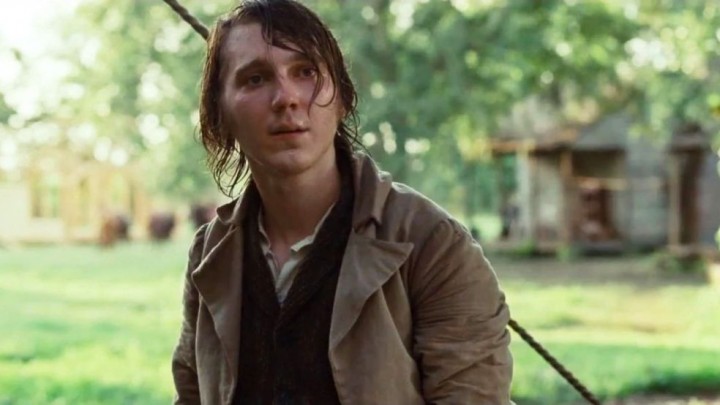 No matter what the film, I always look sweaty.

What the film does so very well is unwrap the very seedy underbelly of the great American Shame – the slave trade – and deliver it purposefully into our faces with a passionate meditation on the acts of barbarity and inhumanity inflicted on the negro during this time. It’s a searing, potent, powerful, explosive mix of racism, cruelty, insanity and deliverance, a masterwork of performance and direction that will leave only the most granite of heart untouched. The film is exquisitely filmed by McQueen, a stately and crisply eloquent style that allows the actions (and the actors) to do most of the work, relying on the sheer horror of what transpires within the frame to move us more than fancy angles and editorial trickery. Much like his previous film, Shame and Hunger (both of which also starred Michael Fassbender), 12 Years A Slave never once shies away, never once smothers the reality, never gives us respite from the violence, thuggery and desperation involved in this story; McQueen allows his camera to linger on a scene, refusing to cut away and give us a breather. The film is the more powerful for it. 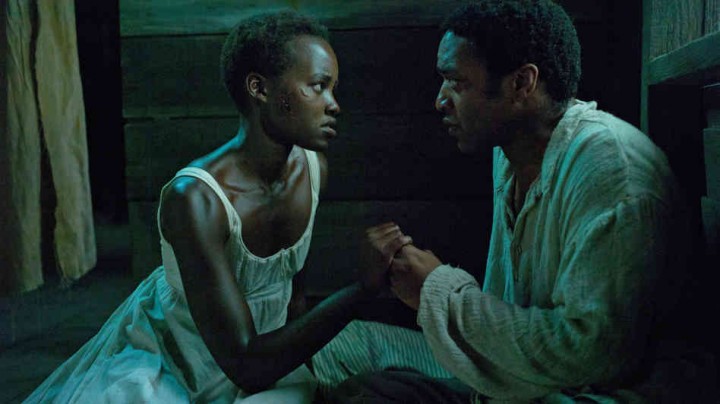 Just so you know, I’m not normally into weirdos.

While McQueen’s deft direction provides the story with a deliberate pace, it is also superbly acted by the entire cast. Led by Chiwetel Ejiofor, as Northup, in a career-defining performance, and more than ably assisted by a stunning Michael Fassbender, in a role that almost steals the limelight from Ejiofor in a lot of places, the entire cast deliver truly mesmerizing, captivating stuff. Sarah Paulson is truly odious as Epps’ horrible wife, Mary, Paul Dano is creepy and terrifying as Tibeats, while Lupita Nyong’o is a revelation as Patsey, in a role I suspect will never really leave her. Nyong’o is truly heartbreaking here, with Patsey’s tormented past, and utterly indescribably future at the hands of Epps, one of the most moving and heart-rending arcs in the entire film. Her beseeching of Northup to murder her, to allow her to escape the torture she undergoes almost daily from Epps lustful gaze, will break your heart. Benedict Cumberbatch’s performance as William Ford is magnetic, with the actor delivering a convincing American accent and eschewing his Sherlockian style for a more lordly countenance. Blink-and-miss-it roles to Paul Giamatti, as a slave trader, and Brad Pitt, as a Canadian carpenter, as well as Alfre Woodard as the black wife of a nearby white plantation owner, are limited in impact but add weight and substance to the film’s tone. Also, see if you can spot a slightly older Quvenzhane Wallis, the little girl from Beasts Of The Southern Wild, somewhere in the film. She’s all grown up now, you know. 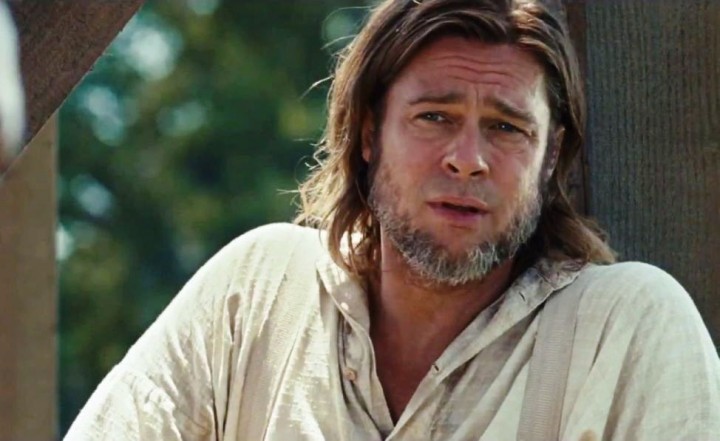 Filmed on a modest budget of $20 million, 12 Years A Slave doesn’t feel cheap. It doesn’t look or sound cheap either, with DP Sean Bobbit’s hypnotically beautiful cinematography and Hans Zimmer’s haunting (and restrained) score bringing the… dare I say majesty of Northup’s story to the fullest potential. Bobbit lenses the film with a full color palette; there are no desaturated or dull-grey tones here. McQueen’s refusal to cut away in key scenes, such as a particularly brutal moment of violence against Patsey late in the movie, is counterpointed by a melancholic, almost regretful editorial style from Joe Walker, who worked with McQueen on his previous films and who also chopped the Michael Caine thriller Harry Brown. Walker allows a scene to marinade – although I suspect there was some material cut from a moment between Northup and drunk slave white-dude Armsby (Garret Dillahunt), where the latter sits to chat to Northup for a single line before getting to his feet and leaving, which is quite an odd conversation to have, really. Even so, the editing, pacing, the very style of the film is stately, almost demanding you to admonish it for sticking so rigidly to its internal logic. 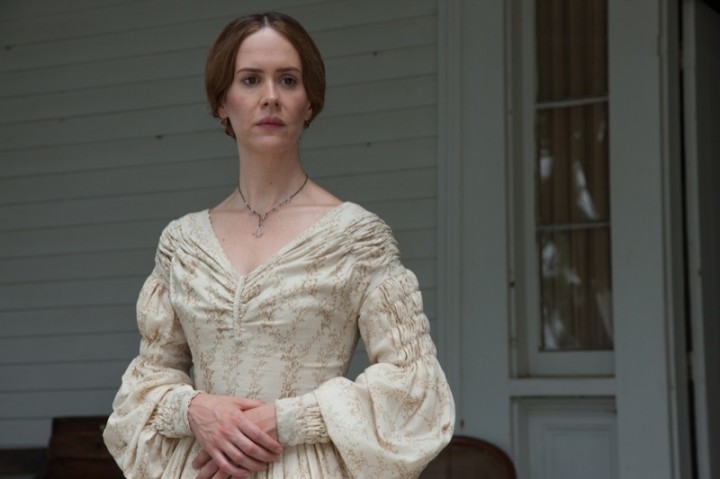 Nah, I’m paid to act like this. But secretly, I kinda enjoy it.

12 Years A Slave is a powerhouse of a film. It demands your attention, it asks you to watch it and remember its story, and I dare say for most it will stick with you well after the credits have finished rolling. There are moments in this film designed to horrify you, designed to shake you from your iPhone and watch the damn screen – McQueen reaffirms himself as one of the best storytellers the medium has ever produced (not something I say lightly, but if you look at his filmography to this point it’s hard to argue otherwise), and Fassbender once again delivers a performance that rips itself into your eyeballs and demands attention; he really is a class above most others, and one of the best actors working today for sheer intensity and commitment to a role. This is a film that will move you no matter your persuasion, it’s a story of unquestionable dignity, repression and the ugly side of human nature, and demands your time in the most powerful, commanding way possible. An absolute must-see.