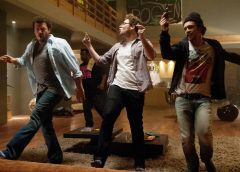 Director : Seth Rogen + Evan Goldberg
Year Of Release :   2013
Principal Cast :  Seth Rogen, Jay Baruchel, James Franco, Jonah Hill, Danny McBride, Craig Robinson, Michael Cera, Emma Watson, Rihanna, Jason Segel, David Krumholtz, Paul Rudd, Mindy Kaling, Christopher Mintz-Plasse, Aziz Ansari, Channing Tatum.
Approx Running Time :
Synopsis: 6 comedy stars partying at James Franco’s house find themselves in the middle of the Apocalypse. With limited food, water and intelligence, as well as a growing animosity towards each other, the six friends must find away to win themselves a journey into heaven to escape Hell on Earth.
What we think :  A hodge-podge of apocalyptic humor and stoner comedy makes This Is The End work more often than not. Some nice cameos and the idea of Jonah Hill being raped by a demon from Hell make this film utterly palatable in most respect, save for one: Danny McBride, possibly the unfunniest comedian working in Hollywood today. You’ll go a long way before you’ll find anyone able to convince me otherwise; even with his involvement, however, I still think this film is a gem, and worth a look or two. It won’t be everyone’s cup of tea, but it’s definitely one of the better stoner comedies of recent times.

This Is The End represents something of a changing-of-the-guard for modern comedy; the “all-star movie”, which rose to fame in the 70’s and 80’s with a cavalcade of famous Hollywood names appearing all in the same film, is given a new lease of life here, as Seth Rogen and his buddies star together in this haphazard, side-splitting End of The World flick that delivers some nice moments of comedy with some ordinary moments of pathos. Appearing as “themselves”, six of American comedy’s most famous up-and-comers produce a layabout, haphazard skit show and turn it into a movie of sorts – one in which Michael Cera produces his best ever performance, Emma Watson completely trashes her Harry Potter persona, and Channing Tatum provides one of the films’ funniest moments. This Is The End is not highbrow, intellectual comedy; the film is broad-spectrum, hit-or-miss pie-in-the-face comedy, the kind which throws everything at the screen and hopes some of it sticks. Is it funny? Yes, it most surely is. Is it in good taste? Well, that’s for you to find out, dear reader.

Landing in Los Angeles after moving from his native Canada, Jay Baruchel arrives at fellow canuck Seth Rogen’s bachelor pad for a weekend of movies, weed, alcohol and slothing about. So when Seth wants to go party at James Franco’s house, Jay is miffed, but acquiesces and the pair travel cross-town to what is effectively a fortified bunker passing off as a residential palais – Franco’s recently refurbished mansion is indeed ground zero for a massive party. At the party, Seth and Jay bump into Jonah Hill, who tries to really ingratiate himself with Jay, as well as Craig Robinson, a drug-addled Michael Cera, Rihanna, Jason Segel, Paul Rudd and Christopher Mintz-Plasse. When Jay decides to go out for a pack of cigarettes, Seth accompanies him, and while at the store the world is stopped for The Rapture, leaving Jay and Seth to scramble back to James Franco’s house in the ensuing carnage. The party is interrupted by the End of The World, leaving James Franco just a little pissed off, while major comedy stars like David Krumholdtz and Aziz Ansari are sucked down into Hell as a giant sinkhole appears right in Franco’s front yard. Jay, Seth, Franco, Jonah Hill and Craig Robinson remain inside Franco’s palatial pad, to await their fate as the Apocalypse erupts throughout Hollywood, leaving the Earth a scorched ember. The next morning, they discover fellow comedian Danny McBride has spent the night in the bathtub, and goes downstairs to cook up a massive spread as a way of thanking Franco for the party – McBride is unaware of the apocalypse outside, and the group are dismayed to learn they their few remaining food rations have been partially cooked by the garrulous McBride. What follows is a gradual Lord Of The Flies breakdown in the friends’ relationships as they are pushed to the limit to survive the End of Days.

It’s a given that if you pack a film with as many comedians and stars as possible, you’ll eventually get at least a few chuckles, if not some outright belly-stretching guffaws. Admittedly, modern comedy is a far less circumspect genre these days than it used to be, and the “comedy” of Hollywood today is largely based on the personality of the stars involved than anything actually funny, yet This Is The End goes a long way to rectifying this – at least in my eyes. The majority of the cast in this film are, in their own ways, quite funny – Baruchel was terrific in She’s Out Of My League, Rogen delivered a great performance in 50/50, Craig Robinson was hilarious in Hot Tub Time Machine, and Jonah Hill was nominated for an Oscar not all that long ago, so it’s not like they haven’t got any cred whatsoever. You’d think that sticking them in a Buddy Comedy like this would be a guaranteed laff riot, and to a certain extent you’d be pretty darn close to being right: if it wasn’t for the horrendous comedy style of Danny McBride – who single-handedly ruined Your Highness (which, I might add, also co-starred James Franco) – this film would be a real gem. It’s a silly little thing, really, but McBride nearly ruins this film completely.

The film’s premise is simple – five friends and Danny McBride are stuck in James Franco’s house during the Rapture and Apocalypse. You’d think comedy would be the furthest thing on anyone’s mind, but this scenario is ripe for a good old Hollywood shellacking – and the script by Seth Rogen and co-director Evan Goldberg skewers all the genre conventions and makes this a testosterone-driven Boys Own Adventure that skips through its dull spots with a transition from scathing insult humor to startling slapstick to outright spoof to actually thrilling horror. Throw Jonah Hill into Exorcist-style makeup and give him a spew sequence that rivals anything Monty Python might have put together, and you’ve got yourself some comedy gold. The film’s basic level of humor is each star ripping into each other about their variety of career choices – Jonah Hill’s Moneyball, Franco’s 127 Hours gets a run, while a pointed comment about Rogen’s famous laugh always brings a chuckle – it’s juvenile, non-sequitur comedy that never strives for greatness when it can wallow in mediocrity; yet, for all the scripts wonky failings, the film never feels too stretched or deliberate, as if they’re simply making it all up on the run and priding themselves on that fact. The film hangs on the chemistry between Rogen and Baruchel, both of whom are great to watch, and it’s them delivering the most slim chance of “character” that motivates a lot of the angst the premise involves.

Baruchel and Rogen are affable and approachable in this film, their easy-going stoner natures making what little narrative trajectory the film has just that little more palatable. Jonah Hill offers the occasional verbal riposte to his comrade’s jibes, but it’s when he has to turn into a demon monster that things go really off the chain. James Franco personifies his own laid-back nature with his “party hard at all costs” persona, while several “he might be gay” jibes make for a few small chuckles. Craig Robinson offers a memorably “shouty humor” performance, as the “token black guy” of the film who – and I don’t think this would be too spoilery – sacrifices himself first to save his friends, in one of the film’s more memorable closing moments. Even the bit-parts to Michael Cera (going against type, as a drug-taking, misogynistic asshole), Emma Watson (as a party attendee who may or may not be potentially raped by one of the six surviving guys, it just depends on who looks more “rapey”) and pop-star Rihanna (fresh off her success as a film star in Battleship) appeal to the masses, although many of the cameo appearances are small, too quick, or barely seen at all. Generally, however, this “we’re all a big happy family” style of comedy from everyone involved is just nice to watch.

Crucially, the film is almost ruined by one Danny McBride. McBride is the screeching, buffoonish, Homer Simpson of the group, stonewalling attempts to escape the Apocalypse and, with Franco, delivering one of the most awkwardly embarrassing screen moments of the last few years. A five minute sequence involving Franco and McBride screaming obscenities at each other – involving bodily ejaculate – is cringe-worthy and utterly removes any fun in the film. McBride’s loudmouth comedy is almost offensive in its ragged, brash obsequiousness, lacking subtlety (or an “off” switch!) and any kind of.. you know, humor. He’s a pain in the ass throughout this film, and it’s a blessing when you think he’s out of it for good. He’s like an out-of-control John Belushi, only without the restraint. This Is The End might have been a terrific comedy film had I not had to endure McBride’s ranting, offensive style of humor. If one can call a scene involving “jizz on the pages of my Playboy” as humor in this day and age. The majority of the film, however, rises above such labored stupidity.

This Is The End is a wildly uneven, generally fail-safe comedy movie: the primary protagonists are completely watchable here, with some witty barbs and larrakin behavior ensuring the cult “beer and pizza movie” status of this film is assured. Indeed, it’s the kind of film best viewed in a large, possibly drunken, group. Watching it alone, you’d probably think the whole things a silly, silly shenanigan hardly worth the time, but with a bunch of friends around to guffaw at the zingers and ribald humor on offer here, you’ll definitely have a great old time. The film doesn’t waste a lot of time getting going, and neatly dovetails some (erroneous) minor religious themes throughout the proceedings, and delivers a fairly amusing climax (and even more amusing coda), leaving you thinking a lot better of the film than you probably expected. Don’t expect too much, and you’ll find some nice laughs here. Expect a lot, and you’ll be disappointed. I thought This Is The End was quite a good watch, all in all.

8 thoughts on “Movie Review – This Is The End”