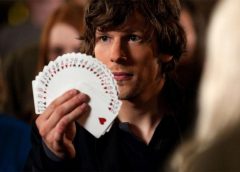 Director :   Louis Leterrier
Year Of Release :   2013
Principal Cast :  Mark Ruffalo, Jesse Eisenberg, Woody Harrelson, Isla Fisher, Dave Franco, Morgan Freeman, Michael Caine, Melanie Laurent, Michael J Kelly, Common, David Warshofsky.
Approx Running Time :  131 Minutes
Synopsis:   Four street magicians come together to perform amazing feats of magic – robbing from the rich, and giving to the poor. An FBI Agent and a French INTERPOL agent must work to stop them.
What we think :   Slick, well produced caper film does its best to trick and confuse – and succeeds in the latter, more than the former. There was a growing sense of unease as this film approached its climax – it could never hope to deliver the promised twist with any kind of alacrity or awesomeness; rather than develop a story with a twist in it, it appears they wrote a twist and then tried to shoehorn a story around it.

Magic is the enjoyment of illusion.

I feel gypped. Swindled, even. Yeah, I said that in a Pink Panther voice. Now You See Me had everything going for it: classy actors, stylish production design and a can’t-guess-it plot. The problem is, it undoes everything it works for in a final-act swerve that will make any sensible film viewer question the need for M Night Shyamalan’s sleight-of-hand bar-setting and what it’s done for “twist” endings since. Now You See Me spends a great deal of time in magical double-talk and swindlelogue, mincing mystical sayings and abracadabra-lite charm notions for actual plot, and while ostensibly flashy and slick, comes undone at the last, desperate, gasping hurdle of breathlessness. The film is entertaining, and for the most part I did enjoy it, and I imagine a lot of folks will overlook the criminal use of the plot “twist” here as simply a grumpy old cynic like myself just trying to make myself feel better about not enjoying it, but for all its glitzy lights, all the snappy dialogue and “one step ahead of the cops” routine threaded throughout, Now You See Me feels as empty as the hat a magician shows you before he pulls a rabbit from it.

Four different magicians – J Daniel Atlas (Jessie Eisenberg), Merritt McKinney (Woody Harrelson), Henley Reeves (Isla Fisher) and Jack Wilder (Dave Franco) – are given an opportunity to join the mysterious magical fraternity known as The Eye – they each receive a card with a time, date and address on it, and upon following this instruction, arrive at the same New York apartment. A year later, they team up to perform as The Four Horseman, stealing millions of Euro from a bank in France whilst performing at a Las Vegas auditorium, sponsored by insurance magnate Arthur Tressler (Michael Caine). When their crime is committed in front of such a large audience, the case is given to FBI Agent Dylan Rhodes (Mark Ruffalo), who is encumbered with INTERPOL Agent Alma Dray (Melanie Laurent) to stop them – The Four Horsemen have promised further shows in which they will steal millions. Meanwhile, the Horsemen are followed by famous former magician – now magical secret revealer – Thaddeus Bradley (Morgan Freeman), who provides intelligence on how much of the Horsemen’s illusions are performed. As the Horsemen build up to their last great trick, Rhodes and the FBI are tricked at every turn by the magical quartet, with even their own detective work being used against them.

You remember that great moment in Christopher Nolan’s The Prestige, when it was revealed the truth about Christian Bale’s character, Fallon? Suddenly, the film turned on its head, and you felt that you’d been duped in the most magnificent, most delicious way possible? Now You See Me is exactly the opposite of that. It attempts to do something similar, in revealing the truth about a character you’d thought you had a handle on – I won’t say who, I’ll leave you to be as disappointed by that as I was – but director Louis Leterrier’s film isn’t a patch on Nolan’s The Prestige. Instead, all the flashy visuals and empty card-tricks this film uses as “development” come unglued by one of the most ridiculously contrived “twists” in the history of modern cinema. It’s a twist so far out of left field, it’s utterly implausible. At least in films like The Sixth Sense or The Prestige, you don’t know there’s a “twist” coming (at least, I didn’t!) but  when it does it makes sense; Now You See Me almost felt obligated to have a twist in it – a narrative sleight-of-hand to match the visual ones throughout the film – and the end result feels like somebody was throwing darts a pictures of the characters on a wall and said “Yeah, that’ll do.” Great twists in film are worked into and through the narrative, and sucker-punch the audience with an “I didn’t expect that” revelation; this film opts to ensure you expect a twist, but can’t deliver on the cleverness expected by an audience attuned to the flashy, crash-and-bang theatrics of what Leterrier provides. Like a magician promising to pull out a rabbit, before revealing at the end that there never was any rabbit and how clever he is for pulling the wool over us.

The third act reveal of the puppet-master of all that occurs between opening and closing credits is so galling to me, so utterly full of contempt for the audience’s intelligence, it just kneecapped the film completely. I couldn’t take it in, I was so boggled by what was supposed to be a cool turn of events, that it made no sense whatsoever considering what had happened for the rest of the film. Unless I’m wrong, and it was the height of intelligent film-making. But I doubt it.

Until this third act reveal, Now You See Me is a clever combination of modern film trickery, narrative maneuvering and character-driven plotting, designed to keep us guessing as to everyone’s true motives for what happens on the screen. Cross-continental bank heists and in-crowd bank balance adjustment are some of the fun times the Horseman have as they run rampant through legal loopholes, and dodge the FBI’s long reach. They always manage to stay one step ahead of the curve, do the Horsemen, but inevitably (perhaps even unfortunately) through more conventional means. Their exposure of Michael Caine’s shonky insurance mogul, Arthur Tressler, is but a sidebar to the main plot – what is the purpose for the Horsemen in doing what they do? The script tries to be to clever, constantly telling us that we shouldn’t be watching what the obvious hand is doing, rather we should be looking to the background for the real magic. It’s good to offer this to audiences, but the payoff is that no matter how intelligent you are, no matter how slow you freeze-frame this film, you’ll never guess the outcome as anything other than pure fluke. It’s un-guessable, this film. One imagines this is purposefully so, so as to make the audience go back and rewatch the thing to make sure they were seeing what they thought they did (you did, don’t worry) – and it’s at that point where you’ll figure out just how convoluted it all is.

Leterrier is a director of some style and skill – his take on the Hulk in the early Marvel Universe flick, Incredible Hulk, was actually pretty decent – and the early going in this film is filled with zesty energy and the slightest hint of subterfuge. The staging of the magic shows is excellent, with broad-scope audience inclusion and the sheen of lens-flare and glitter manufacturing an entertainment that really draws you in. At times, the film’s off-balance dramatic moments come without a killer punch – Tressler’s undoing, in particular, feels forced and unnatural, becuase the film hasn’t earned the moment prior – but the moments with Ruffalo’s Rhodes and Laurent’s Alma Dray are interesting, if entirely superfluous to the overall plot. Come to think of it, in the end Alma Dray brings almost nothing to the story other than a female presence aside from Isla Fisher, and although the resolution to her character’s relationship with Rhodes was good enough, in the end it felt half-developed. The script’s inability to really sell these characters as anything other than a 2-dimensional scrabble of caper films is this film’s other main problem. You never feel that any of these characters are real; although Ruffalo makes Rhodes feel the most developed of the lot, it must be said.

The key four Horsemen, led by Eisenberg’s arrogant and selfishly snappy Atlas, are a mixture of ego and, well, more ego. Eisenberg spends the entire film with that self-satisfied, overly smug look on his face that makes you want to punch the guy out just for being a prat. This kind of role is suited to his needy patter, the desire for “getting the last word” overriding self-reservation or even common sense. Woody Harrelson steals the show from his castmates as McKinney, the mentalist who can hypnotize people into doing all manner of things, and although he’s several times older than his four accomplices, it never feels like he’s not part of the gang. Dave Franco is vastly underwritten as Jack Wilder (a cool magician name if there ever was one), given little to do other than stand in the background and bulk out the group. Isla Fisher is confusingly aloof and desirable as Henley, although the script gives her very little comedy to do (Fisher’s a natural at comedy) instead offering her more direct, dramatic moments that underpin her performance weaknesses. She’s good enough, but not awesome. Morgan Freeman’s anti-magician, Thaddeus Bradley, feels like somebody was really reaching for a character who could explain a lot about what’s going on to the cops (and to us!) but Freeman’s a competent enough actor to make even the smallest, silliest role work. Both he and Michael Caine provide some desperately needed gravitas for this highly strung, flashy film.

With its gaudy, neon-infused pseudo magic and tricksy, incomprehensible final act twist that blows out the kneecaps of everything you’re just witnessed, Now You See Me is a diverting, attention-seeking flick that will entertain most, annoy some, and infuriate others. Lacking subtlety and the ability to create a truly memorable set of characters, Now You See Me’s carnival ride of magical excess and convoluted deception feels desperate rather than decisive, and this largely kinetic movie unravels before your very eyes. My thinking is that by asking us to watch so closely, they hope we don’t see the cracks around the edges.

2 thoughts on “Movie Review – Now You See Me (Extended Version)”