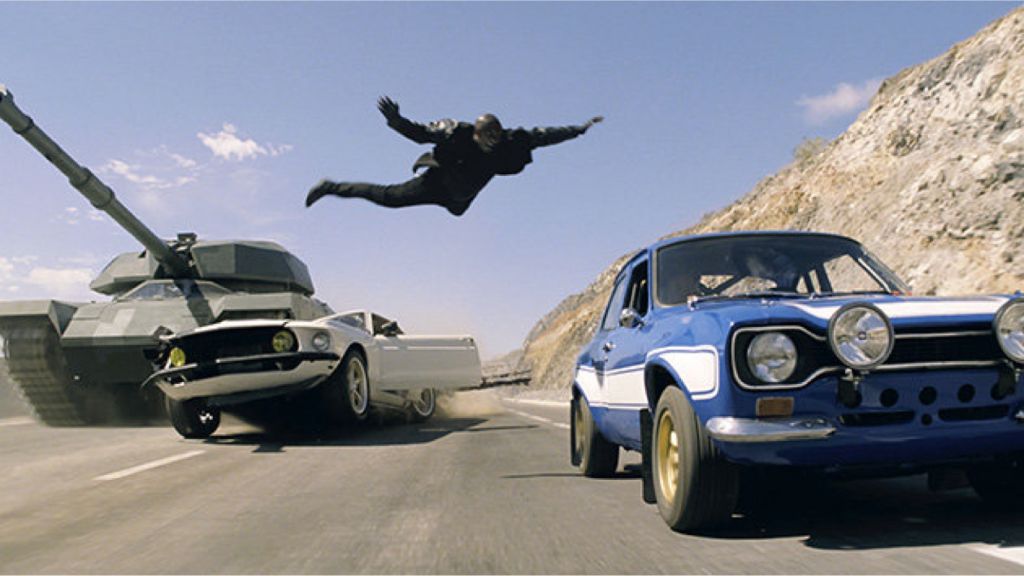 This review was written before the untimely passing of Paul Walker on November 30th, 2013. Rather than rewrite the review completely, we have opted to leave it as originally written.

They finally found somebody bigger than The Rock.

Bless you, Justin Lin, for saving the Furious franchise from an early death. Way back in the day, post-Fast & Furious 3: Tokyo Drift (a horribly mediocre film) came and went, and left the initially promising concept films of street racing hoons and their underworld lives languishing in the middle-world of being commercially successful, critically lambasted, and running out of steam. The lack of kudos for Tokyo Drift had the franchise stalled; street racing wasn’t “cool” any more, so the series needed to rethink itself if it was to continue. Given another chance, Lin returned to helm Furious 4, which reset the franchise by bringing back the majority of the original cast for a film less about street racing than about criminal activity involving drug running and heists. While Furious 4 proved that the franchise still had potential (and slack-jawed many by offing one of its major characters in Michelle Rodriguez’ Letty), the incoherent visual effects and muddled narrative made for an involving, if somewhat weak film that reset the saga in a new direction entirely. Fast 5, again helmed by Lin, was (and still is) considered by many to be the high point of the franchise thus far – it brought in Dwayne “The Rock” Johnson and a few new faces, hinted at the resurrection (as unlikely as it was) of Letty after her death in the previous film – and established itself with one of the most breathtakingly thrilling chasey races through downtown Rio de Janiro. Key to the success of Furious 4 and 5 were the plot threads interwoven through each film tying them together; the Letty’s Dead arc, the Brian/Mia parenthood arc, the Rock’s backstory and his post-credit link to 2 Fast 2 Furious character Customs Agent Fuentes (played by Eva Mendes), mixed with the brazen action set-pieces and paved the way for a new, exciting direction in which the characters would have to evolve. So we come to Furious 6, promoted with the tagline “All roads lead to this” which might indicate some sense of finality to the franchise. Is this truly the end of Dom Toretto’s journey as a master driver, alongside erstwhile buddy Brian and the requisite gang of malcontents?

After their successful heist of billions of dollars in Rio, Dominic Toretto (Vin Diesel) and his gang have gone their separate way, living the high life all across the globe. However, DSS Agent Hobbs (Dwayne Johnson) requests the use of Dom’s team to hunt down and thwart the plan of highly organised car-heist gang run by Owen Shaw (Luke Evans), who seems to be hunting some kind of top secret military device for his own nefarious ends. Dom’s gang are all comfortable and settled; Brian (Paul Walker) and Mia (Jordanna Brewster) are living in the Canary Islands, Tej (Ludacris) is in Spain, Roman (Tyrese Gibson) flies his private jet around the world with a bevvy of beauties, while Gisele (Gan Gadot) and Han (Sung Kang) are in Hong Kong. Hobbs informs Dom that Letty (Michelle Rodriguez) has turned up alive, which provides the incentive for Dom to get the team back together – in performing this job, Dom and Brian stipulate that success will equate to a full pardon for the team, allowing them to return home to the USA.

Well, it’s not the end – a cool mid-end-credits sequence ensures Furious 7 will involve more British Invasion nastiness – but it is a nice break point for the story arcs which began in Fast 4. The arc involving Letty’s death and resurrection is concluded, Brian and Mia continue their life of bliss with a small sprog now in the picture (and the banter about whether he’s going to be an Import or US fan is typically masculine), and Tyrese Gibson’s self-deprecating inability to become the next Will Smith continues unabated. While it’s hard to see how the series will continue past Fast 6 with the same attention to subplotting, if the franchise was to bow out now it wouldn’t leave many threads hanging. Fast 6 delivers yet more of the stuff we expect to see: fast cars, hot women and an overenthusiastic fetish for high-falutin’ stunts and carnage. As Chris “Ludacris” Bridges’ puts it midway through this film; “Vehicular warfare”.

And what glorious warfare it is: the car-on-car battles are indeed something to behold, given they’re the centerpiece for the franchise at large, and Lin has this stuff down pat now. Racing through the streets of London, across bridges with a tank (in one of the more grisly sequences) and along what must surely rank as the worlds longest airport runway, Furious 6 has its fair share of vehicle mayhem to unspool, and Lin does it in ways that are not only easy to watch, but actually propel the story rather than exist to serve as trailer bait. The story points are largely inconsequential to proceedings (as it invariably is with the Furious films) and the character beats generally lack punch and pizazz; but as far as visual spectacle goes, Furious 6 delivers what you expect. I still think the final city chase through Rio in Furious 5 is the best executed action sequence the franchise has to offer, but Furious 6 outdoes it for sheer bragging-rights enormity and extensiveness. The final cargo plane takedown, which last a good thirty minutes or so (at least, it seemed that long) is as slick and as explosively jaw-dropping as any Transformers movie, although exactly why Lin chose to film it at night remains a mystery – a lot of what happens gets lost in the shadows and darkness, obscuring some of the cool stuff for the sake of a certain look that makes little logical sense.

The script (if one can call a bunch of exposition and vague “family matters” epithets a real script) is a doddle: it sets up the premise with a lot of gobbledy-gook and hand-candy in the form of “getting the gang back together”, and when you throw in Dom’s inexplicable (yet noble) decision to throw potential freedom away because somebody shows him a picture of his I-thought-she-was-dead lover, it becomes obvious that the leaps in logic and plausibility are the furthest thing from Lin’s mind, as he settles for making the film as frenetic as possible as often as possible. Dom’s arc in this film is finding a way to prove himself to the amnesiac Letty, and to be honest this story point is handled poorly – making it seem as if plank-o-wood Diesel actually gives a shit about Letty is a steep hill to climb for Lin, and the audience for that matter, and it doesn’t help that Diesel can’t act to save himself. Diesel’s brand of acting involves having a permanent scowl over his furrowed face, and as much as he’s considered one of the better “action heroes” of the modern era, he’s easily out-acted by franchise newcomer Dwayne Johnson.

Johnson can pride himself on bringing the Furious films to a new level; as an actor, he’s among the better ones in the series, and seems to understand the futitility of trying to take it all seriously. That and the fact that standing next to Diesel they look like two tree trunks bereft of foliage, and this film’s weaknesses become readily apparent: Diesel looks good while in action, but can’t act, while the Rock can both act and look awesome when throwing down the shit. New additions in Gina Carano (who can’t act either, as evidenced in Haywire and backed up here) as the Rock’s assistant, and Luke Evans as the eponymous Bad Guy (complete with Cool British Accent), provide fodder for more verbal banter across the screen, while the troupe of returning cast members fit into their roles with relaxed ease. Watching Ludacris and Tyrese Gibson barb each other is funny  in fits and spurts, and provides the films only real humor, and getting to see Rodriguez and Carano go mano-e-mano (is that the right term for female fighting?) through a London subway (and then again in the back of the cargo plane at the end) is a particular highlight, yet the weirdly written emotional moments lack truth and energy. Hell, even Brian and Mia’s kid looks like he’s in the wrong film, and, if anything, this element to the story isn’t even developed beyond a cursory few minutes at the opening. It doesn’t help that Paul Walker and Jordanna Brewster have zero chemistry together (Walker has the presence of a turnip throughout almost the entire film) and it’s awkward watching them interact as a couple.

Rounding out the cast of characters worth noting is the hulking Kim Kold, a giant brute of a man (who looks vaguely like Jesse Ventura did before he got all old and shit), plays one of Shaw’s henchmen, and whom appears to be the only guy on Earth larger in frame than The Rock. Watching the Rock and Kold go at it felt a little like those mountainous boulder giants in The Hobbit; every punch and hit, every clobber and rattletack felt like it could shift a continent. Actually, it was good seeing the Rock being tested against an opponent who looked like he could kick his ass, and while Kold’s eventual demise was a bit perfunctory, the fight was good while it lasted. Kold, I look forward to seeing you in your career as a Boss Level villain in future.

What I really enjoyed about Furious 6 (and, in all honestly, in 4 and 5 as well) is that the writers aren’t afraid to kill off a major character. Letty’s death in Furious 4 was a bit of a “what the?” moment that worked well, and paved the way for her return from the dead post Furious 5, and once again, Furious 6 has no compunctions in smearing several of its leading cast all over the ground as a way of shocking complacent audience members out of their dream state (although it must be said that if you’re asleep during these films, you don’t have it up loud enough). A genre franchise that isn’t afraid to kill off its core characters is something unique in steady-as-she-goes Hollywood, and to me this is the most interesting aspect of the saga. It’s like Game Of Thrones for the adrenaline set. Due to the more discombobulating action elements of the film, sometimes these “moments” work well, and sometimes they do not (the aforementioned mid-credits sequence is effectively jarring in effect, while a late-film death seems half-assed and lackluster, so horses-for-courses, I guess) but it’s not for lack of trying. I guess the major issue for these moments working or not is the effectiveness of the development of the characters involved; which means it’s a downward spiral for those seeking quality out of a Furious film.

Furious 6 doesn’t change the game (like Furious 4) or go anywhere we haven’t been before, and the humor sometimes doesn’t work like it should, but the rat-a-tat action sequences and meaningless Macguffin involved ensure the stakes are always high, the story punctuated by extended action sequences that delight, thrill and sock-it-to-ya, and the effortless rapport with the characters built up over several films make it all click like a well oiled machine. Sure, the action is incredibly insane, doesn’t make a lot of sense (mainly for the laws of physics) and at times seems to go on forever (the final cargo plane sequence lasts for an eternity, which is cool and all, but the speed at which that plane travels means it should hit the end of the runway and into a gutter about five minutes in, ending the film well early!) but it’s all for the entertainment than enlightenment. You know exactly what you’re getting with a Furious film, and if that’s an entirely bad thing, then this isn’t a film for you. 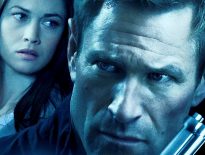