Director : Marcus Nispel
Year Of Release :  2003
Principal Cast :   Jessica Biel, R Lee Ermey, Eric Balfour, Jonathan Tucker, Erica Leehrsen, Mike Vogel, David Dorfman, Lauren German, Marietta Marich, Andrew Bryniarski.
Approx Running Time :   98 Minutes
Synopsis:  Five friends passing through Texas from a trip down to Mexico get more than they bargained for when they become entangled with the cruel machinations of a chainsaw-wielding freak intent on killing them all.
What we think :  Relatively creepy Chainsaw entry seeks to reboot the franchise, with a result that isn’t too far from being successful. While the central antagonist – Leatherface – lacks potency, it’s the supporting cast who elevate this film above its schlock roots. As a horror film, it’s certainly stylish in an icky-grimy-don’t-touch-the-walls kinda way, and if that’s the kind of thing that floats your boat, you’ll get a kick out of this one.

When Michael Bay’s Platinum Dune’s production studio obtained the rights to the Texas Chainsaw franchise, with the intent to remake the film for “modern” audiences, little did they know it would set off an entire sub-genre of Hollywood cluster-f@ckery whereby people began to mine into classic horror films to make a quick buck. Made on a relatively low budget, the 2003 edition of The Texas Chainsaw Massacre was critically eviscerated (as you might expect) but did surprisingly well at the box office, which left studio honcho’s looking for the next horror franchise to reboot for the new millennium. Whether this has resulted in a heightened appreciation of quality horror is a matter for historians to decide (I’d say no) but the initial impact of the millennial Chainsaw was profound on the Hollywood psyche. While most critics derided the film as a vile, vulgar piece of trash, audiences obviously lapped it up – and while it will never be said that audiences have any taste at all (hell, some of the worst films ever made become hugely successful thanks to audience apathy) there’s something to be said about the film which kicked off a new industry in Tinseltown: horror remakes. The question should at least be asked: is this reboot of Texas Chainsaw a step up, back, or sideways for the franchise, and is it better, worse or ambivalent to the legendary original? 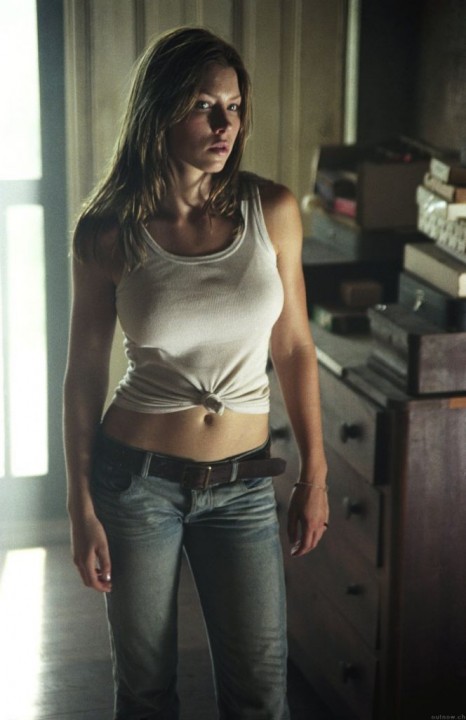 August 18, 1973 – traveling back through Texas from a trip to Mexico, on their way to a Lynyrd Skynyrd concert, four friends and a hitchhiker encounter a woman wandering along the road, mumbling and seemingly out of her mind. Erin (Jessica Biel), her boyfriend Kemper (Eric Balfour), their friends Andy (Mike Vogel) and Morgan (Jonathan Tucker), as well as hitchhiker Pepper (Erica Leehrsen) watch on in horror as the strange woman pulls out a gun and shoots herself through the head. In shock, the recently drugged up five-some decide to go to the police; they stop at a gas-station to make a call, with the woman behind the counter instructing them to take the body to an old mill out off the main road. Somewhat bewildered, the friends decide to trek to a nearby farmhouse to try calling the police again, in order to confirm the sheriff’s (R Lee Ermey) location, only for two of them to encounter a chainsaw-wielding maniac named Leatherface (Andrew Bryniarski), who proceeds to begin to butcher them all. One by one, as they try to escape the maniac, as well as the in-on-the-game Sheriff, it’s up to Erin to try and make a break for the relative safety of the open road to survive. 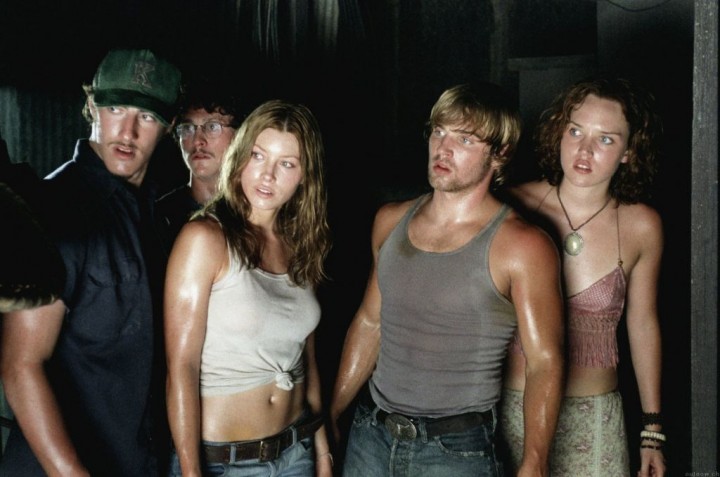 Damn, we’re all sweaty and stuff.

Okay, so Texas Chainsaw Massacre Reboot is good for a couple of things. First: Jessica Biel. Whoever it was who decided to have her run around the entire film in a tight white singlet, I thank you from the bottom of my heart. Wet, dry, dirty or not, Biel’s bouncy assets salvage a lot of this film from being sexless, disastrous tripe. And I mean that in the nicest possible non-misogynistic way possible. It’s easy to be scared of chainsaws and knives and creepy amputees in reed wheelchairs, but the innocence of Biel’s outfit, and the subtle subtext of sexualized violence it exhibits, ensures a more primitively cathartic journey of fear. Biel, as Erin, has no protection against the onslaught of Leatherface and his bizarre, weed-whacker family; the lack of clothing on her indicates an unsullied soul for whom torture is just around the corner – and it’s this primal terror that drives the film. Second, R Lee Ermey steals this thing outright as the creepy, not-right-in-the-head sheriff who terrorizes the group of friends probably ever moreso than Leatherface himself. For these two things, Texas Chainsaw Massacre comes recommended with caveats. 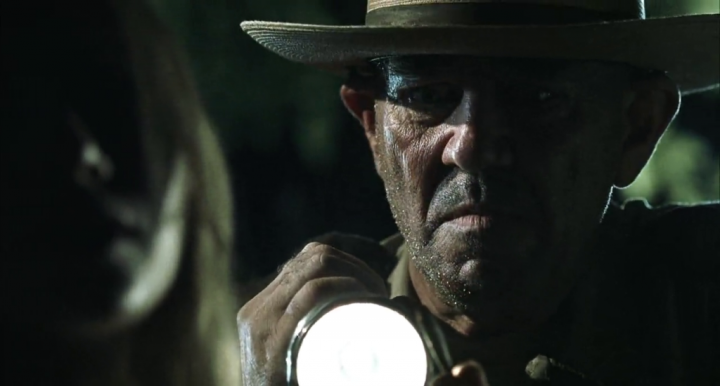 I say, you’re a little bit freaky, ya know?

Marcus Nispel helms this film with the slick, assured confidence of a seasoned horror professional. Channeling a David-Fincher-Se7en visual style, coupled with a morbid fascination with decay and grime, Nispel transplants us into the American heartland in the summer of ’73, a cross country trip going horribly wrong fueled by blood, gore and a lack of relief. Indeed, a lot of modern horror seems to be based on what Nispel achieved here – that oppressive, can’t-breathe style that suffocates viewers in a blanket of dread and despair; a nightmarish cacophony of screams, gurgling blood and true evil hidden behind the facade of weird. The film has a tinge of brown – nearly sepia – layered across it, boosting skin tones and dropping the red from the color of blood as it sprays across the screen. It’s a visual palette that’s effective for its ability to create a sense of unease in the viewer; the film feels dirty, almost grungy, like they’ve taken the toilet scene from Trainspotting and turned it into a sweat-box of a film. As a visual effort, it’s hard to fault the impact. 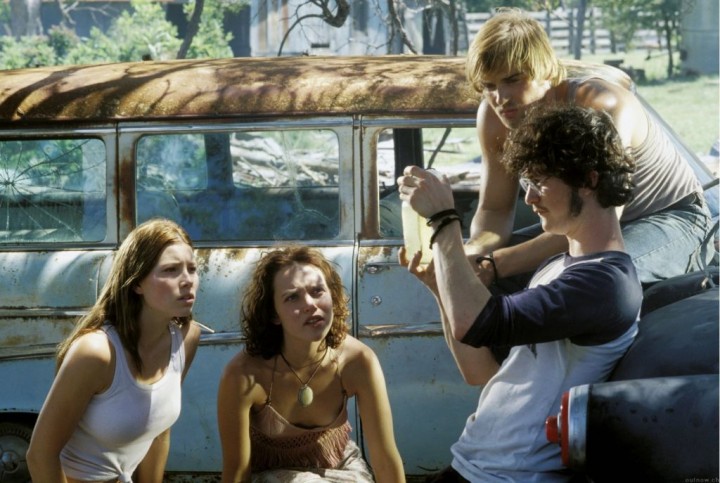 Just another excuse for Biel to bend over.

The cast do their best with the little development they have as characters. As a slasher film, the audience only want their characters in broad strokes, effectively creating a paradox whereby the characters become cliches, the film is weakened because of it, and the end result is – once again – a bunch of attractive busty teens running about getting hacked to pieces. The script spends the first five or so minutes setting up the basic characters – Erin seems like a goody-two-shoes, helped visually by the virginous white singlet representing purity, while her boyfriend, Kemper, is the former-cowboy of the group trying hard to maintain Erin’s respect. Nerdy Andy represents the audience: he makes us decide what we’d do in similar circumstances, and sometimes that’s uncomfortable for us to think about. Pepper and Morgan are the least interesting of the group, to be honest, and are given short thrift as far as development goes (at least, shorter thrift than anyone else, which isn’t saying a lot). R Lee Ermey’s unhinged local sheriff, Hoyt, rips into the film with the rough-edged dagger of officialdom gone mad, and it’s soon quite apparent on his arrival into the movie that he’s not quite the good guy everyone expects. Ermey’s the best thing about the film, if I was truthful to myself, and while his character is reprehensible, as an actor I don’t think I’ve seen him as creepy as this. 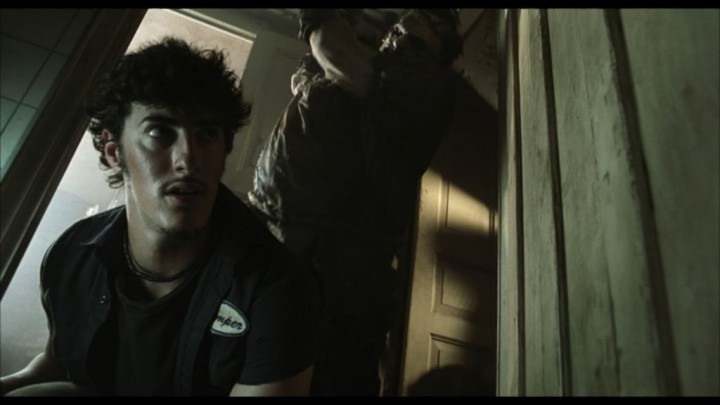 Something about this ain’t right…..

The rest of the film is filled with a smattering of Crazy Hillbilly Cliches. Leatherface’s family and associates are all kook-eyed, overall-wearing, animal-lovin’ weirdos, and Nispel’s camera dwells on them considerably to heighten the nightmarish quality of the film. They’re the kind of characters that invariably appear in every slasher film set outside the city, designed to set the viewer off balance, putting them ill-at-ease. It certainly works – this isn’t an area of the world I’d want to spend much time in, frankly.

Lastly, and by no means least, we come to Leatherface himself. Portrayed here by Andrew Bryniarski, Leatherface’s hulking brutality is barely accentuated by Nispel’s frantic direction whenever the character appears on-screen. There’s a strange lack of presence whenever Leatherface arrives, leaving the final act of the film almost bereft of true tension. Sure, the chainsaw adds a degree of fear, but Leatherface himself seems less defined this time out, as if he’s an afterthought in his own picture. Where he should be the primal force of the film, the motivating factor for survival, he’s reduced to a grunting, moaning minotaur stumbling about in the darkness. Nispel seems unsure of how to shoot him either, trying for brute force and sledgehammer ferocity and instead eking out a begrudging, humorless psychotic. Also problematic is the reduction of Leatherface’s inherent pathos – he should be a sympathetic character of sorts, berated into this brutal behavior by his evil family, but it’s never explained in the film. He just…. exists to kill, as if that was reason enough. The removal of his backstory from the film itself – if you’re a Chainsaw virgin you’ll have no idea what’s going on – leaves his motivations unclear, and the audience unable to connect with him as a character. This was the sole reason the original film worked so well (and a large part as to why the franchise has endured) but Nispel drops the ball in this regard. 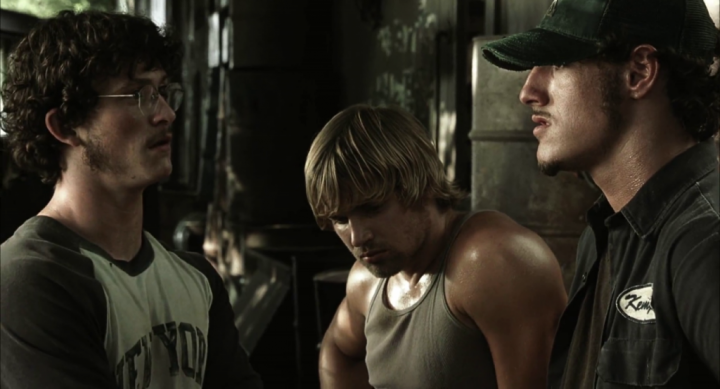 We could take it in turns, you know.

Indeed, the film’s use of Leatherface seems almost “well, if we have to”, instead of being the central idea. Ermey’s sheriff is vastly more interesting and vile as a character, and I was more drawn to his plight and those of his victims, than I was with Leatherface’s pursuit of the bouncy-boobed Biel. The final chase sequence, where Biel must outrun and outfox a severely wounded and unstoppable Leatherface, lacks tension and buildup – there is none – leaving the finale of the film something of an anticlimax. Nispel doesn’t even deliver a shocking twist, or a gruesome finale (save one character being run over by a car several times) to make the audience feel satisfied with the outcome. Instead, the film just ends, leaving the obviousness of the sequel-bait standing proudly out in the darkness. After all that great build-up of the beginning, the gradual descent into madness of the mid-section, the final act comes as something of a whimper. 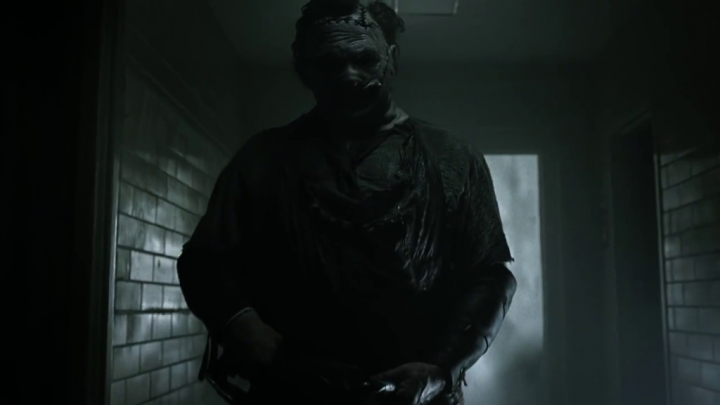 The Texas Chainsaw Massacre reboot is an entertaining ride into madness, if you so desire. Jessica Biel’s performance should have won her an Oscar for Best Screaming, while Nispel’s crisp, vile visual style depicts an Americana that should purposely be eradicated. It’s atmospheric, largely effective, and builds up to something great once Leatherface and Hoyt’s plans start to come together. The trouble is, the ending never quite gets to the point, and the failure of Nispel to adequately deliver a truly scary Leatherface means the end result is a bit of a let-down. Still, for kicking off the remake craze, you have to give this film some credit. What it does, it does well, and whether you like this kind of blood-thirsty film or not, there’s no denying it does exactly what it says on the box. Chainsaws, and massacres. Just watch out for Biel’s boobs.