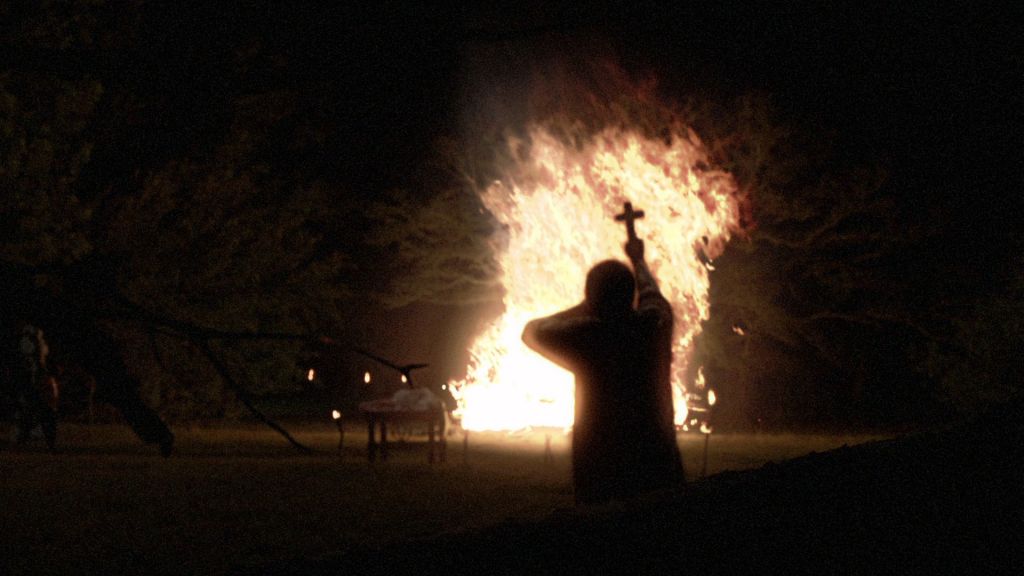 Director :   Daniel Stamm
Year Of Release :   2010
Principal Cast :   Patrick Fabian, Ashley Bell, Iris Bahr, Louis Hertham, Caleb Landry Jones, Tony Bentley, Adam Grimes, Logan Craig Reid.
Approx Running Time :   89 Minutes
Synopsis: In America’s deep south, a young girl is possessed by a demon – a preacher who lacks faith is called in to exorcise her.
What we think :   At-times scary, more often stupid beyond all reason, The Last Exorcism goes the found-footage route and fails. Hard. Stealing from Paranormal Activity, Blair Witch and – unfortunately – The Exorcist, The Last Exorcism is an exercise in dull, repetitive film-making. Modern thrill-seeking cinema is an iffy proposition these days for the most part, and Exorcism cannot stand on its own as a success in this area. The found footage tedium has well and truly set in, and The Last Exorcism should, frankly, be exorcised for the damage it does to the genre.

Screaming, shadows and funky religious demonism are all that matter to The Last Exorcism, an exercise in shouty overacting cinema that somehow manages to skirt effectiveness as a movie; unless being effective in causing a migraine is what this film was attempting, The Last Exorcism is a failure in every conceivable manner. While it’s competently shot, and generally well directed for a found footage film, the story, characters and contrived plot twists cause more eye-rolls than skin-crawls, and for a film of this kind, that’s a death sentence. And hard as it is for me to admit, I was kinda hoping this film would actually be pretty good.

Disillusioned preacher Cotton Marcus (Patrick Fabian) spends a lot of his time performing exorcism rituals for people seeking assistance from demons possessing their loved ones – he’s lost his faith in God, but persists with the charade of being a reverend to provide for his family. A film crew come to make a documentary about the preachers life, and accompany him on one “job” to perform an exorcism. Young girl Nell Sweetzer (Ashley bell) lives with her father Louis (Louis Hertham) and brother Caleb (Caleb Landry Jones) deep in the Louisiana farmbelt; Louis believes Nell to be possessed by a demon, and requests Marcus perform an exorcism on her. Marcus “performs” an exorcism, placating Louis and scoring himself a payday – but when Nell shows up at the film crew’s motel room unannounced, things begin to take a turn for the worse. Nell starts to exhibit weird behavior, manifesting in bodily distension and guttural vocalizations, leading Cotton to believe that perhaps the girl is indeed possessed by a demon. As the evidence mounts, and with Cotton trying to explain everything away as Earthly reasoning, Nell’s fate seems doomed by her father’s increasingly medieval methods of getting the demon out.

You know those found-footage films where the finale is a blur of hand-held epileptic camerawork and rapid-shutter running, screaming and shadows? The last-gasp “boo” moments worked into the framework as a “gotcha” for the audience? The Last Exorcism is one of those films. Honestly, I think I’ve reached the point where these kinds of films don’t scare me more than they bore me to tears with every ratcheted focus-pull, every frightened “cameraman” whispering “I don’t think we should be here” utterance, every shadowy, jittery body twist and look of shock across cast members’ faces. Where once there were scares, now there’s just yawn, and The Last Exorcism delivered a truly aggravating film experience in this regard. While I’m a sucker for this kind of tale – demonic possession is something I’ve never experienced (and never want to) but want to understand – this film uses every trick in the book (and admittedly, that book is now much read and very tattered from overuse) to try and shock the audience with supposedly supernatural occurrences that are less effective thanks to melodramatic cast performances and a slip-shod narrative style, and becomes simply a crushing bore. By the time the “shock” ending clicked into gear, going all Blair Witch at the end, I was lost to this thing.

From a production standpoint, The Last Exorcism certainly ticks all the Found Footage Prerequisite boxes. The small-ish cast, the obligatory “film crew” along for the ride who get more than they bargained for, and of course the inevitable showdown between the real and the supernatural that spooks the hell out of everyone. The story is relatively low-key – a girl is possessed and an exorcising faker preacher (who doesn’t believe) comes along to scam a desperate family from some hard-earned in order to make a quick getaway. It’s simple enough, but the scares are in the telling; rather, the scares are in the film’s juddery, pallish shadowy blanket of eerie, and I guess if you’re easily spooked by things that go bump in the body of a young girl, then you’re gonna love this one. Director Daniel Stamm has a good hold of what makes audiences scared, I think, but here he shows a lack of restraint in drawing an effective film out of this “throw everything at the screen and see what sticks” style he’s employed. The film starts well, capturing the fractured state of Cotton Marcus’s lack of faith, and how he reasons himself through this hypocrisy to do stuff no rational person would reasonably attempt. As the exorcism itself starts, and Marcus’s fakery is shown, you kinda feel like “well, he’s about to get his comeuppance shortly” and have his faith truly tested. This happens, but not in the way you’d think.

I really enjoyed the work of Patrick Fabian as Marcus. I thought his role was (obviously) the meatiest one on the screen, and I felt for his plight as shit started to go down. I really did. It’s a pity Fabian is surrounded by a galling lack of creativity when it comes to the actual supernatural aspects of the story. The screeching, the voices from nowhere, the body dismorphia displayed by Ashley Bell’s Nell, are all potential freak-outs, and Fabian does well selling us on Marcus’s faith-arc. But the film descends too rapidly into cliche and rip-off to sustain interest, traversing genuinely interesting character development as Marcus is put to the test, to more running in the darkness and tripping over things with the camera. Ashley Bell does a good job as Nell, but again, she’s left defenseless against the onslaught of mediocrity the film’s trajectory develops. Louis Hertham (who looks remarkably like William Sadler) gets all Deep South freaky, and provides the central antagonist role in this story as the somewhat unhinged father hell-bent on ridding his daughter of the demon. Caleb Landry Jones (you may have seen him play Banshee in X-Men: First Class) has the glimmer of weird about him too, but his role is inconsequential to the plot and should be overlooked.

Stamm summons the demons for his film effort here, although I cannot account for a dire lack of interest by myself in what was transpiring: I suspect it had more to do with the rather hokey script and the contrived scenarios the film encumbers us with than anything to do with found-footage lethargy. I mean, films like this can be utterly terrifying (see REC for a prime example) but The Last Exorcism evoked more sighs and what-might-have-been’s than actual moments of tension. The fact that it performed well enough to spawn a sequel speaks more for the undiscerning cinema public than any form of legitimate creative success, but in the cold light of night as I watched this, I yearned for a found-footage film to truly transport me into a story I couldn’t look away from. As it was, I spent more time looking at my watch waiting for it to be over so I could write this review. The Last Exorcism (which, in an ironic twist, actually has a sequel, making the sobriquet of “last” completely erroneous!) runs the gamut of genre archetypes, tropes and generic plot twists – the ending steals outright from Rosemary’s Baby, the middle comes off like a True Blood/The Exorcist hybrid, and the opening sets up a Blair Witch-meets-Deliverance style endurance test. In the end, though The Last Exorcism is an endurance test to sit through, and not an entirely pleasant one at that.