Director :   Kim Ji-woon
Year Of Release :   2013
Principal Cast :  Arnold Schwarzenegger, Johnny Knoxville, Forest Whitaker, Rodrigo Santoro, Peter Stromare, Jaimie Alexander, Eduardo Noriega, Luis Guzman, Zach Gilford, Genesis Rodriguez, Harry Dean Stanton, Sonny Landham, John Patrick Amedori.
Approx Running Time :   107 Minutes
Synopsis:  When a Mexican drug lord escapes FBI custody and makes a break for the US border, it’s up to a sleepy-town sheriff and his deputies to stop him at any costs.
What we think :  Gangbusters nuts action film sees Arnie return to the big screen in a starring role of his own (after two Expendable cameo appearances) and boy howdy does it deliver some stuff. It makes no sense whatsoever to enjoy this film on anything other than a purely testosterone-driven level, because if you try you’ll be left wanting. The Last Stand is hyperkinetic, frantic, corn-fed goodness of the best kind, the kind that goes down easy after a hard day at work. It’s never going to be a classic, nor is it even entirely memorable, but for the 100 minutes it lasts, you’ll be glued to the screen.

After nearly a decade away from cinemas while pursuing a political career, Arnold Schwarzenegger returned to the big screen for Sylvester Stallone’s Expendables franchise, and now, with The Last Stand, he returns to a leading role, shouldering an action film on his own and delivering the goods in ways we’ve missed so much. Sure, the guy’s a bit saggy, his face looks more like a busted crab, and he has this weary way about him that screams “retiiiiiiire” but there’s something comfortable about seeing the Austrian Oak up on the big screen again doing what he does best: offing bad guys and cracking one liners. Only, this time, there’s less of the cornball one-liners and more flat-out killing. And when the corn does pop, it’s more often not Arnie making audiences groan. The Last Stand isn’t Oscar cinema, nor is it even very clever cinema, but if there’s one thing you can count on from Arnold, it’s damn entertaining. Smart? No. Stupid? Yes. Effective, shoot-em-up crowd pleasing? Hell yeah baby!

After escaping incarceration by the FBI, fugitive Mexican drug lord Gabriel Cortez (Eduardo Noriega) snags himself a hotted up supercar and charges towards the US/Mexico border with a female hostage, FBI agent Ellen Richards (Genesis Rodriguez). With the local cops unable to stop him, and the FBI rendered powerless by Cortez’s army of henchmen aiding him along his journey, lead agent Bannister (Forest Whitaker) realizes he has little time to come up with a plan to stop Cortez from escaping his jurisdiction. Meanwhile, a sheriff at a small border town, Ray Owens (Arnold Schwarzenegger) works the case of a recently murdered farmer, with his partner Mike (Luis Guzman), and their deputies Jerry (Zach Gilford) and Sarah (Jaimie Alexander). Coming under attack from Cortez’s henchmen, led by Burrell (Peter Stormare), Ray and his officers decide to make a last stand in their town to stop the approaching Cortex from reaching the border. Ray deputizes two locals to assist; local gun collector Lewis Dinkum (Johnny Knoxville) and Frank (Rodrogo Santoro), and with their help takes on Cortez, Burrell, and an army of mercenaries all intent on bringing them down.

All I got was this toy gun?

Like any good action film, The Last Stand delivers on exactly what it promises. There’s plenty of laughs, a whole slew of slick action, a leading man with a decent amount of attitude, and the obligatory plot twist to throw people off the scent. Throw in a couple of decent Bad Guy Deaths and you have a recipe for a decent night watching a film; The Last Stand is one hell of a fine action movie. Okay, there’s plot holes, gaps of logic wide enough to park a cargo plane, and a few moments of comedy that don’t quite work like they should, but as far as mindless action films go, you’d be hard pressed to not enjoy this one. Yeah, Arnie’s back, and it’s good to see him back doing what he does best, isn’t it? Detractors might say he makes a great actor for a politician, but having Arnie at the back end of a shotgun, gunning down nameless, faceless henchmen as he spits out those Eastwood-esque glares feels like slipping on an old pair of comfortable undies. It’s great to have him back.

The Last Stand is definitely a by-the-numbers action film; an improbable scenario, the removal of any kind of legitimate authority power in the form of the ubiquitous FBI, and an aging leading man who looks more like an abattoir cadaver than a human being, stack up the ammunition and camouflage and prepare for outright battle. The Last Stand seems to be born of the Olivier Megaton mold of film-making: shoot it as fast as possible, as loud as possible, and anytime you get to anything remotely resembling human emotion, edit the shit out of it. That’s not to say The Last Stand is a bad movie, because it isn’t. It doesn’t fit the definition of “a great film” because of the story and character weaknesses, but in a film this brash, a film this obnoxiously devil-may-care, being “great” isn’t the point. We can all sit back an marvel at the wonder of films which win Oscars and other awards, and justify it by saying that those films deserve their accolades because of some intangible thing that makes them “great”, but surely a great film one that simply entertains in some way. Whether it’s dramatically powerful, filled with pathos and emotion, or makes you tap your feet or slam your fist into the arm of your chair; film should entertain before they try for greatness. The Last Stand never tries for greatness – it knows what kind of film it is, and just goes for the jugular, expectations be damned. 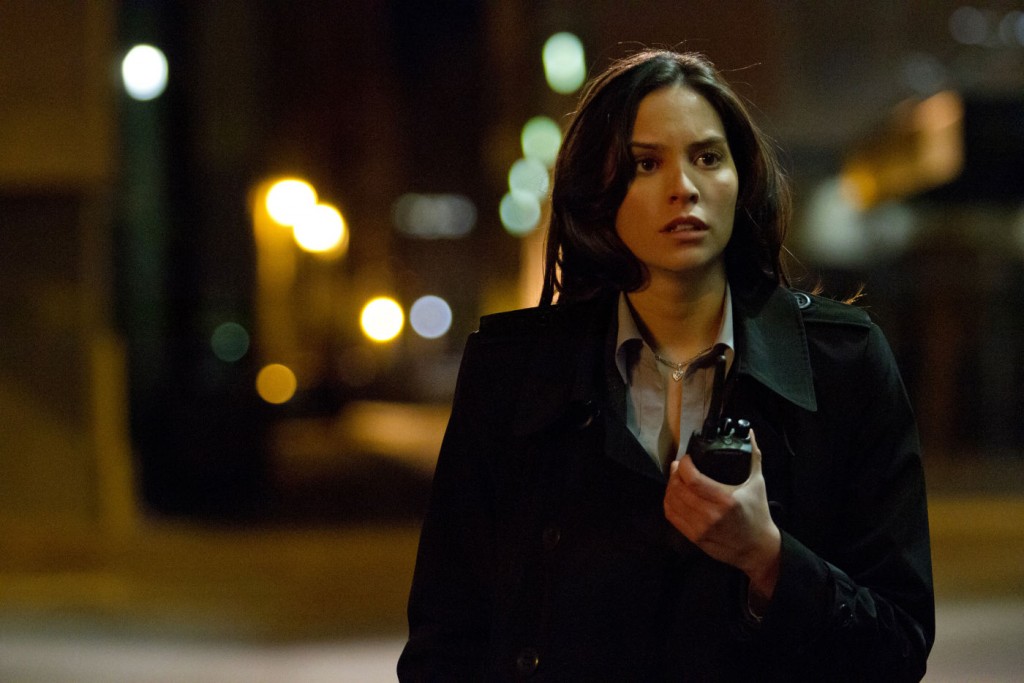 The story’s set-up is elegantly simple, although a plethora of hodge-podge contrivances do undo a lot of the good work from the early scenes. Cortez’s escape is a little far fetched, but worth at least one Ocean’s 11 gold star for brazenness. His race across state lines through the US also seems a little bit easy – this guy’s driving a sticks-out-like-a-sore-thumb supercar, and not one single cop car can catch him? I’ve seen enough Worlds Wildest Police Videos to know that even if one cop car smashes out, there’s still more following along to stop the bad guy. The Last Stand doesn’t make much sense in that respect, but for such a minor part of the plot, I’m prepared to overlook it. The film builds to the showstopping showdown in the middle of town – a completely insane shootout between the cops and the Cortez troops – most of which is violent, bloody fun, and almost entirely seems like it’s an homage to an classic Leone western, before a bonkers cornfield-led chase between Arnie and Cortez and a final bridge fight delivers the rousing, hoo-rah moment fans have been clamoring for since Arnie announced his retirement after Terminator 3. 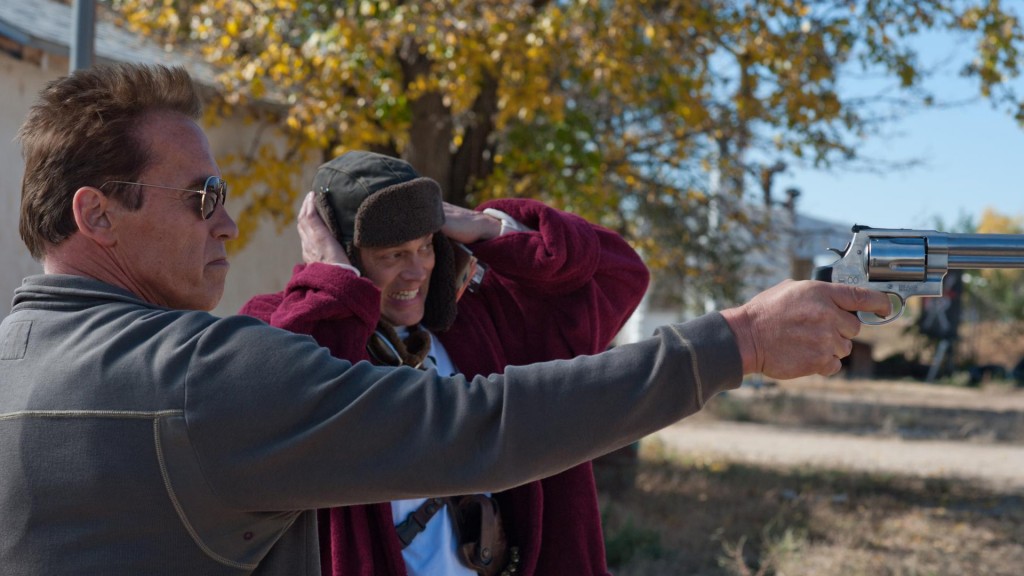 When all else fails, blow the shit out of it.

Arnie’s character, who of course turns out to be ex-special forces or some other such thing, is as derivative as they get in films like this, but that’s what makes it so much fun. It’s a shorthand character for Arnie, the kind of role he doesn’t need to work at to make us appreciate, because there’s a level of pre-ordained expectation that is met in virtually every scene as the film plays out. Johnny Knoxville, who’s given close to top billing here (but doesn’t really deserve it, if you ask me) does his usual wild-eyed-hillbilly schtick once again, has a fair few laughs, as does perennial immigrant-lite Luis Guzman, while Jaimie Alexander – and to a lesser extent Genesis Rodriguez – provide some sex appeal as the token females in this blood-fest. Peter Stormare once again does Euro-thug like it’s his only modus operandi, and Eduardo Noriega does the film’s central villain with Machiavellian suaveness. Small cameos to Predator alum Sonny Ladham, and Alien cast member Harry Dean Stanton, provide some nice touches of fan-service throughout the movie.

Not sure if I’m even gonna make it through this movie alive!!!

Key to the film being as good as it is, is the direction from Kim Ji-woon. Until now, I’d never even heard of the South Korean director, but I’m really going to have to make a point of tracking down some of his stuff and having a look. He directs the crazy, bat-shit hell out of this movie, with some crisp, razor-sharp editing and camerawork supplanting any weakness in the script with just enough bravura showmanship to make us overlook the flaws. The opening half of the film intercuts between Cortez’s escape and flight across the US, and Ray’s gradual realization of the situation as he prepares his town for battle, until the final reel blows the lid off the thing and kicks it into overdrive. Ji-woon’s camera captures all the action in frenzied, sharp detail; there’s never enough defenestrations in cinema any more, but The Last Stand provides at least one that will make you cheer just a little, while bodies are otherwise eviscerated, exploded (one moment is particularly gruesome, but outright hilarious) and shot to hell with more weaponry than a single small town should possess. There’s not really a slow moment to be had, here, with the plot moving along at a cracking pace and Ji-woon’s direction keeping this right on track. 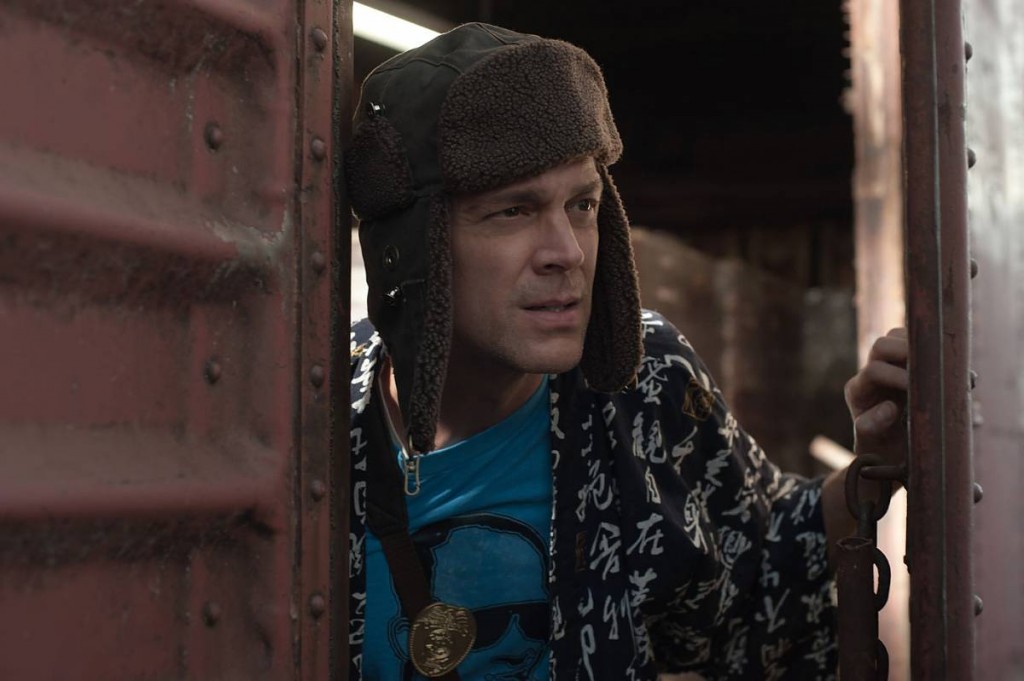 The downside to The Last Stand is, surprisingly, Arnie himself. Back in the day, this man ruled Hollywood as its preeminent action star, until his self-imposed political exile (and obligatory sexual liaison with somebody other than his wife) reduced his standing considerably. In thrusting himself back into the spotlight, it’s easy to see how time may have started to pass the Big A by – he looks tired, and you kinda get the sense that maybe he’d be better off sticking to Expendable cameos. Sure, the glint is still in his eye, but his moves aren’t as sharp, his physique isn’t as imposing, and his schtick seems to be of a time we now all consider “a bygone era”. As much as I loved seeing Arnie back up there, doing his thing, part of me felt just a little bit sorry for him, that he couldn’t see that his time in the sun was now sinking into twilight; I know cinema can make the impossible often seem feasible, but making Arnie seem like the powerhouse he once was, in The Last Stand, just wasn’t quite the same. Arnie’s comedy routine (a line about immigrants is a genuine laugh) is really half-cooked here, although thankfully he leaves most of the one-liners and pratfalls to his younger screen accomplices. Perhaps it was the film’s intent to simply showcase Arnie at his gun-totin’ best, sans glib remarks, and if that’s so, then it worked a treat, but I think that was more a happy accident than any realistic design. 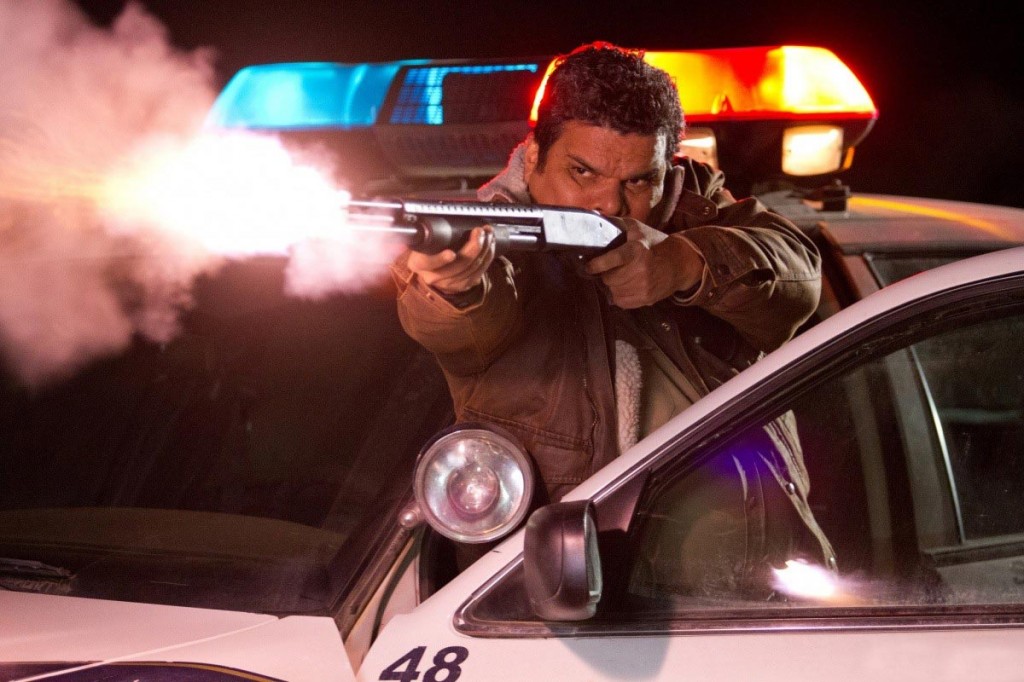 Still, The Last Stand is a magnificent action opus, efficiently delivering its bonkers story and generic characters with a slick Hollywood sheen that makes you wonder why Arnie ever left. Sure, there’s plenty of flaws the “serious” critics will point out, and no doubt in time the film won’t hold up as one of Arnie’s best efforts, but as a fast-food cinematic outing with the kinetic sensibility of an epileptic Fast & The Furious clone, The Last Stand is a blockbusting, deliriously enjoyable, utterly sexist, purely puerile brainless beating about the head.