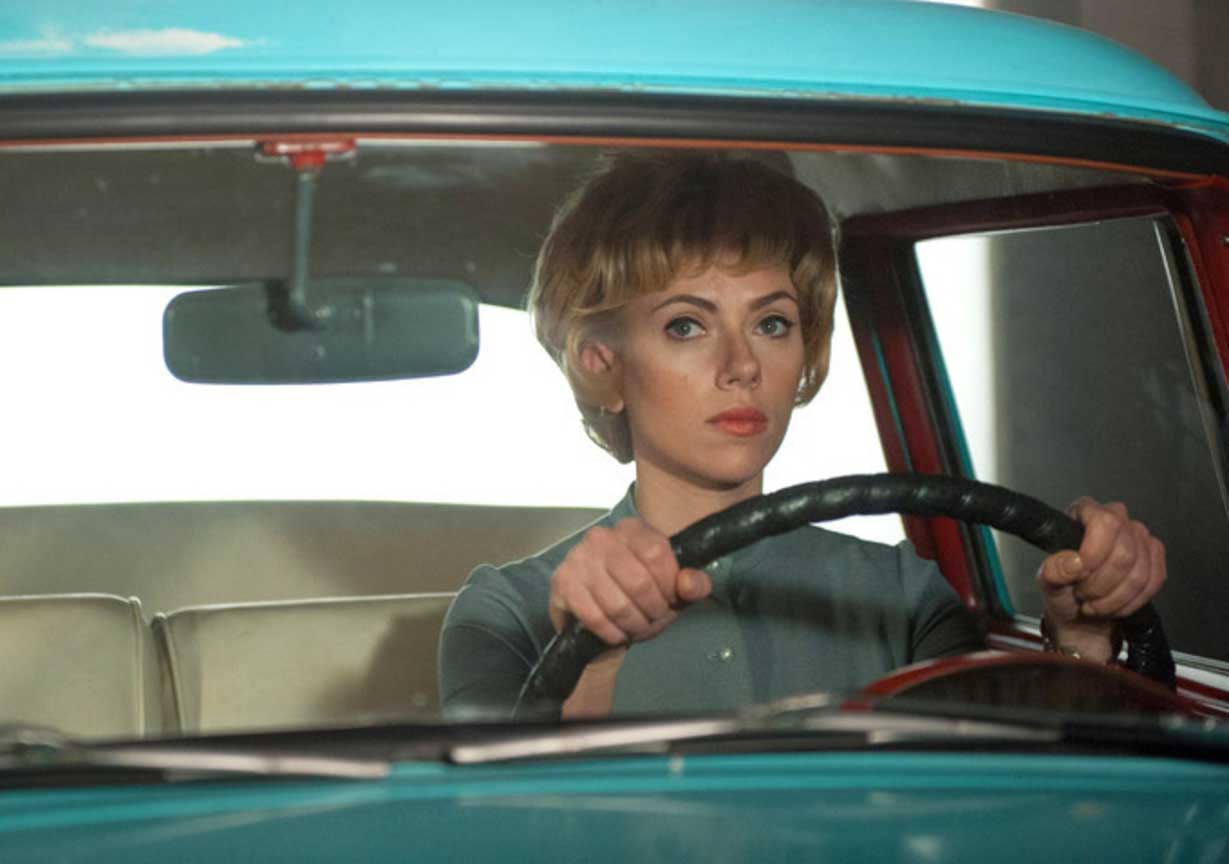 Director :  Sacha Gervasi
Year Of Release :   2012
Principal Cast :  Anthony Hopkins, Helen Mirren, Scarlett Johansson, Toni Collette, Kurtwood Smith, Danny Huston, Jessica Biel, James D’Arcy, Ralph Macchio, Michael Wincott, Richard Portnow, Michael Stuhlbarg.
Approx Running Time :  98 Minutes
Synopsis:   Alfred Hitchcock and his wife, Alma, come into conflict over the production of his latest film, Psycho.
What we think :  Essentially a terrific character piece for leads Hopkins and Mirren, Hitchcock is an utterly lovely bio-pic that meanders through fiction, fact, and outright fantasy. While Hitchcock aficionados will undoubtedly be up in arms over the cavalier way Gervasi’s film cherry-picks its moments through Hitch’s personal life – a lot of his more negative personality traits are brushed over (or avoided altogether) – the general feeling about this film is one of warm, hearty, good-humored behind-the-scenes flim-flammery. The acting is terrific, the production design immaculate, and Danny Elfman’s spot-on score works wonders as a wrap-around of cinema delight. Hitchcock is just lovely.

Peggy, I want you to gather your minions.

Alfred Hitchcock remains something of a polarizing figure in Hollywood lore. On the one hand, his work as a director speaks for itself – he’s the undisputed master of his craft, eliciting laughs, screams, chills and tears throughout his long and much chronicled career. On the other, he was a renowned letch, casting beautiful women as his leading ladies (being cast as a Hitchcock leading lady was akin to being cast as a Bond Girl) allowed him tacit ability to perv, control and in a way, subjugate them to his will, all in the name of art, you see. According to those who worked with “Hitch”, he was also known for his demanding work regime, fiery temper and highly controlling nature. Yet, his work continues to dominate all discussion of the man. Hitchcock, a film which tells of the strains on Hitch’s marriage during the production of Psycho – a film regarded by both he and many others as his best – does its very best to portray the man as something of a driven, somewhat aloof and insecure genius, while his wife Alma as a staunchly supportive figure behind the scenes. So does Hitchcock manage to elicit even the tiniest morsel of sympathy for the acclaimed director? Or is the film skewered like a butchers knife to the throat in the shower with an overburden of fictional affectations, self-references and tip-o-the-hat moments to elements of Hollywood whimsy?

Hitchcock chronicles the pre-production, production, and post-production of the film Psycho. Psycho was released in 1963 to mixed reviews but wide audience acclaim – it eventually became director Alfred Hitchcock’s most commercially successful films. Hitchcock (Anthony Hopkins) and his wife Alma (Helen Mirren) have just attended the premiere of North By Northwest, when a reporter asks Hitch if he should quit the directing game while he’s ahead. Stung by the challenge to reinvent himself artistically, Hitch decides to make his next film based on Robert Block’s provocative new book, Psycho, based on the case of serial killer Ed Gein. The lurid nature of Psycho’s story hit a nerve with Hitch, although the feelings about turning it into a film weren’t mutual by…. well, everyone around him. Even Alma questioned the motivation behind it – in order to finance such a risky project, Hitch had to waive his normal fee and fund the film himself (including mortgaging his house!), although as part of his deal with Paramount Pictures, the film would be distributed by the studio. As Hitch began to work on the project, their mutual friend Whitfield Cook (Danny Huston) tries to lobby one of his own scripts for Hitch to direct, through Alma – Whit’s relationship with Alma is explored as they begin writing together while Hitch is working on Psycho. Janet Leigh (Scarlet Johansson) has issues bringing the famed “shower scene” to life, until Hitch, having dreams about Ed Gein (Michael Wincott) interacting with him, frightens the young actress on the set to provoke a genuine reaction.

Hitchcock is a film that doesn’t seem to know which way it wants to go. As nice a film as it is to watch, there’s a sense of ambivalence towards both the central character of Hitch himself, and the making of Psycho, that prevents the film from really hitting the mark as it should. The dual narrative – Hitch’s obsession with Ed Gein and Psycho, and Alma’s dalliance with Whit as they co-author a script together – doesn’t gel as well as it needs to, resulting in neither of them being as well rounded and developed as they should. In fact, the Ed Gein moments of the film are largely superfluous to the film overall, and add nothing to the audience’s appreciation for Alfie’s state of mind at the time. You get the sense that the Gein appearances are designed to make us think that Hitch is losing it, but the end result is that they just confused me. The film also doesn’t deliver on the behind-the-scenes of Psycho’s production, a factor I was really looking forward to a lot. There’s scenes showing the filming of the movie, sure, but they exist as background filler for the real motivation for the story – Hitch’s relationship with Alma.

Anthony Hopkins is just terrific as Hitchcock. Although he may not look exactly like the famed director (a sidebar – casting James D’Arcy as Anthony Perkins, who would play Norman Bates in Psycho, was a stroke of genius: D’Arcy looks the spitting image of Perkins as a young man!), Hopkin’s vocals and physical mannerisms are dead on. It’s hard to say whether the portrayal is more pop-culture caricature than accurate essaying, but I’m prepared to give the benefit of the doubt. In any case, it’s a terrific portrayal. Helen Mirren is her usual rock-solid self as Alma, delivering a strength of character and underlying tenderness – a tenderness unmet by her focused, driven husband – and both of them sparkle in their scenes together. Come to think of it, they both sparkle as their respective characters even when they’re not on screen together.

The secondary cast are all uniformly excellent: Danny Huston, as the caddish Whit, is charmingly foppish, Toni Collette is indistinguishable as Hitch’s personal assistant, Betty, and Karate Kid star Ralph Macchio has a cameo as Psycho’s screenwriter, Joseph Stefano. Kurtwood Smith does a great job as Hay’s Code enforcer Geoffrey Shurlock, and Jessica Beil is underwritten, but effective, as Psycho’s secondary female lead, Vera Miles. Scarlett Johannson looks great as Janet Leigh, although her character trajectory doesn’t resonate like it should, largely thanks to a scatter-shot approach in the script. Michael Wincott is effective as Ed Gein, even if his character brings nothing to the films’ core focus.

Hitchcock thrives on its dialogue, most of which absolutely leaps from the screen with delight – John McLaughlin’s script is a real treat for audiences, with subtle entendres, wry humor and a sense of loving acquiescence to Hitch’s more mellifluous bombast as a celebrity; Hitch’s stiff-upper-lip Britishness often shines through, coupled with a rather creepy side-order of pervert and lecher, although these aspects of Hitch aren’t as well rounded within the overall context of the film. It’s as if the film wants to present a “good” Hitch to us, lacking the kind of darkness he must have had to bring such cinematic thrills to life – sure, there’s elements of darkness within Hitchcock’s relatively brief running time of 90 minutes, but they don’t give us much to go on. They just…. exist, almost as if the film is trying to avoid them in the first place. But the terrific performances and razor-sharp dialogue more than counteract this failing. And even if you don’t like the film, it’s worth it to hear Hopkins say “You may call me Hitch. Hold the cock.”

I’m not quite sure of the reasoning for softening the harshness of the real Hitch’s darker side. The film’s ambivalence to his lecherous nature, his dalliances with his leading ladies and the fractures this must have caused his marriage, are given a prominence within the film that just doesn’t get to the root of the matter. Alma’s apparent acceptance of this side of Hitch’s personality isn’t explored in any meaningful manner, which is disappointing. Given the primary focus of the film is the relationship between Hitch and Alma, you’d expect any problems with their marriage would be explored in more detail – the arrival of Janet Leigh into the frame, as well as Whit’s somewhat obvious flirtation with Alma are hinted at, touched on, but ultimately discarded as significant issues, and this keeps Hitchcock from being a better film. It’s like Gervasi is determined to give us the best possible Hitch he can, although in sweeping a lot of the more salacious elements aside in favor of a charming, “misunderstood genius” Hitch, it causes the film to become lopsided in tone and execution.

All that being said, there’s something wonderful about the way Anthony Hopkins and Helen Mirren go about their business that makes it all worthwhile. Hitchcock isn’t as deep-and-meaningful as one might have expected, but as a love-letter to the man, and the film which changed modern American horror, it’s hard to argue against. The film’s production value is exemplary – there’s not a hair out of place or a costume that doesn’t look terrific – and Danny Elfman’s score evokes the pomp-pomp-bump-bump facade Hitch gave audiences through his television show. All said, Hitchcock seeks to rose-colored tint a period in Hollywood history that gave us Psycho, one of the great American films; the film is not without flaws, but I’ll be damned if it’s not an amusing, wry look at one of the more divisive directors the medium has ever produced.