Director :  Rian Johnson
Year Of Release :   2012
Principal Cast :  Bruce Willis, Joseph Gordon-Levitt, Emily Blunt, Paul Dano, Piper Perabo, Jeff Daniels, Noah Segan, Pierce Gagnon, Xu Quing, Tracie Thomas, Garret Dillahunt.
Approx Running Time :   112 Minutes
Synopsis:  In the future, criminals use prohibited time travel to send people they want killed back to the past, where specially designated executioners – known as “Loopers” – kill them and dispose of the bodies. When one looper’s future self is sent back to the past, it sparks a chain reaction that will have consequences for everyone in the future; and only the younger looper can stop it.
What we think :  Twisty plot be damned – Looper is one of the best films of 2012. Rian Johnson brings us a taut, tense sci-fi outing with Looper, featuring crazy-good performances from Joseph Gordon-Levitt and Emily Blunt, while Bruce Willis provides excellent support. The twisty, bendy time-travel concept it turned on its ear (this sure ain’t Doctor Who) and given a real jab in the arm of adrenaline; Looper is fresh, interesting, and highly entertaining.

Bruce Willis fights the one person he cannot defeat: himself.

Folks approaching Looper for the first time will probably read the synopsis on the DVD and put the movie back on the shelf, especially if they’re not a sci-fi fan. This would be a disservice. Looper does involve some mind-bending time travel science to bolster its complex plot, but a university degree on fourth-dimensional physics isn’t required to enjoy the movie; if anything, there’s enough background info on time travel in the script to allow even the novitiate to this genre understand what’s going on. While Looper might feel like a grittier, more brutal Back To The Future flick, it’s much more than what you expect – it’s a powerful, razor-sharp, leanly directed film that pulls no punches, delivers visceral excitement, and grabs your imagination with both hands. If you’re reading this and thinking to yourself, “dear Lord, not another sci-fi movie my husband’s going to want to watch”, and you’re silently nodding at that very statement, please allow me a few moments to try and persuade you – regardless of your fondness (or lack thereof) for science fiction – to give this film a go. 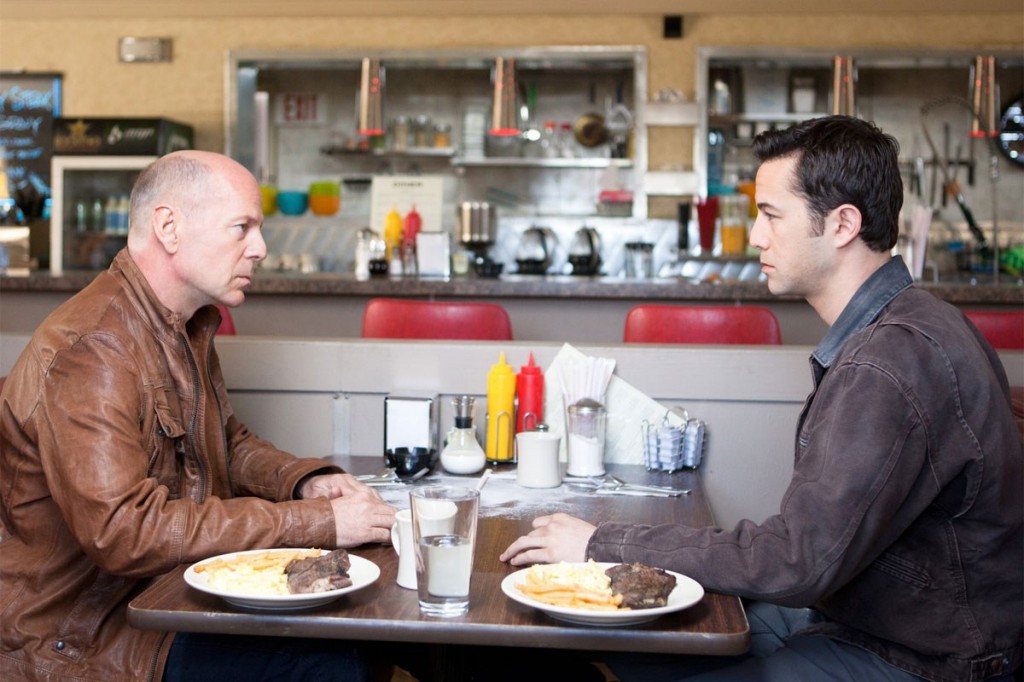 Look son, are you going to give me the car keys or not?

In the future, time travel is invented. It is also immediately outlawed, leaving the technology to fall into the hands of powerful crime gangs. Due to a future inability to adequately dispose of the bodies these gangs need to be rid of, a scheme is developed whereby future dwellers are sent back in time to become “Loopers”, who execute those the gangs want to be rid of in the past, before they’re born, so they can be disposed of cleanly. However, at the end of a Loopers contract (with each execution they perform, they receive payment in silver), their own future self is sent back to be killed, effectively “closing the loop” – the upside to this is, the final payment is in gold bullion, allowing the younger Looper to live out the remaining 20 or 30 years of life in relative comfort, before being picked up to be sent back and killed. When one Looper, Joe (Joseph Gordon-Levitt) sees one of his friends, Seth (Paul Dano) refuse to kill his future self, and the consequences that play out from that, he is shocked to discover that his own future self is sent back – before Joe can kill himself, his older self (Bruce Willis) scarpers. Joe learns that Old Joe is hunting three children, one of whom grows up to become the powerful Rainmaker, a man who brings civilization to a grinding halt in the future, and Old Joe means to kill him as a child, changing the future. One of the children Old Joe is hunting is living on a farm, with his mother, Sara (Emily Blunt), who herself is hiding a greater secret than even Joe can fathom; when he arrives seeking help, and uncovers old Joe’s plan, he decides to help, even though he risks being captured by his boss, Abe (Jeff Daniels), who has sent a group of mercenaries out to track him down. 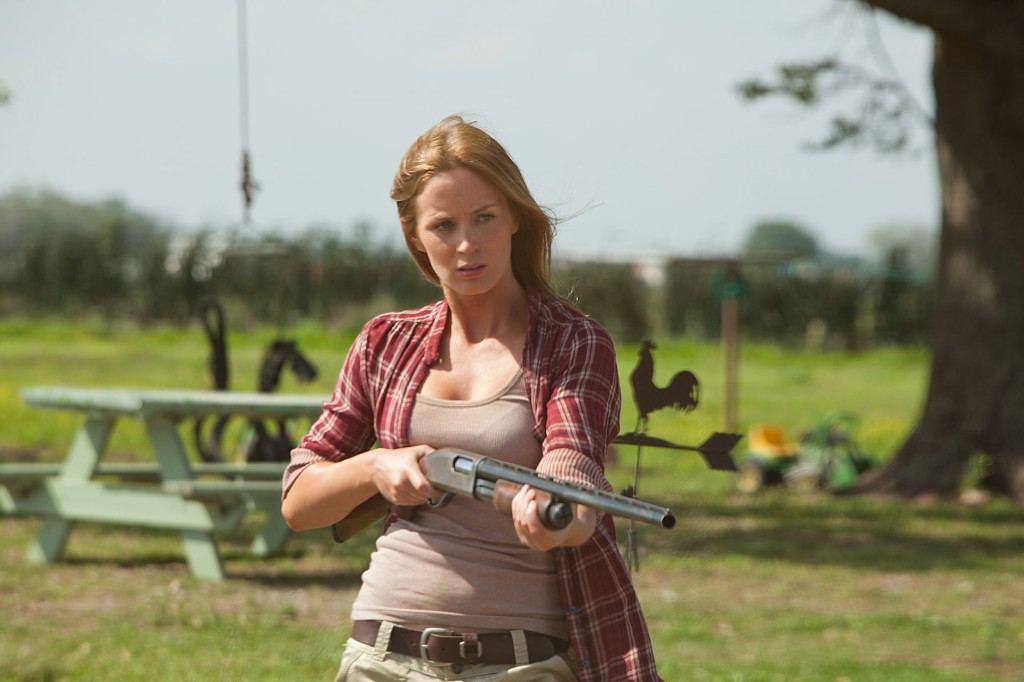 Sound convoluted? Confusing? My piss-poor summary skills notwithstanding, you’ll go a long way before thinking that Looper is too complex for all but the most dull minds to comprehend. The story, brought to life with Johnson’s almost breathtakingly simple script, and his equally keen direction, manages to be effortlessly immersive and accessible, allowing the the “where did that come from?” aftertaste to hit home hard when you watch it. Looper’s sci-fi breeding isn’t the point of the film, really. Instead, Johnson’s crafted an action film within a dramatic one – no mean feat – and with the script’s nuanced, flavored balance between hard-hitting violence, conundrum-inducing time travel science and emotional dramatic impetus giving this film an independent feel while at the same time coming across like a big-budget blockbuster, it’s little wonder Looper has been met with near universal acclaim. Johnson, who wrote the script as well as directing the film, effortlessly weaves themes of sacrifice, loss, fate and predestination into the story, topics with which science fiction has build up a substantial legacy with, although here they seem refreshed, as if Johnson’s tapped into a new well of ideas and he’s drilling for all he’s worth. 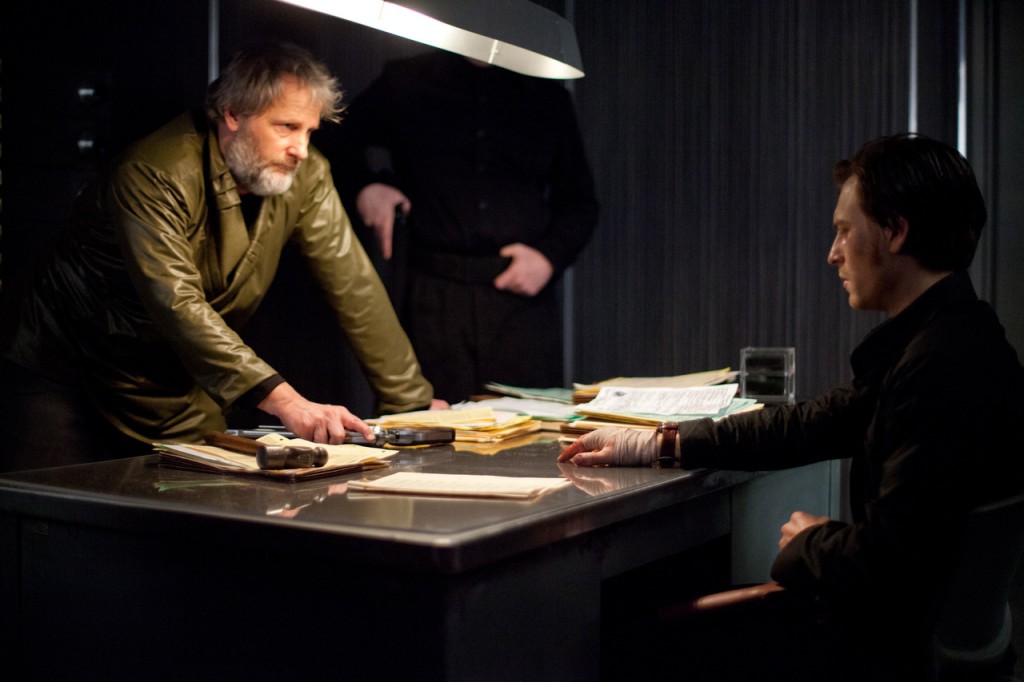 One of the most surprising, and enjoyable, aspects to Looper is just how well the character beats are balanced out. While the characters themselves aren’t as well developed as maybe they could be, Johnson provides us with enough back-story, enough motivation, enough energy on each of them to overcome any deficit his highly strung script might deliver. The central character of Joe, played by both Joseph Gordon-Levitt (with facial prosthetics) and Bruce Willis, is initially a fairly single-minded, drugged-up dude, who grows throughout the film as he races towards his final destiny with the young boy, Cid (Pierce Gagnon) on the farm. He fights his future when he knows it to be bad, Joe does, and the key plot twist is that his older self knows exactly what his younger self does only moments after he does it; what happens in the past (the present), affects the future (the present as well). When young Joe is injured, that injury appears on Old Joe. The back-and-forth narrative, following both the Young Joe and Old Joe plotlines, is delicately handled, with Johnson ramping up the tension when it becomes apparent that Old Joe isn’t going to stop with just a “please”. The intercutting between the two, as Old Joe tries to evade capture, and Young Joe spends time recovering from injury on Sara’s farm, allows the plot to bubble to a gentle simmer, and the characters to flex themselves dramatically within the framework of the concept. It’s a really well thought-out script, handled with great nuance by Johnson. 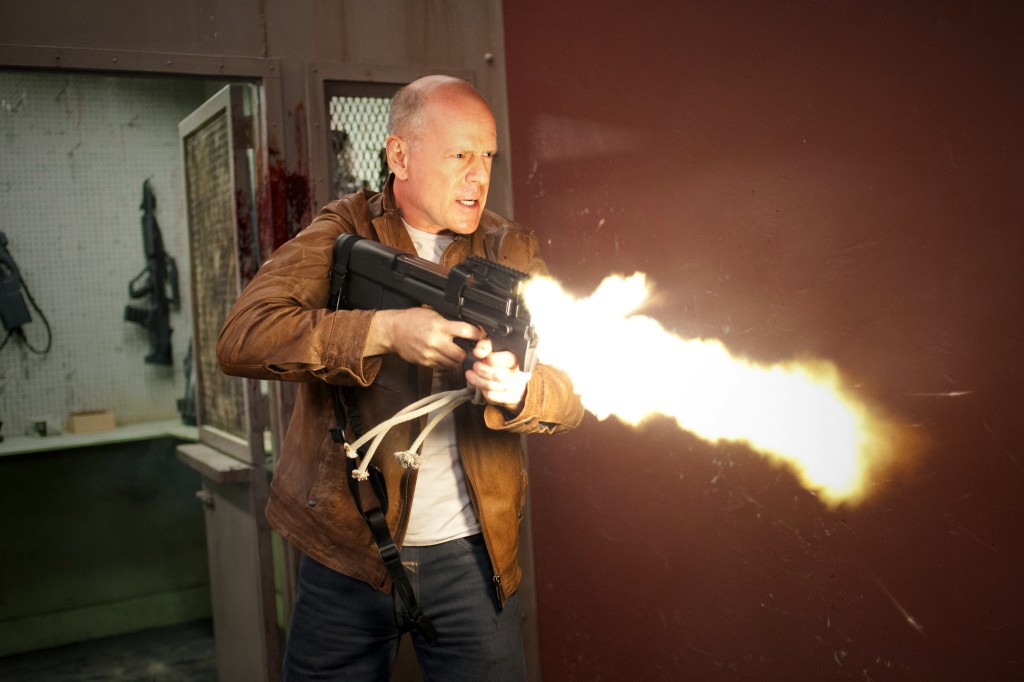 Excuse me, my gun just farted….

The cast all produce the goods in Looper – there’s not a bad apple among them. Gordon-Levitt and Blunt are easily the better aspect of the dual narrative, with the pair of actors producing eyebrow-raising portrayals of vastly different characters. Jo-Go wears a prosthetic to look like a younger version of Bruce Willis, and instead of seeming creepy and weird, it works. Gordon-Levitt manages to overcome the limitations of make-up to really inhabit the soul of Willis: mannerisms, his way of standing, bending his head, and talking, all feel like a younger Willis. Willis, meanwhile, does little except do what Willis does best – shoot people, blow shit up, and make it look awesome while he’s doing it. You don’t get Bruce Willis for his emotional range, you get him for his ability to craft a believable character out of somebody so inwardly focused, so inaccessible to the audience, that we can actually access him, feel him, throughout the move. Emily Blunt, as Sara, comes to the film late, but makes her mark with a credible Southern Gal characterization that’s so far against type for her, it crosses parody and jumps back into serious dramatic actress territory again. Her character has a hidden pain, and Blunt delivers it well, although by the end of the film she seems to become another stock genre character. 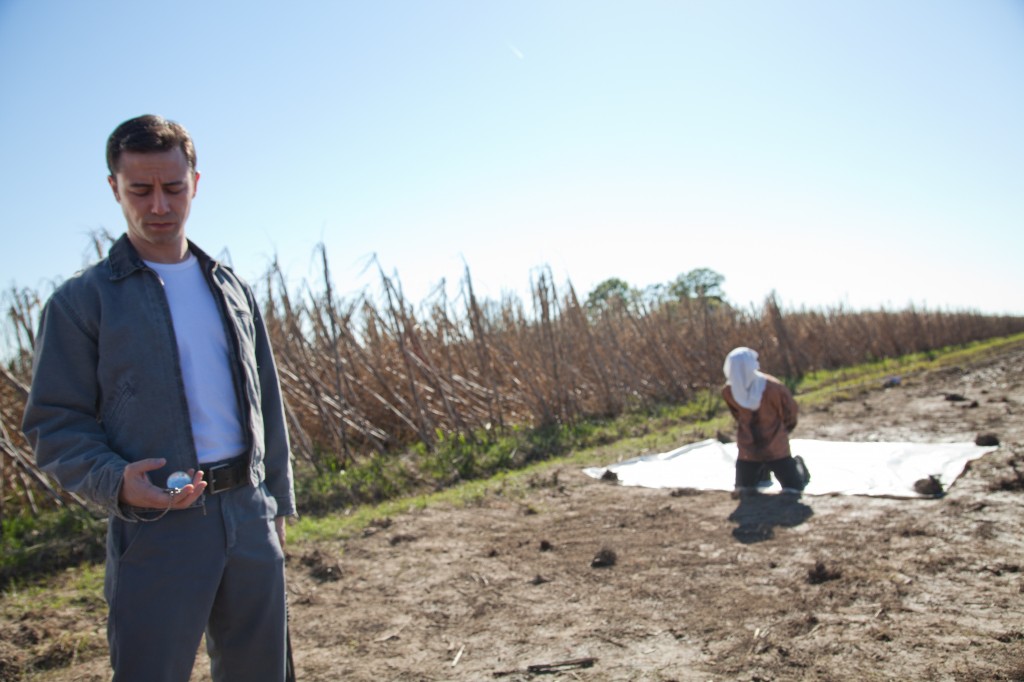 Can we hurry this up, dude? I have somewhere I need to be….

The bit-parts, particularly Jeff Daniels as the crooked and powerful Abe, and Paul Dano, the latter of whom meets a truly grisly and affecting end, are solid enough, although in the end these characters are simply a means to Johnson’s end. Piper Perabo, who gets her top off in this film, plays the “honest whore” role of Suzie as well as she can, while Noah Segen is screechingly madhouse as one of Abe’s men bearing a grudge against Joe. The young lad, Pierce Gagnon, as Cid, is about the only weak part of the film – he’s a good actor for such a young boy, but you can still see him performing. Sometimes, though, he brings an innocent reality to the role, and you actually start to believe his character exists, before the next scene drags you out again. 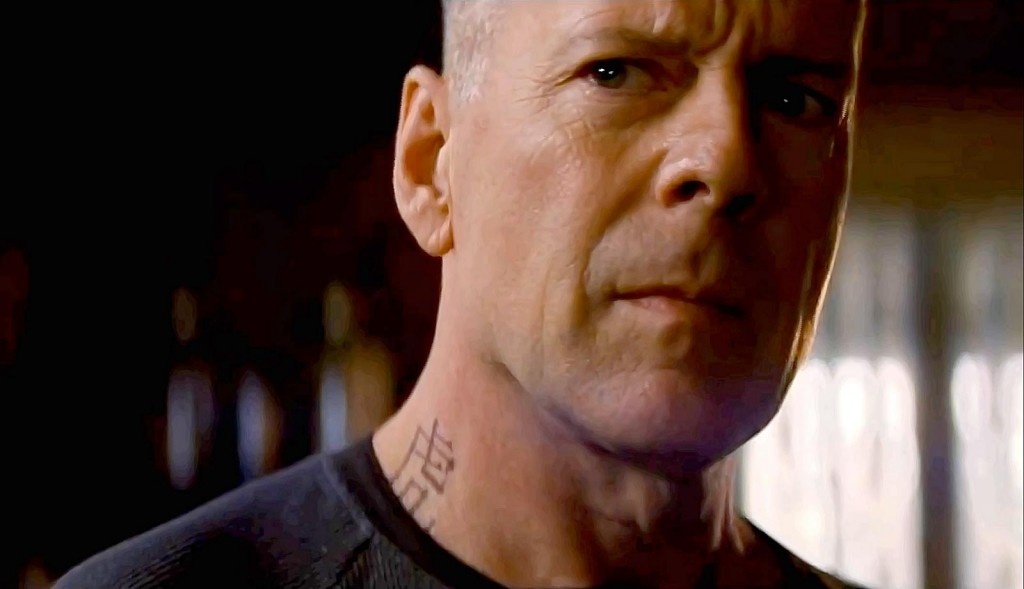 Looper is a film with not one ounce of fat on it. Every scene, every line and every shot in the film serves to movie the story forward, propelling the narrative to its ultimate conclusion. Such is the brevity of Johnson’s script, and such is his story-telling craftsmanship, that were a part to be removed, the film would be infinitely lesser for it. Looper is a dynamite film that should warrant a viewing regardless of your appreciation for science fiction. It’s a sharply written, well directed action film with heart, the kind of immersive, world-building stuff many directors can only dream of, and Johnson should be praised for it. You’ll have to go a long way to find a better film – sci-fi or not – from the last few years.