Director :  Troy Nixey
Year Of Release :   2011
Principal Cast :  Guy Pearce, Katie Holmes, Bailee Madison, Jack Thompson, Alan Dale, Julia Blake, Garry McDonald, Nicholas Bell, Trudy Hellier.
Approx Running Time :   99 Minutes
Synopsis:  A little girl is terrorized by creatures from the basement when her father and his girlfriend move in to restore a giant Gothic mansion.
What we think :  Heart pounding, genuinely chilling fright-fest from the brain of Guillermo del Toro, who produced. The story is frightening (especially for parents) and the production design (especially the rat-like creatures involved) is terrific, even if the decision-making by the central characters leaves a lot of yelling at the screen to be done: Don’t Be Afraid Of The Dark is advice you should definitely not take. This film is dynamite.

When your kid says there’s monsters in the basement, you damn well better believe it.

If there’s ever such a thing as a misleading title, the one for this film is definitive. Be afraid of the dark, definitely, but in doing that, you should watch this film for the sheer thrill of it. Don’t Be Afraid Of The Dark, produced by Guillermo del Toro and based on the 1970’s television movie of the same name, is an Australian made production featuring former Mrs Tom Cruise, Katie Homes, Guy Pearce, Jack Thompson (who still can’t produce an American accent to save his life!) and newcomer Bailee Madison, who provides a performance well beyond her years for this creature-fest. At times creepy, at times chilling, and altogether entertaining if you like being scared, this trip into the Dark will have you ducking for cover beneath the sofa cushions and clawing at the arms of the one you love. 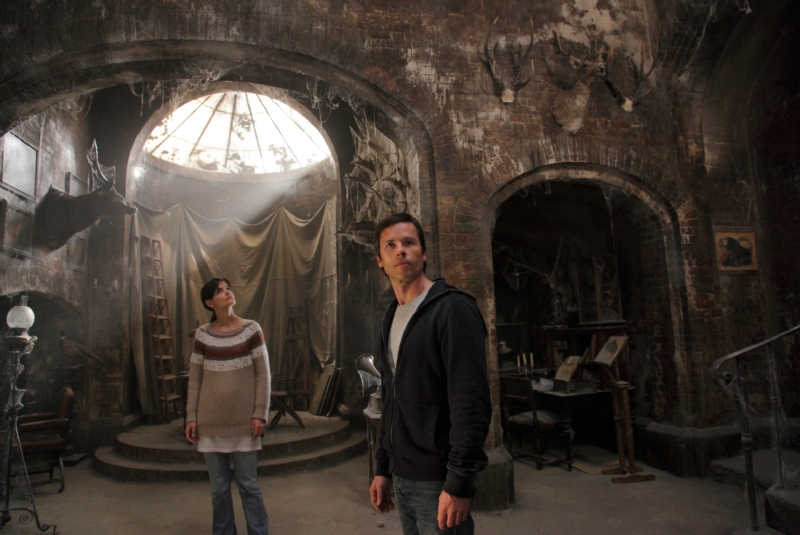 Wow, this is some spooky basement right here, y’all!

Sally (Bailee Madison) is sent by her mother to live with her father, Alex (Guy Pearce) and his girlfriend, Kim (Katie Holmes), both of whom are remodeling an old Rhode Island mansion, Blackwood Manor. The previous owner, a famous artist named Emerson Blackwood, disappeared along with his young son nearly a century before, although the exact reasons for that have never come to light. As Sally explores the manor home, she hears voices through the ventilation pipes telling her that if she just comes down to the basement, those down there will be her friends. Sally, isolated from her mother, discovers strange creatures living in the ash pit below the fireplace in the basement, although their intentions aren’t as pure as she was led to believe. Sure enough, the tiny creatures try and drag Sally into their hole, and although at first Kim and Alex don’t believe her fanciful tales, as events start to take on a menacing and horrific nature, they soon realize that they are all in mortal danger. 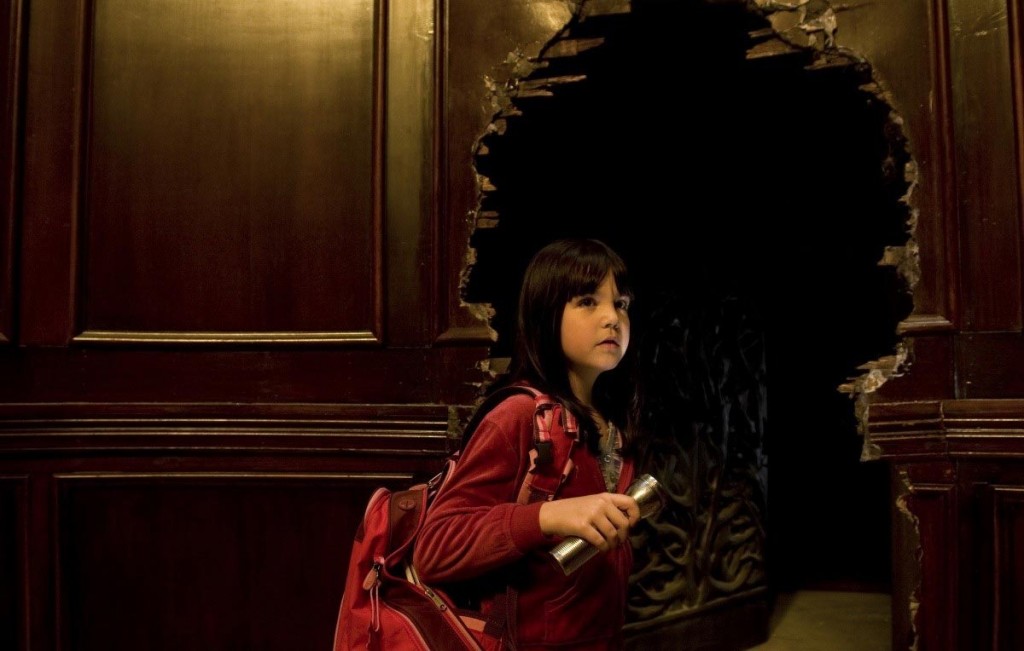 Hey, why is there a hole in our house?

You know how in most horror or pulp-thriller films, when the main characters are in mortal danger, nobody will believe them? Pacifying their hysterical rantings with pills and dimly lit rooms of sanctuary? It’s the stuff children’s nightmares are made of. I know I had similar when I was a kid (a particular nightmare I had, of R2D2 trundling up the garden path to take me away to see Darth Vader, was recurring until I learned that the character had a tiny dude inside, and wasn’t a real robot)  where nobody I yelled out to either heard me, or believed me. Don’t Be Afraid Of The Dark taps into that primal fear by setting a young girl in the path of some violent, nasty underground creatures and making the adult figures in her life both daffy and stupid. Although Katie Holmes comes around quick enough, I guess. That damn Guy Pearce, though, he’s obviously never seen as scary movie before. When the kid looks up at you, trembling and crying, and says there’s monsters in the basement and they’re trying to take him/her away with them, you’d better believe that kid and get the hell out of the house. Creepy, creaking mansions are always unsettling to audiences at the best of times (although, if you’ve sat through The Haunting, you’ll know what’s not always true), and Don’t Be Afraid Of The Dark delivers one hell of a terrifying house. 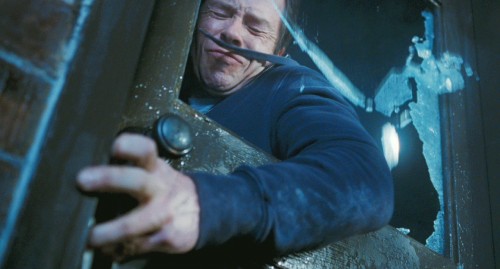 No, this door most definitely WON’T open!

This film is actually a remake from a 1973 television movie starring Kim Darby and Jim Hutton, although I can’t claim to have ever seen it – apparently it became something of a cult flick in the years since release. Not being aware that this Dark was a remake, I found myself with no preconceived ideas or notions as to whether it stacks up against the original – I’d say it does, because this is a modern day thrill ride, while the television standards of the early 70’s in the USA would probably leave a lot to be desired by way of comparison. 2011’s Dark contains the same basic premise, although some of the plot devices and characters are modified – in this version, Sally is a child, whereas in the original, Kim Darby was an adult; according to producer Guillermo del Toro, the decision to make Sally a young child was designed to heighten the panic of not having adults believe you (which they normally don’t) in moments of crisis. 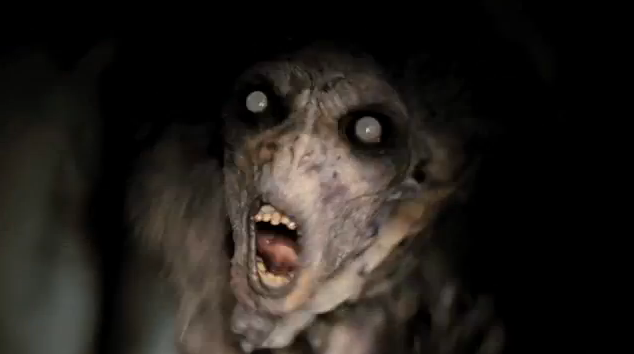 Bailee Madison, as Sally, seems a tad wooden at first, with a grunting, I-know-I’m-in-a-movie performance to open the movie, before giving a genuinely heart-rending one in the final act. The girl knows how to act terrified, and she absolutely nails the soul of this character. Guy Pearce is dependably stoic as Alex, her father, although his often dunder-headed and pig-headed behavior towards his daughters irrational behavior – sure, drug her and make her sleep it off, right dad? – seems a tad unnerving, until the shit hits the fan and he is forced to act when he realizes that the threat is real. Katie Holmes brings added believability to her role with a soft, nuanced portrayal of a woman who isn’t Sally’s biological mother, yet who becomes a mother to her when it counts. Holmes carries the film when Madison isn’t on-screen. Aussie acting stalwart Jack Nicholson does his gruff hard-man routine once again, although as usual he’s not able to fully grasp the concept of an American accent, instead giving us something halfway between an Aussie one, a Kiwi one, and something like the Deep South. Fellow Aussie actor made good, Alan Dale, plays a small role as a property tycoon of sorts, although he adds nothing to the film. Garry McDonald, whom most folks might remember was one third of the musical troupe composing the production in Moulin Rouge, sends shivers up the spine early as Lord Blackwood, whose fateful disappearance into the basement fireplace send this film spinning off on its inevitable trajectory of terror. 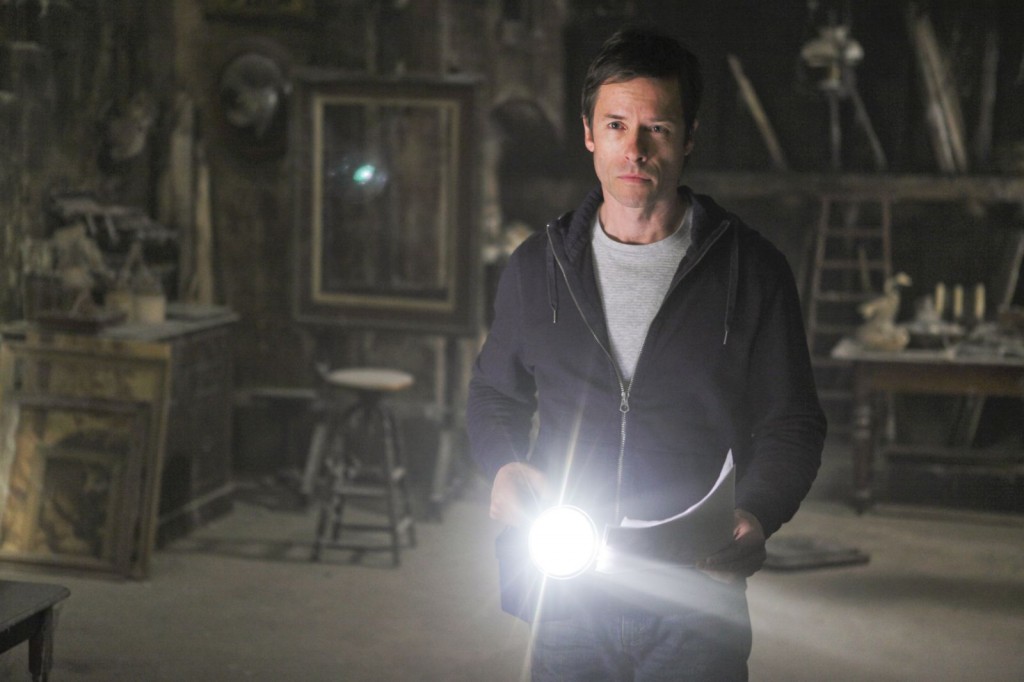 Say, you ever thought about putting a new window in over there?

Where the film succeeds primarily is in the production design. This is a technically proficient production, using some amazing cinematography, use of shadow and light, a pulsating sound design and some genre-bending musical score (by Marco Beltrami and Buck Sanders); Don’t Be Afraid Of The Dark really puts you into the dark, and doesn’t let you go. Director Troy Nixey uses every trick in the book to creep us out – jump-cuts, flash-bang edits (editing by Bazz Lurhmann’s chopper du jeur, Jill Billcock) and some genuinely menacing monsters – the little faerie creatures that come up out of the dark – to send tingles, shivers and chills down your spine at every opportunity. Bixey gets that you need to keep the monsters hidden as long as you can, but he also knows (perhaps with some help from del Toro, who co-scripted) that you also need to let the audience see what the monster looks like at some point; here, the monsters keep to the shadows (like Gremlins and Mogwai, these creatures don’t like the light) but we get enough glimpses, enough hints and rapid-cut close-ups, to build an image in our minds well before the full reveal ever comes along. It’s a slowly, slowly mentality from Bixey, and it works a treat. These monsters are freaky and creepy – exactly what a good scary movie needs. 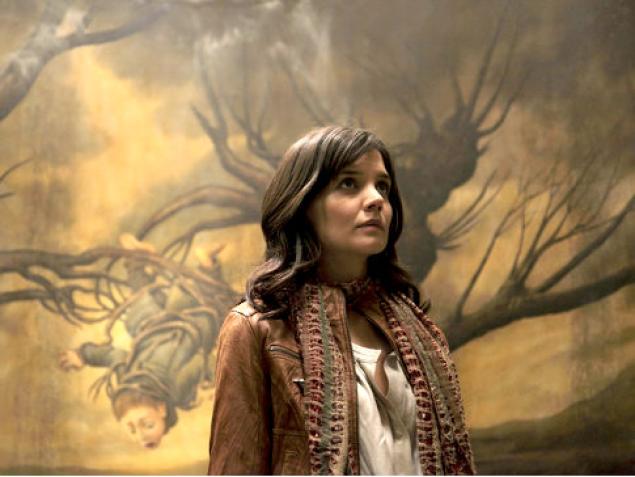 Say, this spooky painting is…. spooky.

I wasn’t expecting to really enjoy this film as much as I did. I normally yell at the screen when characters in these kinds of films do stupid stuff like not turn on the lights when they enter a dark room, or call out to somebody when they know it’ll draw the monsters to them, or forget that windows to escape can be smashed, and don’t always have to slide open. You know, Horror 101 stuff. Don’t Be Afraid Of The Dark has a few of those moments, and for a few seconds here and there I was nearly throwing my remote at the screen in frustration with Guy Pearce’s character’s refusal to see the obvious distress his family was suffering, but inevitably, he figures things out; this is probably the film’s only real weakness, aside from some dodgy accents and a complete disregard for the rules of a horror film. When the old man in hospital tells you to “get the girl out of the house”, the first place you should go is back home, not to the library (which is what Katie Holmes does, because crazy old men in hospital, who’ve nearly been killed by these creatures, obviously have no f*cking clue what’s happening). 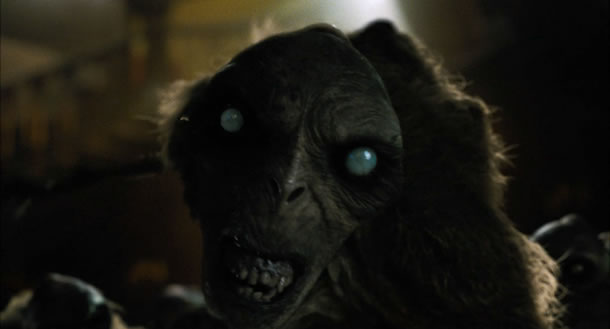 Don’t Be Afraid Of The Dark sneaks up on you and scares the shit out of you when you’re least expecting it. It’s a fun time being terrified, even if some of it might not make sense logically. The design of the film is excellent, the performances are all great considering the genre of story being told, and the direction from Bixey is first rate. I couldn’t really find many flaws that would prevent a decent recommendation from me, so I’m giving it an appropriate rating down below! If you love a good scare, and enjoy that tingly up the spine effect, then do yourself a favor, grab Don’t Be Afraid Of The Dark, turn off the lights, turn up the volume, and get set for plenty of hiding behind the quilt.