Director :   Neveldine/Taylor
Year Of Release :   2012
Principal Cast :  Nicolas Cage, Johnny Whitworth, Fergus Riordan, Ciaran Hinds, Idris Elba, Violanta Placido, Christopher Lambert, Anthony Head, Jacek Koman.
Approx Running Time :   95 Minutes
Synopsis:  Johnny Blaze tries to protect a young boy from the forces of darkness, during which time he makes a deal to rid his body of the Rider’s spirit.
What we think :  Terrible, lamentable thing posing as cinema, this “film” is an incoherent disaster of monumental proportions. With a story so inconceivable it’s a wonder any studio green lit this thing, and creative film-making decisions that beggar belief as “professional”, this sequel to the abortion of a film known as Ghost Rider is equally as dreadful. One of the worst films I’ve ever had the displeasure to watch – and that’s saying something.

While I can’t say I’ve ever been a fan of Ghost Rider, I can recognize a cool concept when I see one. It’s a shame, then, that directorial shock merchants, Mark Neveldene and Brian Taylor (Crank, Gamer) were let loose to helm the completely unnecessary second film in the appallingly produced Ghost Rider franchise. Never before has a comic book concept been so completely screwed over as it has with both this film, and the original. Ghost Rider: Spirit Of Vengeance is so bad, I’m typing this review as the film is still playing, that’s how much respect I’m prepared to give it. It’s a turd of a film, a soul-sucking, incoherently noisy, confused effort with little grace and even less legitimacy as a “film”. I can’t call it a serious feature film because not one single element of this thing deserves the label. From the story, the script, the performances and the visual effects; every aspect of Spirit Of Vengeance is simply awful. 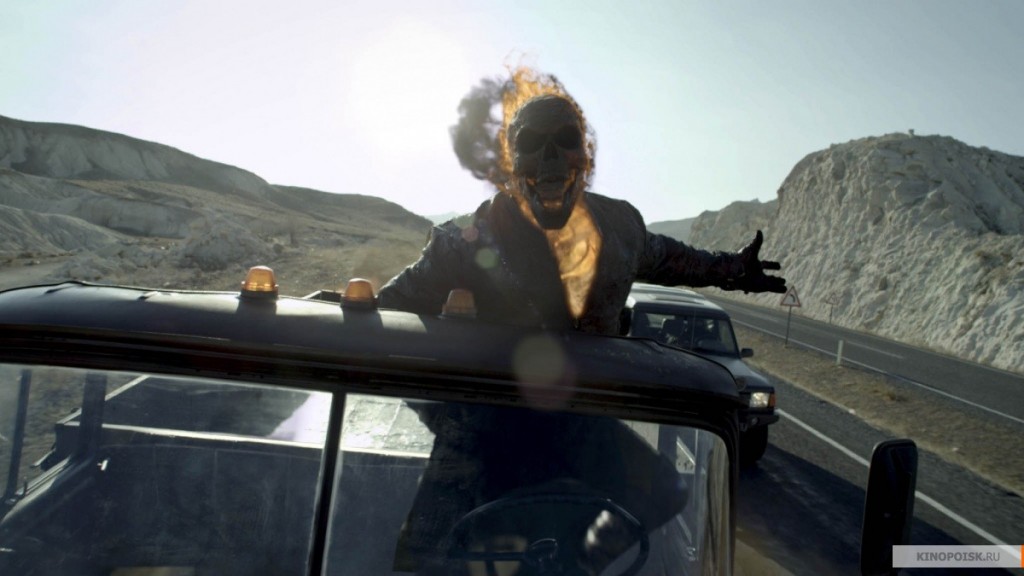 This film is shit.

Rather than explain the story – mainly because I didn’t understand it – I’m just going to keep ripping into this film. Some people might say that ranting about a bad movie does nobody any good, but I beg to differ. It’s cathartic, getting one’s feelings about a dogshite movie out of one’s system. In the case of this film, a good rant is deserved, and I make no apologies for it. The basic premise is this: Johnny Blaze (Nic Cage), is trying to escape his tortured double life as the Rider, while his mission to protect a young boy (Fergus Riordan) and his mother (Violanta Placido) from the clutches of her ex-boyfriend, Carrigan (Johnny Whitworth) and the Devil known as Rourke (Ciaran Hinds), who wants the lad for his own nefarious ends. Honestly, this film lost me. Incoherence for the sake of style works really well in music videos, but dies a slow, tortured death on the big screen, where story is paramount. Spirit of Vengeance has so little story working in its favor, it’s a wonder the film was even released. I watched forty minutes of it and had asbolutely no clue as to what I was supposed to be watching – Neveldine and Taylor’s usually garrulous visual style feels like it’s been neutered by an epileptic seizure in the editing room, with a sound mix designed to literally wake the dead from whatever cemetery is nearby. This film is loud, obnoxious, and a complete disaster. 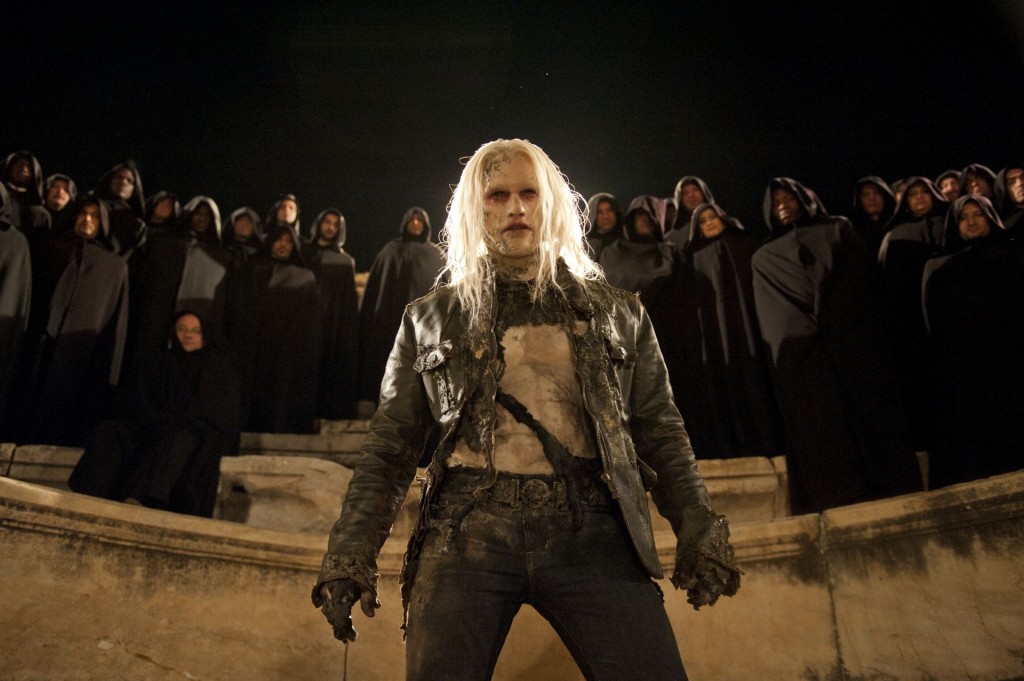 This film is shit!

I’m still not sure what drugs Nic Cage was on when he made this thing, because his performance is so schizophrenic and loony-toons crazy it moves beyond funny and into scary. Johnny Whitworth, as the malevolent Carrigan, is crazy too, but in that stupid Bad Guy who doesn’t flinch even in the face of death way that makes no sense at all. Ciaran Hinds picks up an easy paycheck as Rourke, filling in for Peter Fonda, who had the good fortune not to be involved with the continuation of this franchise. Idris Elba, who rocked it in Thor and made me laugh a little in Prometheus, seems stuck in the same school of “can’t act” as Cage, with a singularly one-note performance in keeping with the script. Speaking of script, there’s so many concepts and unexplained ideas going on here, the film makes as much sense as Paris Hilton in a university. None whatsoever. The overdose of stupidity overwhelms the already thinly-plotted material, grinding on and on like an out of control train, a train which cannot be derailed no matter how much one might want. 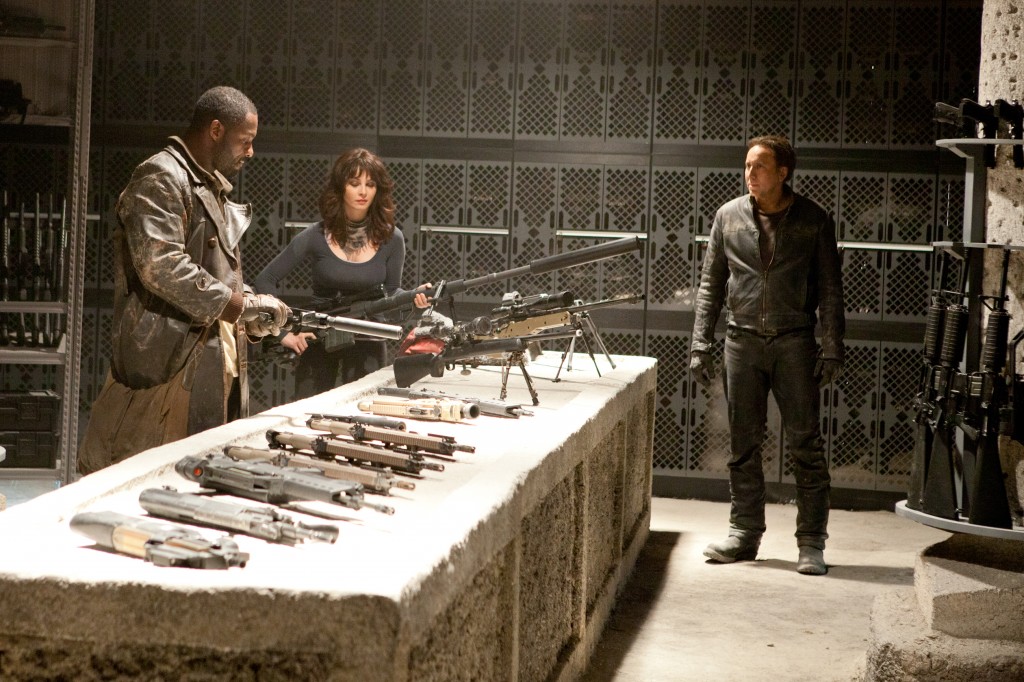 Spirit Of Vengeance tries for style, tries for comic book greatness, but with the Nevedine/Taylor combo behind the camera, subtlety and coherence are as present here as they might be at a death metal concert. Come to think of it, Spirit of Vengeance looks and sounds like a bad death metal band fornicated with a high definition camera, and this film is their spawn. Editing is frenetic, camerawork borders on seizure-inducing, and much of the CGI lacks realism (at least the effects in the first film looked great – here they just look fake), only adding to the woes of watching this miasma. The soundtrack – music, I think most people might call it – thunders like a cacophony of instruments all vying for attention, creating a raucous, consistently bad aural score that provokes a headache more than anything else. To think I purchased all my subwoofers only to let a film like this run through them. 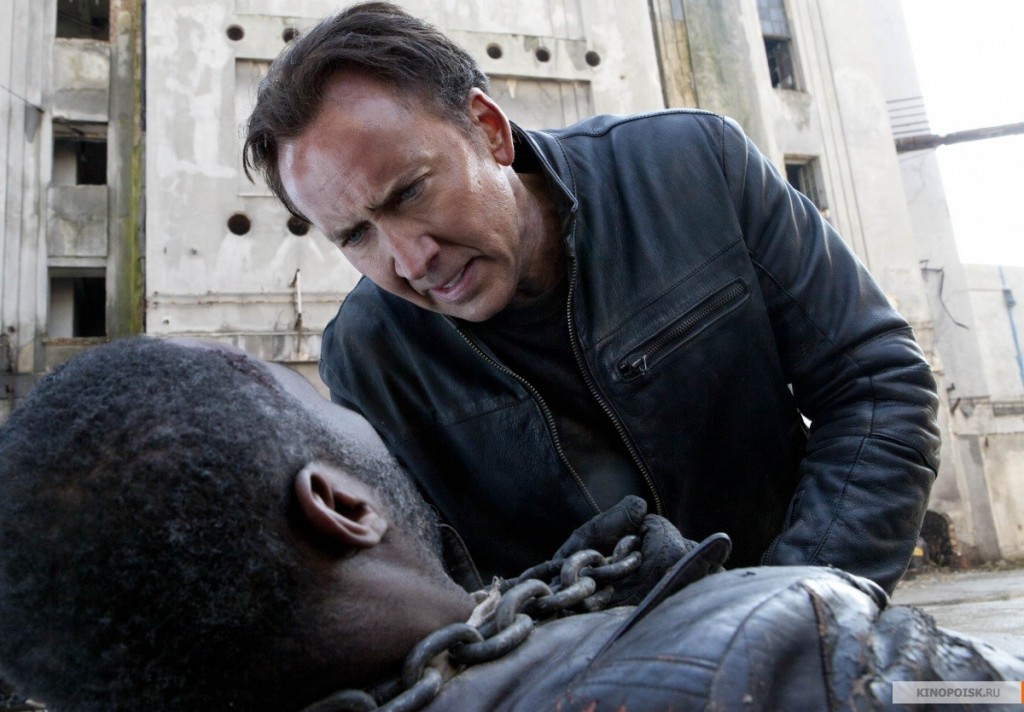 What did I tell you? This film IS SHIT!!!

In God’s good graces, there’s no way I can recommend this film on any level. It’s a base, terrible, shockingly shitty movie, the kind of thing you’d wipe your ass with were you to be able to turn it into bogroll. I hated this film, hated it with a passion, and I only write about it now in order to prevent any brave soul thinking “it can’t be that bad, can it?” from watching it – it f*cking is that bad, make no mistake. While I hate to sound mean, or even condescending, the torture of watching Nic Cage “act” his way through this thing should be enough to stop his career dead in its tracks. How he still has any currency in Hollywood is beyond my comprehension; come to think of it, how most of the people responsible for this dreck can sleep at night knowing fine folks went to see this film hoping for something decent and were suckered out of 10 bucks is equally unconscionable.

If you watch Ghost Rider: Spirit Of Vengeance after reading this review, you deserve all the pain coming your way. You’ve been warned.