Movie Review – World Is Not Enough, The

Director :  Michael Apted
Year Of Release :   1999
Principal Cast :  Pierce Brosnan, Sophie Marceau, Denise Richards, Robert Carlyle, Robbie Coltrane, Judi Dench, Colin Salmon, Desmond Llewellyn, John Cleese, Samantha Bond.
Approx Running Time :  128 Minutes
Synopsis:  Something about an oil pipeline, a wealthy heiress, a dying terrorist and some horribly glib sex-puns.
What we think : The rebooted Bond franchise began to show cracks in its impeccable facade, with some terrible puns, a sense of trying too hard and a somewhat belabored plot ruining what might have been a thoroughly enjoyable Bond romp – the addition of then-popular Denise Richards, and her inexplicably bouncy gait, merely topped off one of the least impressive Bond outings since Tim Dalton took over as the main star, back in the 80’s. The World Is Not Enough is too clever by half, too convoluted, and lacking in any real tension. Compared with both GoldenEye and Tomorrow Never Dies, this film floats on the surface like a turd that won’t flush. Compared to Die Another Day, it’s positively a masterpiece. Take from that what you will.

The world might not be enough, but this film is.

Check out the almighty theme song by Garbage:

Approaching The World Is Not Enough some six or seven years since last viewing it – on bog-standard DVD – I had a strange inkling that I’d find it lacking somewhat in credibility and entertainment value thanks largely to the intervening years being none-too-kind to this, the third Brosnan Bond film. Critical appraisal of The World Is Not Enough ranges from mild amusement to outright hatred, depending on how vested an interest you have in the franchise, although invariably it compares quite favorably with the dogshit that was Die Another Day. The fun and tight plotting of the two previous outings, GoldenEye and Tomorrow Never Dies, seemed to have deserted Bond in this episode, while the addition of Denise Richards, who at that stage had starred in films like Starship Troopers and Wild Things and was touted as “the next big thing”, until she entered the atmosphere of the creative black hole known as Charlie Sheen and vanished from the face of the Earth, left the franchise floundering for credibility amongst the better action films of the day. The World Is Not Enough isn’t so much a bad film as it is a film of limited appeal to even the most attuned Bond fans. And what do you expect when one of your characters is a singlet-wearing nuclear physicist by the name of Dr Christmas Jones?

Insert your own phallic joke, Bond.

World begins with a decent enough opening – Bond rescuing a large quantity of stolen money from an upstart banker in Switzerland, before nearly being killed for it by an unknown assailant. Returning to Britain, Bond inadvertently realizes the case containing the money is actually a bomb, which detonates, leaving Bond to pursue the female assailant down the Thames in a high-powered boat, all before the opening titles kick in. As far as opening sequences go, this one’s a ripper, as well as being the current record holder for the longest pre-credit sequence in the franchise’s 50 years. From there, however, the politics and subterfuge takes over, threatening to swamp the film in mediocre plotting and second-rate double-crossing and intrigue. The World Is Not Enough meanders – yes, meanders is the best word to describe the shenanigans of the opening hour – through plot contrivance after plot contrivance, and even considering this is Bond after all, it’s a fair leap to assume that a bunch of parachuting snow-mobile operators would know Bond and lead female Elektra King would be standing on the snowy mountainside overlooking an oil pipeline just when they arrive to kill them. There’s a distinct lack of logic to the action sequences, seemingly inserted into the film just to expand the running time, or perhaps to cover the lack of development Bond and Elektra’s characters endure throughout. 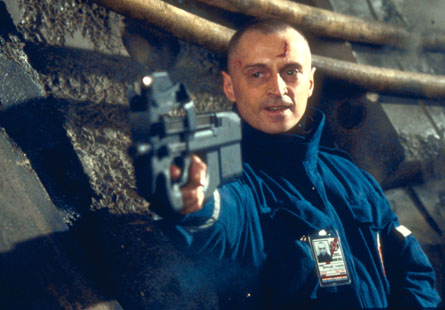 I fire my gun at you Bond!!

Michael Apted does a reasonable job presenting the major action set-pieces; in particular, the chase down a pipeline by Bond and Dr Jones to disarm a bomb is particularly effective, although latter sequences involving a nuclear submarine become tiresome and somewhat reminiscent of other submarine films like Hunt For Red October. There’s only so much you can do in a sub. Apted, whose work on large scale action films up until this film had been virtually nil, manages to eke out some entertainment in places, although with the problematic scripting and the miscasting of several actors in key roles, he’s hindered by production issues. The script seems more cartoonish than both GoldenEye and Tomorrow Never Dies, with Bond spouting glib one-liners in virtually every sequence – and I mean, reeling them off at least once in every two lines. Poor Brosnan must have hated what he’d signed up for by this point, with the horribly sexist and smarmy way the lines are written unable to be retrieved into classy showmanship by even Brosnan’s debonair attitude. This script is, frankly, inept for a major Hollywood production, and presents as a throwback to the worst of Roger Moore’s time as the star. Cringeworthy double entendres aside, the plotting and exposition in this film is a far cry from the cleverly reworked modern approach taken by previous installment scribes; here, a trio of writers toiled away for what must have been months to come up with pearlers like this, by “nuclear physicist” Christmas Jones: “The world’s greatest terrorist running around with six kilos of weapons-grade plutonium can’t be good. I gotta get it back, or someone’s gonna have my ass.” Yeah, because that’s how LA-raised nuclear physicists speak, right? 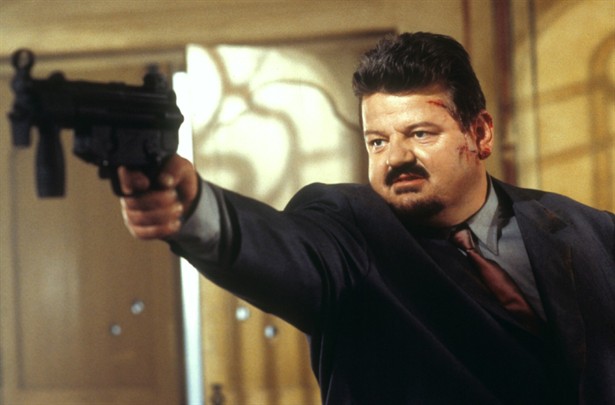 I’ll fire my gun at Bond too!

Speaking of Christmas Jones, I’m the first admit I admired what Denise Richards achieved as an actress, considering her lack of actual talent. Hired primarily off the back of Wild Things, Richards pouts, bounces and carves her way through this film with the subtlety of a spree-killer. Obliterating whatever credibility the franchise might have had left once Bond molested and bonked his MI6 nurse allowing him to return to active duty, Richards, as the incredibly monikered Christmas Jones has zero chemistry with Brosnan, and an innate inability to produce a performance that might be construed as… believable. And with all the Christmas jokes scattered through the film – especially a couple right in the final scene – you’d probably be right in thinking the writers gave her that stupid name just so they could make all those terrible puns. As far as leading ladies in Bond go, Christmas Jones is one of the worst.

The only reason I’m even in this film is because boys like my tits.

On the other side of the female ledger, French beauty Sophie Marceau is utterly wasted as Elektra King, the primary catalyst for the action in this movie. Marceau is nice to look at, and generally she’s a top class actress, but her role here is – regardless of the screen-time she’s afforded – minimal at best. Her motivations, revealed later in the film, are spurious and ill-defined, her dialogue is trite at best (seriously, she even utters the phrase “I could have given you the world”, which of course leads Bond to attenuate the films title somewhere into the script) and Marceau seems to mangle the garbage she’s forced to spout. All that into consideration, Marceau certainly comes up with the goods as far as eye candy goes, so that’s something working in this films favor. 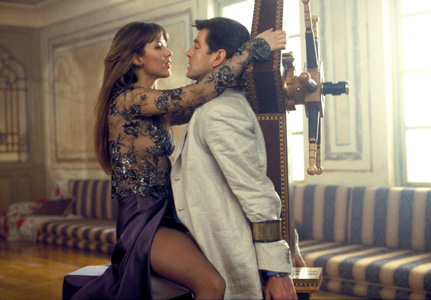 Then there’s poor Robert Carlyle, desperately trying to infuse his Renard character with some kind of menace – from his description by M and the MI6 agents in the opening half of the film, Renard is a figure to be feared thanks to the bullet lodged in his skull which is effectively turning him into a superman (don’t ask, I don’t understand it either, and my nurse-trained wife scoffed when she heard the evaluation of his injuries, indicating it was far from possible) but that fear is never vindicated even at the very end, when it should have been at its most palpable. Instead, Apted opts for a more traditional villain archetype, although at least Carlyle looks menacing. As a character, though, he’s underdeveloped and most definitely underwritten. 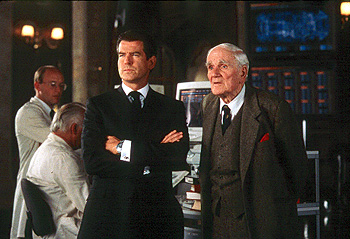 Don’t forget, 007, the new guy’s a famous British actor too – so you can give him as much shit as you want.

Mention must be made of the final appearance of Desmond Llewellyn as Q, who prior to this film had announced his intention to retire from the series – his replacement, R, played by John Cleese, is a terrific foil for Bond’s verbal sparring. Llywellyn’s final moments, where he provides Bond with two key lines (“Never let them see you bleed”, and “always have an escape plan”), are curiously eerie considering the actor was killed in a car accident just after the films release, in 1999. It’s a poignant moment indeed. Cleese would return in Die Another Day, before the part was recast in 2012 as part of the rebooting again of the franchise starring Daniel Craig, in Skyfall. 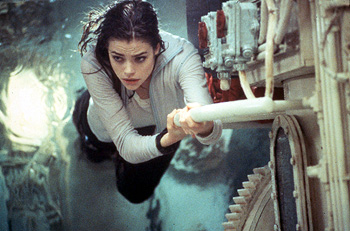 Whose stupid idea was a wet t-shirt competition in this movie?

The World Is Not Enough is still an entertaining film in some ways, although by this point the minor flaws in Tomorrow Never Dies had sprouted roots and were taking over the franchise here. They’d bloom fully in Die Another Day, leaving the Bond franchise desperate for yet another reboot to kick the moss off it. The World Is Not Enough has too many plot points, too much going on and too many character spoiling for screen-time – and two key villains dilutes the films potency even aside from the terrible scripting and aimless dithering. It’s easily not the worst of the franchise – I’d say a couple of Roger Moore’s efforts rank higher than this one – but fans of the franchise, and casual film fans also, must have spotted the cracks starting to appear here. The World Is Not Enough is flawed, frustrating and at times fatally unimpressive, but the glimmers of class amongst the shite in this ensure it has at least some merit in the annals of the Bond saga.