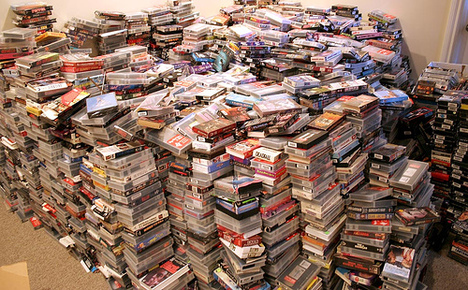 In my life, I’ve owned four copies of Stargate. Not the variety of television series, but the original Roland Emmerich film. The first, a widescreen VHS copy. The second, a poorly mastered Region 4 DVD, before upgrading from that to a nicer – albeit still flawed – Region 1 version. Now, flying through the US mail system, is my recent Amazon-purchased Blu-Ray edition, supposedly even better quality than any of the preceding DVD versions. In my life, I’ve owned three copies of Resident Evil – a pitiful R4 version on DVD, the R1 Superbit edition, and now the Blu-Ray. Multiple copies of Armageddon, The Rock, Harry Potter 1-4, Blade Runner, heck, even Lord Of The Rings; passion for owning films on DVD and Blu-Ray is an expensive hobby at the best of times. I’ve already covered the theme of cinema cost in a previous post here, but today I want to cover off on something I think film studios secretly use to bolster their bottom lines at the expense of film enthusiasts.

One of the most famous example of a Double Dip was the 2011 release of Transformers: Dark Of The Moon on Blu-Ray. Michael Bay wanted to get the film out onto HD media as soon as he could, so Paramount released a movie-only edition to the public. They did this with the understanding of their various media outlets that a more extras-laden edition would follow in due course, although were you a bit of an internet novice, you’d never be aware of that. Two Blu-Ray releases of the film, barely six months apart, capitalizing on the small market who will by the first version with the intent of upgrading to the second upon release. Some would work the cynical angle and say that this is a clever marketing ploy to dredge more money out of the audience, a rather subversive capitalist ideology which pits desire off against restraint. Personally, I skipped over the bare-bones release so I could enjoy the full blooded version, but I’d imagine there’s a few folks out there who didn’t, either because they couldn’t wait or they didn’t know. Those of you reading this will probably have at least a minimal knowledge of studio shenanigans like dual Blu-Ray dips, but the casual film watcher usually does not.

If you cast your mind back, this little strategy isn’t the first time a film’s been given a bare-bones release well before a full edition. James Cameron’s Avatar was given the same treatment. Fans were divided, amongst those who saw a corporate mentality to skim millions more from film fans and caved in to it, and those who saw it for what it was and waited for the inevitable full version. The question that really needs to be answered is this: was it truly necessary to have dual release strategy for these films? Was there a market push to have Transformers 3 released well before a fully laden extra-features disc, or was it truly a desire from the corporate pencil pushers to scrape up more cash.

The classic double dip is something which has plagued the home video market since the days of VHS tapes. Re-releasing movies in “new” or “remastered” variants has been something studios have done since home cinema consumers developed the ability to take money from their wallets. Bring on DVD, and all those VHS tapes suddenly needed upgrading. Now, Blu-Ray has the same pull. Sure, there’s usually a good reason to upgrade a copy of a film; enhanced picture and audio being the primary one, and the addition of extra features being a close second. This natural Double Dip requirement isn’t what I’m railing about here, however. What I hate, more than anything, is the scurrilous Double Dip. Usually, it’s an “anniversary” release of a film designed to cash in on a soon-to-be-released sequel or the death of a star or something otherwise important to the films’ history. The one where they throw in an extra 5 minute reunion interview as well as all the other extra features from a previous release, making buying this edition almost a “must own” to the completists out there. This is the kind of thing that sticks in my craw. I’m not a huge “bonus features” fan, because I usually only watch them once and that’s it. Obviously, releases like the Lord Of The Rings Extended Versions and the extraordinary documentary accompanying that are exceptions, they’re not the rule.

Less frustrating are the obvious “Directors Cut” re-releases. Directors like James Cameron and Peter Jackson are known for issuing multiple versions of their films, Aliens being perhaps the most well known example. When it was released theatrically, Aliens, James Cameron’s sequel to Ridley Scott’s classic Alien, was deemed too long by 20th Century Fox and forced Cameron to cut the film to a preferred length. Eventually, the home cinema industry gave Cameron the platform he needed to give the fans of the film the full version he’d envisioned originally. The Aliens Directors Cut remains the definitive example of a film actually improved by the inclusion of formerly excised material. Ridley Scott himself is no stranger to the Directors Cut – his 80’s classic Blade Runner has about a half dozen differing versions, if you believe the internet, most of which have ended up on DVD and Blu-Ray at some stage. The most recent Blu-Ray release from Warner Bros tried to ensure you’d never need to by another copy of that film – the ultimate edition included just about every variant of the film they had, and more extra features than you could poke a Replicant at. Scott’s more recent product has also had the same exposure – Kingdom Of Heaven came out to a dull thud in cinemas, and was improved in almost every way on it’s eventual Directors Cut DVD release. And from what I’ve seen online, the Blu-Ray version getting about is the Directors Cut only. Funny, that.

Buy cynicism amongst film and home media fans is rife with studio greed front and center. I’m sure people don’t mind paying for better versions of a film they love, as long as it’s worthwhile to do so. But the recent Transformers 3 debacle left me deeper in my cynical view of capitalist corporate greed, and no doubt this kind of thing will occur again and again as long as the money makes it a feasible option. Disney’s redoubtable option to lock their big earners away in a “vault” for the best part of a decade is equally as cynical a move, I think, and it’s a pet peeve of mine when studios will artificially influence the market using such devices. I know, it’s not against the law, and we’re suckers if we fall for it, but doesn’t it just piss you off?

At what point do we stop Double Dipping? How much money do we spend on buying the same film again and again, on different formats and in different “editions”, before we say enough? The obvious Double Dips -the ones designed as an unsubtle cash-grab – frustrate the hell out of me, and I often wonder where it’ll all stop. Hopefully, it’ll stop before the home cinema market isn’t completely undermined by a useless “anniversary edition” of Never Say Never.

Think we’ve got it wrong? Don’t mind forking out time and time again for the same movie? Wanna see a stop to it? Let fly in our comments section below!

6 thoughts on “I’m Angry About The Double Dip: Are Film Studios Ripping Us Off?”