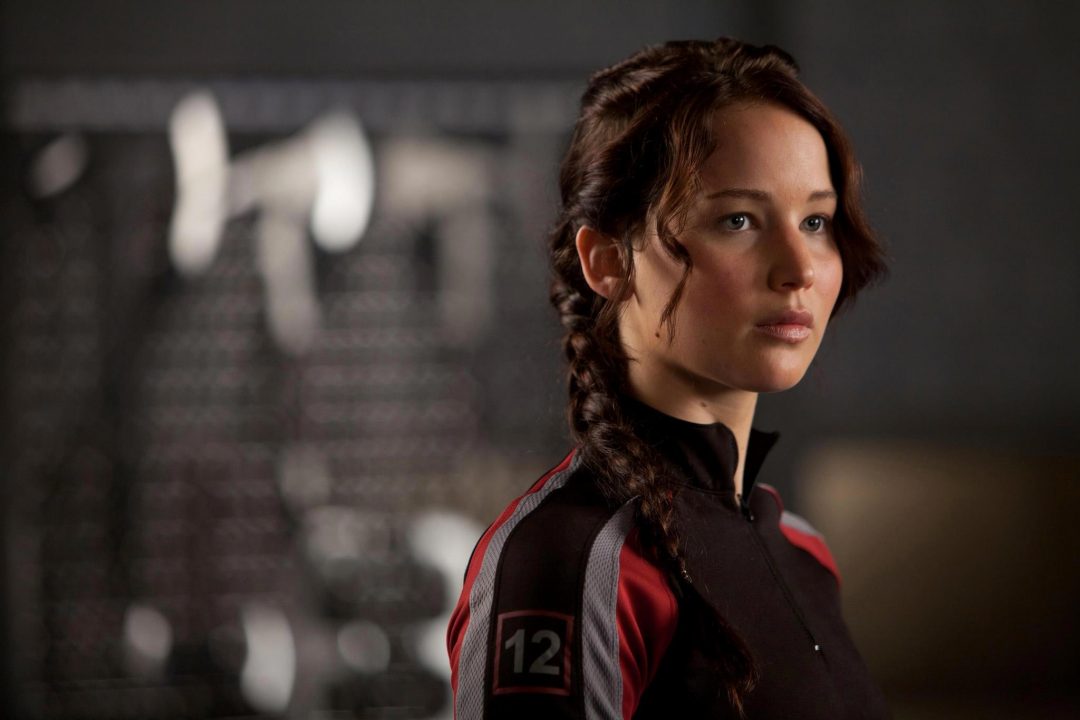 Director :  Gary Ross
Year Of Release :   2012
Principal Cast :  Jennifer Lawrence, Josh Hutcherson, Woody Harrelson, Elizabeth Banks, Donald Sutherland, Stanley Tucci, Lenny Kravitz, Wes Bentley, Liam Hemsworth, Amandla Stenberg, Tony Jones, Alexander Ludwig.
Approx Running Time :   145 Minutes
Synopsis:  In a dystopian future Earth, the post-revolutionary Government holds an annual competition for 24 young people to kill each other until only one is left as a way of giving hope to the populace. This competition is known as The Hunger Games.
What we think :   Handsomely mounted, well staged sci-fi adventure film delivers some thrills but ends up being an empty, melancholy waste of time. Characters and locations are ill-developed, the narrative thrust of state sanctioned murder is repugnant – especially considering there’s no respite or positive outcome – and the film’s inherent desolate nature do not make for comforting viewing. Jen Lawrence is solid as Katniss, and Hutcherson backs her up with a thin, waftish portrayal of Peeta, but the rest of the film lacks coherence for anyone, like myself, who has not read the books.

It’s an indisputable fact that The Hunger Games trilogy of novels, by author Suzanne Collins, are highly popular. Sales figures don’t lie. With the vacuum created by the conclusion of the Harry Potter franchise, and soon (thankfully) the Twilight Saga, Hollywood was always going to go looking for The Next Big Thing in literary circles with which to turn into a film series. Hollywood + Hunger Games = Massive Financial Windfall. Because I watch so many films and write/read so many blog articles, I rarely get time to read any actual books, therefore my knowledge of this franchise is limited at best, appallingly bad at worst. While everybody else was going bananas at the first trailer for The Hunger Games dropped online, I sat back and just went “meh”, mainly because it didn’t actually look all that interesting. Or perhaps I have franchise fatigue. In any case, I approached the beginning of yet another franchise based on a literary work with what I considered a reasonable amount of restraint, not because I’d been burnt by poor book-to-screen translations, but because I just didn’t know if I could handle getting “into” another series with as much enthusiasm once again.

Set in the future, in a post-apocalyptic North America, the nation of Panem is divided into twelve poor districts surrounding a vastly wealthy capitol. Each year, two kids aged between 12 and 18 from each district – a boy and a girl from each – are seconded to the capitol to participate in an enforced killing spree competition known as The Hunger Games – a gladiatorial contest for the wealthy elite, for which the victor is simply the last person left alive. Katniss (Jennifer Lawrence), who volunteers for the Games when her much younger sister is chosen from a ballot, is accompanied by a boy from her district, Peeta (Josh Hutcherson), and together they board the train with their mentor, a drunken former survivor in Haymitch (Woody Harrelson) to get ready for battle. She leaves behind not only her sister, but romantic suitor in Gale (Liam Hemsworth), who realises that he may never see Katniss again. With the odds heavily stacked against the 24 combatants, and alliances forming between them, Katniss and Peeta must eventually work together to survive the Games and return to their district to be reunited with their loved ones.

If, like me, you find the concept of having a bunch of kids running through a jungle murdering each other for sport as something you find reprehensible as entertainment, then feel free to stop reading this review. The Hunger Games is, for lack of a better word, nasty. There’s barely a redeeming factor in this film, save that it stars Jen Lawrence as Katniss, and she does a commendable job delivering a performance of some depth around a thin script and vapid, incomprehensible characters. The story itself is repugnant to me, the kind of blood-sport of the future being some sort of punishment of the poor by the wealthy for the revolution which led to the destruction of society – whoever thought having a bunch of kids running about getting slaughtered would make a great children’s book – and now a film – should probably check their moral compass for breakage. Some might argue it’s a little like an Hollywood version of Battle Royale (which tells pretty much the same type of story), but I would say it’s a lot less tongue-in-cheek and a lot more serious than anything to come out of Asia. I’m okay with gladiatorial sport, but when there’s kids involved, that’s a hell of a hurdle for me to jump to enjoy it.

If you can get past the obvious ethical issues of the murdering of children for entertainment, then you’ll probably like The Hunger Games. I didn’t, but you might. The film begins slowly, middles its way into second gear about an hour or so in, and concludes with several cool action pieces surrounded by plenty of Katniss and her bow-and-arrow routine. We’re introduced to Katniss and her sister, Primrose (the awesomely named Willow Shields) as they’re living in relative squalor of their mining district. We’re also given the slightest hint that Katniss is romantically involved with Gale, played with square-jawed epicness by Liam “I’m not Thor” Hemsworth. Then, Katniss and Peeta are whisked away to the Games, to training and the “adulation” of the wealthy masses for their “tribute” of death – they’re seen in the same light as the Roman gladiators were: heroes who died for the Roman cause, and they were held in high esteem by the masses even though they came from lower classes. The parallels are hardly subtle, to be honest.

The film’s script is equally light on depth – Katniss aside, the majority of the characters are barely developed on screen, allowing little viewer connection to their inevitable plight. The tributes from the other districts are given either minor development or none at all – they’re just cannon fodder for the murder to come – with the exception of a young girl named Rue, played by Amandla Stenberg, who befriends Katniss and aides her in her mission to kill everyone else. The population of the capitol, the wealthy elite, look like they’ve stepped straight off the set of The Fifth Element, with the gaudy colors and fascinatingly impractical costumes designed to look cool but not much else. Stanley Tucci hams it up well as a big-tooth television commentator who helms the broadcast of the Games to the world, while Wes Bentley looks as evil as you can with a beard carved from pubic hair on your face. Donald Sutherland is effortlessly wooden as some dude who’s in charge – I think he’s like the President or the King of Panem, but the film isn’t specific enough to be sure. Either that, or I lost interest when that information was imparted. The point is, I shouldn’t have to have read the books to understand who all these people are and what the hell is going on, but as the film wore on (and wore me down) I came to realize that perhaps that’s where my dislike of the story was going wrong.

The cast all do their damnedest to bring something to the film. It’s a shame they’re hamstrung by a script with so little to offer the viewer. Woody Harrelson looks bored to be in it, Elizabeth Banks is nearly unrecognizable as the creepily skittish Effie Trinket, and Alexander Ludwig (who could pass for Josh Hutcherson’s sibling) is treated terribly as the Game’s central villain, Cato.  Jennifer Lawrence is, easily, the star of the show, and she carries the film’s populist weight on her delicate shoulders with a relative ease. She certainly looks good with a bow and arrow, but the fact of the matter is there’s not enough back-story to her, or development of her throughout this story, to allow her to grow before the audience. While I can’t fault Lawrence for her performance, I can fault the script for not delivering us an action hero we really care about. I know as much about Katniss at the start of the film as I do at the end – and even then that’s not too much.

Director Gary Ross undoes any and all potential in this film by refusing to produce any steady wide-shots – instead, the film’s all Bourne Supermacy-styled throughout, with cripplingly vapid hand-held camerawork preventing the audience from figuring out what the hell is happening. I don’t mind it in small doses, but for God’s sake I wished I could see something that didn’t come with motion blur. The visual effects and digital trickery are all of a high standard, although how in the hell Tucci got that hair style remains a mystery to me. A complete lack of tension, either through the script or through any sense of peril, permeates the first half of the film, before Katniss is unleashed upon the Game’s arena. Once inside the arena, there’s a sense of Man Vs Wild about it all, although had Bear Grylls been shoved into this situation I doubt even drinking his own piss would have helped. Ross never dwells on the killing of each child combatant, largely thanks to his frantic whip-pans and uneven camerawork coupled with some off-screen sound effects, a creative choice which lessens the impact of seeing folk aged 13 or so being torn apart by older tributes…. yeah, this film’s “family friendly” alright. Visually, though, the film left a lot to be desired with a prevalence of incomprehensible action sequences and a plodding, graceless opening hour.

As far as epic, wide-screen franchise building goes, there’s little doubt that The Hunger Games ticks all the boxes for modern audiences. A central figure who’s able to rise above the challenges set before her, check. A three-way romantic entanglement, check. An oppressive society wealthy-class who think the sanctioned murder of kids is acceptable, check. Yep, the family friendly franchise is back. The Hunger Games is a dirge to get through, with little positive engagement for the audience or any other hopeful message to deliver: it’s dark, dangerous and, in this reviewers opinion, devoid of entertainment on multiple levels.