Director :   Glenn Ficarra & John Requa
Year Of Release :  2011
Principal Cast :  Steve Carrell, Julianne Moore, Ryan Gosling, Emma Stone, Marisa Tomei, Analeigh Tipton, Jonah Bobo, Kevin Bacon.
Approx Running Time :  118 Minutes
Synopsis:   When his wife of 30-odd years asks him for a divorce, Cal Weaver’s life slips into disarray. He meets a young tomcat at a bar, learns how to pick up and sleep with women, in an effort to try getting over his wife’s infidelity. His young son, meanwhile, is infatuated with their babysitter, a babysitter who is actually infatuated with Cal – unbeknownst to him.
What we think :  This film is about love – but not in that Moulin Rouge kinda way. Intelligent, cleverly written, well performed by the entire cast, Crazy Stupid Love is a terrific film on all fronts, even if it does run a little long. You could do worse than giving this one a whirl.

Steve Carrell, much like fellow comic Jim Carrey did about a decade ago, is rapidly making a name for himself by branching out from his comfort zone and into more dramatic roles. And, similarly to Carrey, Carrell is delivering some mighty fine work – Crazy Stupid Love is by far one of his most accessible roles, even though long-time fans may find the lack of outright comedy a little annoying. Carrell plays Cal, a forty-something family man whose wife, Emily (Julianne Moore) suddenly asks him for a divorce; she slept with a co-worker and wants to move on. Shocked, Cal takes to hitting a bar, where he meets young player Jonah (Ryan Gosling), who decides to teach Cal how to pick up random women and sleep with them. Cal’s young son Robbie (Jonah Bobo), meanwhile, has developed an enormous crush on the Weaver’s babysitter Jessica (Analeigh Tipton), while Jessica has embraced her rapidly developing crush on Cal himself. A young law graduate, Hannah, is also struggling with relationship issues, when she comes to realize that her long-term partner, a fellow lawyer, has no intention of proposing marriage even after all this time. Yeah, there’s a lot of angst in this film, but not in the kind of way that makes you roll your eyes. Carrell delivers a performance well above my expectations in this, as he carries the dramatic weight of such a heavy, emotion-charged film with consummate ease. While many of the story beats may be unfamiliar to those of you who are yet to marry, don’t let that put you off giving this film a shot.

The cast in this beast are excellent – Carrell, Moore, Gosling, Stone, and newcomers Jonah Bobo and Analeigh Tipton all deliver first rate portrayals of character beset by love, anger and emotional distance. Gosling sizzles once more (my wife was drooling watching him during this, which reminds me I must get around to showing her Drive at some stage) as the lothario tutor of Carrell’s newly single Cal, while Moore goes above and beyond to portray the cheating wife as more than a cliche (which, I might add, is also a credit to the writing of her character). Emma Stone seems somewhat miscast in the firsthalf of this film, as if she’s playing a role she’s not comfortable in, but by the time the crucial third act starts, the reasoning for casting her quickly becomes clear. Jonah Bobo, as Cal’s teenage son Robbie, channels the very essence of adolescent puberty-ridden emotion, and while he seems a lot like a yuounger Patrick Fugit, his portrayal of the confused, strikingly confident (and then, not) young boy is superb. Analeigh Tipton is one to watch out for, with her Lolita-esque portrayal of an equally confused and confident Jessica being one of the highlights of the movie. The direction, by Glenn Ficarra and John Requa, is hardly flashy, but delivers moments of pure emotion that serve to heighten the story instead of create false feelings in the audience. It’s no firework, but it delivers plenty of spark. My only real criticizm would be the somewhat lengthy middle section of the film, which tends to drag things out where they could be a lot shorter to get to. Crazy Stupid Love is a film about falling out of love, finding love, and discovering love where you never thought you would. It’s a terrific film, filled with memorable moments of skin-crawling awkwardness, that will move you and make you think.

What others are saying about Crazy Stupid Love:

Stevee at Cinematic Paradox enjoyed it: “If there is something that I didn’t like about Crazy, Stupid, Love, it would have to be that the film’s tone was pretty uneven. Other than that, I found this movie pretty darn enjoyable…it would be the perfect date movie, if I had a date. “

Rory over at Above The Line checked out the BluRay: “Comedy of errors, dysfunctional family drama for laughs, Crazy, Stupid, Love endears if only to be close to home funny with characters you know or knew, mistakes you’ve made or are on your way to making.” 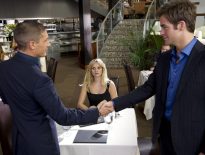 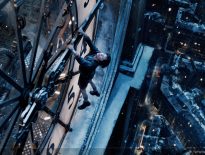