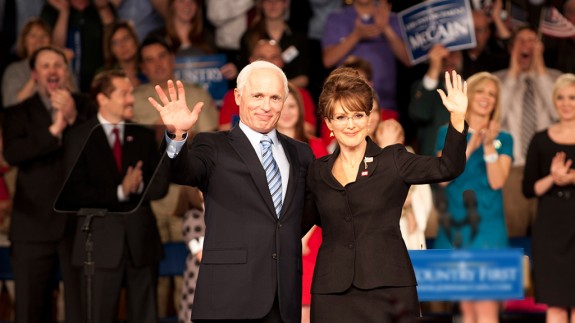 Director :  Jay Roach
Year Of Release :   2012
Principal Cast :  Julianne Moore, Ed Harris, Woody Harrelson, Peter MacNicol, Ron Livingston, Sarah Paulson, Tiffany Thornton, Melissa Farman,
Approx Running Time :   2 Hours
Synopsis:  The behind the scenes story of John McCain’s 2008 Presidential campaign as told through the eyes of Vice Presidential candidate Sarah Palin and Campaign Director Steve Schmidt, highlighting key moments in the race for the White House between McCain and Barack Obama.
What we think :  Absorbing, confronting political intrigue can’t make up for the fact that there’s almost no way of making this film exciting – we know the eventual outcome – and yet there’s definitely a sense of urgency about proceedings. Roach handles the ensemble cast well, Julianne Moore morphs convincingly into Alaskan Governor Palin, and Harris delivers a walloping portrayal of former US Captain in the Navy McCain; Game Change might be intelligently filmed, but what is most frightening is just how much of this might be, or might not be, entirely true.

I’m no expert in US politics; I stand here, an Aussie lad with little experience in the governmental structure of the United States outside of what I have seen in movies (does watching Michael Douglas’s portrayal of the American President count as experience?) and even then, perhaps many late night news grabs to base any opinions on. The relatively recent past of the 2008 Presidential Campaign, which, to an outsider, seemed more like a circus or Vegas show than any kind of political event, was fought between two candidates – eventual winner Barack Obama for the Democrats, and then-Senator John McCain for the Republicans; it seemed to the outside world that the campaign dragged on for an eternity, encompassing each of the states making up the USA and wasting millions upon millions of dollars for the sake of a job paying only $400,000. The most delicious aspect of the ’08 campaign seemed to be the inclusion of out-of-nowhere Alaskan Governor Sarah Palin on the ticket of McCain, as his running mate; her outspoken views and controversial character seemed more like a practical joke on the world than any legitimate attempt to win an election. Although the US election process is far and away one of the most convoluted processes ever devised by human beings, even to the point where voting isn’t even compulsory (in my opinion, the UN should enforce the mandatory voting system on the US considering the sway their president has on the rest of the world – I don’t get to vote for him or her, but his decisions effect me anyway, right?) and in the end it’s a bunch of dudes in a university somewhere who decide in the end, watching Game Change from the viewpoint of an outsider is, I imagine, somewhat different than for those of you more familiar with the process and politicking than I.

Steve Schmidt (Woody Harrelson) is called upon by US Senator John McCain (Ed Harris) to handle his run for the White House in the 2008 campaign for the Presidency. When no suitable running mate (for the position of Vice President) is good enough to help the Republicans win over superstar Barack Obama, McCain’s advisors decide to go with an outside choice for the ticket: Alaskan Governor Sarah Palin (Julianne Moore), whose personality and attitudes might help the party gain traction on Obama’s runaway success. After a (very) brief vetting process, Palin is introduced to the world, before the startling realization that she’s grossly unprepared for the office of Vice President starts to hit home to the campaign faithful. Palin’s extremely limited knowledge of world affairs, and her inability to memorize much of anything a leader in her position would be expected to handle, has her campaign staffers tearing their hair out trying to stop her ruining McCain’s campaign. However, Palin’s popularity with the populace is growing, and this threatens to overwhelm the carefully constructed campaign thanks to the Alaskan mother’s headstrong belief in her own press. While she’s targeted by comedians for her outlandish and stupefyingly ignorant interviews and viewpoints, McCain’s popularity begins to wane as the Obama campaign kicks into high gear.

I don’t know how much of this film is fact, and how much is fiction. I would like to say, however, that if even a tiny part of this is several miles from even a snifter of the truth, then I’m ever so glad the other guy won. Julianne Moore is exceptional as Palin, her accent and mannerisms so believable (at least to me) and natural I actually lost sight of Moore anywhere in her. Ed Harris swaggers through this thing as McCain, a polar opposite personality to Palin (with the exception that they both love their country) and with a fairly straight-talkin’ mouth. Looking at a picture of both Palin and McCain, and then at Moore and Harris in their roles portraying those people, it’s an uncanny resemblance to both for sure. Woody Harrelson, who is quickly becoming my favorite established actor in recent years, does a superb job in the role of Schmidt, a man desperately trying to plug the leaks once it’s realized that Palin’s an idiot, politically speaking. Additional cast-members like Peter MacNicol (in a rare straight role) and Ron Livingston add weight to the film, as does Sarah Paulson as Palin’s media manager, surrounding Moore and Harris and giving their performances strength to draw on. Make no mistake: these people aren’t doing parodies, or imitations such that you’d see on Saturday Night Live (love the in-film use of Palin go-to imitator Tina Fey… brave choice not to cast her in the role, I guess, but Moore does a better job); instead, Moore and Harris truly do morph into their respective roles, losing themselves in the characters they’re playing so completely you are convinced they’re the real thing.

Casting aside, the story itself is where much of the controversy this film had coming lies. Depending on what you believe on the internet, this film could either be a pack of lies or pretty damn accurate; it’s hard to judge from over here in Australia, but the result, be it fabrication or truth, is remarkable. The scale of the political destruction Palin wreaks on the campaign – threatening to do her own thing, going against advice, not preparing for interviews, blaming others for her decisions, and having no clue about life outside the USA – dawns early as the campaign crew try desperately to get Palin ready for her national appearances. To me, Palin’s portrayed as a driven, morally upright cretin. She knows what she wants, but has blinders on to the rest of the world outside Alaska, and comes unstuck early and hard. Her wins, small as they are in the grand scheme of things, are always undermined by the petty ambitions she harbors once her own popularity starts to overshadow her running mate. The script seems to only scratch the surface of Palin as a person; to often, the film deviates to some other sidebar plot, or McCain umming and ahhing about his political choices. The films 2 hour run-time doesn’t allow us to generate any real emotion towards either of the lead characters – Palin is portrayed as motherly and patriotic at first, but by the end is a complete bitch, while McCain feels driven and motivated initially, before he just gives it all up when he sees the writing on the wall. While the screenplay does try and get us to feel some kind of sympathy for Palin’s situation, a mother of 5 thrust into the national – nay, the world spotlight, there’s not enough screen-time devoted to us understanding her motivations or central character flaws. Her flaws just feel like generic tropes of human failings: she gets a big head and thinks she can win the campaign off her own back, blames all and sundry for her own personal failures, and generally goes against the Establishment, something we know will never let her win. It feels thinly developed, as if we’re expected to already know a lot about what’s going on (and who can blame the filmmakers, because this is an inherently US-centric story, and probably won’t make much sense to anybody outside of the USA anyway) but it’s a cruel portrayal of a woman badly treated by the US political system.

There are some excellent moments in this film, however. The script does deliver some gold, most of which comes as Schmidt and the headstrong Palin square off against each other. Palin, refusing to give in to her demand to a concession speech once Obama wins (something a vice presidential candidate has never done), tries to go underneath, around and behind Schmidt’s orders. Harrelson delivers the film’s requisite “hell yeah” moment with exquisite delight, bringing Palin back to Earth with a thud. There’s a moment where Palin screams down the phone to Paulson’s Nicole Wallace, her speech writer, that causes some in the party to wonder if Palin is actually “mentally unbalanced”, and this in particular drew a laugh from me. The whole show of the campaign, the pomposity of the “entertainment” of US politics, is jaw-dropping in its arrogance and hubris; it’s this that drew the most ire from my wife and I while we watched. The integration of the actors into the real-world events portrayed, such as Palins debate with Obama’s running mate Joe Biden (not, as Palin refers to him, “O’Biden”), as well as the use of actual television coverage of the campaign, lends weight to the film, although it does tend to smother the movie with reality; this is, after all, a fictionalized account of real events, and there’s only so much “Forrest Gump” effect we can handle.

Overall, Game Change offered me little other than a glimpse into backstage US political maneuvering and two powerhouse acting performances. Moore and Harris deserve recognition for inhabiting their roles so completely it’s astonishing, even if much of what they do seems a little less reality than fantasy. That being said, if even half of this film is true, then the world was only a hairs breadth from having Sarah Palin, who famously said she could see Russia from her Alaskan home (kind of, anyways!) as the second most powerful person on the planet. I would recommend it to anyone looking for a well acted, well intentioned screenplay and some insightful personal growth from the three major players in this story; as a casual viewer its potency is lost on me, yet as a citizen of the world, this actually frightened the hell out of me.