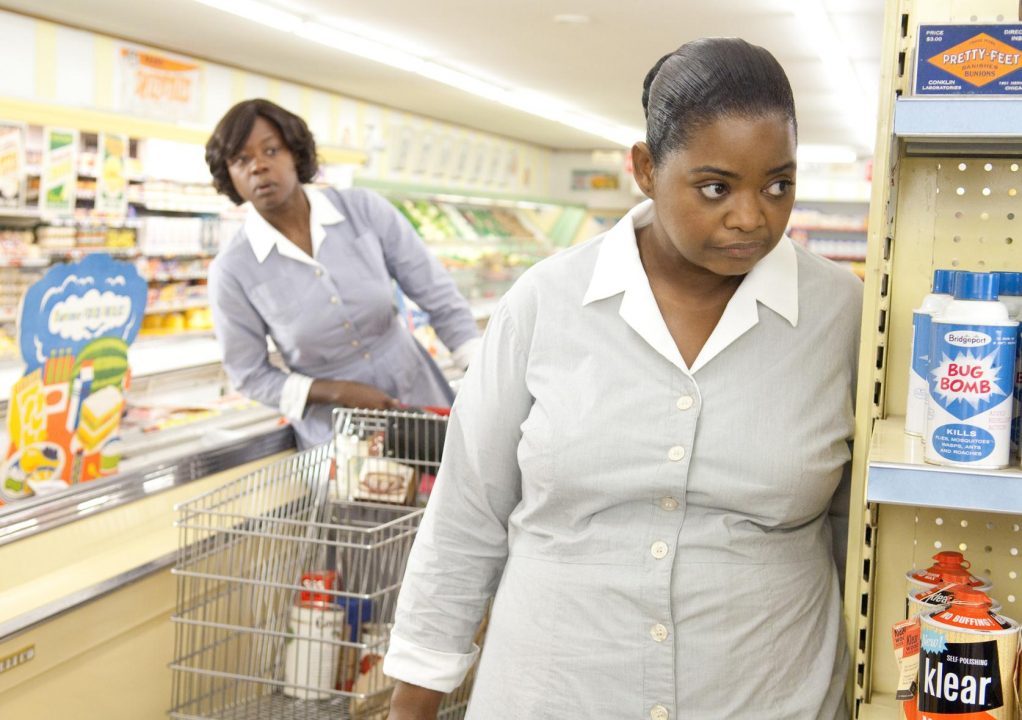 At the end of The Help, a film about prejudice and racism in the Deep South of the US during the 60’s, my wife was bawling her eyes out. Not because the film is in any way so terrible as to elicit tears of hatred towards the final product, but because the story itself is so moving, and the final scenes so heartbreaking, that if I give no other recommendation for which you’ll sit and watch this movie, then you are beyond help. Normally, as a viewer, films with themes like The Help both anger and frustrate me, and this film was no different. The injustices of the time and place this film is set – 1960’s Mississippi – and the people involved, is so horrendous to us now that it’s almost impossible to comprehend just how vile society became to our fellow humans. The Help is based on a book – a very successful book – by Kathryn Stockett and has been transformed into a film by Stockett’s long-time childhood friend Tate Taylor, whose last film was the relatively low-budget Pretty Ugly People. Stockett’s novel spent a deal of time as the number 1 book on the New York Times Bestseller list, so to see the film among this years Oscar nominees for Best Picture would have to be reward enough for Taylor and the cast; a film tackling the issues spruiked in The Help could have resulted in a film with a different flavoring, yet the end result seems more a love-letter to the time and the people than any kind of indictment.

“Skeeter” Phelan (Emma Stone) has just graduated from the University of Mississippi, and returns home to Jackson to find her family’s beloved maid Constantine (Cicely Tyson) has left. After finding her old friends have all become married and are in the process of having children, Skeeter finds work as a self-help columnist for the local newspaper, although her true calling is to write a book. Searching for a subject, she decides to secretly write about the life of the local maids – all black women working for less than minimum wage – from their point of view, in order to provoke a reaction from the white community. In 60’s Mississippi, to provoke civil unrest in such a way was an offense punishable by imprisonment. Two local maids, Aibileen (Viola Davis) and Minny (Octavia Spencer) are initially reluctant to give their stories to Skeeter, although after a series of racially insensitive events they soon decide to make a change in their community. One of Skeeter’s former friends, Hilly (Bryce Dallas Howard) is the leader of her social circle, and uses her overbearing white-trash personality to bully those around her into doing what she wants, including ostracizing another young wife, Celia (Jessica Chastain) because Celia’s new husband used to be Hilly’s old boyfriend. When Minny commits a major offense to Hilly (and I won’t spoil the surprise, but it’s awesome!) things go from bad to worse, as the secret attempt to write a book from the Negro perspective starts to gain momentum and popularity.

I don’t profess to be an expert on 60’s US race relations, nor am I familiar with racism in my daily life in any respect, so I approach my review of this film with a fairly unbiased opinion on the subject matter. Of course, I’m familiar with racism in general, and it goes without saying that the majority of the 20th century saw a great deal of change in the treatment of minority groups within all areas of Western society – be it African Americans, American Indians, or our own Australian Aborigines. The hotbed of race relations in America’s Deep South is an issue I think people still struggle with to this day, and it’s a well known fact that segments of society in that area are still living the ideal that black Americans are a lesser class of people – this film doesn’t try and modify your thinking to this, nor does it attempt to be controversial with the subject matter in the kind of way you’d expect; no, Tate Taylor’s picture-postcard film seems to embrace the time and people, portraying them as people instead of caricatures of the era. Bryce Dallas Howard is as close to a traditional villain as this film has, as Hilly, the racist leader of the pack who belittles and emotionally abuses all those – black or white – she sees as lower standing than herself. Hilly, as a character, is portrayed as vile and abhorrent, the personification of all that is bad about racism, and yet at the end of it all, her fall from grace (and she does fall) feels more like pity than outright fist-pumping villainy. Emma Stone, an actress I’m gradually coming around to in her serious roles (after this and her part in Crazy, Stupid, Love.) is quite good as Skeeter, and imbues her intellectual writer character with enough street-smarts not to come off as condescending or self-serving – which would have been a fatal flaw for the film. Skeeter’s cancer-ridden mother, Charlotte, is played to perfection by Alison Janney, and the two actresses bounce emotions off each other exceptionally well.

The main story of this film, however, doesn’t belong to Skeeter or her mother – heck, it doesn’t even belong to Howard’s odious Hilly. No, The Help reaches heights of greatness thanks to the performances of two people: Octavia Spencer and Viola Davis. Portraying two housemaids, Spencer and Davis are the heart and soul of this film, and without their extraordinary performances, this film would be a blip on the radar to disappear faster than it arrived. Davis is the particular standout for me, as Aibileen, the downtrodden-yet-pure-of-soul woman working to raise one white woman’s child, while still mourning the recent loss of her own only child. As Aibileen, Davis channels her very soul into the role, giving a heartbreaking performance that is both moving and destroying. Key among the factors of her character is her relationship with the young girl she’s raising – since the girls mother, Elizabeth Leefolt (Ahna O’Reilly) is more interested in being seen to be a parent than actually being a mother, it’s left to Aibileen to instill values and a sense of self worth into the youngster. The young girl, played by twins Emma and Eleanor Henry, sees Aibileen as her “true mother”, to quote from the film, which is truly heartbreaking to see. Minny, played by Olivia Spencer, is a sharp-of-tongue and somewhat bitter friend of Aibileens, beaten by an abusive husband, and one-time maid to Hilly, who ends up working for social outcast Celia. Spencer is terrific in the part, delivering some wonderful dialogue and sparkling off the screen; her friendship with Aibileen, as well as a burgeoning motherly role towards Celia, are twin plot arcs that are just beautiful to watch. Both women are superb their roles, and equally deserving of the praise heaped upon them.

On the other hand, the Oscar nominated performance by Jessica Chastain, as Celia, left me cold. Don’t get me wrong, Chastain is great in the ditzy, scattershot part of a desperate-to-get-pregnant wife of a wealthy landowner, but in this instance, I don’t think the part called for an Oscar nod. Had I been forced to choose a third acting nomination for this film, I’d have slid my pen across to the name of Bryce Dallas Howard, who delivers one of her best roles yet as Hilly. That being said, all the performances here are excellent, although, in a weird twist, it’s the male roles I found hardest to watch. Mike Vogel, as Celia’s husband, and Chris Lowell, playing Skeeter’s boyfriend Stuart, are the two biggest male roles in the film, and they’re barely in it. Neither actor is called upon to deliver an extraordinary performance: in fact, I found both Vogel and Lowell to be quite wooden in what little delivery they had. The Help has virtually no male roles whatsoever, with the narrative cleverly keeping us focused on the women of the story: one particular scene, in which Minny’s husband returns home to give her a beating, is almost entirely done off-camera, with Aibileen listening in over the phone. The men in this story appear to be of little consequence, and although I could have found myself disappointed, I figured that it wasn’t the intention of the original story to showcase both sexes in this narrative, but purely to discover what the women of the time thought. Fair enough, I reckon.

The Help strikes me as a kind of low-fi Forrest Gump-styled narrative poem, with an almost whimsical feel to it all, as if the events described belong inside a fairy story at times. The occasional twinges of truth and bitter reality seem framed within the motif of a heightened history, a kind of skewed-perspective of memory. This is a film to be savored, the kind of film you’d liken to a Shawshank Redemption or Dances With Wolves: it’s moving, it’s grounded in reality and yet seems almost a fantasy, lit with the subtle hue and glow of that bygone era we’ve seen so often. This isn’t fast-food cinema. It’s not junk film-making to be watched and dispatched with alacrity to the bargain bin of cultural relics. The Help is a moving, often delightful, always amazing film experience. Whatever you do, don’t miss it.

What others are saying about The Help:

Rory at Above The Line was struck by how good the film was: “You might not escape the troubles of your here and now in this film, your everyday, but through this film you have an opportunity for inward journeys where greater things happen all the time and we hope one day to have taken similar steps on our own.”

Aiden at Cut The Crap thought it was great: “An adaptation that would make any author proud.”

Will over at Silver Emulsions had reservations: “Turns out The Help is a pretty good mainstream movie, but one that still bothers me on a number of levels. It’s much too happy and seen through rose-colored glasses for me to fully embrace, but for what it is (a female-driven mainstream film), it’s serviceable.”

On the other side of the coin, Tyler over at Southern Vision thought it was terrible: “The Help is the kind of movie that I don’t hate, but I pity. It is weakly written, not exceptionally directed and tells a story that is not particularly enjoyable or satisfactory. “

Actually, so did Brian at The Movie Brothers: “If ever there was a major motion picture that felt like a Hallmark Hall of Fame movie, this is it. “

The Focused Filmographer thought The Help was great: “With the exception of a couple of misplaced or unnecessary portions ***(i.e. a seemingly forced in love interest for Emma Stone, etc) the movie succeeds in accomplishing all it set out to do. “

Stevee over at Cinematic Paradox also enjoyed it: “I thoroughly enjoyed The Help, despite the fact that I knew what was going to happen. It was hilarious and heartfelt, and quite brisk even though it had a slightly long running time.”

Craig over at Craig’s Cinematic Critique had these views: “This delightful story will no doubt be one of the feelgood films of the year with a flawless ensemble and a crisp portrayal of the setting which shows a troubled time that brings out good (and bad) from some of its characters.”