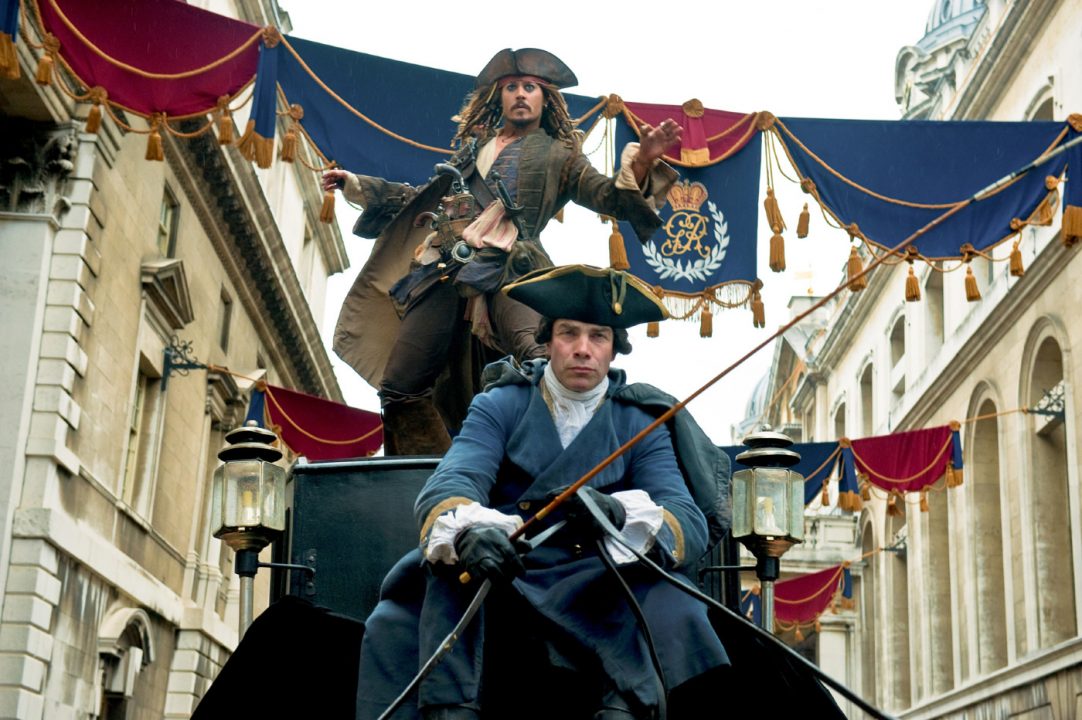 Director :   Rob Marshall
Year Of Release :  2011
Principal Cast :  Johnny Depp, Penelope Cruz, Ian McShane, Geoffrey Rush, Kevin R McNally, Sam Claflin, Astrid Berges-Frisbey, Gemma Ward, Keith Richards, Richard Griffiths, Judi Dench, Stephen Graham, Oscar Jaenada.
Approx Running Time : 136 Minutes
Synopsis:  Captain Jack faces off against the dual threat of notorious pirate Blackbeard, and the now-conscripted buccaneer, Barbossa, on a quest to locate the fabled Fountain Of Youth.
What we think :  What on earth were people on about? This isn’t such a bad film! Sure, it’s missing many of the elements the original Pirates trilogy had – Orlando Bloom and Keira Knightley in particular – but the film is a genuinely entertaining sea-borne romp. Rob Marshall doesn’t quite come to grips with the scale of the production, and many of the subplots don’t quite work as well as they could, but its a serviceable adventure comedy in keeping with Disney’s theme park ride. Much like the other films, On Stranger Tides seems a tad bloated with production value, almost as if they couldn’t find enough places to spend the budget they had, so Marshall seems to have thrown everything bar the kitchen sink into this film, and  you get the sense that not everybody seems to be having as much fun as they did before. Geoffrey Rush looks pained to be in this, but the wily Captain Jack, once more essayed by Johnny Depp, along with newcomer Penelope Cruz and Ian McShane’s snarling Blackbeard, more than make up for any of the films shortcomings. Terrific fun.

The original Pirates of The Caribbean films, The Curse Of The Black Pearl, Dead Man’s Chest, and At World’s End, are a confounding trilogy of pirate adventure – the first film was a truly terrific example of high-seas action and adventure, with Johnny Depp hysterically funny as the (now iconic) Captain Jack Sparrow, leading a fantastic cast across the oceans on a magnificent quest for the lost Pieces Of Eight. The second film, Dead Man’s Chest, was critically drubbed, but I still found it great fun to watch, and it probably remains my favorite of the first three films by a wide margin – the third, the sluggish and desperately convoluted World’s End, was a troublesome event film missing much of the laughs and brazen fun the first two had. So we come to film four, the Rob Marshall-directed On Stranger Tides, which sees Johnny Depp once more step back into the wobbly shoes and dreadlocked hairstyle of Jack Sparrow. Is it an improvement over World’s End and a good time to be had with a pirate patch? Or is it the wasted opportunity so many critics labelled it as upon release?

After rescuing long-time shipmate Gibbs (Kevin R McNally) from the hangman’s noose, Jack Sparrow (Johnny Depp) meets up with a former flame in the exotic Angelica (Penelope Cruz) to hunt down the location, and retrieve a sample of, the Fountain of Youth. Angelica, it seems, is the long lost daughter of infamous pirate Edward Teach (Ian McShane), otherwise known to all by his alias, Blackbeard. Blackbeard will stop at nothing to reach the Fountain before his destiny comes to pass – apparently, a fortune teller has said that he’s to be killed by a one-legged man, and so he needs the elixir of life to thwart death’s icy grip. The one legged man, the former Captain Barbossa (Geoffrey Rush) is under the employ of the King’s Navy, and he too has been charged with hunting down the location to the Fountain – if only to beat the Spanish to the goal. Before they reach the Fountain, however, they need to retrieve two items: one, a tear from a mermaid, and the second, a pair of goblets which will hold the precious elixir. Obtaining the goblets seems simple enough, however it’s the mermaid capture which causes the most havoc. After the ship’s captive missionary (Sam Claflin) accidentally catches a mermaid ( Astrid Berges-Frisbey) after a particularly brutal struggle, and Barbossa and Sparrow sneak onto a shipwrecked galleon to steal the goblets (which aren’t there – the Spanish arrived first and grabbed them earlier – they arrive at the Fountain of Youth where the future is intended to be rewritten.

There’s one thing you can’t say about the Pirate’s films, and that’s that they’re low budget. Like its predecessors, On Stranger Tides reeks of bloated excess in both production design and story, and it’s easy to see where the $200m budget might have gone. This film looks enormous, with ships and battles and massive sets all giving it that truly epic adventure flavor. Whether this works for or against the film probably depends on your point of view, I’d say, but personally, I really thought Tides had that feel of “no expense spared”, and it enhanced the on-screen antics no end. The cast were great in this too, even though many familiar faces might have been missing, and the addition of Penelope Cruz as a female foil for Jack worked really well. Cruz and Depp seemed to have a nice chemistry together, an easy rhythm they brought to their respective roles made for a fun time watching them. McNally’s Gibbs gets a slightly beefier role, as does Geoffrey Rush’s Barbossa. Rush delivers the best Barbossa job yet, with a slightly anemic, dysfunctional look about him that is actually pretty funny. Ian McShane chews the scenery splendidly as Blackbeard, tearing through the script with snarling ferocity and delivering a performance as the Bad Guy to perfection. Blackbeard isn’t a sympathetic character in the vein of Bill Nighy’s Davy Jones, and I think Blackbeard’s motivations through the film felt a little forced, but the sheer joy of watching all these people get about in fabulous costumes and makeup more than made up for it. This isn’t high art, it’s entertainment, and I thought it worked well as such.

Now, before you kick my ass for actually enjoying this film (which I did) let me explain that anybody watching this also has to deal with a number of problems that plague it. First, the dialogue: often, it’s expositional to the point of tedium, and at times I just wanted to shout at the screen to “get on with it”. The screenplay does tend to feel like a hodge-podge of ideas all wrapped up in brand awareness glory, with Terry Rossio and Ted Elliot trying to wring every breathless action sequence and fight scene they could possibly get out of it, and the cohesion of the plot tends to drift away when the focus is lost on the characters. There’s a plethora of extraneous scenes which could be cut out completely to save time (a scene with Richard Griffiths as the English King, where he instructs Captain Jack to locate the Fountain for him, is way too long and unnecessary), and the film becomes bogged down with a lengthy Mermaid Capture sequence about midway through, but this is swings and roundabouts, people. A sidebar plot with Sam Clafin’s missionary (yes, even a “missionary position” joke is made – groan) falling for the captured Mermaid seems a little out of place in amongst the “aargghs” and the “avasts”, and Calfin’s character isn’t exactly the replacement for Orlando Bloom the filmmakers intended; there’s also a great deal of discussion about faith, and whether Blackbeard is capable of being “saved” by the word of God, but this is an element of the plot that feels halfhearted at best.

All that aside, I thought On Stranger Tides was decent fun, even if it felt like a theme park ride while watching it. It’s got its fair share of ups and downs, this film, but it’s still eminently enjoyable for the spectacle and adventure it provides. Rob Marshall’s direction is solid enough, I think, and he handles the large scale of the film with a detached ease. Chases, fights, underwater and above, creatures and visual effects – Tides is a typically grandiose film and it requires a sense of occasion from the director to handle it: others may beg to differ but I thought he did a good job. Sure, he won’t win an Oscar for it, but as far as being able to tell the story well, generate some excitement and give some thrills, Marshall’s work here is solid. Hans Zimmer returns to give the now familiar score yet another working over, providing a sensationally powerful musical accompaniment to the on-screen action. He’s taken Klaus Badelt’s original themes and tweaked them ever so slightly, and often, not quite ever so subtly.

The Pirates franchise isn’t going to go down as one of the best franchises in Hollywood history any time soon, although the same can’t be said for Captain Jack Sparrow, as portrayed by Depp. Depp absolutely steals the show on this one, although I can say without fear of argument that Geoffrey Rush comes pretty close to doing it as well. Watching Depp and Rush spar in the same scene, both physically and verbally, is just a joy to watch, knowing that these two fine thespians seem to be having the time of their lives in doing so. On Stranger Tides does have pacing issues, and an excess of story to wade through to get to the juice, but for what it’s trying to be it succeeds magnificently. Rousing, often exciting and scary, and equally as bafflingly silly, the fourth Pirates film is recommended for those of you brave enough to check your brain at the door and wallow in some good old fashioned cinematic mayhem.

16 thoughts on “Movie Review – Pirates Of The Caribbean: On Stranger Tides”