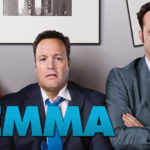 Director : Ron Howard
Year Of Release :  2011
Principal Cast :  Vince Vaughn, Kevin James, Jennifer Connelly, Winona Ryder, Channing Tatum, Queen Latifah.
Approx Running Time :  118 Minutes
Synopsis:  Ronny and Nick are best friends and partners in a car design firm – when Ronny sees Nick’s wife kissing another man, he must decide whether to tell his stressed out best friend or not: if he does he may ruin the life-changing deal they’re currently going through with vehicle manufacturer Dodge.
What we think :  Funnier than it has any right to be, and even  manages to make Vince Vaughn less annoying than I usually find him, The Dilemma is not a bad film at all. The central premise is core to the films humor – or, I think, its drama – and Vaughn gets a lot of mileage out of playing the tormented one of the cast. Ron Howard, who is rapidly developing into a decent director again after those Dan Brown misfires, keeps the tempo light and the balance between pathos and comedy juuust right – there’s no dilemma about choosing whether to watch this or not: you should.

Never having been a fan of Vince Vaughn’s “million words a minute” style of comedy, I approached The Dilemma with the reticence usually reserved for mortuary assistants opening the body bag for the first time. I kinda knew what to expect – Vaughn plays yet another good-but-flawed-dude trying to make the best of a bad situation, complete with ribald humor and adult themes, while the rest of the cast serve to support the weight of what was going to be a fairly light, fluffy script. I expected it, and to a point, I got what I paid for. I also got a bit more. The Dilemma sees Vaughn play Ronny, one half of a car design team with Nick (Kevin James), best friends since school, and whose own relationships seem (on the surface at least) to be heading in the right direction. However, while searching for the right place to propose to his long-term girlfriend Beth (Jennifer Connelly), Ronny sees Nicks wife Geneva (Winona Ryder) kissing another man (Channing Tatum). At the same time, Nick and Ronny have begun to work on a massively important deal with car-makers Dodge, and the deal depends entirely on Nick coming up with a certain kind of technology before their timeframe expires. With this added stress, Ronny must decide if Nick can handle the news of his wife’s infidelities, or if he should keep it to himself. As his anger towards Geneva grows, and she blackmails him into silence, Ronny’s moral conflict threatens to explode into his own relationship, and bring that down as well.

Here in Australia, The Dilemma was buried alongside a whole bunch of other new cinema releases, which meant the film didn’t get as much publicity (and critical kudos) as it should have at the time. Vince Vaughn delivers his usual schtick in this film, although his market share of comedy time is tempered by the larger-than-life Kevin James backing him up as Nick. Vaughn and James have a really nice screen chemistry, working as a duo makes for hilarious viewing. The film does wander into darker territory, however, thanks to the plot device of infidelity and the straightforward way director Ron Howard chooses to direct this facet of the story. It could have been a disaster, mixing comedy with the dramatic nature of this kind of plot, but Howard and Vaughn deliver the goods when required, and for that they are to be commended. Jennifer Connelly somehow decided to have a personality transplant before taking on this role, with a seemingly never-ending blank expression all across her moosh regardless of the required emotion; it was tough to see her as anything but just Plain Jane here. The major surprise package was Winona Ryder – yes, she of the shoplifting infamy – as Geneva, the conniving, cheating slimy wife of the too-good-for-her Nick.. at least, until some of Nick’s foibles are unearthed, and the scenario becomes even more complicated. Ryder delivers an excellent turn as Geneva, almost overcoming her seeming inability to age at all on-screen – dammit, she still looks twenty one here – and it’s to her credit that she takes a role like this to get her back into the industry. Geneva isn’t a sympathetic character at all, and Ryder brings her A-game to the bitch completely. The Dilemma is, at its heart, a character piece with snippets of humor thrown in. Don’t expect riotous laughs here, although when the laughs do come, they are pretty funny indeed. Expect a well written, well acted comedy/drama, one in which even the normally effusive Vince Vaughn plays it fairly straight this time. A rewarding film indeed. 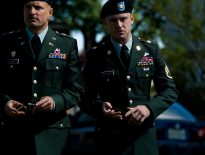 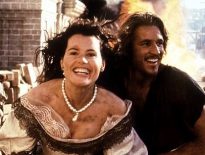