Director : Patrick Lussier
Year Of Release : 2011
Principal Cast : Nicolas Cage, William Fichtner, Amber Heard, Billy Burke, David Morse, Tom Atkins.
Approx Running Time : Far too f***ing long, man.
Synopsis: Some dude driving a car escapes from hell, returns to Earth to hunt down the people who stole his dead daughters baby. I think that’s what was happening in this movie.
What we think : I’m sorry, could you repeat the question?

Drive Angry is a terrible film. Beyond the pale for awfulness, it is hopefully another nail in the derelict career of one Nicolas Cage, a man for whom it seems no role is too stupid, nor any script too dreadfully inept. What on Earth can Hollywood hope to gain by promoting the man’s sheer lack of cinematic credibility? Yes, Cage once won an Oscar for Best Actor, but then, so did Robert DeNiro, and all he’s done since then is terribly stupid Parenting comedies, dull Cop Dramas and less-than-stellar “horror” films. Drive Angry is one of those films that probably seemed like a good idea at the time, if you think “the time” was that crazy night in Vegas when you were high on acid and the hookers were doing a threesome in the second bedroom while you bathed in a recently slaughtered ox’s blood. I was so tempted to do this film as one of our Mini Reviews, but I feel so violated by the imagery and concepts I’ve just witnessed, I need to purge myself of this… trash – I refuse to continue to call this turd a film – so I can continue my exploration of the fine medium of cinema unburdened. Therefore, prepare for a long form review of one of the worst films I’ve seen in the last week or so: Drive Angry.

John Milton (Nicolas Cage) has escaped from Hell to hunt down the satanic Jonah King (Billy Burke), the man who has stolen his daughters child in order to sacrifice it and bring about Hell On Earth. Befriending young waitress Piper (Amber Heard) and getting her to tag along on his wild adventures, Milton is also pursued by a mysterious man known only as The Accountant (William Fichtner), as well as various local law enforcement officials. Together, they drive through violence and mayhem, explosions and carnage, to thwart the apocalyptic plan of King’s evil ascension.

Where to begin with such a terrible .. I mean, turd? From the awesomely lame concept, to the dire, half-witted performances from the entire cast (with the exception of William Fichtner, who looks like he’s having an absolute blast in this!) and rounding out with the horrendous editing and sheer lack of interest anybody behind the camera appeared to have in making… oh, I don’t know… a good film: Drive Angry is one of the greatest examples of shithouse B-movies done so badly they make Mega Shark vs Giant Octopus look like Citizen Kane. The plot, such as it is, is awful, and by that I mean scratch-your-eyes-out-terrible, written by the director of this clusterf*ck, Patrick Lussier and his accomplice Todd Farmer. Lussier, best known as director of dreck like Dracula 2000, White Noise: The Light and My Bloody Valentine (in 3D, no less), seems to have carved a niche for himself out of giving the world more crappy films per lifetime than is actually possible – not even Ed Wood managed to subvert the cinematic medium as much as this hack has. To say Drive Angry is the “best film he’s directed yet” is like saying Auschwitz was one of the better concentration camps. Not to compare the holocaust to watching this film, but comparisons between a turd of a film like this, and other turds of films the man has cobbled together thanks to studio money, sticks in my craw.

The story, as awful as it is, is made even worse by an incomprehensible, dire script, bereft of anything resembling coherent thought or basic narrative logic. Much like that other horrendous Nic Cage film about a creature from Hell, Ghost Rider, Drive Angry is a hodgepodge of Judeo-Christian symbolism and religious mumbo-jumbo mixed together to form some sort of bizarre, hellish nightmare of a turd that borders on the schizophrenic. Ol’ Nic’s performance in it isn’t that much better, frankly, and I think my mate Saint Pauly said it best in his own review of this debacle: “Will this movie never end? Put me out of my misery, damn you!” I can’t tell what kind of point there is to this movie – is it a revenge film, a road trip (God, I hope I never get stuck in a car with Mr Cage and his scary weird freak-face!) or a Bible-bashing ode to redemption or something? Characters are about as well developed as an embryo, gagging about the various scenes of this turd with the emotional void of a freezer full of corpses. David Morse does his best to give depth to Milton’s friend Webster, although not even Morse can overcome the truly dreadful dialogue he’s forced to spout. Amber Heard, as the “star” female character Piper, is as meaningful as an aborted foetus. Why she’s even in this turd, other than to look halfway decent, I’ll never know. She can’t act, that much is certain. While watching her deliver her lines to the equally folorn Nic Cage, I was reminded of the wooden delivery accomplished by Maria Pitillo in the late-90’s remake of Godzilla. Man, it was that bad. Bill Burke, as the film’s resident Bad Guy, Jonah King, has a little more fun chewing the scenery, but even then he’s undone by both terrible cliched dialogue and some truly godawful special effects. Plus, he overacts the hell out of his character. First class ham, right there. Which is weird, because in a turd this bad, you’d think any overacting might actually improve the movie! About the only one having any fun in this turd is William Fichtner, as the Accountant. He smarms and snarks his way through the movie with a variety of creepy tics and mannerisms, all setting up his predicted confrontation with Milton (and eventually Jonah King) with the surety of a seasoned pro. Fichtner is about the only reason to watch this, and even then, you’ll be skipping forward to get through it.

And I haven’t even really touched on the ringleader of this crapfest – Nicolas Cage. The man looks like he’s had an enema of razor blades, for all the emotion and depth he brings to the screen. He has one look to give us the entire time – like he’s about to squirt out some diarrhea. Considering Cage once got hisself an Oscar for some film where he chewed a cockroach, his career seems stalled in the back-blocks of Hollywood A-list, forever doomed to B-movies about lost spirits, hellish flame-brandishing souls, with rage, murder and a snarly disposition as his only blankets of comfort. What is it with Cage and the supernatural films of late – Ghost Rider, Season of The Witch, Drive Angry – all had him locked in battle with the powers of the beyond. And all of them are crap. Mr Cage, I suggest you fire your agent and get back to making films like The Weather Man and Matchstick Men, as two examples. Or, better yet, just give up and never make another film again. Save us all a hell of a lot of time writing blog reviews of your crap, eh?

If the script and acting in this miasma aren’t enough to turn you off, then perhaps an enlightened, critical assessment of the production values might come in handy. Drive Angry is a disaster of a turd from almost every conceivable angle of design, production and execution. The turd looks like it was shot from out the back door of a moving prison escapee van, with grungy tones and a grim desperation about the cinematography. It’s not a pretty film, by any stretch, nor does it dwell on the lack of money they obviously didn’t have to make this thing. The visual effects, perhaps a part of the film you’d have hoped would outshine the terrible acting and story, are also sub-par – Drive Angry was shot in 3D (but viewed by yours truly in bog-standard 2D), and yet I can’t help thinking if this was more a hindrance than a help. The effects look fake, especially the copious green-screen in-car footage – those old films where the characters sit in a car with a projected backdrop out the rear window seems positively state-of-the-art by comparison. The stunts and driving footage feels rushed, like they were shooting this on too tight a time-frame; the film’s visual style feels rushed, almost condensed by pressure to meet a release date, and you get the sense that the editing room must have been a fairly hairy place to be come a week out from premiere. Indeed, Patrick Lussier’s editing work here (along with his son, Devin) is horrendously unaccomplished: I dare say that a blind four year old with no hearing and a manky hand might edit a better film than this. Sure, the film has no heart or soul to make us give a damn, but to reflect the lack of give-a-crap in the editing is unforgivable. It’s like watching a bunch of teenagers screw an inflatable doll. Initially, hilarious, but eventually, tedious.The action is frenetic, the brash, clashing mix of edits and shots to hammer home whatever point a particular scene might have soon becomes a mush of music-video flickerings: hey Patrick, if you’re going to make a film like this, at least make it so that we can actually understand what the hell is going on, okay?

Let’s not forget the score, either, which seems to consist of a load of death metal mixed with some other horrific stuff by Michael Wandmacher. I’m not sure what I was listening to, but it certainly didn’t endear itself to me – I’m quite sure that had I bothered to watch this film in reverse (actually, that might be quite amusing – Cage delivers a baby to the Devil, drives around with a hot chick in his car, and then goes to Hell – outstanding!) I might have heard some subliminal message to kill all the kittens in my neighborhood or something. It’s typically “hard core” music to a “hard core” film, a musical shorthand designed to put the audience in the right frame of mind to endure this crap. The sound mix for Drive Angry is, well, angry. The furious interplay between score, sound effects and the general mangling of the English language into something approximating dialogue is a cacophony, an endurance test for the aural-minded, like a marathon listening to six Anthrax concerts consecutively. There’s no subtlety to it – and there probably never could have been, considering what type of turd this is. Gunfire sounds like cannons, cars sound like roaring animals thundering across the Serengeti, the chanting drumbeat of impending doom like a klaxon call for whoever mixed the sound on this thing to just let fly with every trick in the 5.1 book.

Drive Angry is not a film any sane, normal, rational lover of cinema should endure. Some may talk about this film being a cheesy, gluttonous throwback to the pulp films of the 70’s, the kind of film satirized in the Grindhouse series, but it’s just a shitty, shitty film. There’s no sense of fun to be found here, just a dirge of a thing with no redemptive quality whatsoever. Anybody who had anything to do with Drive Angry, especially Nic Cage, you damnable monster, should hang their heads in shame at even releasing this appalling waste of celluloid. For anybody trying to get funding to make their dream film project, or any film project for that matter, this is an example of why you can’t get the cash. Studios seem content to let Nic Cage and his single facial expression keep making films. Avoid Drive Angry and save yourself the hassle. 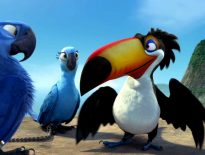 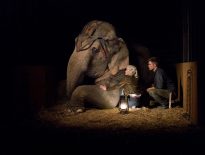