Director : Kelly Asbury
Year Of Release : 2011
Principal Cast : Voices of Emily Blunt, James McAvoy, Michael Caine, Jason Statham, Maggie Smith, Hulk Hogan, Patrick Stewart, Matt Lucas, Stephen Merchant, Jim Cummings, Ozzy Osborne, Dolly Parton, Julie Walters, Richard Wilson.
Approx Running Time : 84 Minutes
Synopsis: Love stuck garden gnomes must bring the long-running feud between their families to an end if they’re to have any chance at lasting happiness. And they meet a plastic garden flamingo.
What we think : Pretty entertaining, actually. I wasn’t expecting a lot out of Gnomeo & Juliet, since it was yet another take on the classic Shakespeare story (a fact the opening scene indeed pays testament to), but I’m happy to report that the film is amusing, well scripted and entirely charming in that British, self-reverential humor kind of way.

Shakespeare blah blah Romeo and Juliet blah blah animated films blah blah star casting blah blah. You know, most reviews of major animated films these days tend to focus on two things: the casting, and the story. What do you write about then, when the story is one of the greatest ever written, and the cast is made up of almost entirely legendary cinema icons both young and old?At least the animation is cool. Gnomeo & Juliet is based on Shakespeare’s classic tale of Romeo and Juliet, told from the point of view of – and here’s the weird part – garden gnomes. And Elton John songs. Two gardens, both alike in looks, in fair London, were this film is set, bear an ancient grudge to which we’re never privy to the origins, where civil blood makes civil hands unclean – the owners of two joined houses in suburban London have an enmity which has spread to even their back gardens, gardens populated by gnomes which come alive when their owners are out. One the one side, the Reds, and on the other, the Blues, both battle each other over a cause unknown. Thus begins the tale of Gnomeo and Juliet. 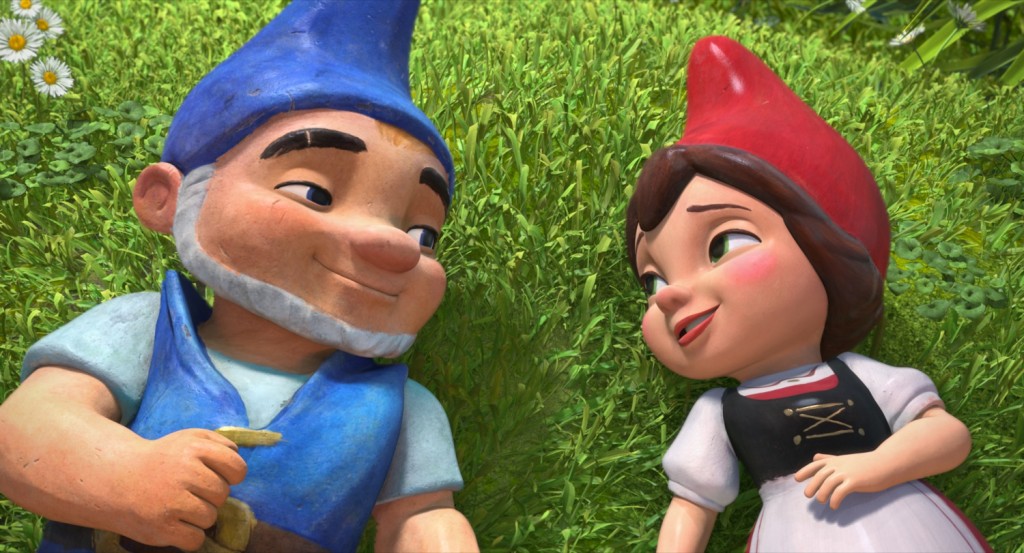 Is that a ceramic fault in your pants, or are you just happy to see me?

Juliet (Emily Blunt), the beautiful ceramic daughter of Lord Redbrick, belong to the side of the Reds (the Capulets), while Gnomeo (James McAvoy), son of Lady Bluebury (Maggie Smith) are on the side of the Blues, two sets of garden gnomes fighting for superiority over the respective gardens of their owners. Tybalt (Jason Statham) is the Red’s masculine proxy warrior, engaging Gnomeo in lawnmower races to determine which colored gnomes are the best. However, once night, Gnomeo meets Juliet in a garden over the back fence, and the two are immediately smitten. Of course, their love is tempered by the fact that by rights, they should be sworn enemies, however their feelings are too strong to be bound by their ancient enmity. Against the backdrop of civil unrest and gnomic war, Gnomeo and Juliet must fight to prove both their love for each other, and prevent both families of gnomes from destroying each other. 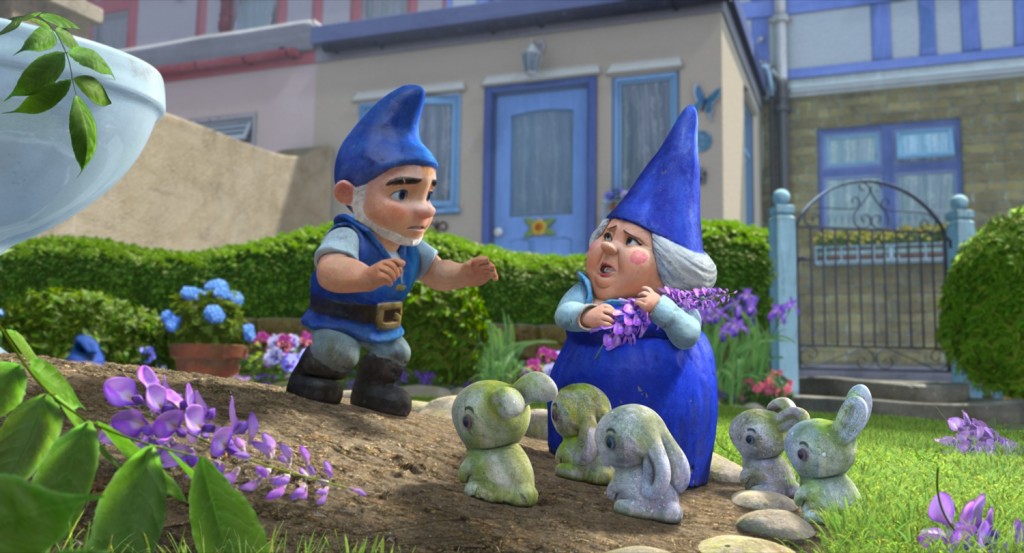 Geez Mom, I don’t need you to lexture me about safe sex! I’m ceramic, for Pete’s sake!

I’m the first to admit that the trailers for this film did nothing for me. I was so uninspired by what I thought I was going to see, I nearly didn’t watch this film when the wife brought it home on BluRay the other night. I’m glad I did, because I’m here to say, Gnomeo & Juliet is actually pretty good. Considering it’s Shakespeare filtered through the music of Elton John, and voiced by some of Britain’s top vocal talent, I laughed my ass off numerous times through this film. Sure, it has a few problems, like most films do, but the zest and energy with which the proceedings take place somehow works. I’m not sure how the mixture of one of the world most successful pop-rock artists and one of history’s most famous literary icons could have ever worked, but it does. It really does. The story closely follows the Shakespeare play, converting Tybalt, The Nurse (here a frog water-feature) and all the story’s original players into a variety of garden creatures, who magically come to life when nobody’s around. The score, and several songs, are based around the back catalog of Elton John, from Saturday Night’s Alright For Fighting, to Tiny Dancer and Your Song, all of which are integrated into the film so smoothly it’s almost unnoticeable at first. 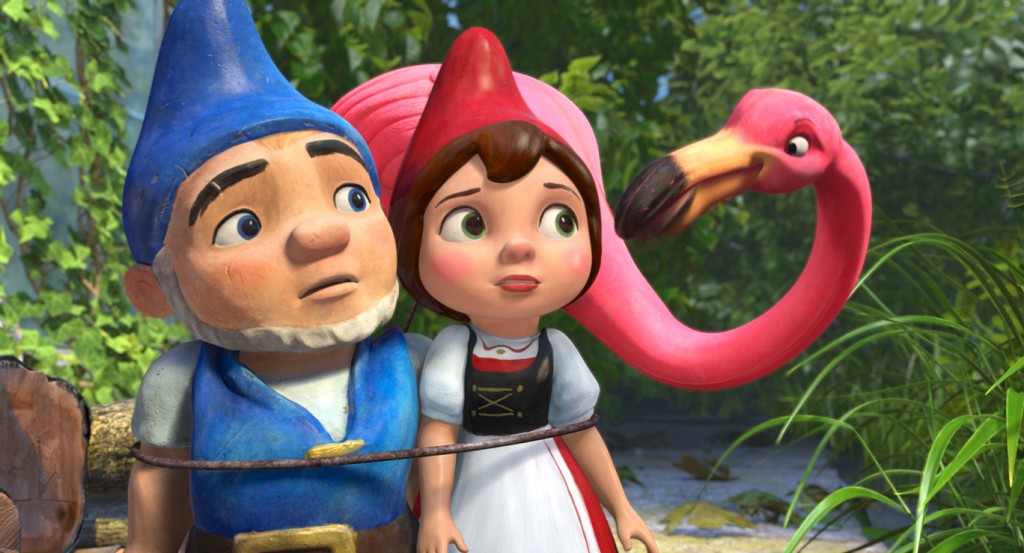 There’s something about a giant plastic flamingo, isn’t there…

The voice cast are uniformly excellent, with leads James McAvoy and Emily Blunt providing solid work as the two star-crossed lovers of the title. Dame Maggie Smith and Sir Michael Caine provide the voices for the matriarch and patriarch of their respective families, and while both have little impact in the overall story, their work here never crosses into “look at my stunt casting” glorification. Comedy relief is provided by Ashley Jensen, as Nanette, Juliets friend and confidant, a water-frog feature in the Capulet garden, and also by Jim Cummings’ flamboyant plastic pink flamingo, who brings the pair together when they seem set against each other. Jason Statham provides a hilarious Tybalt, the brutish red gnome with a grudge for Gnomeo. Patrick Stewart even scores a vocal impression of Shakespeare himself (I’m not gonna say how!), and keep an ear out for Hulk Hogan voicing a commercial for the Tim Allen-Home Improvement version of a lawnmower – the Terraferminator.. it’s hilarious! 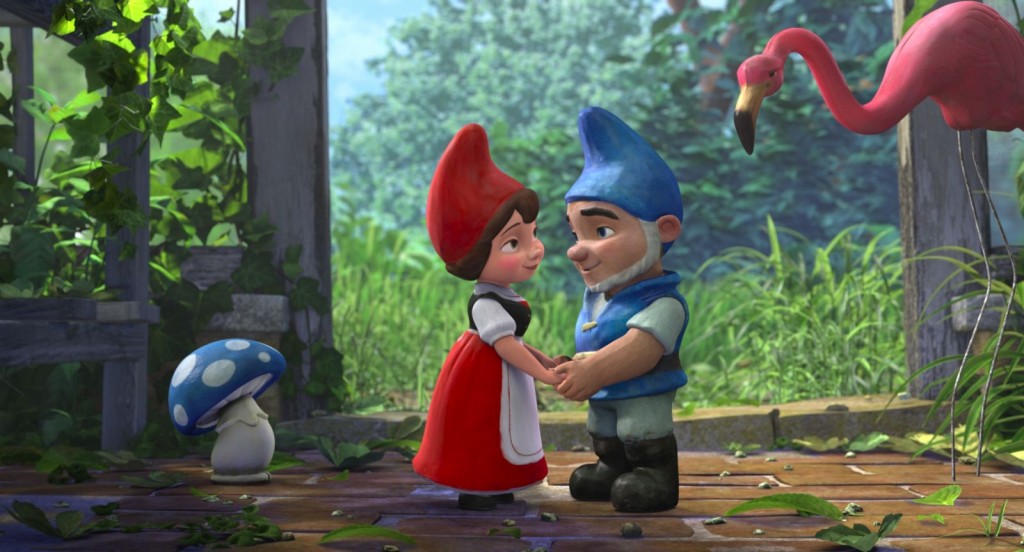 I’d kiss you if it wasn’t for the giant pink flamingo perving on your ass!

The animation, while perhaps not quite of the same breathtaking quality as Pixar’s latest work, is more than adequate for the story, and at times does manage to be truly gorgeous in its own right. The characters, most of whom are ceramic garden gnomes, are portrayed as such, with the scuffing and chipping many real-world garden gnomes might display; and the threat of smashing, after falling from a height or being struck by a solid object, is entirely real. Just why these gnomes come alive isn’t the point; rather, they are, and we’re invited into their world. The variety of garden objects, such as water feature frogs and plastic pink flamingos, all also come to life, and this textural method of storytelling allows a fully fledged world to exist on the screen – the story itself serves as a backdrop to a pretty funny set of circumstances. Yes, the film follows the Shakespeare story for the most part, although a few liberties have been taken in the interests of keeping the kiddies happy. The original story’s now famous finale, in which the two lovers take their own lives, is revised so that any thought of suicide is forgotten, but Gnomeo and Juliets eventual fate is still in the balance right through to the final frames. 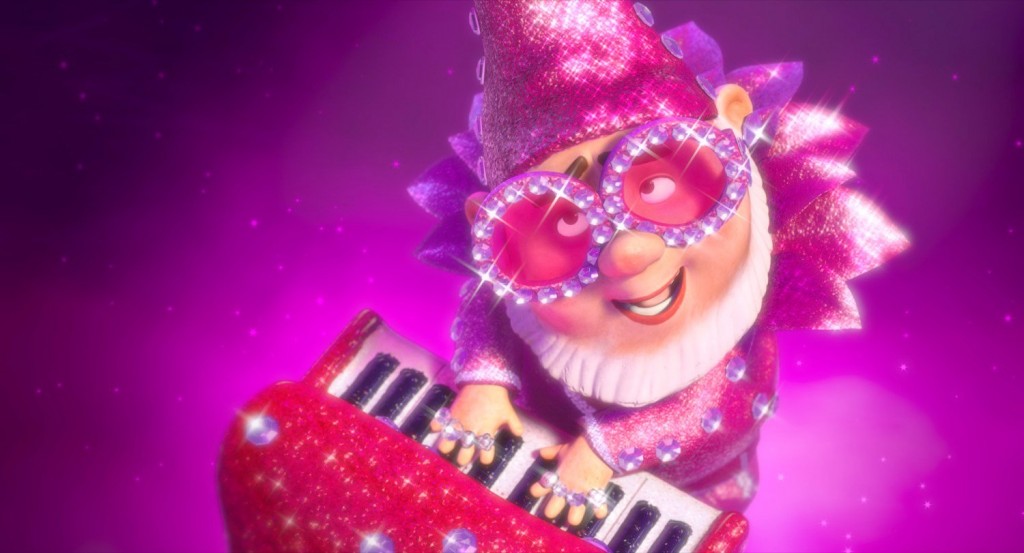 The music, consisting of a couple of new Elton John songs, and the score by James Newton Howard (who, as it turns out, was once a member in Elton’s band many years ago), which riffs on several melodies Elton is famous for, is wonderful. I never considered the overly populist songwriter to be a perfect match for the cinematic artform (The Lion King aside) as far as his style goes, but here it feels quite organic. The dulcet strains of love and hope which obliterated the major story elements of Road To El Dorado, here make perfect thematic sense. There’s a Moulin Rouge quality to the score, a wonderful lyricism which elevates the sweet-natured script and genuine vocal performances with the soaring serendipity of Bernie Taupins evocative lyrics. The music and songs are worked into the film well, so organically you almost forget that characters have burst into song. Some may find it trite, indeed, I think plenty will loathe the Disney-fied formula the film tends to follow – I was taken in by it all, hook, line and sinker. 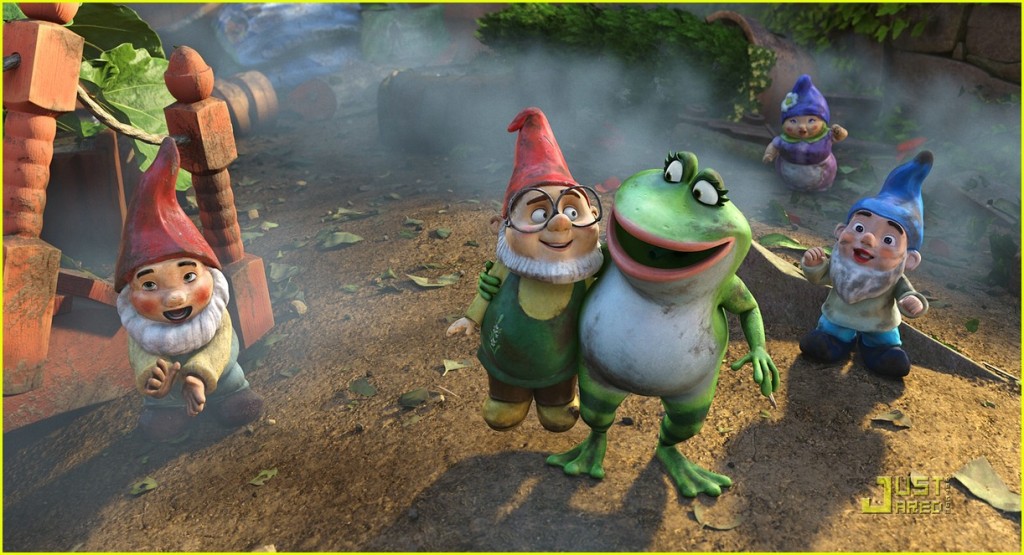 Gnomeo & Juliet might follow a formula, and follow it well, and it steals its core idea from one of history’s greatest writers, but dammit, this was a fun little film. I doubt it’ll ever be spoken of in the same breath as Toy Story 3, or even Shrek 3, but for simple, pure enjoyment of love, adventure and romance, Gnomeo & Juliet is a great testament to the power of love. And Elton John songs.