Director : Joseph Kosinski
Year Of Release : 2010
Principal Cast : Jeff Bridges, Garrett Hedland, Olivia Wilde, James Frain, Bruce Boxleitner, Martin Sheen, Beau Garrett, Daft Punk.
Approx Running Time : 120 Minutes
Synopsis: Sam Flynn, son of ENCOM founder Kevin Flynn, is an angry, rebellious young man who misses his father – only to discover that Kevin Flynn lives on inside the amazing computer program he created in the 80’s. Entering the world himself, he soon learns that along with his father and a young female program known as Quorra, they must defeat the evil plans of CLU, who wants to transport himself from the computer world into our own.
What we think : Dazzling, lopsided return to the world of Tron look like a million dollars, but lacks the emotional oomph the story so desperately demands. Newcomers to the Tron world may scratch their head in bemused confusion at all the special effects and lights, but those who believe will appreciate the effort that went into this movie. Visually arresting, yet devoid of any actual entertainment value aside from seeing money wasted on screen, Tron: Legacy elevates empty Hollywood filmmaking to a new level.

Damn, that film was loud. Okay, so I just finished watching Tron: Legacy on BluRay here at casa de fernby, and that’s all I can say about it. It’s loud. Sure, it’s pretty to watch, and slick as snot, but is it any good? Is a sequel, featuring characters whose only prior appearance was in a lacklustre Disney feature back in 1982 and now remodelled some 30 years later, about a kind of technology we’ve outgrown, going to be interesting to a modern audience? Knowing this, how do you make this film anyway? The merits of Tron, and now the sequel we’re here to talk about today, are few and far between. The original film was primarily a way of showcasing the then state-of-the-art digital prowess of the latest computer technology, shoehorned into a weird story about a guy who got sucked into a computer and ran around a lot. I can say that, you know, because I’m a film critic and I had to sit through Tron before I came to this movie – it’s my duty to inflict some kind of minimalist brain damage for my readers if it means you can avoid watching crap. I don’t like it, but that’s a fact. Tron, released in 1982, starred Jeff Bridges and Bruce Boxleitner, and was unique for the visual effects at the time (it won an Oscar for it’s special effects in the day, don’tcha know!), but looking back on it now, Tron seems like such a wistful idea of the technologically innocent that, by todays standards, it’s positively archaic. That, and it’s just not a very good film. Effects aside, Tron’s story and lethargic pace give one pause before referring to it as a “cult classic”, a term of endearment and not an endorsement in this case. So you sit around at your big-ass Hollywood desk and think about how much money you need to make a sequel to a film nobody remembers (I mean, only the die-hard fans even remembered Tron, and certainly nobody under the age of 25) and you happen to remember a film you watched as a kid, a film about cool light-cycles and flying round frisbees all flashy with lights, and you figure, hey man, current technology would allow us to do that so much easier, and so much better, and then you get your mates around to write a script, and then you go to Disney, who give you a bazillion dollars, and you make whatever the frick you want anyway and it ends up being called Tron: Legacy. 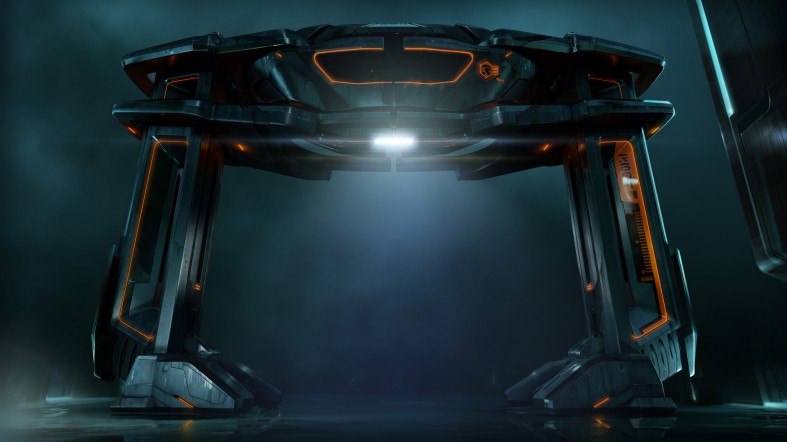 Before you read on, you’re probably sitting there thinking that I’ve already given away my thoughts on Tron: Legacy before we get to the juicy stuff. You’re right, man. I have. But I don’t care. Tron: Legacy, much like Tron before it, is a vacant, empty shell of a film, a film trying to dazzle you with plenty of bells and whistles while hiding the fact that it’s poorly written, unenthusiastic tripe with only one thing in its sights: your wallet and the money inside. Sure, polish a Volkswagen long enough and it might look pretty damn decent, but it’s still a Volkswagen. And you still wouldn’t drive it. Not even if the stereo was pretty decent. Going for a car analagy for a film about computers might seem like a stretch, but hey, what do I know about computers. The best I can do is defrag my D drive and hope the thing doesn’t crash. Anyway, Tron: Legacy certainly looks pretty sweet, but in the end it doesn’t offer much. 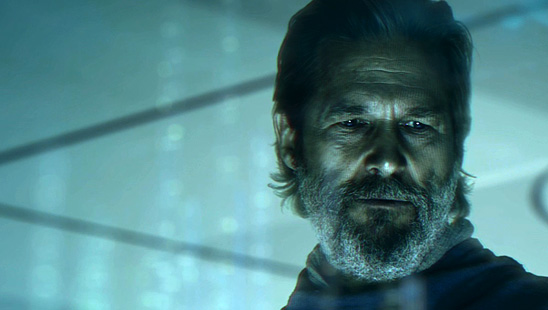 Sam Flynn (Garrett Hedlund) is lost and confused after his father, Kevin Flynn (Jeff Bridges) disappears when he’s seven, leaving him the sole heir to the computer company he created, ENCOM. Sam grows up resentful of his fathers disappearance, a frustration set down on the shoulders of his fathers’ friend (and Tron co-star) Alan Bradley (Bruce Boxleitner), who has adopted Sam as a surrogate son. When Sam is given a message to go to Kevin’s old arcade parlour, he does so grudgingly, only to find himself accidentally sucked into the same world of the computer as his father was many years earlier. Suddenly, all the stories his father told him about Tron and the world of the Master Control Program are made real, and Sam discovers that the program invented by his father, CLU (Jeff Bridges, digitally de-aged thanks to millions of dollars of CGI) has taken control and threatens the real world with his plans. Escaping the city thanks to the assistance of a young female program Quorra (pronounced like “Cora”, and played by House star Olivia Wilde), who ends up taking Sam to reunite with his father for the first time in years. Together, they plan to escape the Grid via the portal to the outside world, with their only threat the omnipresent CLU, who seeks to build and army and transport it to our world and rule forever. I’m sure there was plenty more, but the cloying dialogue and semi-serious Zen-master subtext just felt like being given an enema with a wire scourer. Painful. 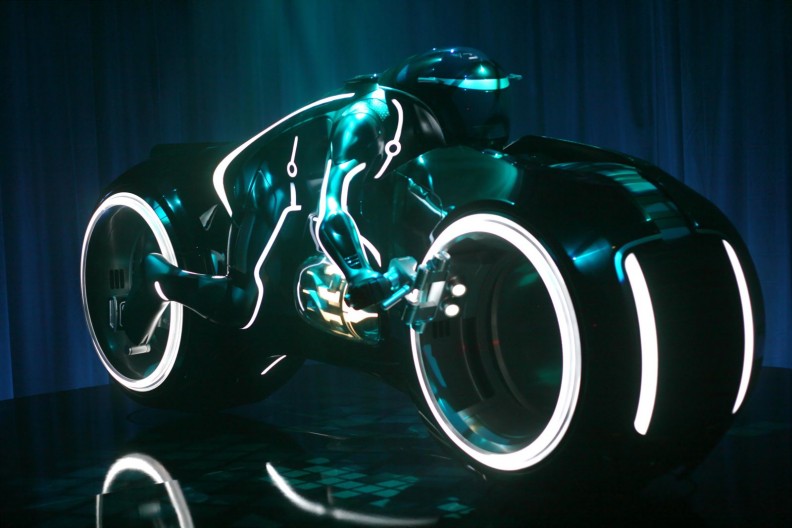 Simply put, this film is a designers wet dream. No, strike that. It’s a designers multiple orgasm, oiled up and ready to pop like a honeymooners willie. Tron: Legacy makes supreme use of current computer technology, which is apt considering the film’s background and story arc. Visually, Tron: Legacy is astonishing, with an entire world inside a computer looking sharp and crisp and actually kinda inviting. But through all the lights and dazzling visual aesthetic, the veneer of fakery can still be seen. Admittedly, it’s hard to see, but it’s there. Tron: Legacy looks amazing. The iconic light-cycles, the frisbee battles between gamers, even the updated designs of the solar sailors from the original film all look amazing, and you can see the love that went into their digital creation; much like the Star Wars Prequels, the film suffers too much from digital fatigue for me, because after a while it all became a bit of a blur of sound and colour, lacking the differentiate material to keep my attention from being lost in the pixels and gigabytes of information. Overload, if you will.

One of the better visual effects…

As far as the cast go, only Jeff Bridges fares really well out of this. Sure, his dialogue is a hokey as everyone else’s, but he carries it off with such panache you can forgive him a little bit. Garrett Hedlund tries his best with the thin material he’s given, but with a poorly written motivation (the motivation isn’t bad, it’s just the execution of it by the screenplay is off-key) and a lack of chemistry with female co-star (and eventual love interest, I wager) Olivia Wilde, his turn as Sam Flynn is like playing Command And Conquer on a Commodore 64. Excruciating – if not impossible. Olivia Wilde acquits herself fairly well, again beset with a poorly developed script and some sort of half-assed backstory (apparently she’s some kind of Ultimate Being, although the way she acts you wouldn’t think it) but her looks are what counts: she’s eye candy at best, and if that’s the role for her, she does well enough. Martin Sheen appears as some kind of androgynous club owner midway through, aptly named Zuse (you’ll see why), hamming his way through this teeth-clenching act with his dignity unraveling around him. His leering grin and lecherous ambivalence make for an inherently unlikable character, yet Sheen manages to barely scrape through the part with just enough good-old-British-charm: he’s lucky. He fares better than poor James Frain, as CLU’s right hand man Jarvis, looking like some sort of Jean Paul Gautlier op-shop reject. The extended cameo from Bruce Boxleitner tips the hat to the original film, but his role is underwritten (much like as in Tron) and ultimately worthless. 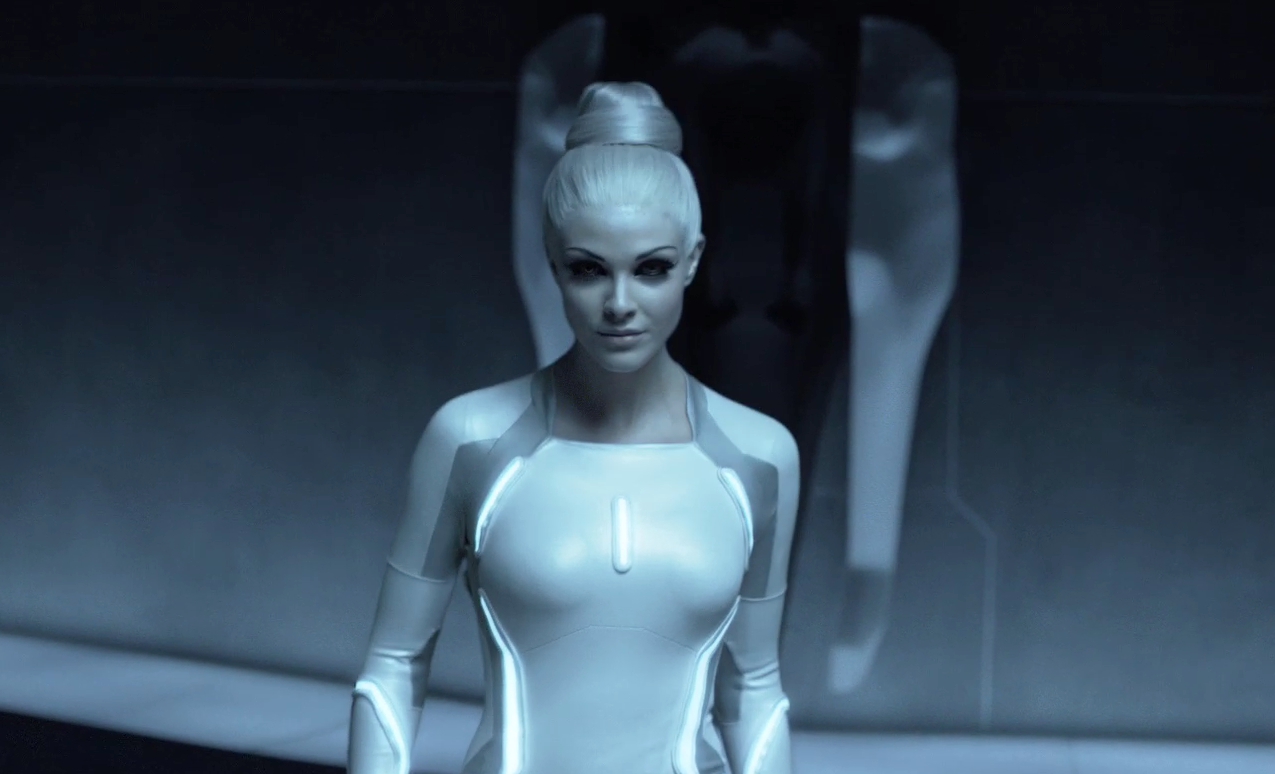 Now, nobody claims to be more an advocate of empty, spectacle entertainment more than I. It’s a stated fact around these parts that I enjoy everything from Woody Allen to Michael Bay, the latter of course being the current poster child for all that is (apparently) wrong with the Hollywood machine. I appreciate a good brainless action flick as well as the next person, even to the point of overlooking some pretty large leaps in logic and narrative believability. But something about Tron: Legacy’s emptiness, its inherent disassociation with the real world simply by its very concept, was too much for me to overcome. I couldn’t relate, no matter how I tried, and the resulting malasie that swept over me during all this drained any ergs of energy I once had and left them limply straining through the parts of my brain left unaffected by this films inadequacy. The story just lacks emotional weight, even if the entire thing is all about family connections, and I point the blame for that at the script, as well as the overwhelming desire of the production team to obliterate subtlety with ineffective substance, for this fact. The story lacks an organic base (in a film about technology, that’s a little ironic), muddles along between action sequences, and eventually trips over the line in a blaze of “aren’t we clever” storytelling that leaves as many new questions as have just been answered. The action sequences are, admittedly, quite well staged, and the light-cycle sequence in particular is most assuredly going to sell a lot of home theatres and plasma televisions in the years to come. But when there’s talking to be done, the film bogs down like a snake through mud. The leaden pacing and awkwardly scripted “plot development” goes nowhere fast, and eventually you kinda hope something happens to get to the next action sequence a lot quicker. The balance between action and story is off by a long way. 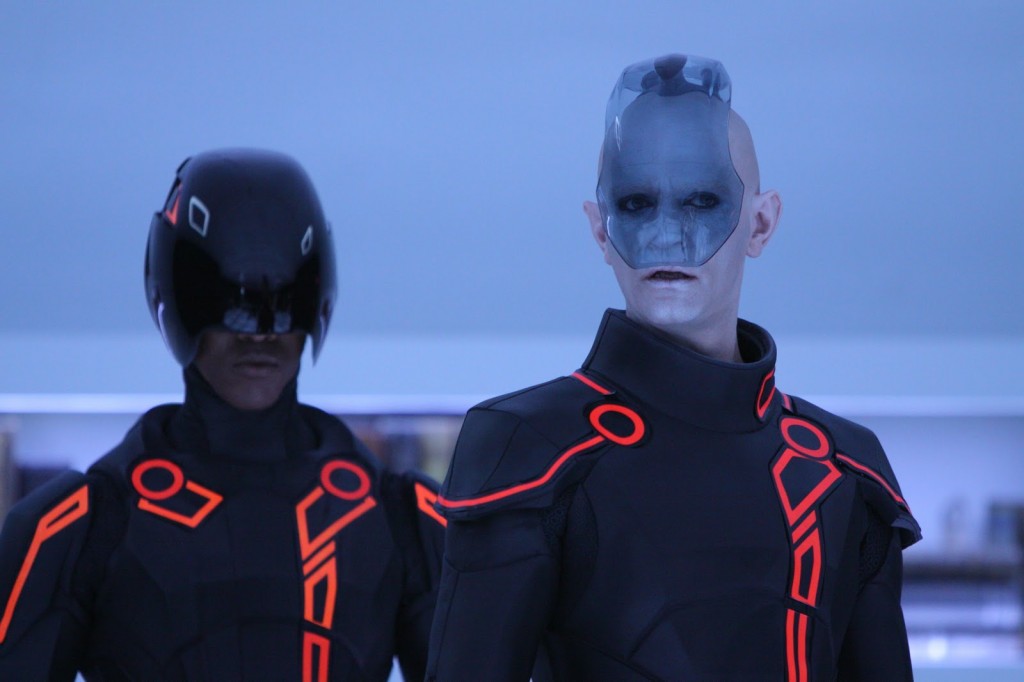 At some stage I intend to sit down and dig my way through the inevitable Tron review, but for now, let me just state for the record that both Tron and it’s flashier sequel, Legacy, lack any interest value for me: perhaps I’m not this franchise’s target audience, but I thought the modern update might have at least a hint of quality story behind it to back up all the millions thrown at the CGI. Tron: Legacy is a sure-fire winner on BluRay, for its amazing visuals and game-changing audio presentation, but if you dig any deeper into the game you’ll be sorely disappointed. The story sags under the expectation of the visual element, and that’s the bit that pisses me off.