Director : Shekhar Kapur
Year Of Release : 2007
Principal Cast : Cate Blanchett, Clive Owen, Geoffrey Rush, Samantha Morton, Abbie Cornish, Jordi Molla, Susan Lynch, Rhys Ifans, Eddie Redmayne, Tom Hollander, David Threlfall, Adam Godley, Laurence Fox.
Awards : Nominated: Academy Awards – Best Actress (Cate Blanchett)
Approx Running Time : 120 Minutes
Synopsis: The reign of Elizabeth is threatened by the escalation of war with Spain, and the depleted Navy is incapable of defending the shores of England against the much stronger Spanish armada.
What we think : Stunning, sweeping epic lacks the freshness of the original, but still sparkles. Devoid of emotional weight, The Golden Age isn’t the best film you’ve ever seen, nor is it an entirely accurate historical narrative of Elizabeth’s reign: but it is entertaining, and for that, should be seen.

After Elizabeth scored countless award nominations, an inordinate variety of positive critical reviews and a surprising commercial financial profit, I guess it was only natural that eventually, director Shekhar Kapur would be granted an opportunity to reprise his look into a period of English history ripe for the cinema screen: and so we get Elizabeth: The Golden Age. Whereas the original film focussed primarily on Elizabeth’s early reign of England, the sequel continues her story as she solidifies her position within the European power-hungry countries, trying to thwart the plans of both France and Spain to usurp her and claim Britain for their own. I’ve read numerous reviews of this film in the past, particularly at the time it was released theatrically, and I remember them to be rather pointed and critical of the film for a perceived increase in melodrama over good drama, and I’m here to put that opinion to rest. Watching both Elizabeth and this film back to back was hardly a chore, considering the depth of talent on screen and behind – Cate Blanchett is always great to watch, a powerful screen presence who seems to shoulder such an ambitious film saga with the aplomb of somebody twice her experience. Make no mistake, she’s no Galadriel here – she’s a dervish of anger and emotion, emotion drawn from her love of her country, and the desire to see England’s enemies sent packing. 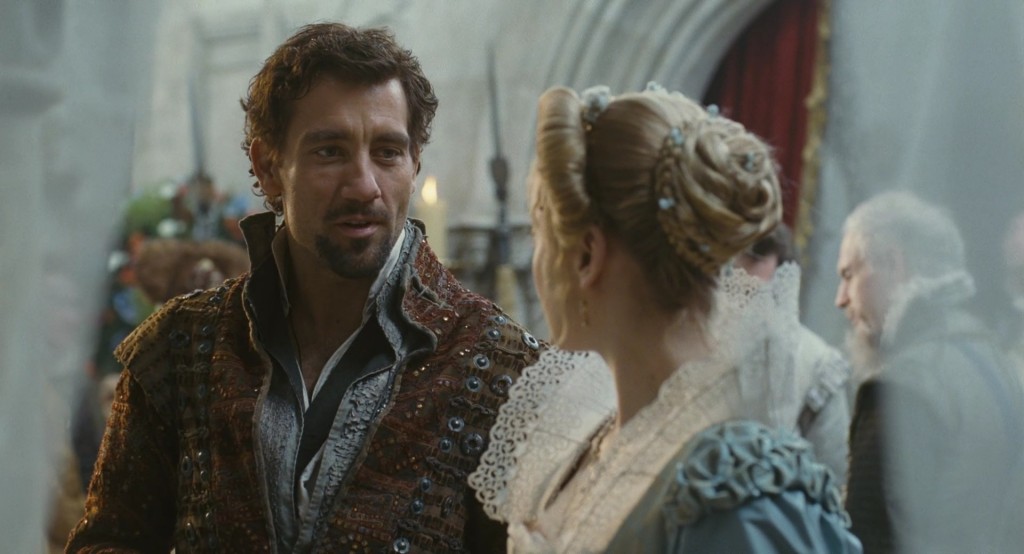 Just wondering if you could direct me to the brothel?

Set in the latter part of her reign, The Golden Age sees the rise of Spain as a power in Europe, with the Spanish King Phillip II seeking to go to war with the weaker England, Elizabeth (Cate Blanchett) finds herself beset on all sides by conspiracies and plans to usurp her. Her confidante, Walsingham (Geoffrey Rush) work to uncover the various plots against Elizabeth’s life, while recently returned adventurer Walter Raleigh (Clive Owen) finds himself in a strangely reticent relationship with the Queen. Under continued pressure to bear a child, lest the monarchy pass to the imprisoned Queen of Scotts, Mary, who is the Queens next of kin, Elizabeth must also find a suitor worthy of her love, a facet she’s initially uncomfortable having to deal with. So when Spain eventually does declare war on England, and sends their fleet across the channel to sail up the Thames and capture London, Elizabeth implores her military to fight until their last breath, to thwart the plans of the Spanish armada, and to save England. 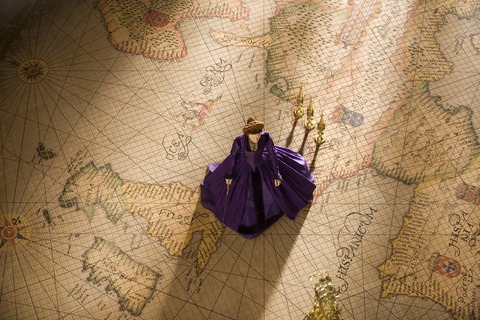 Wondering where she’d left her GPS….

It’s fair to say that plenty in The Golden Age is a liberally altered dose of historical fact, a point which raised the ire of many critics at the time. Dramatic and creative license aside, I think The Golden Age is a wonderful yarn about the times of Elizabeth and her followers. Once more, the religious aspects of the time are prominently displayed, again raising the ire of modern critics for being overtly anti-Catholic – really guys, whichever way you try and portray one side of a conflict, the other side will always claim bias against it… the fact remains that religious animosity was rife in England at the time, so any portrayal of antagonism by either Catholics or Protestants is going to annoy somebody. Get over it. The script is pretty thick with unsaid irony and duplicity, the subtle nuances of which could be lost on an audience unfamiliar with the period and social ettiqute of the time. William Nicholson and Michael Hirst have gone for a more swirling look at historical fact, rather than the original films’ more straightforward narrative and plot devices. Elizabeth only gets herself all anti-social on two occasions: once when screaming invective at the departing Spanish ambassador for being a twat, and the next when imploring her troops Braveheart-style to take the fight to the Spanish and win at any cost. Sometimes, the screenplay does tend to the silly, the veneer of “this is a film” as opposed to “this is a story” threatening to undo the original films good work. 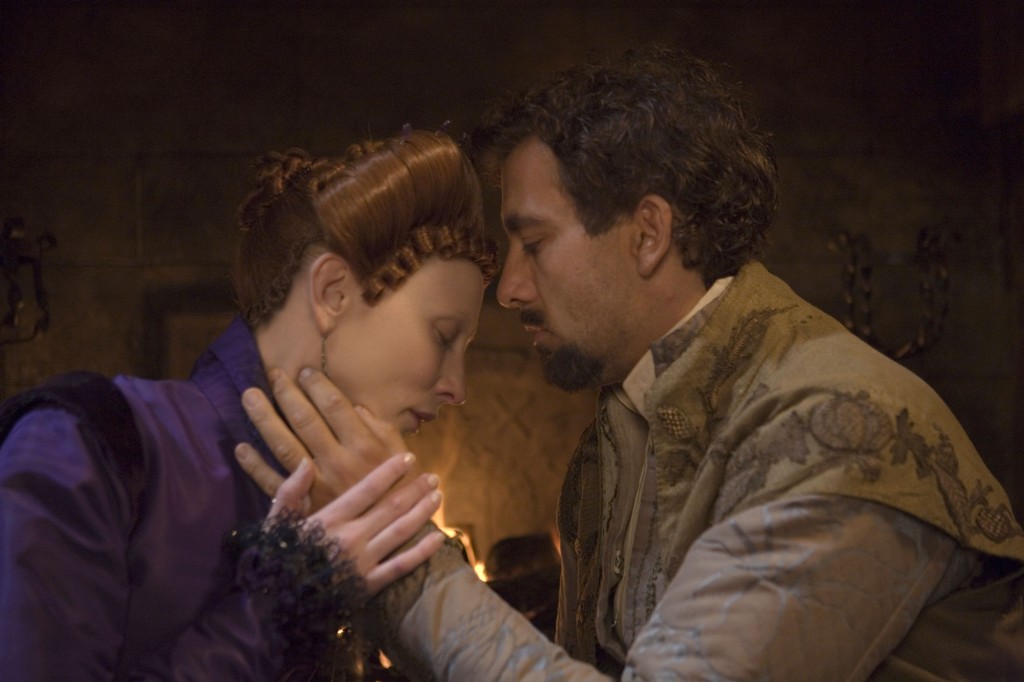 You smell like the Tower of London, but I love you anyway!!!

The cast are superb in their respective roles, although several are criminally underwritten. Geoffrey Rush is almost cast aside save a few glorified cameo appearances as Walsingham, returning from film 1 to do the secret work of Elizabeth. Blanchett, as the Queen herself, is once again simply luminous in the title role, her performance underscored by yet another Best Actress  Oscar nomination for the role. Her major counterpart, Clive Owen, does a serviceable job as Raleigh, although the role is somewhat ambivalent to their relationship and, rather than develop it properly, seems to be a constant stream of glances and longing stares. Weepy handkerchief-wielding ladies-in-waiting aside, Raleigh does little to impress the Queen save tell her about his adventures, but his much-travelled worldly ways don’t appear to give him confidence to approach the Queen with his desires. Samantha Morton plays a pivotal role as the woman who comes between Elizabeth and Raleigh, and she does a pretty good job in what ends up being a thankless task. She’s given little to do save look nice and pout a bit. The cast are let down by the screenplay and the at-times vapid dialogue they’re forced to spout, and director Kapur can’t seem to bring a sense of drama to the otherwise aloof narrative. 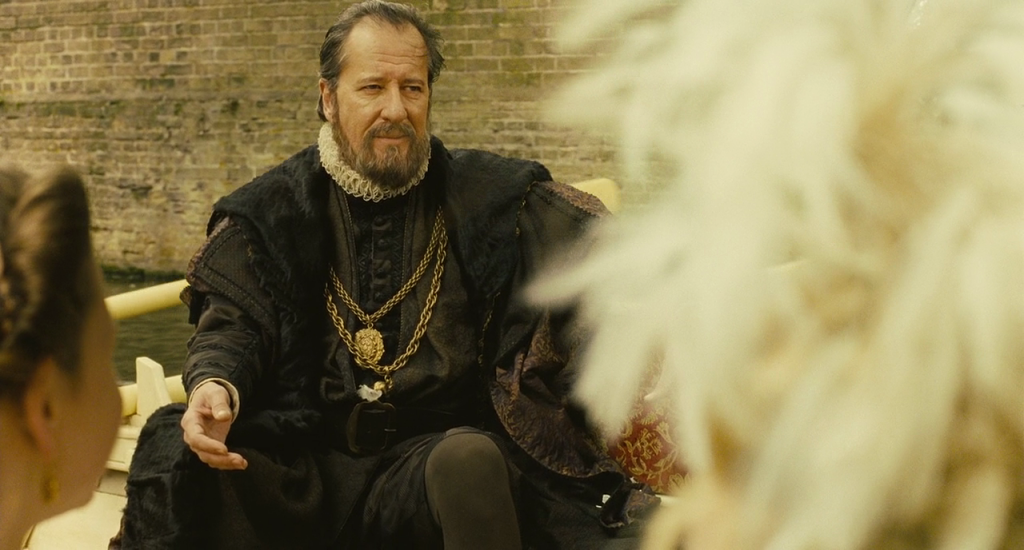 Nahh, this bling ain’t like the good stuff I got at home….

Once more, we’re treated the a tour of some of England’s most stunning locations, as The Golden Age makes use of some spectacular real-life buildings and some purpose built sets. The Golden Age has one of the most faahhhbulous production designs I’ve seen on screen in ages, from the costuming to the visual style to the amazing special effects: everything about The Golden Age screams “big budget”. Perhaps to the detriment of the story. Still, from a visual standpoint, The Golden Age is wonderful to watch. The same could be said of it’s musical score, a wonderfully evocative piece from Indian composer A R Rahman and Scottish-born Craig Armstrong. I think the music really does serve the story, rather than be subservient to it, and it’s a pleasure to listen to. 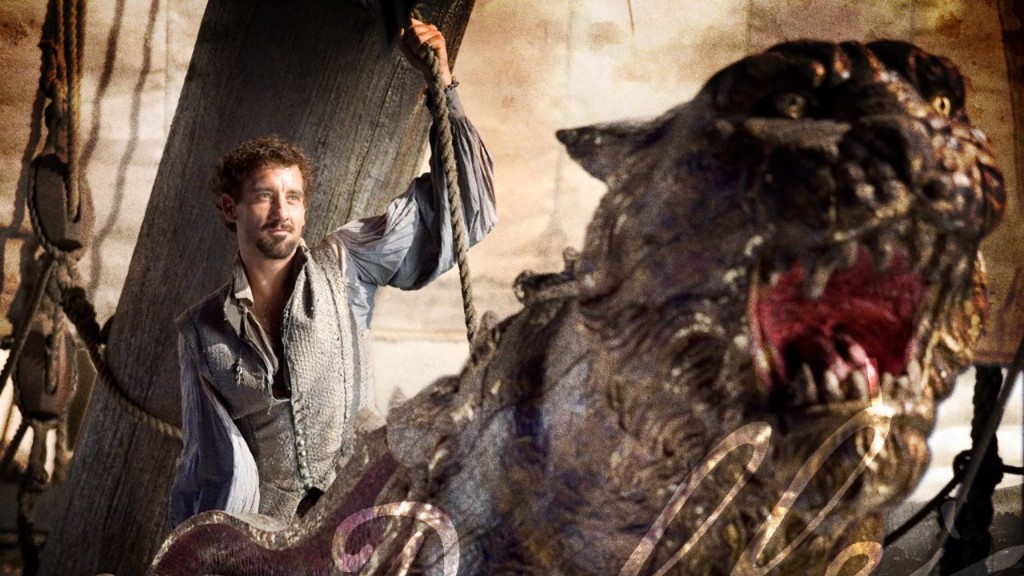 Elizabeth: The Golden Age ain’t an extraordinary film by any stretch, and it’s easy to try comparing the two films and finding the latter lacking in the same emphatic sense of style and tone the original had in spades. A script lacking genuine charm, and a smattering of revisionist historical “facts” make The Golden Age hardly the most pure portrayal of Elizabethan England even put to screen, but the film, as it is, is still an enjoyable watch regardless. The production design is stunning, but the story and script isn’t up to the same standard, meaning The Golden Age has a little copper tarnish on its elegant sheen. Enjoyable, but hardly memorable.