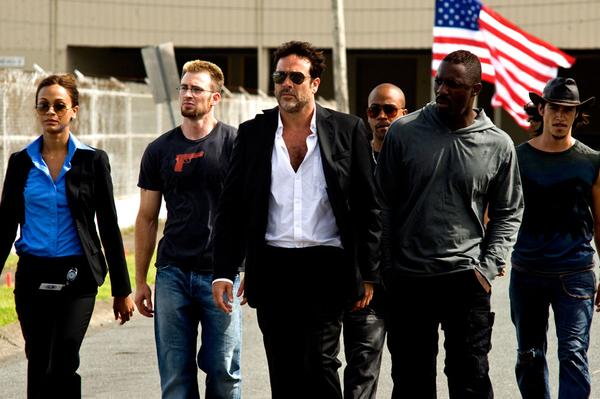 Director : Silvain White
Year Of Release : 2010
Principal Cast : Jeffrey Dean Morgan, Zoe Saldana, Chris Evans, Idris Elba, Jason Patrick, Holt McCallany, Columbus Short.
Approx Running Time : 97 Minutes
Synopsis: Betrayed by their government, a crew of special forces marines hunt down the man who set them up to take the fall for a mission-gone-wrong.
What we think : Slick, action-packed debacle of hubris gone wrong, as a cast of talent is put to the sword by a vacant script and an even worse central villain. Action set-pieces are limp and unexciting, and the dialogue and scripting is – frankly – atrocious. The potential in The Losers was extremely high, yet the execution comes off like a deflated silicone implant: still a silicone implant but one which isn’t delivering the impact it could.

Seems like 2010 was the year for ensemble action flicks, after The Losers was accompanied into cinemas by The Expendables and The A Team, both films smashing The Losers in commercial acclaim and success. The Losers is based on the DC Vertigo comic series of the same name, which should have ensured at least some semblance of quality from the get-go: as it stands, The Losers is, to paraphrase Dr Evil, the “diet coke of ensemble action flicks”, lacking both the balls of The Expendables, and the slick humor and zest of The A Team. I’m all for gratuitous blow-em-up action flicks, don’t get me wrong, and hell, I even like the shitty ones from time to time (long time readers will know of my penchant for Michael Bay films!) but a line must be drawn somewhere, and The Losers falls below it. Empty, testosterone-driven flicks like this, were they to be entertaining, can be just as enthralling as the latest Oscar winning Best Picture, even if it is for different reasons. The Losers, however, suffers from a dearth of fun within its shallow framework, meaning it’s neither serious nor comedic when it should be both.

A group of Special Forces operatives, led by Clay (Morgan, in fine cigar-chewing form) are sent on a mission to destroy the headquarters for a Bolivian drug lord. When a bunch of kids they manage to save from the compound’s destruction are killed when their rescue craft is also destroyed, the platoon is hung out to dry by their government. The one responsible for their betrayal, a voice known only as Max, seems to have all the answers to their problems, so Clay makes a promise that he’ll get them all home and exact revenge on Max along the way. Cue femme fatale Zoe Saldana, as Aisha, an operative with knowledge to get them back across the US border and into the sightline of CIA operative Max (Jason Patrick). Aisha and Clay embark on a sexual relationship which threatens to jeapordize their mission to find and kill Max, leaving the group to fracture at the moment it needs to be a single unit. Double-crosses and further betrayals abound.

A film like this really only needs a couple of things to succeed well; it needs a central character we can all embrace as the “hero” archetype, it needs a central villain we can all despise and enjoy seeing being killed, and it enjoys a touch of female flesh to keep the male demographic happy in between the explosions. The film has only one of those things, and doesn’t explore that one thing very well anyway. The opening of the film, in which our group of operatives approach, appraise and execute their mission, is pretty tense and exciting, to be honest, and it will lead the viewer to expect a lot more for the rest of the film. Then, when the group of kids all die in a horrifying blaze of destruction (yeah, that’s right, kill a bunch of kids to sell your story) the film turns into a moping, angsty wrestle-of-conscious between Clay’s stoic commander and Saldana’s ubiquitously sexy female operative, neither of whom are fleshed out for us to really embrace. In fact, the film does tend to find it hard to place the “lead character” element in the right spot, so we don’t really know who we’re following as a character. The PG-13 ethos of the film prevents realistic violence or swearing, heck, even the sweaty sex scene between Clay and Aisha has the appeal of a Nic Cage porno. The lack of a real hard edge to this film brings with it an inherent problem – these guys are supposedly rough-as-guts black ops, yet they don’t kick ass like it. They talk a lot of talk, but the film never backs that talk up with any action deserving of either the title “The Losers” or the expectation a group of special forces brings with it.

The inherent problem with the film, PG13 mentality aside, is the script from Peter Berg and James Vanderbilt. Berg, who has become something of an A-list director with Hancock and The Kingdom in recent years, should know better, and I suspect they were trying too hard to be slavish to the original source material than giving us something truly cinematic. The script tries to be cool, tries to be slick and adventurous, but remains stuck in the rut many action flicks have endured over the years – cornball characters take the place of actual characters, villains become almost pantomime caricatures of their potential, and the action feels superficial at best. At least Stallone gave us real action in The Expendables. Here, the action doesn’t ever get out of first gear. The script is littered with dreadful dialogue, most of which exists only to further the story in the most superficial way possible, and what little humor we get is in the actions of the character instead of any meaningful screenplay effort. There’s a distinct lack of charm to be had here, replaced instead by a sense of forlorn “at least we tried” inevitability.

The characters are poorly written, criminally underdeveloped, and at times atrociously acted. Jeff Morgan should have done better, and Jason Patrick should have at least watched himself back once or twice to see just how appalling his Max character portrayal is. Patrick is the single reason this film is complete shit, as opposed to only being mildly shit, because he hams it up so badly as the main villain we can’t be sure if he’s going for laughs or not. It’s as uneven a film villain as you’re ever likely to see. Watching his performance here, you start to wonder just how this film is going to end – the bad guy is portrayed as the only funny character of the film (let’s not forget the usually hilarious Chris Evans, who tries and fails here to get a laugh at times) and it’s hard to associate his comedic methods and actions with the brutal deaths of all those kids at the very beginning – part of me wanted him to suffer a grisly, bloody death, and the other part of me wanted a comedy routine before he went out. He’s more Dr Evil than Dr Death. I half expected him to turn to the camera and affect Mike Meyers for a moment, asking if he could have “one billion dollars!” – he doesn’t, but it would have been funny I guess. The rest of the black ops team are the usual gang of hard-nuts and action junkies, and while the film offers tactit development in their characters, it barely registers as a blip on the audience radar.

Director Silvain White steals his cool camera angles and editing style from other, better action directors (Michael Bay, Richard Donner and a slew of others) and cobbles together a mishmash of poorly executed non-action sequences which deliver neither the requisite excitement or the expected carnage, resulting in a debilitating deficit of set-pieces that actually engage the audience. A street-heist shoot out is a key highlight, but the final result on film delivers a surprising lack of punch for such a costly and obviously pivotal scene. I’m not sure if it was the camerawork, or the editing, or just the fact that by this stage I’d given up hope of a decent film being presented, that makes The Losers such a disappointment. Either way, I can’t recommend this film to you if you’re after a good time with a crowd at home on a Saturday night. Standing next to The Expendables and The A Team, The Losers feels like the poor cousin who doesn’t wear shoes and sleeps on a mat on the floor. I’m sure the filmmakers were catering to an audience, I’m just not sure which audience it is – older viewers will be bored with the cartoony characters, and younger viewers looking for harder edged violence and action will be annoyed with the lack of such. A disappointment through and through.

6 thoughts on “Movie Review – Losers, The”