Director : Bryan Bertino
Year Of Release : 2008
Principal Cast : Liv Tyler, Scott Speedman, Glen Howerton.
Approx Running Time : 88 Minutes (Unrated Version)
Synopsis: A young couple are terrorised by a trio of masked intruders at their summer home – what they want is unknown, but creating fear is on the agenda.
What we think : Dark, gritty, terrifying thriller which was criminally underrated by audiences upon release, this slow-burn terror fest relies solely on the dread and fright of the unknown – there’s no graphic torture-porn or Saw-esque horror here folks. Dark and foreboding, with a subtle dread pallor through it’s somewhat 70’s inspired colour palette, The Strangers is a well made, convincing fright-fest from first time director Bertino.

It’s taken me a while to watch this film. Reason? I generally don’t go in for scary films, especially ones I think are going to be horrifically gory (Saw, I’m staring at your bloody corpse here!), but particularly ones that play with your head. The Strangers is one such film – there’s virtually no gore to speak of, but the film will definitely screw with your head long after you’ve finished watching it. It’s the kind of film that I often think Hitchcock might have made were he alive today, and it’s definitely the kind of film M Night Shyamalan wishes he could still make. It’s that kind of Sixth Sense creepy, the flashes of violence and a WTF head-space occupying a fair proportion of the film. This is a head-under-the-covers, hide behind the couch sort of scare film, relying less on moments of “boo” and more on moments of “oh God he’s standing right behind her turn around you imbecile turn around and see that knife oh shit it’s too late SPLAT”. It’s also the kind of film surround sound was made for. Chilling, disconcerting foley effects permeate this film, and while most modern films have what can only be considered an over-abundance of audio, The Strangers is a great example of what we don’t hear, the sound of eerie silence and spooky dread. It’s the kind of Hitchcockian flavoured thriller film I’ve been aching for between the mindless slop of post-modern pop-culture vomit Hollywood calls horror. Horror doesn’t have to be all blood and gore (although others may disagree) to be effective. The off-screen sound of a knife sliding into flesh can often be more effective, and more affecting, than the visuals: our mind fills in the blanks and heightens the emotion. Powerful stuff, and something The Strangers takes to new heights. 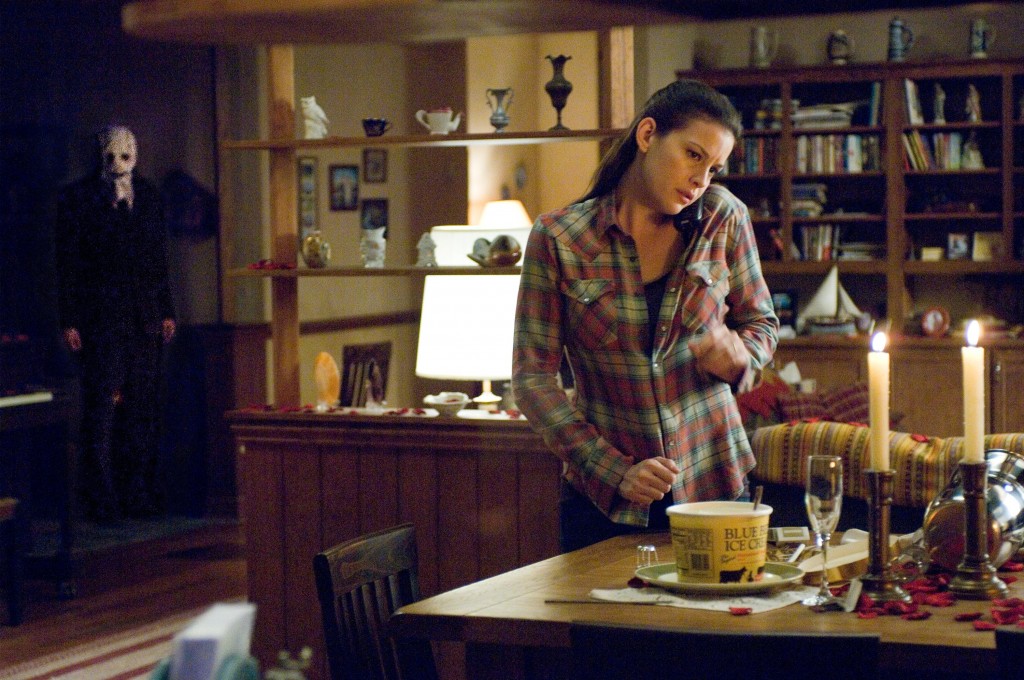 No wait, did I ask for pepperoni on that one?

A young couple, Kristen (Liv Tyler) and James (Scott Speedman) return to James’ parents summer home after a wedding, a fairly isolated house away from the main road. That evening, as they unwind and come to grips with an event that didn’t turn out the way James expected (I’m not gonna give it away, because it’s a great emotional hook to start the film), there comes a knock on the door. A young woman stands on their porch, asking to speak with someone we know to not be an occupant of the house. James and Kristen see her off, but it’s not too long before more knocking, banging and other creepy sounds start to emanate from the outside. Rapidly becoming more and more frightened, both James and Kristen soon learn that the crazy game of cat and mouse they’re having with their unknown tormentors is going to lead to several moments of self-awakening and terrifying fear. The premise of the film couldn’t be more simple: a young couple at home terrorised in the night by a trio of masked assailants, none of whom have any qualms about full body harm to their quarry. It’s a nightmarish scenario, and one supposedly prompted by a book on Charles Manson, if the director himself is to be believed. 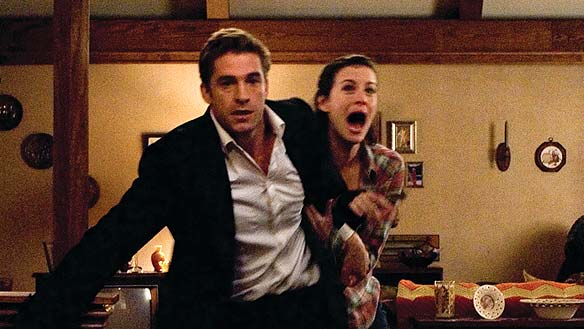 It’s easy to see why many critics scorned this film; the character development is pretty solid in the first act, but by the time the brutal finale comes around our leads have lost any conviction in their actions and the film does tend to slide slowly (but not completely) towards cliche and repetition. The script is a slow-burn piece from Bertino, with the setup in the opening twenty minutes or so a perfect calm before the inevitable storm, when everything our two main characters know and understand is thrown out the window. Standard scare-flick moments are included: the face at the window when the curtain is pulled back, the spine tingling tinkle of piano keys when the piano is inside the room, even the mistaken attack on a friend who comes to seek them out – it’s easy to see why some hardened critics may have scoffed at the merits of such an unrestrained cavalcade of cliche. But The Strangers is the very icon of restraint. This isn’t a busy film, or a film relying more on editorial jump-cuts than actual film-making craft: no,  it’s a deftly constructed, well put together genre entry with more going for it than some give it credit for. 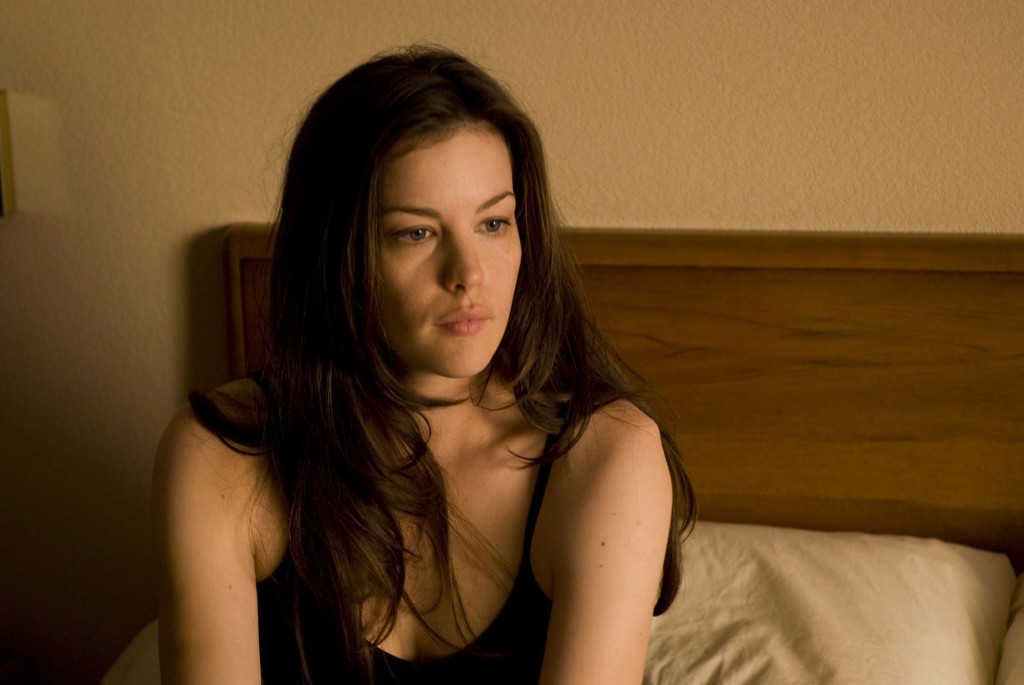 What many men often fantasize about.

Bertino has a sure hand behind the camera. His framing, his long pauses and holds on the main cast, particularly with the “he’s behind you” moments, is surely chilling, and goes against the modern grain of having about sixteen dozen different angles of the killer appearing, striking and then fleeing again. He’s prepared to let us appreciate the danger Kristen and James are in, and prepared to actually put thought into how he can rid himself of modern plot contrivances like mobile phones, communication and stuff you’d normally see in a thriller like this: characters do manage to have working phones in their possession, it’s just that they eventually lose them through the events of the evening, making rescue and help impossible. Bertino is content to let his cast do all the work, instead of relying on flashy Hollywood-style post-production gimmicks to keep the audience in suspense. It’s a simple, elegant horror/thriller in a gritty, noirish 70’s style that’s very effective. Considering this is Bertino’s first feature film (and, as far as I can tell, his first directorial stint ever – let me know if I’m wrong), I think the future is bright for him. He has a strong story-oriented vision, a very David Fincher-esque command of the cinematic form, and an ability to make us sit uneasy in our comfy seats watching a couple of people get scared shitless. 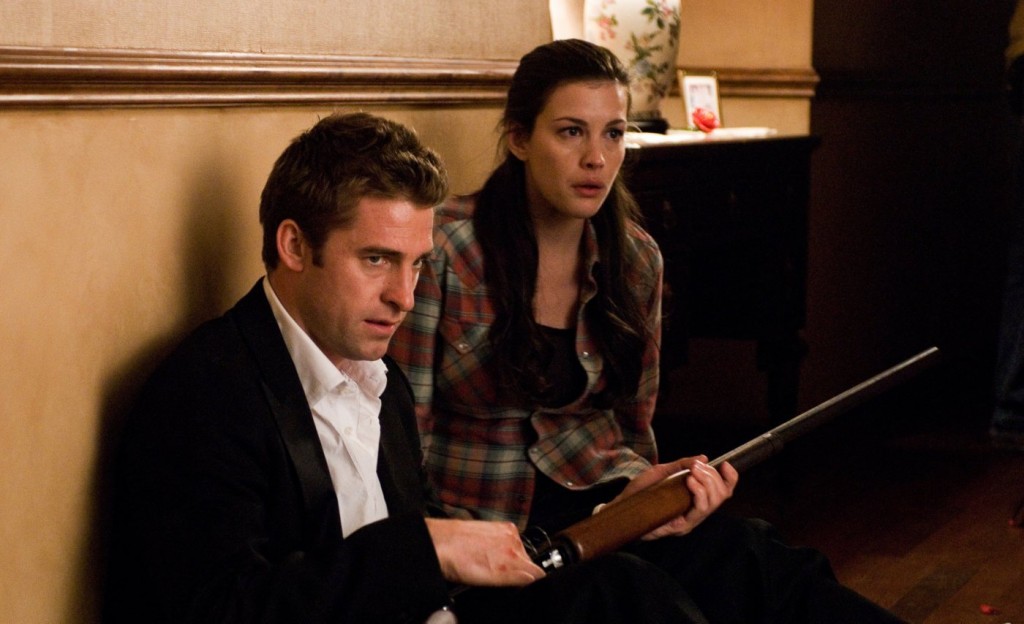 He wanted his crossbow, but the gun would have to do.

The cast, which comprises of Tyler and Speedman doing everything, since the rest of the cast consist of three folks with masks making scary noises (hardly a stretch), are uniformly excellent. Tyler and Speedman, the latter of whom I’ve only ever seen in those vampire movies with Kate Beckinsale, are both convincing as the beset-upon “heroes”, flawed people who aren’t heroic in any way, save that they desire to right to simply live. Their desperation as the night wears on, and as the stakes gradually rise, is palpable, and Tyler especially carries the bulk of the more maternal emotive content in a way that’s not idiotic – which is a surprise for a modern horror film. My cynical outlook on horror films is that the female usually bites it before the dude, mainly because she’s the one always screaming in these types of films: but Tyler isn’t about to go out like a bitch, she’s in this thing for the long haul, and performs well above the pay-grade this kind of project might normally allow. Speedman does okay as the Guy of the film, effectively transitioning from angry young man, to frightened young man, to caveman-protect-the-woman young man, to eventually terrified and powerless young man. It’s the gamut of emotions, all of which he portrays very well, that run his character, and I’m glad to see that while stepping into potential catastrophic cliche, Bertino and Speedman make James a real person first, movie character second. You believe these people existed, you root for them and are scared with them: you hope like hell they escape their torment. 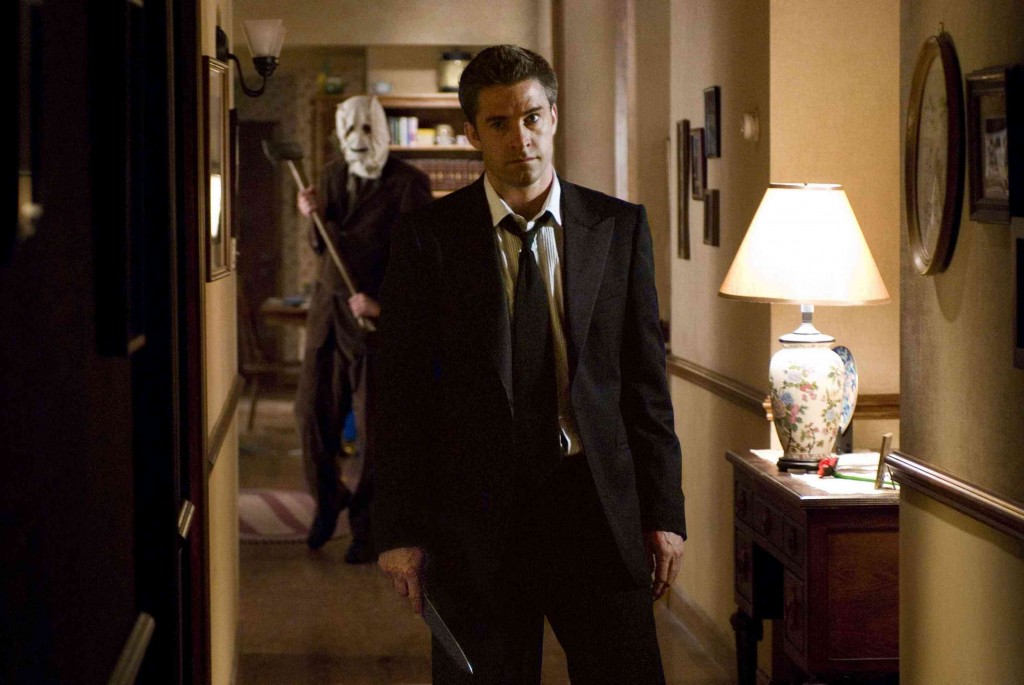 On the production side of things, the minimal score by Tomandandy is effectively creepy, and the cinematography from Peter Sova is a delight to behold. No washed-out monotone horror film here, folks. This film has plenty of colour, albeit in a sort of 70’s sepia tint that’s also effective. But the main production value I want to mention is the stunningly superior sound mix this film is afforded. As I mentioned above, it’s the sound of silence that’s most creepy, and the precise directional effects employed by the sound team on this film is both astute and chilling as hell. Footsteps, scraping, screeching and wailing all envelop you as you watch, echoing the discordant mindset of the films’ antagonists (none of whom are ever named on-screen) and creating a suffocating wall of silent terror as our main characters await their fate. It’s delicious, devious and utterly superb mixing, folks, and for a sound fiend like me, a film like this only serves to exemplify why surround sound is required for films these days. Done right, it’s another string to a directors bow. 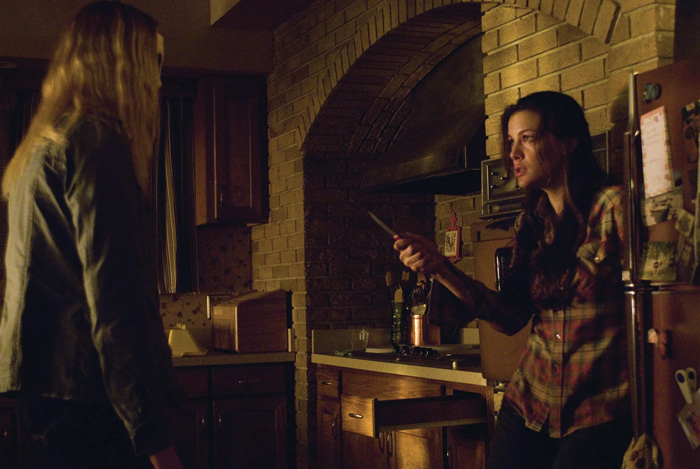 Get away from me you bitch!

If I have any problem at all with The Strangers, is that the ending feels a little forced. Now, I watched the unrated cut of this film on BluRay, so I can’t state whether the final scene I saw was in the original version, but the ending of the unrated cut in any case was a little bit of a let down – a let down by the standards of what’s come before. It’s almost like somebody at the office said “man, we can’t finish the film this way, let’s add on a brief moment giving the audience a glimmer of hope for the future” and the money men agreed. All the good work Bertino built up through the film, which leads to the brutal and savage finale, is somewhat undone by a cliched and almost slap-dash final “sting” pre-credit roll. The power of the films’ final act is assuaged by as feel-good an ending as you might expect when the rest of the film is about the torment of an innocent couple. I can’t say too much without spoiling the film, but for those who’ve seen it, you’ll probably agree – those who haven’t scared themselves by watching this film will agree once they have. This final moment of the film, I might admit, is hinted at (and alluded to) in an opening text card, which highlights the volume of violent crime in America… a statistic completely devoid of linkage to the events of this film. But the title card does effectively ruin the ending of the film – at least, it does when you’re thinking back on the film later. 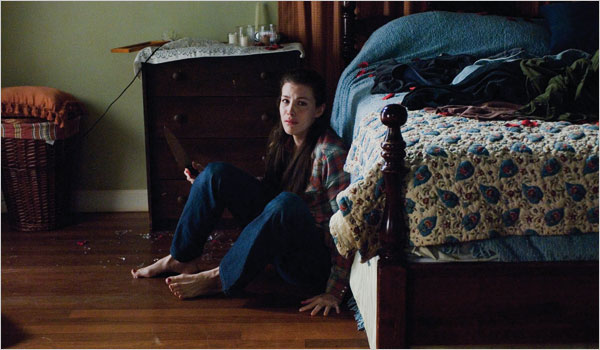 That said, The Strangers is a highly effective, surprisingly chilling encounter with terror; the kind of terror that could be waiting right outside your window right now, come to think of it. It’s a film that haunted me for ages, I will admit, the kind of film you sometimes wish you hadn’t seen so you don’t think about it while waiting to go to sleep at night. The ultimate terror trip, the unknown faces and reasoning behind brutality and the sense of innocence and promise lost to pure evil is, when put onto the screen like this, one of the most effective forms of horror in cinema. Personally, if I was Bertino, I’d be pretty damn impressed with myself at this point.