Director : Edgar Wright
Year Of Release :  2007
Principal Cast : Simon Pegg, Nick Frost, Timothy Dalton, Jim Broadbent, Bill Nighy, Paul Freeman, Edward Woodward, Martin Freeman, Stuart Wilson.
Approx Running Time : 120 Minutes
Synopsis: When super cop Nicholas Angel is reassigned from his city division to a small town out in the country, he’s initially unimpressed. But Sandford isn’t an ordinary town, and a series of grisly deaths (“accidents” as the local constabulary calls them) prick Angel’s interest, and he soon finds that there’s a lot more to the town and its inhabitants than meets the eye.
What we think : Gosh darn entertaining homage to action films, from Michael Bay’s Bad Boys II, to Point Break and everything in between, Edgar Wright’s direction of this film is absolutely spot on. A cinematic tour de force, a great laugh and genuinely entertaining action romp, Hot Fuzz ticks all the right boxes.

Have you ever fired two guns while flying through the air?

Have you ever fired one gun while flying through the air?

Here’s hoping that one day, we’ll all get to do so. Hot Fuzz, the second major feature directed by Edgar Wright and starring Simon Pegg and Nick Frost, blasts onto the screen with a rapid-fire one-two punch that never lets up. Hysterically funny, gob-smackingly action-packed (especially in its final reel) and directed with a keen eye for action-film parody, this film is a shining light amongst the dullard, dreary genre flicks released onto the mainstream every year. After the success of equally brilliant horror-film homage Shaun of The Dead, the trio of British film-makers returned to a specific genre and knocked it out of the park with this effort. Hot Fuzz manages to not only be an effective homage of other films, but a great film on its own merits. 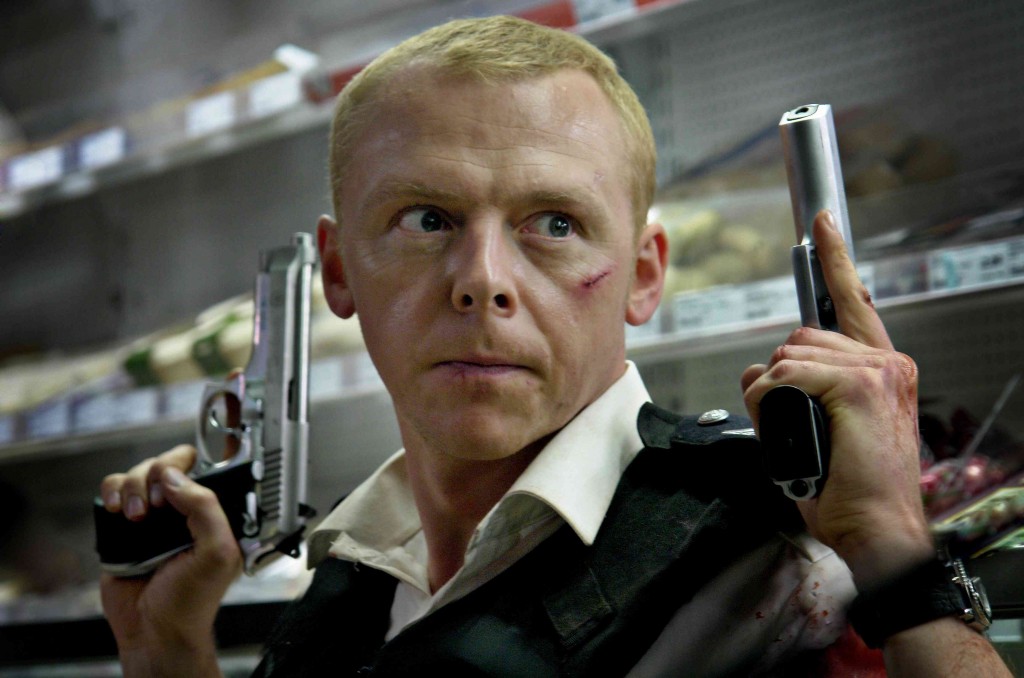 Hit the slo-mo any time, Edgar!

Nicholas Angel (Simon Pegg) is a cop with an impressive track record: so impressive is he that he’s making his fellow officers look bad. So, his bosses conspire to rid themselves of him, and send him to small town England to while away the time. Sandford, the pristine frontrunner in the country’s “Village of The Year” competition (having won the title numerous times), is a seemingly sleepy little rural community. Angel, who meets local officer (and son of the Police Chief) Danny Butterman (Nick Frost) soon becomes involved in relatively trivial police matters, such as locating a missing swan, and confiscating a cache of weapons (including an unexploded naval mine) from a local farmer. Yes, Sandford is a sleepy, yawn-inducing town by comparison to the hurly burly of the city. But when a series of supposedly accidental deaths begin to rock the town, from car crashes to houses exploding, Angel begins to uncover a sinister secret behind these events that will have him putting all his finely honed skills to the ultimate test. 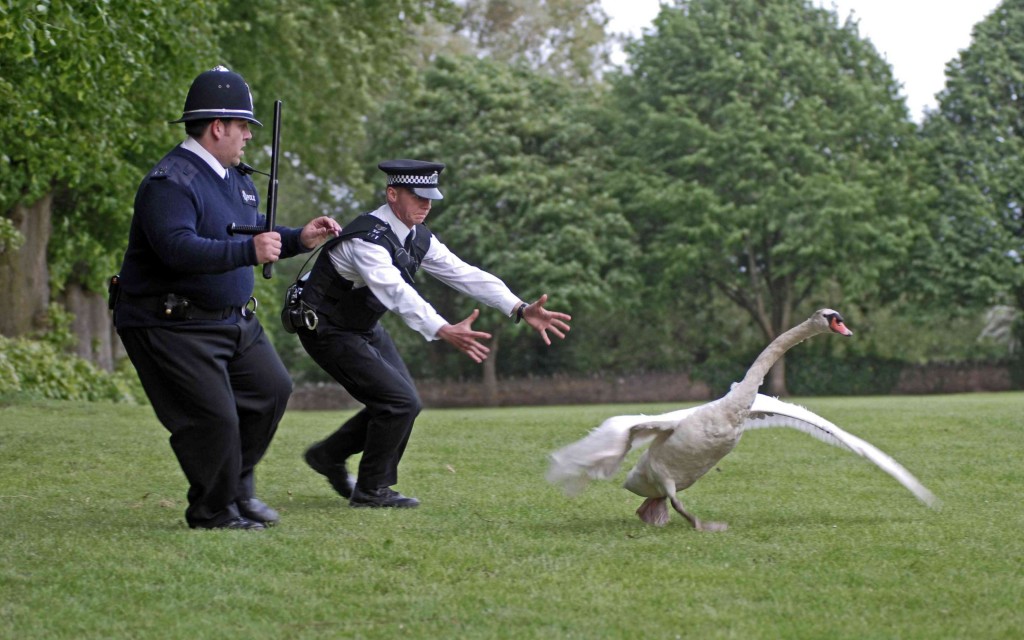 Catching your dinner was a bit of a chore…

This is one of those films that you don’t see coming. What begins as a fairly benign cop-comedy, soon becomes a splatter-action bullet-festival that doesn’t just bend your brain over in an intellectual gang-bang, but snaps your mind in half and commits all kinds of deviancy upon it. The film isn’t shy on violence either, the blood soaked final showdown between Angel and the townsfolk involved in an enormous conspiracy a wonderful pastiche of films like Pale Rider and Bad Boys II; epic gunfight showdowns that are used as inspiration for Wright’s own version, to wonderful effect. The film doesn’t strap on it’s fighting gloves until the final act, the finale, but when it does, it’s beautiful to watch. Prior to this, however, is a well constructed mystery/comedy, layers of clues and red herrings, some terrific action genre cliches, and a sense of tongue-in-cheek that’s impossible to resist. Director Edgar Wright, who has re-teamed with Pegg and Frost, emulates the slick, overproduced style of action films from Hollywood, the gargantuan camerawork and widescreen, epic production values  with aplomb, despite having a much lower budget with which to accomplish it all. His keen eye makes even the most stylish visualist from LA look positively second rate. 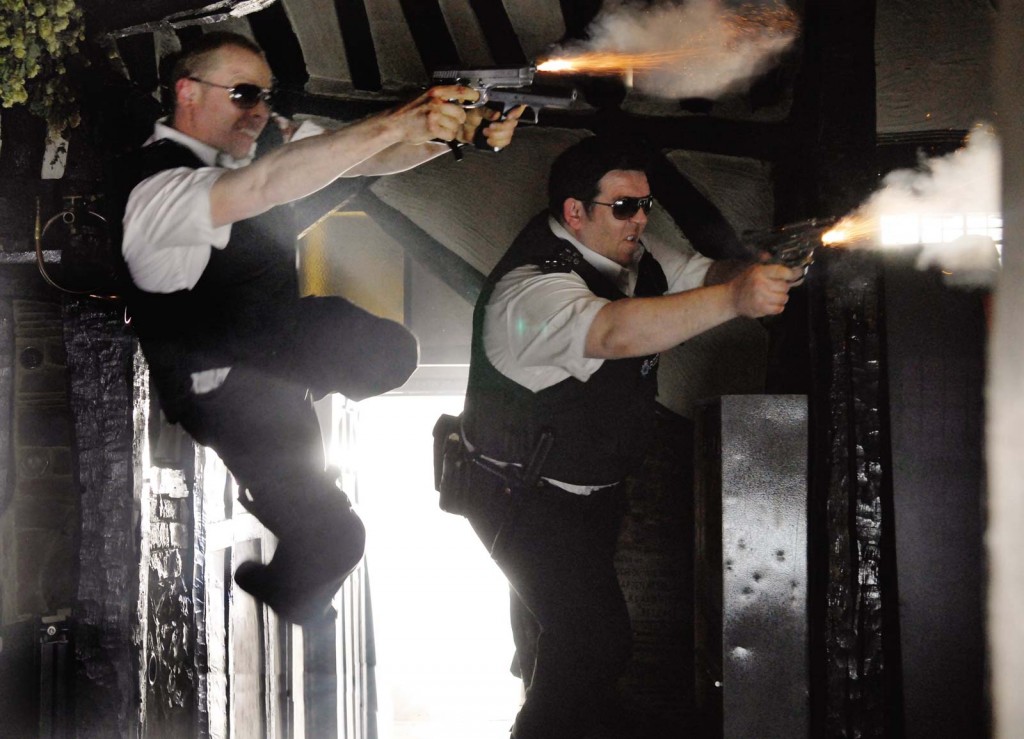 The film is essentially an homage-comedy, the humour of which is derived primarily from the screen chemistry of its two leads, Nick Frost and Simon Pegg. Pegg plays against type as the square-jawed action type, while Frost bumbles along as the somewhat dimwitted offsider with a penchant for action films and dreams of a better policing career. They are character archetypes of the most 1 dimensional form, given 3 dimensional life by two solid comedic actors; they understand the concept of the buddy film, and work it, man. Pegg, as the slightly arrogant and fuss-free overachiever, is always going to have a change of heart by the end of the film, softening his character when he undergoes an emotional catharsis. Frost, the massive underachiever of the film, is always going to become more heroic (or at least do something brave and out of character) by the end of the film, to give his character an arc and purpose befitting what is, essentially, a quintessential action film. The films villain remains hidden until the very end, or at least, until the final showdown, and what a showdown it is! 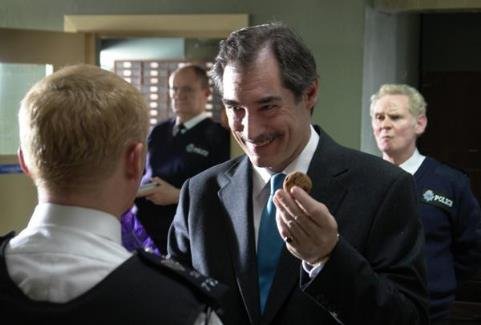 So I told them if they took my license to kill, I’d be very upset! Well, you should have seen his face…

The majority of the film is spent setting up the characters and the mystery, key plot elements designed to keep the audience guessing and the stars hopping. Wright saves the major part of the action for the gun-totin’ finale, but keeps the audience involved throughout the film with funny in-jokes and cultural references – Pegg and Frost spend an evening watching a slew of action classics, and the outcome is quite hilarious. Wrights editing on Hot Fuzz is ferocious, with jump-cuts and slam-zooms accompanied by a soundtrack filled with more audio cues than a Looney Tunes cartoon, whizzing and smashing though scene changes with the subtlety of a Mack truck. It’s all perfectly tongue-in-cheek, though, and if Hot Fuzz doesn’t bring a smile to your face simply for its overuse of cinematic conventions, you’re dead. 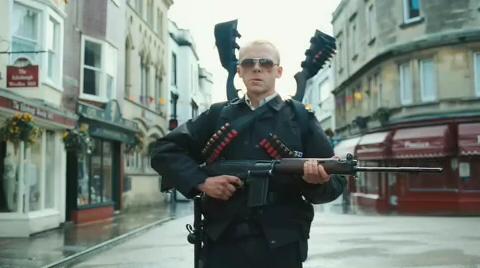 The right to bear arms….

But all the action cliches and upper-lip British sensibility in Hot Fuzz fade into the background when Nicholas Angel rides into town on the back of a white horse (a la Eastwood’s Pale Rider), bristling with weapons and an in-the-zone attitude for retribution. From then on, Hot Fuzz becomes an absolute corker of an action film in its own right, bullets and ricochets echoing across the soundtrack as Angel and Danny take on, and take down, the bad guys. Hot Fuzz is a dazzling infusion of energy and comedy with an action-film mentality, and the best of British scripting ensure that this film will become, and remain, a genuine cult classic.