One of the true delights of my day here at fernbyfilms.com is the arrival of a new BluRay disc. While I don’t normally do reviews on the discs my films come on, I thought a quick word or three about the recent acquisition of Moulin Rouge on BluRay was appropriate considering the quality on offer here. Regular readers would be aware that Moulin Rouge is one of my Top Ten films, alongside Armageddon and Transformers. I loved it when it was released in 2001, and saw it a number of times in the cinema, and was among the first to purchase it on DVD a few years later. I even managed to score a signiature from one of the films cast (Caroline O’Connor, who played Nini Legs In The Air – otherwise known as the Can Can Dancer who reveals Satine’s love for Christian as “The penniless writer… oops, I mean sitar player” – signed my copy of the DVD!) as proof of my love for the film.

The DVD version of Moulin Rouge was a pretty decent effort from Fox, when it came out back in 2001, with a gorgeous transfer of the film, and a treasure trove of extras on disc 2. The 5.1 dts mix was thunderous, although complaints came in from the Region 1 viewers who complained of synch problems – no such drama here in Australia. For the BluRay release, director Baz Luhrmann went back into the editing suite to oversee a new colour timing transfer of the film, tweaked slightly for the HD format. As well as a new colour grading, Luhrmann also paid attention to some production errors that crept into the film: in particular some camera wobble during a key shot in a major song. By using technology to iron out some 2001-era wrinkles, and tinkering with some of the colour and contrast, Luhrmann has managed to make Moulin Rouge look even better on BluRay than it did originally in the cinema.

The picture quality on Fox’s BluRay release is stunning; and that’s an understatement. Bold colours, superb black resolution and a sumptuous depth of field make this film look almost 3D in some places. The energetic opening Can Can sequence, the point at which many newbie viewers give up and go home, is a dazzling riot of motion and colour. The level of detail in the picture is amazing, from each rivet in Satine’s corsetry to the subtle blacks of Christian’s dinner suit, and there’s almost no visible digital artefacts to be seen. The image is razor sharp. The BluRay presents the film in the full-scope 2.40 ratio, rather than the overscanned 2.35 version on the accompanying DVD – casual viewers may not care about this, but the zealots (like me) will.

On the sound front, audiophiles will be in raptures over this BluRay – the dts-HD 5.1 mix truly does rock. And by rock, I mean it will punch you in the face with your own scrotum. Sonically astonishing, the channel separation, LFE and surround presentation is fantastic; to the point where even die-hard fans will feel that they’re hearing this film for the first time. Dialogue is never overblown or muddled with the gargantuan musical soundtrack, remaining clear and precise throughout. The thunderous musical numbers feel a little louder than required by comparison to the softer, dialogue-driven moments, but the same could be said of the original DVD release, which indicates how the film was mixed originally.

Where the BluRay set tends to fall over is with the accompanying special features. Not so much the what is included, but the how. The set released here has 3 discs, the second containing the bulk of extra material much of which has been ported across from the original DVD release. The first disc contains the HD version of the film, as well as a new commentary from Luhrmann and his associates, and some “from the vault” material in various featurettes. The third disc is a Digital Copy. The problem isn’t with what was or was not included, but rather with how they’ve chosen to present it. Each of the bonus featurettes and footage is displayed within a picture frame on a wall, resulting in the footage shown taking up about 1/4 of the screen, leaving the rest of the frame as static red proscenium with a “frame” around the moving material. I can understand why they chose to do this, because initially you think it looks cool, but since you can’t turn this style of viewing the material off, you are stuck with all this cool footage being displayed in eye-straining squintyvision. At least, I wasn’t able to find a menu selection to turn it off. Every bonus feature, from the trailers to the extra rehersal and test-screening footage, is displayed like this: for anyone with a sub-40″ screen, you’ll be shifting your chair closer to the screen to see what’s going on. Here’s a photo I took of what it looks like on the screen: 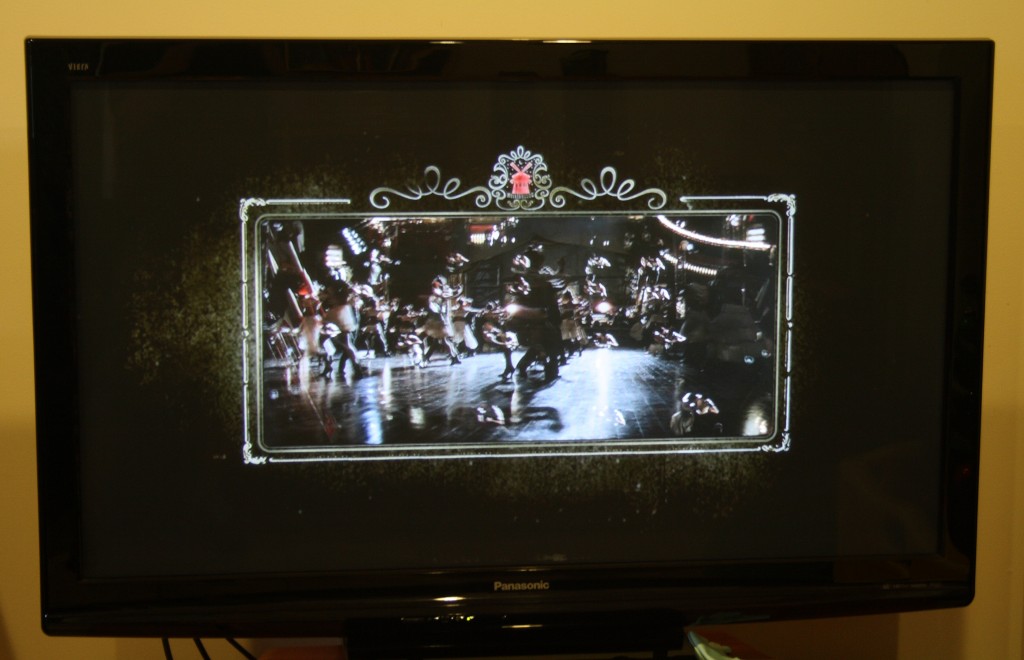 Note the fact the image is placed in the middle of the screen, with a large border around it.

Aside from this rather exceptional issue, there’s plenty to enjoy with the Moulin Rouge BluRay from Fox. Much of the bonus material is new from the Bazmark Vault, and is divided up into easy-to-find menus screens. The DVD disc is essentially the same as the version released back in 2001, featuring the older featurettes, while the majority of the new stuff is held on the BluRay disc.

So is the BluRay of Moulin Rouge worth a purchase? Fans of the film will have it already (it came out a few weeks ago) and to them, I need say no more, but those who’ve held off on it until the HD format embraced it, can now go ahead and be confident that the product they’ll get is technically superb. A subtle tweaking of the image quality, plus the new lossless dts track, and a bunch of new bonus features, make this release of Moulin Rouge most highly recommended. Because you can can can!!!

Movie Review – Wrath of The Titans