Movie Review – She’s Out Of My League

Director : Jim Field Smith
Year Of Release : 2010
Principal Cast : Jay Baruchel, Alice Eve, Krystin Ritter, TJ Miller, Nate Torrence, Mike Vogel, Lindsay Sloane, Trevor Eve
Approx Running Time : 110 Minutes
Synopsis: Airport worker Kirk Kettner has a pretty crappy life. His ex-girlfriend and her new boyfriend practically live at his parents place, his older brother is a douche, and his work friends seem content to remain nothings and nobodies. A chance encounter with Molly, a super-hot woman with no obvious physical or intellectual flaws, leads Kirk to begin dating her, all the while leaving him wondering how a loser like him has ended up with a total babe like her. Like the rest of us, I imagine. Societal mismatch hi-jinks ensue, as Kirk must justify to himself and his friends why he’s worthy of a girlfriend like Molly.
What we think : Cracker adult comedy with some gut-busting moments of absolute hilarity, I thought this film rocked. Jay Baruchel is perfect as the guy we all wish we weren’t, gaping in amazement as he starts dating a total hottie. The secondary characters add flavour to the mix (especially the crude-yet-hilarious TJ Miller) and give the film a much needed boost when things are flagging. A winner, and a film able to be watched by both guys and girls together.

It’s amazing to me that a film completed in 2008 took a further two years to find release theatrically. She’s Out Of My League is another of those socially hip, self-consciously aloof, decidedly adult, sex/fart/boob/scrotum joke films that seems to ooze out of Hollywood’s shady brown orifice these days, an all to common genre that’s rapidly depleting my appreciation for American humour. Except, in what can only be described as a cosmic shift in the order of things, the kind of event Star Trek avoids every second Stardate, League is actually a pretty funny movie. Reliant as always on the straight man lead/crass-but-amusing sidekick formula, She’s Out Of My League redefines the “awkward social encounter” and elevates it to a new height. Thanks to winning performances from it’s two central leads, and the comedy repartee of TJ Miller (and to a lesser extent, Nate Torrence), this film is not only a really funny, contemporary adult comedy, but a worthwhile date film if you’re so inclined. 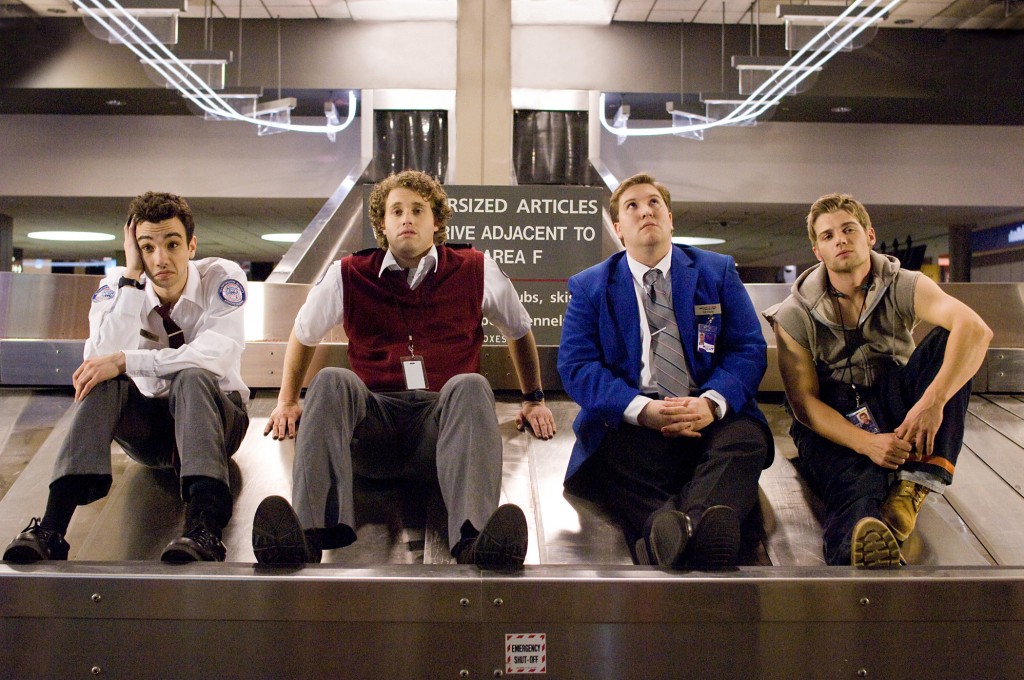 Yo, guys! This’d be much more fun if we turned it on!

Kirk Kettner (Jay Baruchel) is, and let’s face it, a loser. Kirk works as a low-grade airport security drone, with no prospects for promotion or way to improve himself. His ex-girlfriend, a complete bitch called Marnie, lives with his parents and her new boyfriend, and Kirk’s older brother is a selfish, belligerent wanker whose pregnant girlfriend is also something of a skank. Inexplicably, Kirk still has a candle for Marnie, even though she treats him like dirt. Kirk’s work friends are also a group of losers; Stainer (TJ Miller, best known as Hud the “cameraman” from Cloverfield), Devon (Nate Torrence) and Jack (Mike Vogel). So when Molly (Alice Eve), a “hard 10” hottie, accidentally leaves her phone in Kirk’s security area, leading to him having to return it to her, they begin to date. Which is surprising to Kirk, who considers Molly an unattainable dream woman, somebody akin to Ray Romano bagging Angelina Jolie. As usual, though, the course of true love never runs smoothly in the movies, and while Kirk tries to keep impressing Molly and her parents, his life becomes more complicated. One of Molly’s hunky ex-boyfriends comes back on the scene, intending to win Molly back, and Molly’s sarcastic best friend Patty (Krystin Ritter) isn’t being very helpful either.

She’s Out Of My League is a story very similar to Notting Hill, in that an attractive, well-off woman who would normally have no reason to associate with a more middle-class member of society suddenly finds herself in a relationship with one. Unlike that Hugh Grant/Julia Roberts classic, though, League dwells less on the fantasy and more on the reality of that scenario: where Hugh Grant’s friends in the film were amazed but supportive, in this film they’re mainly sitting around waiting for it all to come crashing down around them, blithely offering tacit support while keenly observing Kirk’s inadequacy with the ladies. It’s the American Pie version of Notting Hill, a warm centre covered with some delightfully cringe-worthy moments of bodily-inadequate gags and scrotum shaving hilarity. Literally. 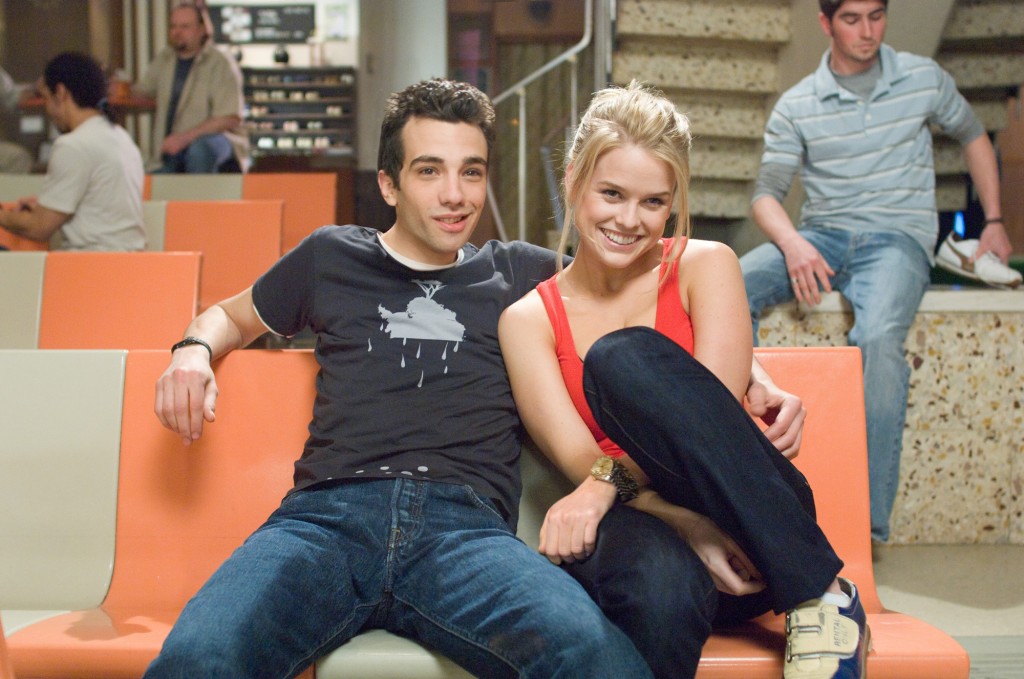 If her hand moves closer to my groin, I’m gonna explode!!

Having grown increasingly despondent over the current state of American comedy, to wit the byproduct of which is films like The Hangover, Are We There Yet and Scary F’ing Movie, where the humour is delivered with the panache of a skydiving piano and the subtlety of root canal surgery, I was reserved in my expectations for this film. I fully expected to either sit there in dumbfounded silence as a bunch of no-hoper filmmakers tried to scrounge a laugh out of the audience by having somebody in the film have a body part super-glued to an animal, or rapturous guffawing as, amazingly, the film became actually funny. While I can’t admit to having a gut-busting time watching this film, it wasn’t the worst film I’ve seen either – not by a long way. There were genuine moments of hilarity, such as the scene in which Kirk attempts to make himself more physically appealing by manscaping his…. region… if you know what I mean. Men cringe, but it was funny. Thankfully, though, we’re spared the traditional gamut of gross body gags, the obligatory fat woman, gay amputee, hairy sexually promiscuous animal routines that seem to have become the norm in most adult comedy films produced by Hollywood these days. Instead, it’s more an awkward social experiment type of comedy, a play on the Cyrano de Bergerac story, where the dude with no reason to attract a hot woman suddenly does. 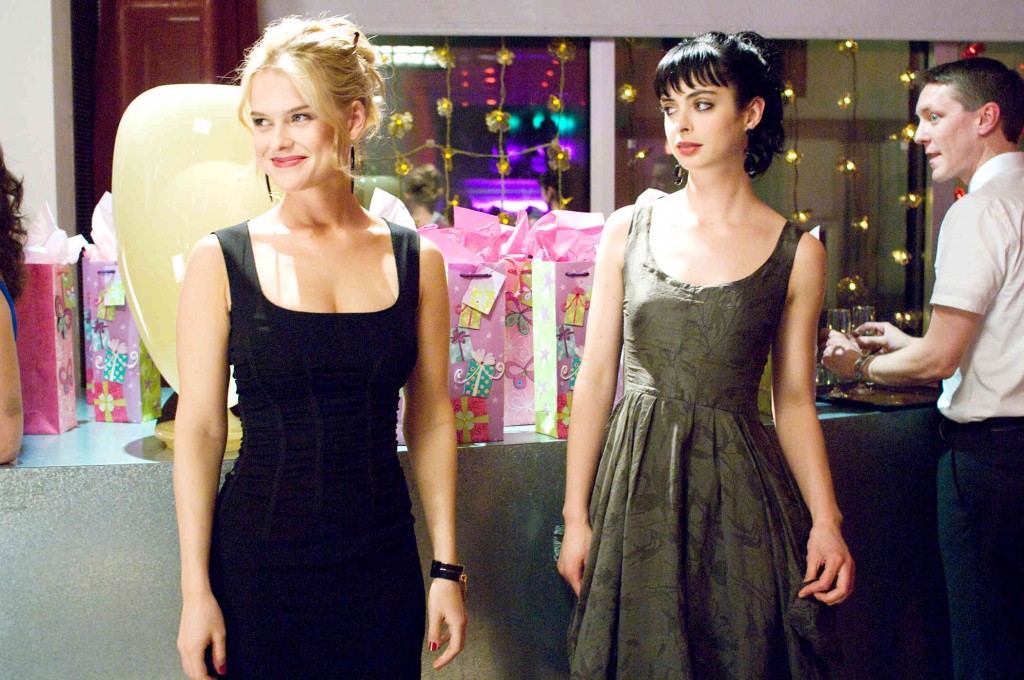 Nice dress, now, look over there!!!

The cast are uniformly good, with leads Jay Baruchel and Alice Eve having a great on-screen chemistry. Baruchel doesn’t make Kirk a complete imbecile, simply a product of his upbringing and position in life, with a tinge of yearning for something better – although his reluctance to take that step into something better seems at odds with his character, a scripting problem I think undoes some of the good work early in the film. Baruchel seems to channel Woody Allen a lot of the time, fumbling his way through each situation with the verbal delicacy of a Tourettes stutterer. Alice Eve comes off a little like a younger Reese Witherspoon, so much so I thought it was Reese at first, before checking the credits for who it actually was. She’s gorgeous and sexy, but in a girl-next-door kinda way, not the slutty big boobed bikini model they usually use. The good thing about this film is that the unattainable girl isn’t actually that unattainable – the script gives her a vulnerability and an accessibility that isn’t completely insurmountable to the average Joe, just improbable. Eve is gorgeous, but not out of the realm of possibility. 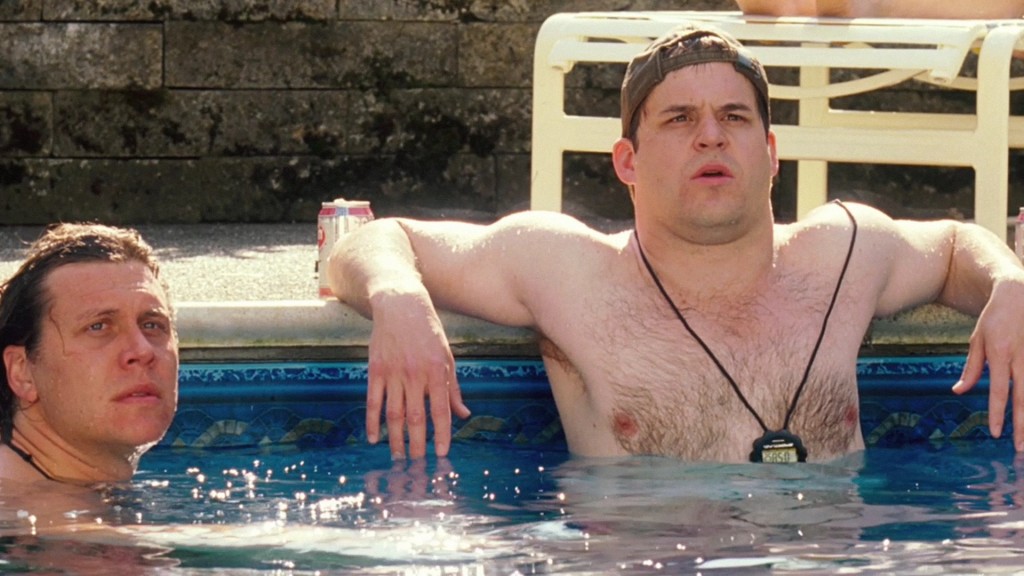 You don’t wanna know what my hands are doing, dude.

As far as the supporting cast goes, TJ Miller gets the lions share of laughs, as “best friend” Stainer, the wisecracking wise-ass who’s own personal journey reflects the disappointment of Kirks, although he’s ably supported by Nate Torrance as Devon, the  “sensitive” one out of the group who happens to be the only (un)happily married one of the bunch. Just what Mike Vogel is doing in this film is beyond me, since his character appears to have been overlooked completely for any kind of arc – he’s just another face to look at, and doesn’t even get many lines. I spotted a little bit of work in the deleted scenes, but overall, he’s hardly in the film at all. Look fast to spot Alice Eve’s real life father playing her fictional one, Trevor Eve, from the British TV series Waking The Dead. 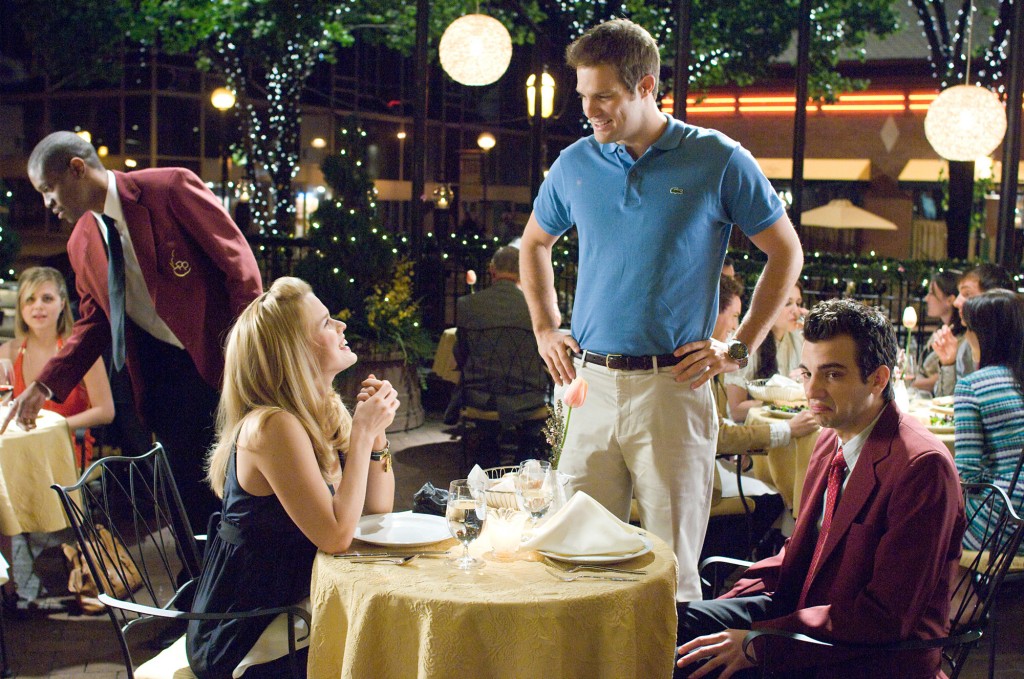 A film like this is never going to be highly original, at least not to people who watch a lot of films. The plot and characters don’t feel as fresh and new as you might expect, and the genre cliche’s do tend to rear up every so often (the main character’s parents are both clueless and stupid, the main characters friends give lots of wisdom that is never any good, etc etc..) but it’s all fairly harmless. Thankfully the main plot is funny enough to overcome the minor deficiencies the film has, so in the end you are entertained. Just how much will depend on your tolerance for the obligatory sarcastic humour now so familiar to us, but She’s Out Of My League is a better film than the trailers and posters might suggest. It’s funny, warm-hearted and has just enough memorable moments to rank as a keeper down the track.