Director : David R Ellis
Year Of Release : 2009
Principal Cast : Bobby Campo, Shantel VanSanten, Nick Zano, Haley Webb, Mykelti Williamson, Krista Allen.
Approx Running Time : 90 Minutes
Synopsis: Death stalks a group of attractive young folk after they survive a horrifying speedway accident. Various depictions of catastrophic death ensue. Not much logic though.
What we think : Stylish, polished “finale” of the Final Destination franchise, filmed in 3D (but watched in non-headachey 2D by your reviewer), with plenty of high impact death sequences and body eviscerations. Imagine a world where film-makers spent more time trying to understand the human condition than they did inventing ways of killing folks, and we’d probably have a better world. Film does what it says though, and if you can stomach the horrifyingly grisly deaths in this film then you’re doing okay. For everyone else, this is complete rubbish.

Ahh, I remember Final Destination. The original film, which cleverly used the “death is chasing me” plot device to kill off various teen characters who survive a horrific plane explosion, was not a bad little genre piece. If you get a chance, it’s worth a look. The sequel, FD2, was more of the same, just with a bigger budget and more elaborate special effects (and worth a watch if only for the truly jaw-dropping freeway car/truck/bus/bike smash at the beginning) but less soul. The third entry I have not seen. This version, the fourth in the saga, involves even more high impact body dismemberment and digital bloodwork than all the Rambo movies put together. Okay, perhaps not THAT much, but it’s a fairly high count by my estimation. Gore-hounds will lap up every frame of this slickly produced but completely vacuous film, which delights in predominantly displaying all the gory kills the script calls for. 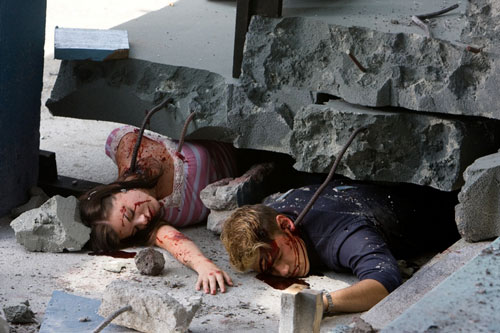 After having a premonition about a spectacular speedway racetrack crash, which kills his friends and other crowd members, Nick (Bobby Campo) frantically escapes the tragedy by panicking half the crowd. After they all realise that they’ve cheated certain death by only moments, you’d think they’d all be happy: no, they’re sad. Boo hoo. And, as with previous instalments in the Final Destination franchise, our main characters are once again desperate to stay one step ahead of death catching up with them. It’s like a template of the previous three films, just with better visuals and sound editing. Exciting eh? Only this time, you can even watch it in 3D. That’s right, watch people being hacked, chopped and sliced to bits in glorious HD 3D. 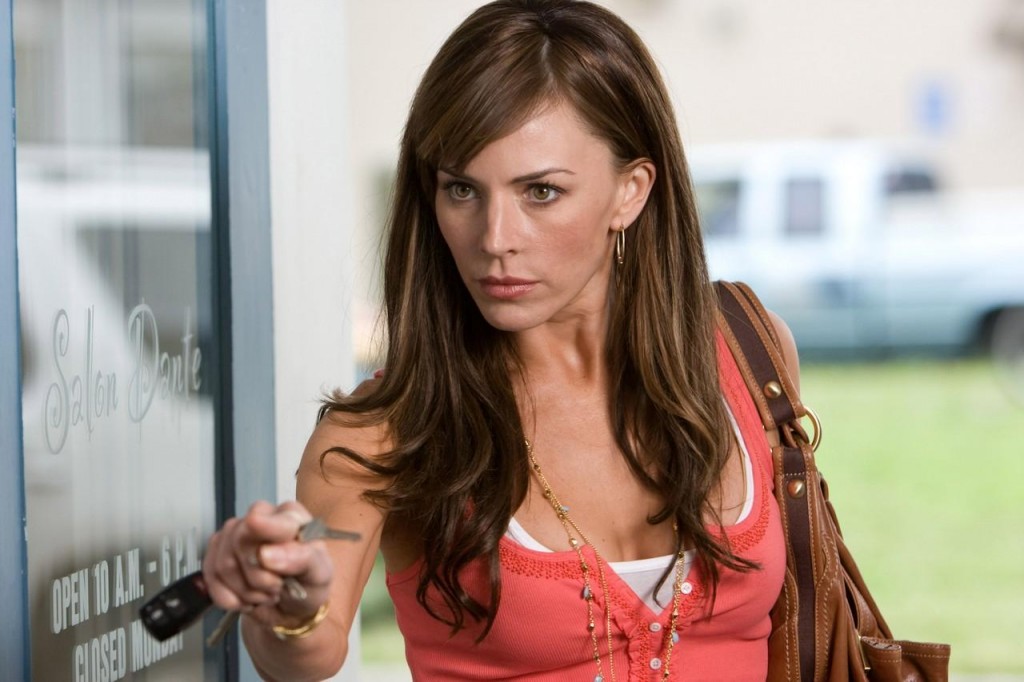 Don’t stare at my dead body when I die, okay?

Director David R Ellis, who helmed the first sequel of this series (as well as genre entries Snakes On A Plane and Cellular), returns to wreak more havoc on the lives of a couple of innocent teenagers. Hot girls and hunky guys aside, this film follows the same plot structure that made the other three films so successful; which I guess is as good a reason as any not to deviate from the formula. The problem is, everybody now knows what the formula is, and it’s smelling a little stale. While the constant threat of impending doom is so obviously forecast by the woefully underdone script (scribed by fellow FD2 scripter Eric Bress, the film tries valiantly to impress upon the viewer just how important it is to.. oh too late… if you’ve got this far you’re too far gone to save. The Final Destination is an abomination of film horror: it makes Eli Roth look like Alfred bloody Hitchcock. As one review I read stated, this film is pure “death porn”, and they’re right. Special effects and dreadfully B-grade acting (what the hell was Mykelti Williamson thinking appearing in this dreck?) can’t overcome what is, essentially, a reason to see people die. There’s no other motivation for this story, and for those who perceive this kind of film as entertaining, you’re really scraping the barrel. One guy gets sucked through a pool pump, ass first! Another character becomes burley via the inner workings of a store escalator. And the motivation for this, the reason for all this happening? Not quite sure, but it’s got something to do with being in the wrong place at the wrong time. 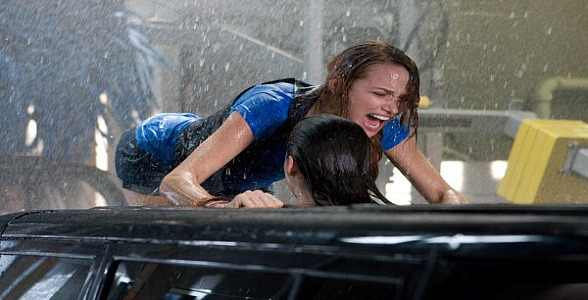 The problem with horror films (if this can be classified as a horror film) is that often, the narrative lacks emotional heart or even basic human logic. The Final Destination lacks everything required for a decent film to be entertaining. Characters lack development, the focus is less on them than on the grisly death sequences, and as an audience, you’re left wondering why you even bothered by the end. Perfunctory at times, drawn out to the excruciating at others, The Final Destination is a far cry from the wry wit and clever twists of the original. Heck, even the sequel had a bit going for it. Here, it’s just shock after shock after shock, and none of it is very shocking. Which is a problem for a film designed to be so. Phones never work (you guys in the USA must hate your telcos, surely!) and frustrating “magical” events (machines find ways of turning on, a can of hairspray slides across a table for no reason other than the film-makers desire of it to do so and advance the story) keep the death rate high; it’s the kind of low-rent film style that frustrates me as a viewer. 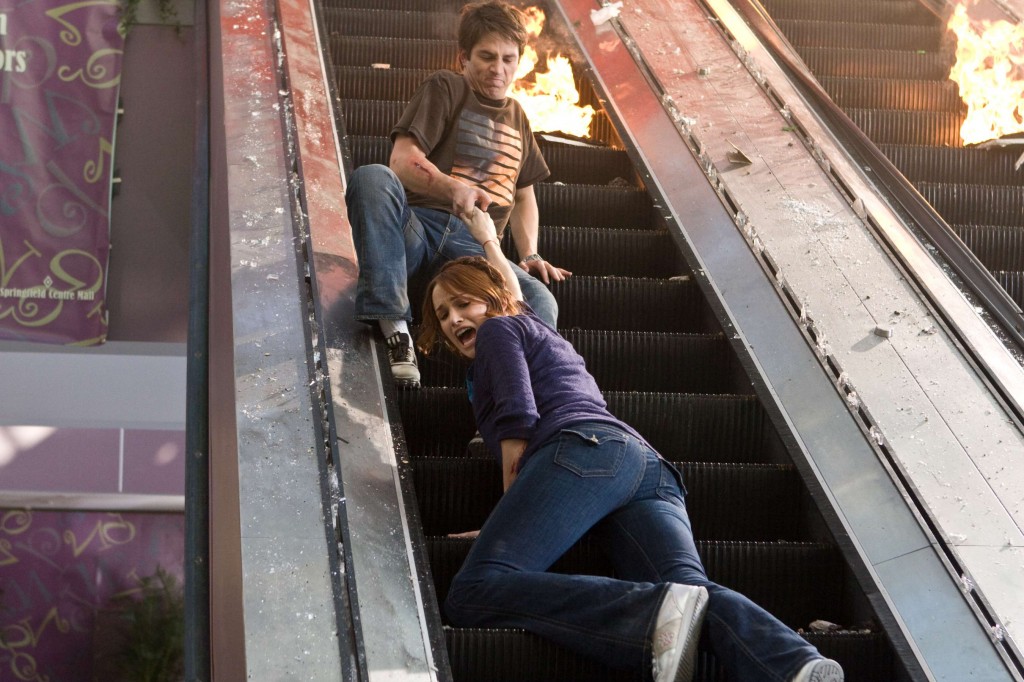 This escalator makes these people dead.

The obligatory cast of young nubiles seems hell bent on eviscerating the script of its potential for dramatic action, a mixture of soap opera acting and horrified gurning as one by one they’re all turned into bloody paste. Nobody here, not even the normally reliable Williamson, can generate any characterisation beyond the 2 dimensional, and for a film most often viewed in 3D, this is a blatant crime against the viewer. Lead actor Bobby Campo, who looks a cross between the entire male cast of Starship Troopers, has the devils own time trying to elevate his stock character beyond a simple cypher for the narrative: he’s the one who figures it out, and runs around like a headless chicken trying to “beat” death before more people die, but we don’t care about him. There’s no reason to! Co-stars Shantel VanSanten, Nick Zano and Haley Webb do little but stare off-camera at something they know not what; VanSanten in particular is horrifying with her cold, dead eyes trying to look serious, instead coming off like she’s got a turd popping out all the time. The director’s stock in trade flash-bang kill shots, including the franchise tip-o-the-hat to the original whereby one character gets slammed by a speeding vehicle (in the original it’s a bus, in this one it’s an ambulance… you’d think those guys would at least know how to drive!) all make an appearance, and the lack of originality and suspense is cringe-inducing. Instead of trying to make a film that’s genuinely scary, or genuinely horrifying, like most of Hollywood these days the film-makers simply resort to gratuitous blood and gore, some snappy editing and an overabundance of second-grade CGI. 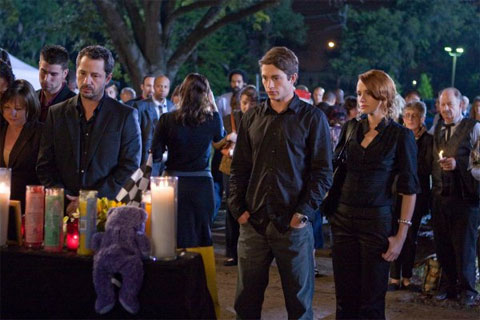 Staring at the remains of their careers…

It’s generic, sloppy muck, is The Final Destination. One can only hope that this truly is the final Destination – until one sees the release date for Final Destination 5 looming large like an oncoming train. It’s as if Hollywood is trying desperately to suck every breath from every franchise they have until it bleeds air: guys, I hate to say it, but the Destination franchise has finally been killed by a shite film. Any more is just grinding things into the dust. If you watch this film, don’t say I didn’t warn you.

A special mention to Al K Hall, from The Bar None, who managed to garner an interview with one of the young hot women in The Final Destination! Here’s a link to that interview… Enjoy!!