Director : Sylvester Stallone
Year Of Release : 2010
Principal Cast : Sylvester Stallone, Jason Statham, Jet Li, Terry Crews, Dolph Lundgren, Mickey Rourke, Eric Roberts, Steve Austin, Randy Couture, Bruce Willis, Arnold Schwarzenegger, Gary Daniels.
Approx Running Time : 100 Minutes
Synopsis: A bunch of mercenaries must save an Island dictatorship from destruction at the hands of a ruthless American businessman. At least, that’s what I think this film is about.
What we think : It’s hard to imagine a film more suited to destroying a first date, The Expendables is quite possibly the ultimate Man Movie. An absolute guilty pleasure, Stallone has directed a film everybody who grew up watching this cast in the 80’s and 90’s wants to see. Gargantuan, violent and as crowd pleasing a film as you’re ever likely to see, The Expendables is a blast. Literally.

There’s not too many filmmakers alive today who are perfectly suited to capturing the raw energy of those loose, action-packed films of the 80’s as Stallone; the decade of greed’s ilk such as Cobra, Commando, Rambo and Die Hard are all staples of any serious action film fan’s collection. The Expendables, a film starring almost all the great action stars of the last twenty years, is the zenith of blow-em-up, shoot-em-up, testosterone-fuelled, sweat-covered ball sack action films. With a plot and characters so deep you could fit them into an elevator, The Expendables is Stallones “thank-you” to film fans who’ve been sitting through Jackie Chan’s latest PG-turdfest while dying to see these guys in action once more. We’ve not had the guilty pleasure of seeing Stone Cold Steve Austin hulking over some hapless victim, Terry Crews doing his trademark wild-eyed slaughterhouse look or Dolph Lundgren pummelling it up for quite some time, and to see these guys all return for one massive shitstorm is, quite simply, awesome. Stallone’s thrown logic and character development to the wind, and given us exactly what this genre film is known for: bad guys being shot to crap, the rescue of some helpless female caught up in a gunfight, and twenty or so muscle-bound Mr Olympia rejects going toe-to-toe in a fight to the death. This film isn’t simply content to blow you away, it’s only content if it’s blown everything, including most cinema complexes, away. There are more explosions and shots fired in this film than in all the Rambo movies combined. Stallone has eschewed the PG rated stupidity of modern studio-bound film-making and given us a hardcore, graphic and brutal action film the likes of which most audiences haven’t seen in ages. Is The Expendables any good? Well, it depends on your point of view. 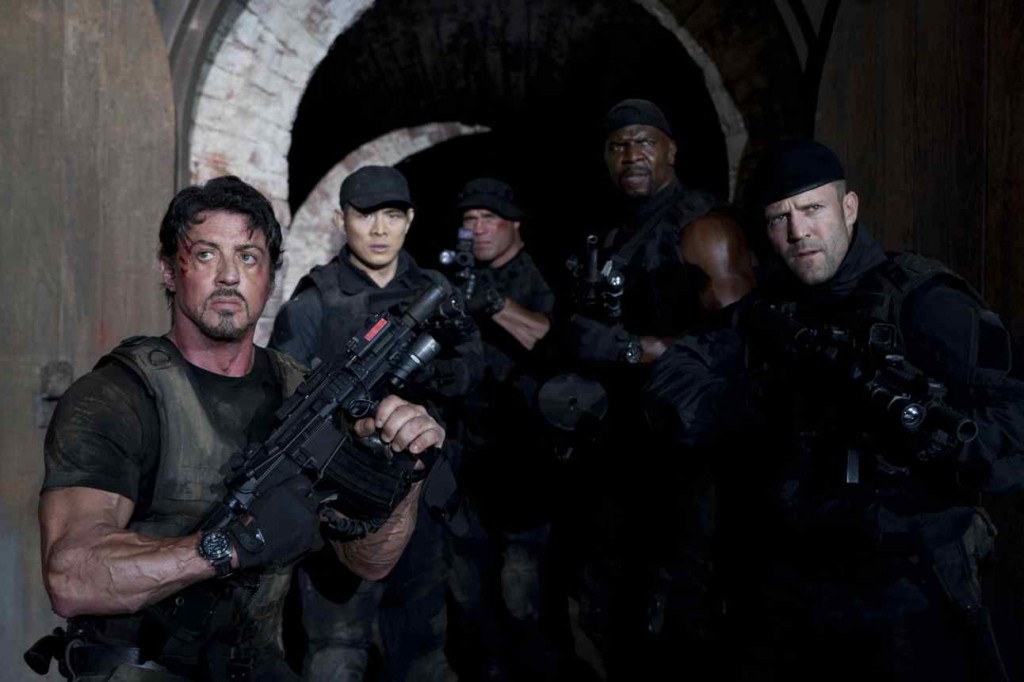 We’re all in this together…

A group of mercenaries, led by Barney Ross (Stallone) and his best friend Lee Christmas (Jason Statham, and no, I’m not making this up) are tasked to take down a dictator General on the small island of Vilena (it’s fictional, but that fact is irrelevant) and rid the island of a ruthless, power hungry American businessman, James Munroe (Eric Roberts, skunk-hairstyle and all!). In the group are martial arts expert Yin Yang (Jet Li), demolitions expert Toll Road (Randy Couture), and weapons specialist Hale Ceasar (Terry Crews). Munroe’s chief thug, Paine (really? That’s his name?) is played with relish by Steve Austin, former Pro Wrestler and and consummate showman. Throw in cameo appearances by Arnie and Bruce, two of the biggest names in action film (alongside Stallone himself), and you have a film set up to go bang in a big way. Look, by now you’ve read this paragraph and are beginning to wonder if what I’ve written is correct: yes, one of the characters is called “Hale Ceasar”, and no, it’s not an error. Understanding this film’s genre baggage is key to understanding why this script, and indeed the entire film, will make an absolute killing regardless of logical narrative and character development. It’s not so much that those facets of film-making are of little consequence in Stallone’s ultimate crowd-pleaser, it’s that they are of no consequence whatsoever, as long as stuff continues to blow up, collapse and explode, or bodies eviscerated in numerous quantities and methods so inventive you start to think if it’s actually a little immoral to watch and enjoy this film. 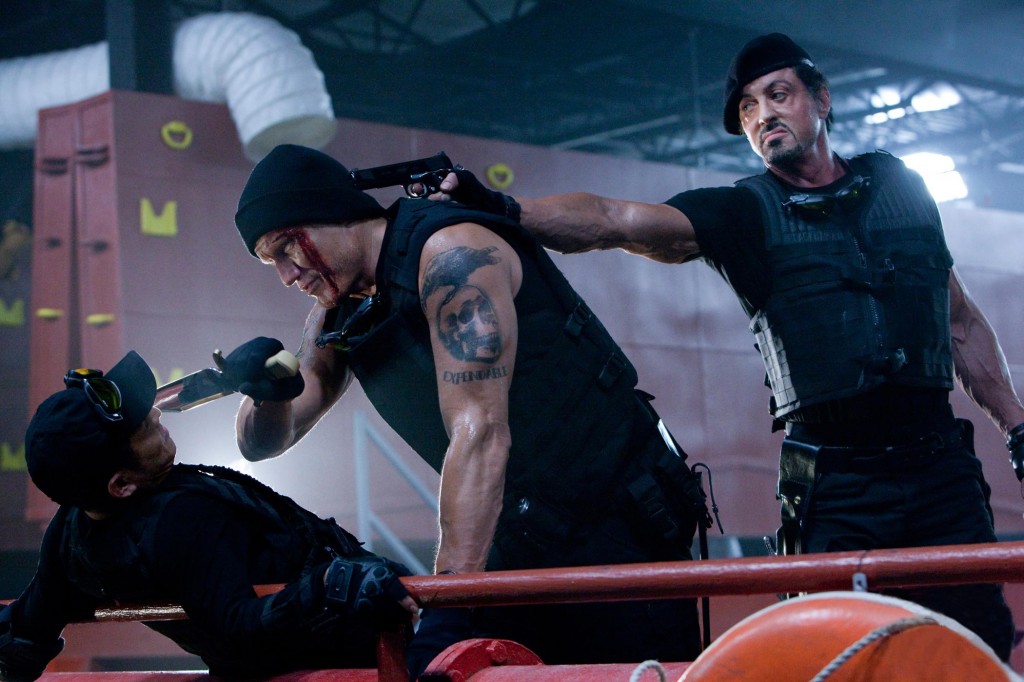 Every fibre of my movie-loving being screams out to hate this film. As a work of art, and by that I mean somebody spending millions of dollars to get it made and into cinemas, it’s low on the quality list. It’s a film that should be abhorred by every fundamentalist Christian, left wing, right wing, conservative, anti-violence do-gooder with a sticky nose and a penchant for trying to make the world a better place and therefore screwing it even further; The Expendables stands for everything trashy and awful in cinema. Clichéd, derivative, by it’s own definition lacking in ethics and morals, The Expendables is the best example of a film that shouldn’t be appreciated by sensible, free-thinking folks with children and a mortgage. 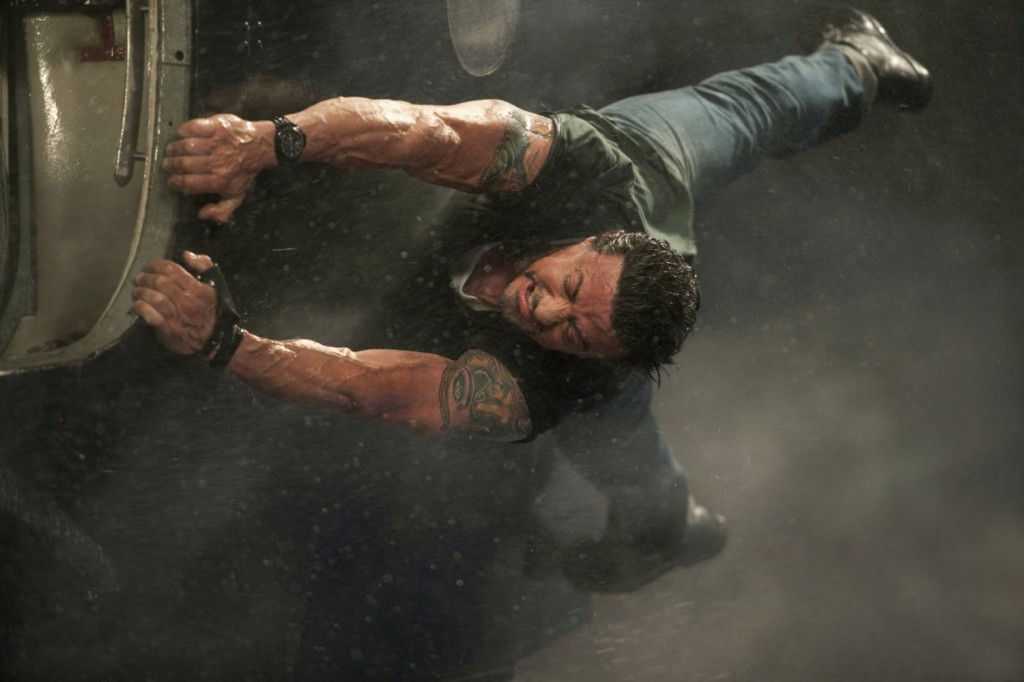 Not quite the same as Rambo, but close…

Screw that. This film kicks your ass and asks you if you like it. It’s like a testosterone injection delivered right into your eyeballs, an explosion of impossibly built guys, gargantuan guns and more explosive concussion than you’d find as a missile testing range. This film isn’t for “soft” people, people who drink skim latte and call it a friggin’ coffee. It’s for people who drink hard liquor, those who enjoy scotch and vodka and all the stuff that puts hair on every inch of your body. It’s a movie that will make your scrotum twitch in appreciation for the art of blowing shit up. This is a Man’s Movie, a movie made by men, for men, and when I say men, I mean the kind of men that live in solitary confinement in an island prison and eat scraps of human flesh as food. The Expendables is not a film for sissies: people who didn’t like Stallone’s recent Rambo update will absolutely loathe this film, and so they should. Those are the kinds of people who think The Notebook should have won an Oscar. The Expendables is a film which will never see Oscar come its way, and if it did, would melt Oscar down and turn it into a gold plated bullet just to shoot more bad guys. This is not a film to watch with your girlfriend, your mother, hell, even your Church prayer group… no, this is a film for men with hairy chests, muscle cars and tattoos. It’s the kind of film you’d watch at a Stag Night, have on in the background for those pussies not interested in the strippers. I’d hardly be surprised if The Expendables got a mention in the Book Of Revelation. 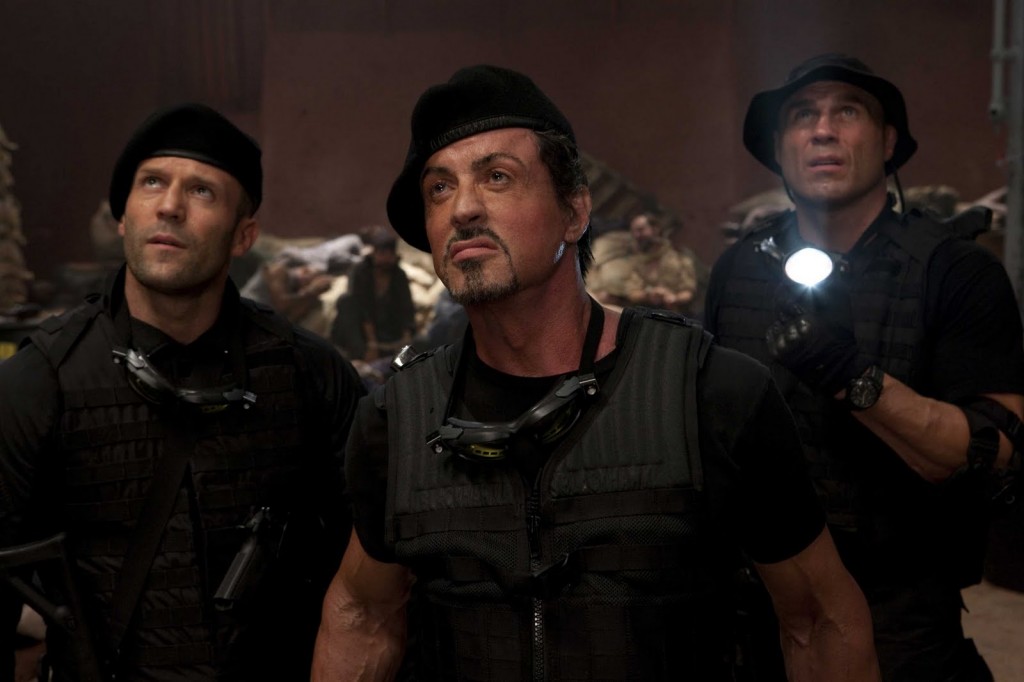 Dude, you have got to be kidding, right?

Those who find this kind of film disturbing need to drink a cup of cement and harden the hell up. If you don’t enjoy this film, you’re devoid of the ability to switch off your brain and just bathe in the glorious destruction Stallone and Co have cooked up. Everyone in this film looks like they had a blast filming it, and why not. The drool-worthy on-screen uniting of some of Hollywood’s Action A-Team (no pun intended, Liam Neeson!) over the last twenty years is a success in every way. While the story isn’t really why you’re watching The Expendables, it serves it purpose in getting all the major players into the action and blowing stuff up. Each cast member has their moment to shine, from Jet Li’s tete-a-tete with Dolph Lundgren, to Stallone and Austin going to knock-down mode, and even Terry Crews having some of the best moments late in the piece with one of the baddest weapons ever to grace the screen. Remember Jesse Ventura in Predator, and how he cut a swathe through the jungle with the Mini-Gun he carried? Terry Crews gets to do something similar, and in doing so redefines bloodbath for a new generation. Current star-of-the-moment Jason Statham has the bulk of the story-stuff with Stallone, but he does cut loose from time to time with significant effect. Eric Roberts chews the scenery with his usual panache, and Steve Austin is terrific as the thuggish right hand man who takes on all comers. Mickey Rourke, Arnie and Bruce Willis all have cameo appearances of indiscriminate quality, and Stallone makes the most of their time on screen. They may not mean much to the story overall, but it’s great to see them all together appreciating the fact that they’re all together. 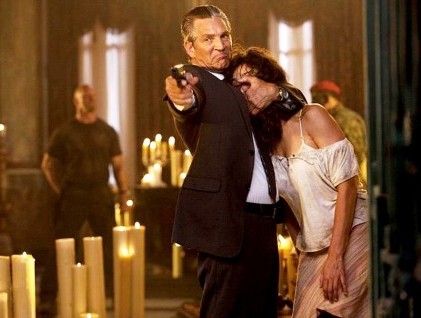 Man, I went up against Doctor Who and still came of better here….

If The Expendables lacks one thing, it’s subtlety. If you want a film where stuff blows up big and loud, it’s this one, hands down. This film roars at you like an out-of-control freight train, the gunfire, explosions and screech of car tyres and crunching metal surrounding you at almost every turn. As with the recent entry into the Rambo franchise, Stallone has not shied away from depicting violence and carnage in a realistic, if entirely cinematic, way. When a human body is shot by a gun, especially a large calibre weapon, from a distance, it’s not a neat, clean wound that fells a man; often, limbs and flesh are pulverised and disintegrated, and Stallone (rightly or wrongly) made the decision to show how brutal this kind of thing actually is. I’m not saying we should glorify the facts, but rather than the old Hollywood style of squibs and thrashing bodies falling off-frame, if you’re going to show a man blown in half by a shotgun round then show him blown in half and move on. Stallone’s directorial style isn’t filled with slo-motion twenty-minute shots, instead he opts for the Paul Greengrass mentality of showing an event and moving onwards, barely pausing to recognise what’s happened in all its graphic detail: Stallone has more action per second of film than all the Bourne films stitched together. It’s a frenetic, confusing and often baffling series of fights, brawls and shootouts, mostly in semi-lit darkness, with shadows and generic Bad Guys flailing about as they’re despatched with ease and skill by our heroes. Editor Ken Blackwell, along with cohort Paul Harb, have tried to make this film as brutally realistic as possible in what it shows, and how it flows, and I think they do a great job of getting the confusion and insanity of the events on screen into some sort of order. It might not make any sense realistically, but on screen in comes together well. Hell, even the soundtrack feels like it’s got muscles. Brian Tyler’s pounding score rips into you, a heroic and braggadocio elegance that perfectly replicates the feel and tone of an early James Horner, Jerry Goldsmith or Michael Kamen. It’s like somebody made a mould of how to write action film music, and Tyler simply poured in the backing beat.

I dare you to tell him his bike looks like crap.

I was deliriously impressed with this film, and will be adding it to the top of my Christmas Wish List on BluRay when the time comes. Anybody expecting Shakespeare, and then complaining when Stallone delivers one of the best Beer-and-Pizza flicks of the last decade, can go jump off a cliff. Brain off, eyes open, hands down the most entertainingly trashy film I’ve seen in ages. Michael Bay: you’ve been upstaged, man.