Movie Review – Up In The Air

While other aging stars have managed to destroy their careers by appearing in rubbish films (Harrison Ford) in recent years, Mr Clooney has somehow dodged this Hollywood debacle by choosing projects of quirky substance and less commercial appeal. He’s forged a career from kooky projects like O Brother Where Art Thou, The Men Who Stare At Goats, Good Night, Good Luck, and now, Up In The Air. By no means a mainstream film per se, Up In The Air is directed by the son of Hollywood royalty in Jason Reitman. Reitman’s famous father, Ivan Reitman, was responsible for directing films such as Ghostbusters and Kindergarten Cop, while Jason burst onto the scene with the acclaimed Thank You For Smoking, and then Juno. This pedigree, coupled with the backing of serious Hollywood talent, ensured that Jason got the best possible chance in the industry, and while many offspring fail to capitalise on their famous parental achievements, this time it’s worked out well. 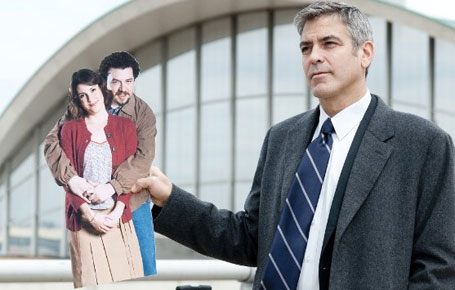 Man, I knew I shoulda switched my phone to silent…

Up In The Air sees George Clooney playing Ryan Bingham, a man who travels from city to city and gives people notice of redundancy for major corporations. He is comfortable in his work, which has him away from home (and family) for most of any given year, a fact which has alienated him from those who know him best. His sister, due to be married, has sent him an invitation to the wedding, although Ryan doesn’t feel the connection and pull to attend. The solitude and customer-friendly airport lifestyle is a captivating one to him, and the frequent flier miles he racks up affords him some luxuries, mainly at his company’s expense. So when upstart company newcomer Natalie Keener (Anna Kendrick) arrives with a new technological alternative to face-to-face sackings, it puts Ryans lifestyle in jeopardy. His boss makes Ryan take  Natalie around the country to show her exactly what he does and why he (and personal retrenchment) can’t be replaced by a computer screen. A side-plot involves another frequent flyer, female Ryan equivalent Alex (Vera Farmiga) hooking up with Ryan after chance meeting at an airport lounge.

I was keen to watch Up In The Air after seeing Kendrick (and Farmiga) being Oscar-nominated for her role in this film. I’d seen her in the abysmally underwritten Twilight franchise of films, and was interested to know if she was capable of more than what those films allowed. I’d not seen her in much else, truthfully. Clooney, of course, can always be counted upon to deliver the kind of performance that makes a film a winner, and his portrayal of Ryan Bingham is yet another success for him. His verbal sparring with Kendrick, in a delightfully witty (and poignant) script, is fun to watch. Perhaps Kendrick wasn’t ever going to be able to match Clooney blow for blow, but I tell you what, she gives it a good showing. Natalie isn’t the most emotionally accessible person, perhaps due to the more “persona” driven society we seem to be heading in, where your feelings aren’t as important as what you can do. She’s got a wall up, that’s for sure. While the gradual breakdown of this wall is interesting to watch, at no point does Kendrick’s performance feel forced; it’s genuine and natural without being clichéd. 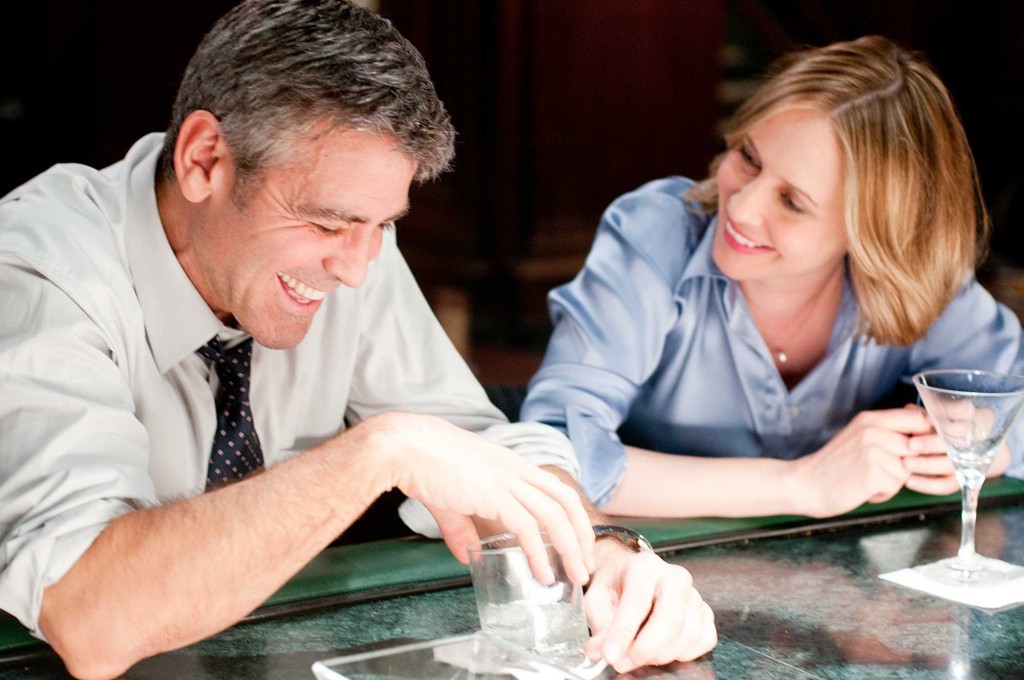 Lisa knew she’d soon have him under the table, or under her, whichever came first.

The other woman in Ryan Bingham’s life is Alex, whose lonely frequent-flyer-points lifestyle echoes Ryan’s own. They’re kindred spirits, of a sort, who engage in a promiscuous affair with no strings: until Ryan suddenly finds the need to connect drawing him closer to her and putting their relationship in jeopardy. Farmiga is charming as Alex, her mature wit a perfect counterpoint to the youthful arrogance of Natalie. It’s easy to like both women, although Alex is by far the most “normal” of the female roles in this film. Even Ryan’s sisters, played by Amy Morton (as Kara Bingham) and Two And A Half Men’s Melanie Lynskey (as bride-to-be Julie) are a little dysfunctional, although this is a perception we have due to Ryan’s disconnection to them. If he’s disconnected, then are we? Amy Morton does well with her small role, the linchpin of the family trying to bring harmony where there generally isn’t any: it’s a pivotal scene with Bingham, berating him for not being around, that catalyses Ryan into his spiral of self-doubt and need for connection.

Mention must be made of Reitman alum Jason Bateman, as Ryan’s boss Craig, for his understated, yet critical role of the man caught between his job and his friendship with Ryan. On one hand, he’s been told to implement the new firing strategy from his bosses, and on the other he can see how Ryan’s lifestyle suits his personality, and is sorry he must force the change. Bateman makes the most of what is, essentially, a 1 dimensional character and fleshes it out marginally into somebody we can relate to, if not like. Bateman’s career seems to be in good shape after plenty of critically acclaimed roles in films such as Hancock and The Kingdom, as well as the aforementioned Juno, and Mr Magorium’s Wonder Emporium. He’s solid here, and his screen chemistry with Clooney is wonderful to watch. 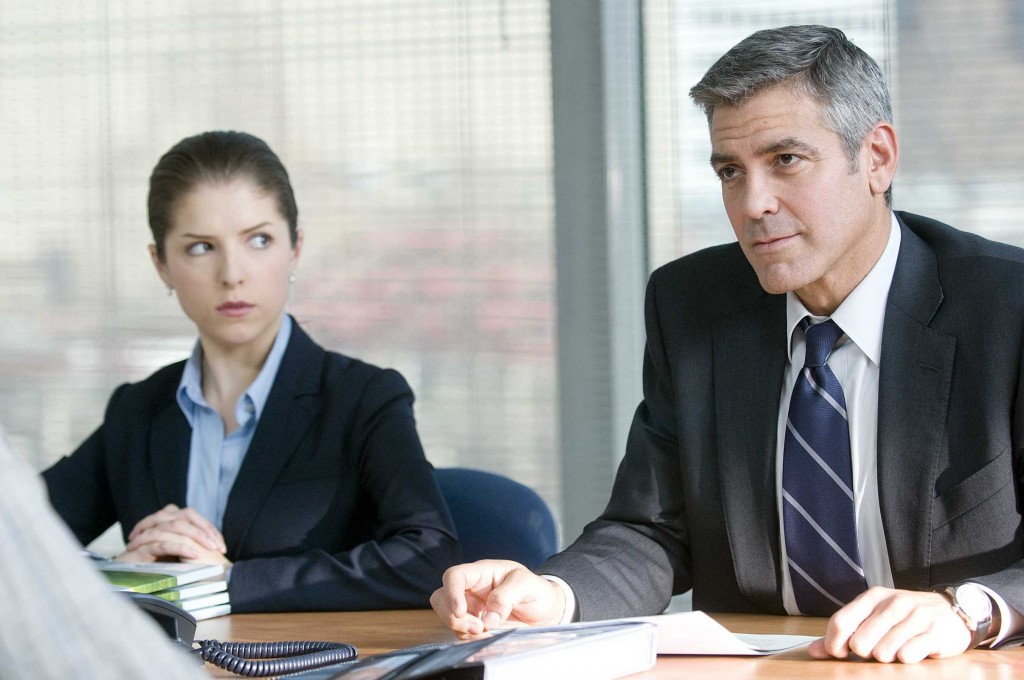 Belinda wasn’t afraid, although she was slightly concerned….

But the star of the show is undeniably George Clooney. His craggy looks aside, Clooney has developed a knack for appearing in roles that suit him: unlike many actors who take roles simply for the pay-check or the prestige. His CV isn’t filled with blockbusters or directorial magnum opuii, but his body of work is solidly entertaining, bounding from the kooky (O Brother Where Art Thou?) to the more serious (The Good German) to the traditional mainstream (Ocean’s 11, 12 and 13) with relative ease. His ability to morph into a character, coupled with an effortless screen charisma and natural charm (probably helped by his looks) make him one of the most bankable stars of today. Even his commercially limited projects, like Confessions Of A Dangerous Mind, Leatherheads, Syriana or even Good Night & Good Luck, are brilliantly entertaining and a showcase for his talents. If you’ve not dabbled in those films, I can recommend them to you wholeheartedly. Clooney makes Ryan Bingham seem normal, if flawed, as a man. His desperate search for loneliness and isolation, above everything from family ties to casual friendships, seems strange, but both Reitman and the script eventually have us sensing that although we ourselves may find it bizarre, it’s what he wants. The twitch in Bingham’s eye, the panic as he realizes his lifestyle may soon come to an end, the fatalistic finality of retrenching the nameless, faceless multitudes and his “told you so” ambivalence towards Natalie Keener’s upstart attitude, are all honed to perfection by an actor in tune with himself as a performer, and cinema as a language for the viewer. I could probably wax lyrical about Clooney’s performance here all day, but I wont. Clooney is a solid achiever, a man who’s able to construct a character and present it, for better or worse, in a convincing way to the audience. Once again, he’s done himself proud. 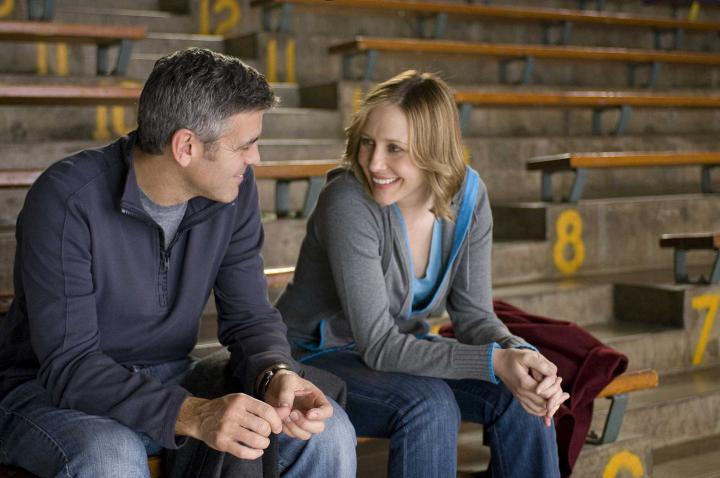 You sure are a purty little thang….

Reitman has layered his film with plenty of undercurrents of social taboos. The embarrassment of being sacked, both for the employee and his/her family, the sense of loss, the feelings of betrayal and abandonment, as well as the impending isolation from the workforce, are all given credence by the script and it’s willingness to attend to reality. The sense of isolation is all around, echoed by Bingham’s own journey through airport lounge after airport lounge. His reaction to achieving the seemingly un-achievable (I won’t spoil it) midway through the film is profoundly moving: Ryan can’t come to grips with the fact that after all this time anticipating his achievement, he’s unable to move past it as a focus for his life. This point, this achievement, is the turning point for him, and he is initially unwilling to acknowledge it. Loneliness often became wedged out of Bingham’s life due to this focus, and his work, but now that both are dissipating, he’s left with very little, and it’s sad. There are plenty of things the screenplay, by Reitman and Sheldon Turner (and based upon the novel by  Walter Kirn), says about our pre-packaged, press-button lives, the disconnect a lot of us have due to travel and the increasing demands on our time for work. The subtle hints at our (us, the audience) own social discontent, our own search for personal satisfaction and confusion amongst the helter-skelter of our daily lives, is an inviting and interesting point. Reitman makes no judgements on us, he doesn’t allow Ryan Bingham to become anything more than a vessel on whose journey we are taken, and outside of his own personal growth makes no commentary on society’s individualization of each person. Strange as it may seem, Ryan Bingham isn’t the personification of humanity as a whole (thankfully!) but rather, a reflection of society in modern times. The breakdown of family groups, the physical desire above the emotional: all resonate with viewers, and Reitman’s handling of such script details is indeed beautiful to watch. 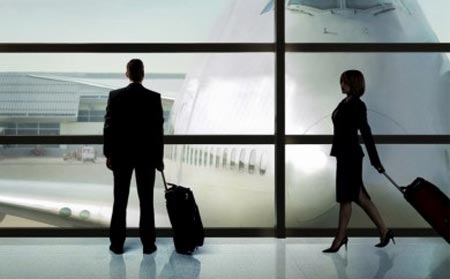 Up In The Air has a lot to say. It’s by no means a complex and conceited film, rather focusing on it’s individual characters as they try and find themselves, and each other, through the narrative. A great cast performing their roles with precision and understated complexity, Up In The Air is indeed a winner. Take the journey and prepare to be entertained. If not prodded.