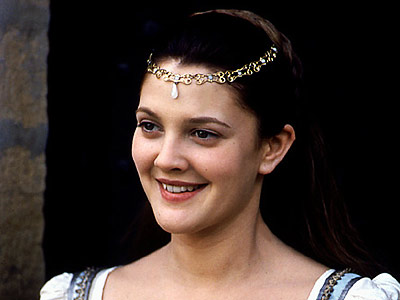 Ruined by over-watching, Ever After is a great film that slowly gets worse the more your flatmates girlfriend wants to watch it. There’s a story. And the rating of this film hinges on that story. So be prepared.

Many years ago, when I was living in an apartment with my brother and a friend, Nick, we were three single boys living footloose and fancy free. Nick, however, went and got himself a girlfriend (who shall henceforth be named Maude to protect her identity). Maude, bless her, was your typical girly-girl, a romcom loving princess who enjoyed a good chick flick. Maude would often be found, cuddled up with Nick on our couch, sitting back watching whatever romantic film she’d decided to watch out of my collection (which, I’ll admit, wasn’t as enormous back then as it is now). As an avid DVD collector, I’d usually purchase whatever film was released on disc in that particular week: I wasn’t really choosy, I did enjoy the (at the time) new format with my home cinema. So it came to pass that I purchased a copy of Fox’s Ever After, and it was picked up by Maude in her musings at some stage. Maude, being the girly-girl she was, enjoyed Ever After a lot. A whole lot. In fact, she enjoyed it so much it was the only DVD in my collection she wanted to watch. Ever. Often, I’d come home from a hard days work, to find Nick and Maude cuddling on the couch, Ever After playing on the big screen, usually about half and hour in. Now, this didn’t happen once every month or so, no sir. This occurred almost every second day. For a year. Imagine, watching Ever After four or five times a week for 12 months.

It’s the cinematic equivalent of loving chocolate, then one day eating too much and getting sick, and never being able to eat it again. I am unable, through natural mental gag reflex, to watch Ever After again.

That doesn’t stop me from being able to write a review on it. I can recite the film practically word-for-word, a talent I also have for Armageddon and Starship Troopers. So, after being requested, here is my review of Ever After, a great film ruined by over-exposure.

The most enduring memory I have of Ever After is Richard O’Brien’s slimy, creepy landowner who purchases leading lady Drew Barrymore (as the “Cinderella” character, Danielle de Bergerac) as payment of a debt. O’Brien, best known as Riff Raff in the film version of The Rocky Horror Picture Show, chews through his scenes with abandon, although his evil-ness is overshadowed in this film by the wonderful Angelica Houston. Houston, playing the “wicked stepmother” role of Baroness Rodmilla de Ghent, is perfect in her part, her angled face and harsh features capturing the malevolent arrogance and bigotry the character requires.

Ever After is set in Ye Olden Day France, when the Grimm  Brothers visit the reigning queen of France, who proceeds to relate to them the “true” Cinderella story, since their own version is somewhat lacking in detail and accuracy. We flash back to even Older Olden Day France, where a young Danielle de Bergerac watches as her widower father dies whilst leaving on a trip, leaving her alone with her newly acquired stepfamily, the cruel and vain Rodmilla de Ghent and her two daughters, Marguerite and Jacqueline. In the years that follow, Baroness Rodmilla proceeds to squander the family fortune on nice clothes and jewellery, whilst Danielle becomes a de facto servant girl, trying desperately to keep her family together in the face of severe adversity.

Drew Barrymore makes a delightful Cinderella, as Danielle, whose optimistic outlook on life captures the attention (and heart) of local royal Prince Charming, Henry (Dougray Scott). Naturally, the cruel stepmother decides that the fledgling romance between the Prince and Danielle will not stand, and promptly has Danielle removed to the slave0like employ of farming neighbour O’Brien. In true fairy-tale style, though, Danielle overcomes the repression to gain the love of the Prince. The Prince has his own problems, namely, pressure from his father to marry the daughter of the King of Spain, to provide a strong alliance in his war with England. An arranged marriage isn’t exactly a chick puller, and Henry’s reluctance to tie himself down only obfuscates the matter.

Ever After is a wonderfully romantic retelling of the Cinderella fable, complete with glass slippers and various tweaks of the well known story. Director Andy Tennant, who would go on to helm Hitch and Sweet Home Alabama, among others, utilizes his cast and the wonderful French locations to their best advantage. Barrymore’s natural charm and beauty shine in this film, as she effortlessly glides through a script in which she’s given the best possible leading lady lines. Scott, as her romantic lead, is great too, a far cry from his diabolically overblown villain role in Mission Impossible II. But by far the biggest light in Ever After is Angelica Houston as the evil, horrible Rodmilla de Ghent. She’s a nasty piece of work, and Houston plays it as straight as possible. Venomous, almost entirely beyond redemption, selfish and full of misplaced pride, Rodmilla is the catalyst and motivator for all that transpires; Houston gives her a depth that is often lacking in other retellings of this myth. Most “Wicked Stepmothers” are simply wicked because the story demands it; here Houston manages to generate some empathy with her portrayal of Rodmilla, something which only serves to bring her inherent wickedness into sharper focus. Danielle’s elder stepsister, Marguerite (Megan Dodds) is far and away the nastiest of them all, however. Dodds does the uppity pre-Bratz skank better than most, her cruel affinity with her mother making the duo a force to be reckoned with, even if she’s not to bright. The younger of the two stepsisters, Jacqueline (a very funny Melanie Lynskey, whom most will recognise as Rose from TV sitcom Two and A Half Men) is a kindred soul to Danielle, often helping her when things become too rough. The problem for Jacqueline is that she’s caught between loyalty to her mother and sister, and her own moral centre in being a nice person.

The film even throws in Leonardo DaVinci (who doesn’t look at all like he gives a rats bum about any codes!) and some revisionist historical twiddling, a sly wink to the audience as the pieces and players all fall into place. Tennant brings a warmth to the story, a kind of medieval glow that lifts the often violent (or violently themed) narrative out of a Monty Python sketch and into a mainstream romantic drama. There’s moments of comedy, played upon particularly by the ancillary characters like DaVinci (a wonderfully befuddled Patrick Godfrey) and some sequences that will wring the tears out later in the film (Walter Sparrow’s reunion with his wife is particularly touching), all elements that will endear this movie to it’s vast female target audience.

I was once asked if this version of the classic Cinderella story is any better or worse than the more renowned Disney version, made years earlier in the 50’s. Truth be told, I’d say both were of equal value cinematically, if only for Ever After to be more grounded in a realism Disney never captured. I think Disney’s version enhanced the whimsy and fantastical moments of the story (even if they were embellished substantially), whereas Tennants film devotes its themes to a more adult, gritty nature. That’s not to say that Ever After is a gritty film, it’s just that it’s emotional core is of a more adult nature. This isn’t a kids film, by any stretch. Both Disney’s Cinderella and Tennant’s Ever After can exist quite peacefully together, safe in the knowledge that whilst both films tell the same story, the modern retelling relies less on talking mice and glass pumpkin-based carriages, and more on a deeper emotional investment on it’s audience.

I did vow at one point never to watch Ever After again, after Maude and Nick decided to part ways. That vow became a little shaky after I was married back in 2005. My wife Lisa wanted to watch it, but never did with me in the room because of the stigma I’d attached to it. Upon reflection, I can admit that while I still find it hard to watch Ever After without getting that “Eaten too much chocolate” feeling in the pit of my intellect, the film remains as good today as the first time I saw it in the cinema. Ever After is a wonderful, sublime piece of storytelling, with great characters and a central theme that people simply get hooked on. If you’re after a laugh-a-minute romantic comedy, go watch something else. This is romantic, but it’s not an overt comedy. It’ll make you want to cuddle something soft.

As a closet romantic, and somebody who is simply incapable of watching this film objectively, I cannot recommend this film any higher than that.

15 thoughts on “Movie Review – Ever After: A Cinderella Story”