Review : Defining moment in the life of Natalie Portman, with what is quite simply one of the best child actress performances ever captured on film. Stunning cast performances keep this film brimming with tension, thrilling action, and some of the best assassin-action ever staged. Jean Reno is perfect, and Gary Oldman matches him step for step. Underlying themes are universal, even if buried under an avalanche of bullets, blood, and overtly sensual violence. Never has killing looked so sexy.

Stunning, sexy, violent, brilliant cinematic classic from French director Luc Besson, with a startlingly mature debut performance from Natalie Portman (who could have believed she was ever so young?), Léon: The Professional is one of those films that never leaves you after you watch it. Filled with dynamic, tour-de-force style and bravura acting performances, The Professional manages to lift the seemingly pulpish material above it’s origins and propel it into cult classic status. Luc Besson has crafted a story which, with it’s dark, violent characters, seems to be mired in an initial inherent masochism, yet manages to become slightly ebullient, almost joyous and not without redeeming features. The underlying sadness is negated by a feeling of inherent vengeance fulfilled. 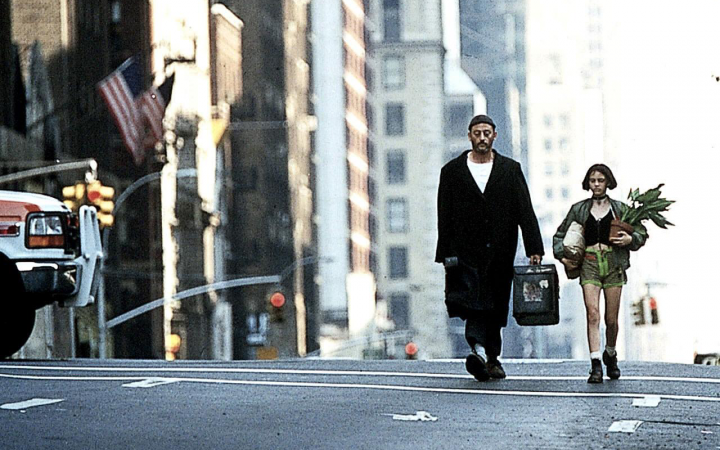 The Professional sees a young girl orphaned by corrupt DEA cops when they storm her apartment and murder her entire family, including her four year old brother. The girl, Mathilda (Natalie Portman) has recent befriended a strange man known as Léon, a professional hitman by trade (even if she doesn’t know this at first) and he lives in an apartment a few doors down. Coming home to find the DEA all over her home, Mathilda seeks refuge in Léon’s apartment, something the silent, seemingly desperately lonely figure doesn’t initially want; yet, something about Mathilda draw him to her plight, and the two quickly find a connection with each other. Their main cause for concern in chief DEA officer, Norman Stansfield (Gary Oldman), a man afflicted by addiction to drugs and a penchant for wanton violence and murder. Stansfield murders Mathilda’s father, stepmother, stepsister and brother just to extract information from her father about the decreasing value of his supplied drugs. When he discovers that Mathilda has gone missing, and isn’t wrapped up in a body bag, he seeks her out, which eventually leads to his confrontation with protector Léon.

The story’s main dynamic is the friendship between a man of violence, Léon, and the young girl who he protects. Mathilda, seeking revenge against the DEA for her family’s murder, offers to help Léon in his… “cleaning”, that is, his hits. Léon, seeing in Mathilda a child broken by life’s hardships, and sensing that perhaps his guidance would be more appropriate than letting her go out guns blazing with no training at all, begins to train the young girl in weaponry and assassination, whilst also putting her to work in his apartment cleaning and washing his clothes. After all, a delinquent child needs boundaries, and this is, in a sense, what Léon offers. Boundaries and a purpose in life, even if that purpose is killing people. A fair portion of the film’s subtler, more sensitive scenes, have Portman and Reno interacting, and the way Besson films these moments is key to the heart of the whole film. 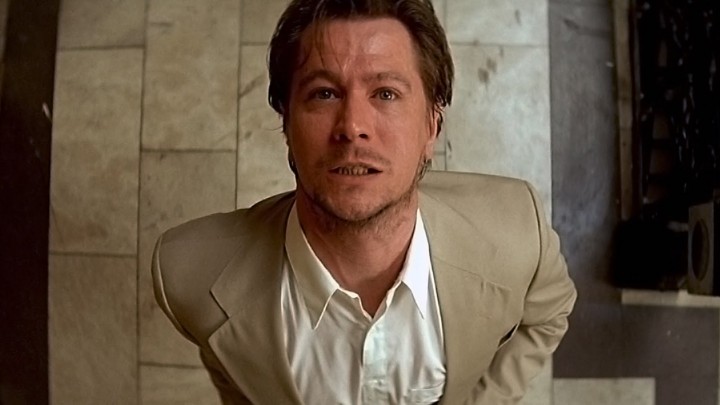 The connection between Mathilda and Léon is the soul of this film, and I think both actors nail it. Portman is a revelation, a stunningly mature portrayal of a girl whose life is stolen from her by an abusive father, a warped sense of the law, and a desolation in her emotional well-being that’s almost heartbreaking to watch. Léon initially doesn’t want to take Mathilda into his life, after all, the life of a hitman is not exactly great parenting material fro a young girl. And he works alone, apparently. His handler, Tony (Danny Aiello) seems reluctant to see  his best hitman being emotionally encumbered with Mathilda, although he understands that Léon is his own man and has to do what he has to do. Léon himself, in a telling scene, almost kills Mathilda in her sleep to prevent himself feeling attached to her. He doesn’t need her, he doesn’t want her in his life, and yet, for all her foibles and his own emotional constipation, he finds himself growing ever more fond of her. Jean Reno gives Léon a sorrowful melancholy feel to the character: Léon is a true recluse, a silent, brooding thoughtful man, gentle in nature yet forced, perhaps through circumstance, into a profession he is good at yet somehow, doesn’t enjoy.

Gary Oldman steals ever single scene he’s in as Stansfield, barking his way through the film as the insane, out-of-control agent, frightening all and sundry without a care in the world. He’s truly a frightening visage, a man bereft of anything resembling compassion or emotion: Stansfield is cruel, sadistic, and utterly incapable of forgiveness, love or even rational thought. He’s a crafty, scary man, and in this film, perhaps the only one capable of beating Léon at his own game. Where Léon is a calm, rational hitman, Stansfield is utterly opposite in a position of power, something that makes him even more dangerous. Oldman, doing his best “crazed lunatic” shtick, does what he does best: upstages every single person in the same scene as him, his intense performance again highlighting just how cool and actor the man really is. While his performance borders of schizophrenic, and perhaps even wildly uneven, I again say that without his type of character in the film, Léon would never be truly tested. Where Léon is a poetic, almost sublime form of death, Stansfield is like a blunt force trauma. And as the opening scene will attest, Léon is a hitman who is “serious”. While Léon and Stansfield never really go head-to-head in any one scene, their final one together is truly memorable.

Besson’s staging of scenes is brilliantly realized, assured and calm. His camera seems to be everywhere, the widescreen framing perfectly capturing the dissonant violence in the initial raid on Mathilda’s apartment, Léon’s bravura take-down of a drug-lord’s henchmen in the opening sequence, and the final, balls-out explosive thrill ride that is the DEA attack on Léon’s own apartment. There’s a sensuality, a kind of repressed sexualization of the scenes, especially wherever Portman is involved; it’s like watching Lolita unaware that you are watching Lolita. The film delights in tantalizing us with an undercurrent of sexual tension, something we should be horrified at considering that one of the parties involved is twelve. The extreme close-ups, the long pauses and fragile, furtive glances between a forthright Mathilda and a pensive, uncomfortable Léon, are superbly realized. When Mathilda suggests Léon become her lover, there is a moment where you get the strangest sensation of perversion: the film elicits such emotion, such a sense of protection fro Mathilda, you are dragged into her story with Leon so well you don’t even know it. and that’s the power of this film: for all it’s violence and brutality, the heart of the story is a pure, father/daughter love which, in one of the film’s most heartbreaking scenes, is realized in full. Léon, his apartment surrounded, his only escape certain death, shoves Mathilda into a laundry chute to escape. In a moment of pure emotional catharsis, Léon unleashes his true feelings for the girl, and she for him, and then pushes her to safety. Heartwrenching, as we know that for Léon, the moment has arrived. He must face the forces of the law, knowing that they are led by the corrupt Stansfield, and fight for his very life. But in doing so, he knows Mathilda will live. 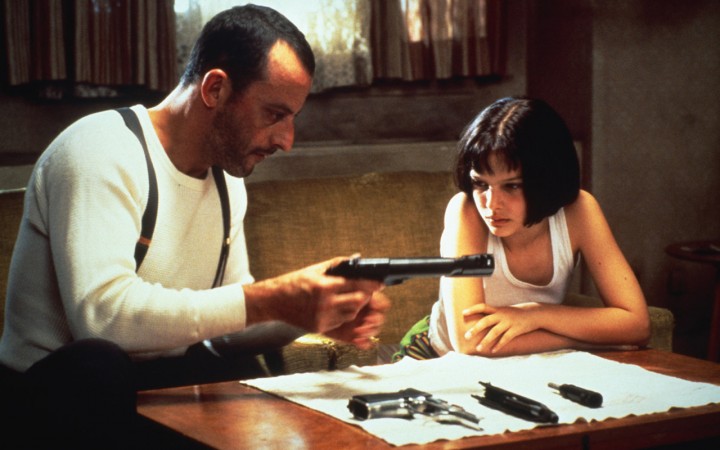 For those of you who have never seen the International Version, which expands the original cut by around 20-odd minutes, you need to do yourself a favor and revisit this amazing film. Besson has done a similar job to Peter Jackson in that he’s returned material to his work which adds more emotion, more character development, more back-story to a film already filled to bursting with it. Mathilda’s training is examined in more detail, as Léon puts her to work on his jobs, using her as an accomplice to achieve his goals. For me, having seen both versions (the original US version is currently the only one available on DVD here in Australia, while the International Version is available via Amazon) I can attest to the greater appeal of Besson’s full vision being explored. Some would say the overt sexuality of Portman’s performance is uncomfortably like soft-core child porn, and others would perhaps argue that having a young girl as a central character in a film so violent is a violation of an unwritten code of conduct in Hollywood, and I guess they do have a point. Mathilda is a precocious young thing, and Portman is exceptionally good here: her portrayal of the brave but scarred ingenue is top shelf, yet bizarrely confounding: how has Portman never really topped this? I don’t think she’s ever been better than in this film, and she’s now done a fair few since this was released in ’94. 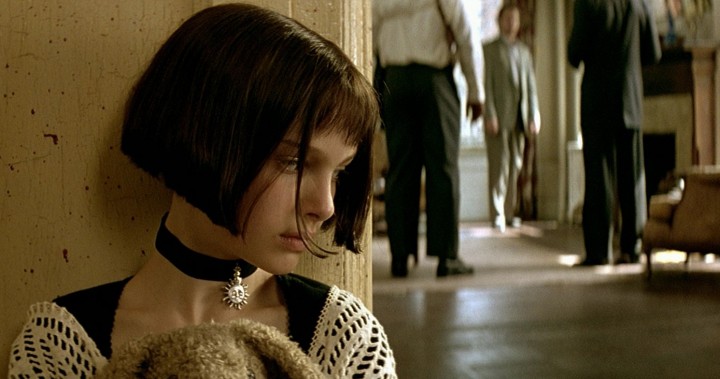 The film itself is masterfully crafted, from a script that Besson himself wrote; echoes of his previous works abound here, including La Femme Nikita, in which Reno was again cast as a hitman/cleaner. Symbolism is rife within the film, from the subtle way in which Stansfield’s character cowardly shoots people in the back (Mathilda’s father and step-sister are both killed by being shot as they flee) which is revisited in the final sequence with Léon, to the shark-like predatory way Stansfield stalks through the scene (there is a moment or two, with Oldman and a doorway with one of those hanging fly-screen things, that is simply eerily chilling) as if he’s on a quest to rid the world of evil by using evil to do so. The elegant simplicity of Léon’s life, the brutal savagery of Stansfield, and the sadness enveloping Mathilda’s; the film scores points for bringing each of it’s central characters to life in a way that is uniquely memorable.

Léon: The Professional remains, for me, perhaps the best work of Besson’s directorial career, encompassing even The Fifth Element, and defined the assassin-genre film forever as a legitimate art-form. Perhaps counterpointed by the lackluster Grosse Point Blank a few years later, Léon remains, for me, the most impressive idealized assassin film put onto the screen yet. Superb film-making, a true cinema classic.