Cast : Rufus Sewell, Kiefer Sutherland, William Hurt, Jennifer Connelly, Richard O’Brien, Ian Richardson, Bruce Spence, Colin Friels, John Bluthal, Melissa George, Ritchie Singer, Nicholas Bell, David Wenham, Mitchell Butel.
Synopsis: A man wakes up in the bath of a hotel, suffering some sort of memory loss. When he is pursued by the authorities for a series of murders, he not only begins to question the very nature of his own memories (or what there is of them) but the strange sensation that the very world he lives in might not be real.

One of the great science fiction films of the 90’s, Dark City is a futuristic, somewhat oddball film starring Rufus Sewell as a man with no memories searching for the answers that bug him: where is Shell Beach, and why can’t anybody tell him how to get there? Okay, so Dark City isn’t some glorified travel brochure film, but it is one of the most amazing technical and narrative feats in recent cinematic memory. Rufus Sewell plays John Murdoch, a man who wakes in a hotel bathroom to find he doesn’t remember anything: who he is, how he got there, and what he’s supposed to be doing. When he is tipped off by a mysterious phone call from a Doctor Schreber (Keifer Sutherland), to the fact that a group of men known only as The Strangers are in pursuit of him, he flees, taking off into the city to escape their creepy clutches. Murdoch is a man utterly confounded, a man with no memory lost in a world where you need them: his “friends” and associates all know about him, and while at first he seems to think his memory might come flooding back, he soon realises that, when all the city falls asleep around him at the stroke of midnight, there is something very wrong with the world. 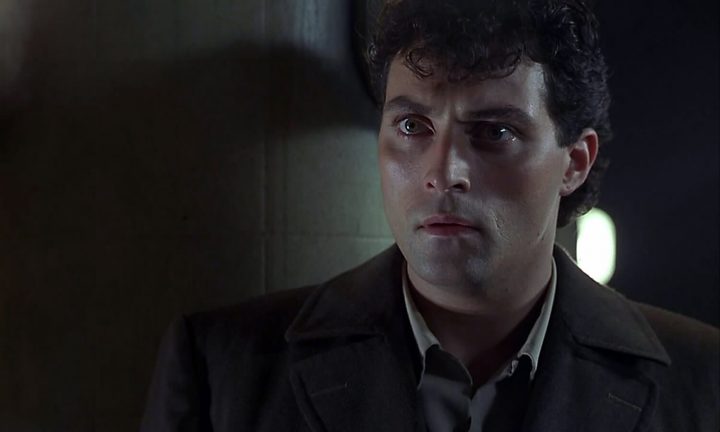 Murdoch soon realises that The Strangers are a group of aliens controlling the memories of the entire city, which in itself, isn’t actually on Earth, but in reality, floating through space on a giant power-plant of a device. With time and space able to be manipulated by The Strangers, who seem to want to learn how to control humans by their memories, John faces some serious adversaries, and an almost incomprehensible battle for survival. Indeed, with his own powers beginning to manifest themselves, such as the ability to control matter and time, John becomes a key player in the future of the city. His wife Emma (Jennifer Connelly) doesn’t understand his inability to remember their lives together, and a local detective (William Hurt) is a little weirded-out by Murdoch’s seemingly rambling behaviour. But, eventually, both of them come to realise that their memories of Murdoch, and indeed, of the memories of the entire city, are false, artifacts of an experiment in manipulation by the Strangers. Key to understanding this is the plot device of Shell Beach, which is touted as an exit point for the city, and a place where John apparently spent much of his childhood. In trying to reach Shell Beach, John is constantly thwarted by the fact that nobody, not even the taxi driver, know how to get there, and become confused when pressed for information. 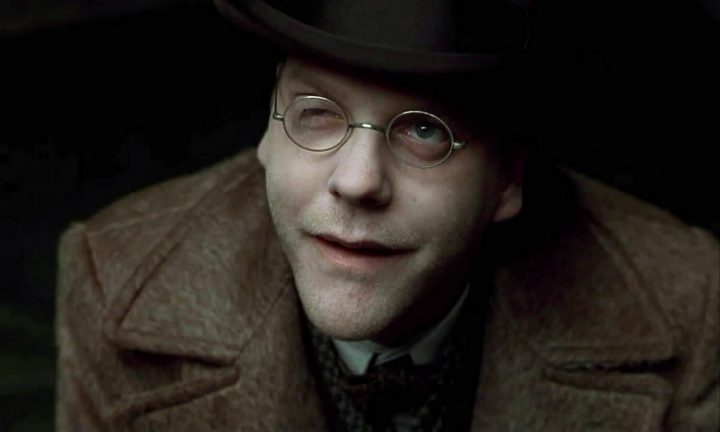 Dark City is an amazing visual and narrative feast, a veritable mystery wrapped up in some lavish set-pieces and gorgeous cinematography, directed with aplomb by Australian Alex Proyas. Filled with moments of plot twists and turns, and a wonderful turn from The Rocky Horror Picture Show’s Richard O’Brien as the villainous Mr Hand, one of the Strangers, Dark City is elevated into greatness by a lack of contrivances and commercial acquiescence. There’s not a skerrick of studio tinkering (with the exception of the debatably necessary opening monologue/voice-over), the script and editing is razor sharp, the performances all uniformly excellent: there’s almost nothing to criticise in this film at all. Filmed at Fox Studio’s here in Sydney, Australia, the background casting is littered with a smattering of wonderful local talent, including the amazing Bruce Spence (who was born to play one of the rake-thin, pale-white Strangers!). The late Ian Richardson plays the leader of the Strangers, Mr Book, who ends up engaging in one-on-one psychic battle with Murdoch at the film’s finale. Melissa George, who originally appeared in Aussie TV soapie Home & Away, and has also appeared in films like Mulholland Drive, 30 Days Of Night, as well as US TV shows like Friends and Alias, plays the small role of a young hooker who is brutally murdered, and whose character plays a pivotal role in the key narrative of Dark City. Keep an eye out for Colin Friels, too, an Aussie actor best known for roles in films like The Coolangatta Gold, Cosi, and the Billy Connelly comedy The Man Who Sued God.

Dark City is a pulp-inspired, noir mystery story, first and foremost. William Hurt’s detective is a secondary character, although with him, we find ourselves trying to uncover the mystery of the secret the Strangers are hiding, as well as the emotional journey undertaken by John Murdoch. The science-fiction aspect of the movie is also, almost secondary. The questions the film raises are pertinent: in what stock do we put our memories? In a similar “alternate world” vein to The Matrix, in which humanity is subjugated by outside forces and led to believe their world is real, when Murdoch discovers that the city in which he lives is a massive science experiment floating through space, he decides to do something about it.

The Strangers, who are not adverse to killing their human subjects to maintain the illusion of reality, move through the created world like a collection of Grim Reapers, their chilling looks and lack of emotion seemingly at odds with what they are trying to achieve. The Strangers seem to revel in human misery, at least, that’s the strongest of our emotions they illicit, and when Mr Hand injects himself with Murdoch’s memories to allow them to track the recalcitrant subject, the Stranger goes right off the rails. I guess it’s a kind of allegory to how our destructive natures, our anger and violence-prone society, can affect everything. How rampant, unchecked aggression can lead to self-fulfilling annihilation. Murdoch’s realisation of the truth, about the Strangers and about his position in the Universe, causes him to question the power with which he seems to be imbued. For Murdoch begins to manifest the same powers of transmogrification that the Strangers themselves have. Able to bend matter and time to his will, Murdoch represents the spanner in the cogs of the machine, and consequently, is hunted more than ever.

Dark City is a desolate film, a film filled with nuance and analogy, themes of love and anger, of isolation and abandonment. Yet it outwardly comes across as an action/adventure film, with a twist of film noir and a smothering of sci-fi. The denouement is devastating to both the viewer and Murdoch, as the realisation kicks in. Then, the horror of Murdoch’s rage is unleashed, and for a moment, we feel vindicated. Yet, the innocent must be saved, and it’s Murdoch’s assumption of control over the city that is the defining moment, for he saves the inhabitants of the city from going slightly mad in discovering the truth for themselves. Perhaps, unlike the “we must free humanity” narrative of The Matrix, here, it’s better to leave the human inhabitants of the city none-the-wiser of their situation.

If you’re searching for a solid, entertaining film to watch that will gnaw at you for a while afterwards, give you a mental kick in the bum or perhaps even shock you into searching out some of Proyas’ other films (I Robot, Garage Days, Knowing), then Dark City is for you. It’s an intelligent, thrilling and brilliantly conceived (and executed) work of science fiction, which will rightfully sit alongside classics of the genre as a masterpiece of storytelling.