Director : Stephen Norrington
Cast : Wesley Snipes, Kris Kristofferson, Stephen Dorff, Donal Logue
Censorship Rating : MA
Target Audience : Vampire, Comic-Book Films, Action
Length : 120 Minutes
Synopsis: A half-vampire hunts down and slays the creatures that made him what he is. When a powerful new vampire begins to assert his authority over the local population, Blade must intervene to thwart his plans. Using violence where possible.

Review : Spectacular, ambitious and thoroughly entertaining action romp, with Snipes finding the perfect role: a character devoid of emotion, quick with the witty retort, and quicker with his fists and a sword. Dynamite action and a thunderous soundtrack propel this from it’s B-grade origins to a souped up, pimped-out vampire action thriller.

Okay, I’ll bite. Guffaw. Blade is one of the most entertaining, full-blooded (guffaw again) action thrillers to come out of the comic-book inspired world in  a very, very long time. Almost anti-social in it’s intent, with a core hero who seems more content to slice and dice his way through the bad guys with nary a glance at the body count meter, Blade is one hugely entertaining slice of underworld pie.

Born of a mother who had been bitten by a vampire, Blade (Snipes) came into the world in a veritable orgy of violence. But his life’s mission, unlike those of most vampires, is not to drink blood, but to eradicate and destroy the evil creatures who prey on the weak and unloved. Blade, himself half vampire and thus, craving blood as well, can move in and out of daylight as he sees fit, something his vampire cousins cannot do, much to their chagrin. This gives Blade a significant advantage in that he’s able to hunt them almost 24 hours a day, is he so desires, since he can move freely during the daylight hours. But a renegade vampire, Deacon Frost (Dorff) wants to resurrect the power of the ancient vampires to rule the world, taking out Blade as well. Blade’s “father” figure, Whistler (Kristofferson, in his best role yet) arms the slayer with his varied and useful weapons, in order to combat the vampire menace. 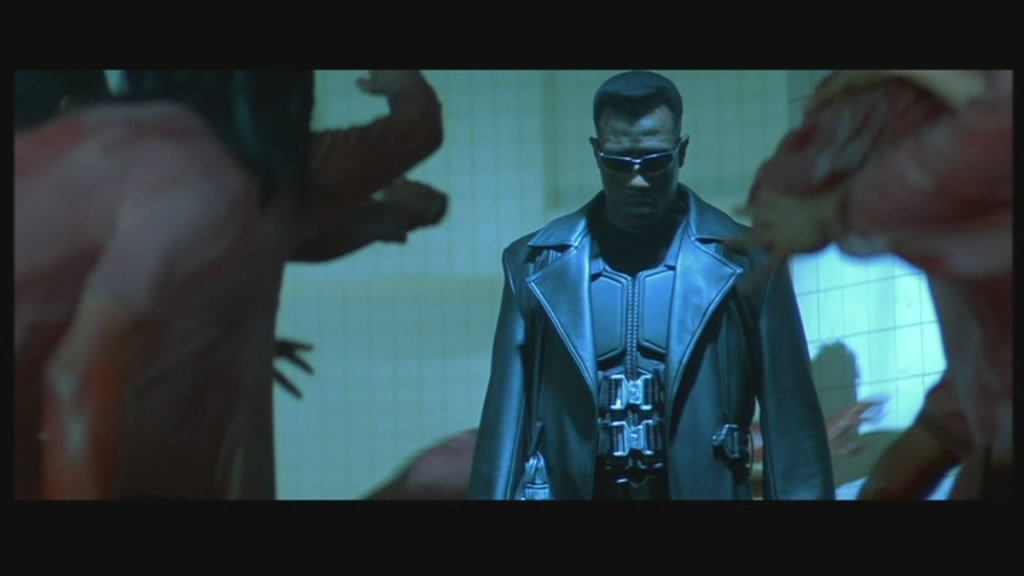 You guys ready to party, or what?

Using his enhanced strength and regenerative abilities, as well as a slick, razor sharp sword, Blade slices, punches, kicks and pummels his way through the armies of the living dead in order to save the world, a world which doesn’t appreciate his special skills.

Based upon the Marvel Comic’s character, Blade revolutionised the comic-book film in a way, allowing a darker, seedier character to grace our screens in a way that Superman, Spider-Man, Batman and the others, simply couldn’t do. Here was a character so torn with his humanity, his soul half-and-half, that it’s almost desperate in it’s plight to rid our world of those who seek to usurp it. Power and wealth is all the vampires seek to obtain, and they do so by infiltrating our society (the humans) through business and politics, so that they are both never discovered and never prosecuted. Although, Blade seeks to stop that. 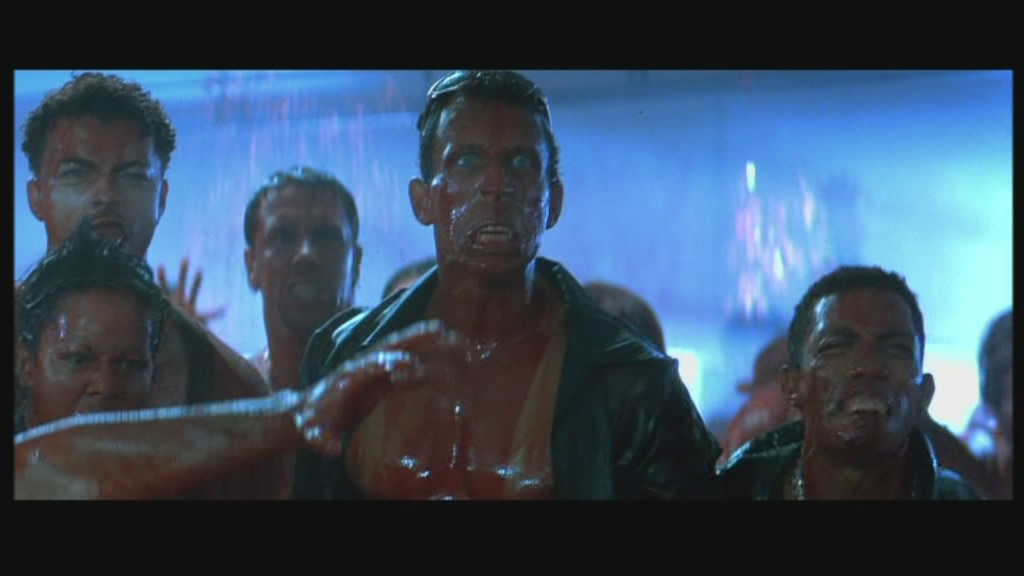 Man, did I snort the wrong powder? What the hell is going on?

Wesley Snipes couldn’t have chosen a better character for his limited ability to act. Blade, at least as Snipes has portrayed him, is a sneering, powerful, brutal man, devoid of any deep emotion (save for that of his long lost mother, who dies while giving birth to him) and truly lost to us as a real character…. except for that sword. Snipes wields the blade with such precision, such powerful menace that you can almost feel the energy exude from him through the screen. Blade is a snarling, bitter character, somebody to whom the real world is an illusion and the vampire world is like some variation of purgatory: he wants neither, and yet exists in both. Snipes manages to convey the great sense of isolation Blade feels by being a half-caste, with only a minimal amount of dialogue or “acting”. 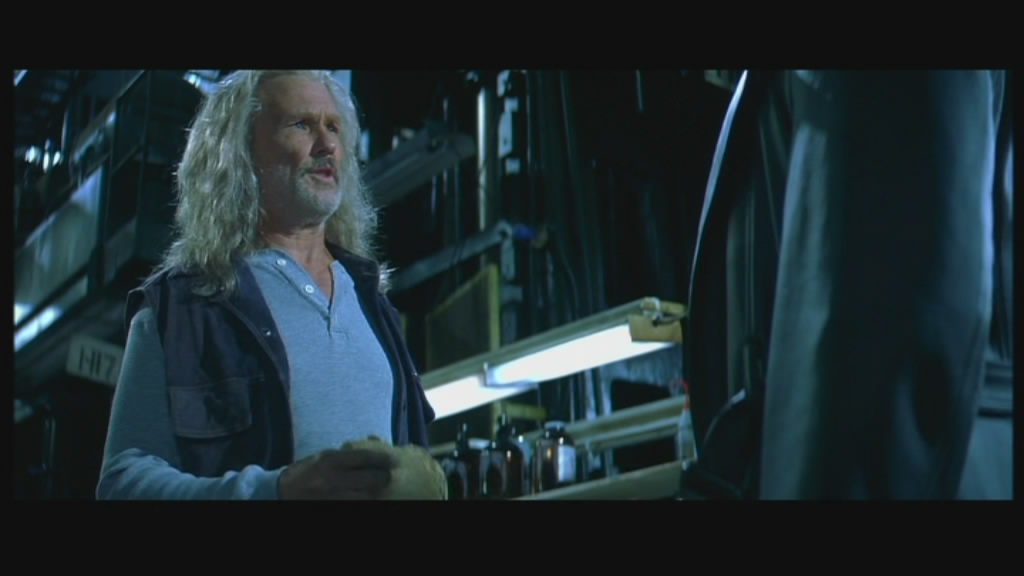 Kris Kristofferson is wonderfully droll as Blade’s assistant, Whistler. Whistler is the one person Blade can trust to help him in his ongoing battle against the vampires, to satiate his own thirst fro blood and to be a kind of conduit between Blade and the real world. Kristofferson’s role here was the first time I’d seen the man act on the big screen, and while perhaps a little crusty in the looks department, the country singer certainly has a commanding screen presence and a wonderful voice. That, plus he gets the best line of the film (you’ll know it when it happens) after an explosion creates a new doorway into the vampire’s lair….

Stephen Dorff is somewhat ineffectual as the chief villain of the film; I think his boyish looks and small stature mitigate his “evilness” and he lacks the ability to really impose himself physically on the movie. Any sense of menace Norrington was trying to generate went out the window by casting somebody who looks almost like they’re still at school. Dorff hams it up a lot, his Bad Guy persona a kitsch, clichéd turn at trying to be a slimy, underhanded vampire renegade. Unfortunately, it’s a little laughable, although the final battle between Frost and Blade is brutal and really, really well done by both performers. 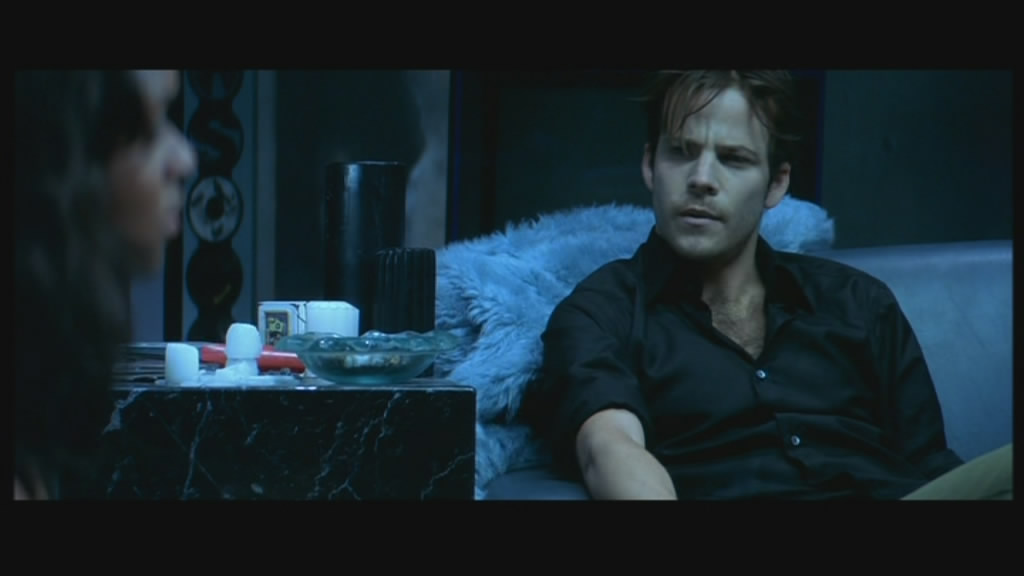 Where the film really shines though is it’s action, it’s violent blood-letting and kick-boxing moments vividly captured by Norringtons smooth, rapid-fire camerawork. The opening nightclub scene, which play’s across the films opening credits, with the thunderous bass track “Confusion” by New Order, coupled with the flickering florescent light and highlighted blood-red colours of death, kick this film off with a real bang. And it only goes on from there. Norrington managed to weave some great little comedy touches into what is essentially a revenge flick, with Snipes slashing his way through the hordes of vampire thugs, all of whom dissipate into ash when “killed” by Blade’s sword. Donal Logue, who manages to lose a hand in the very first scene, plays on this throughout the movie, and this, coupled with other, smaller vignettes, allows the viewer to maintain a somewhat warped sense of humour throughout. 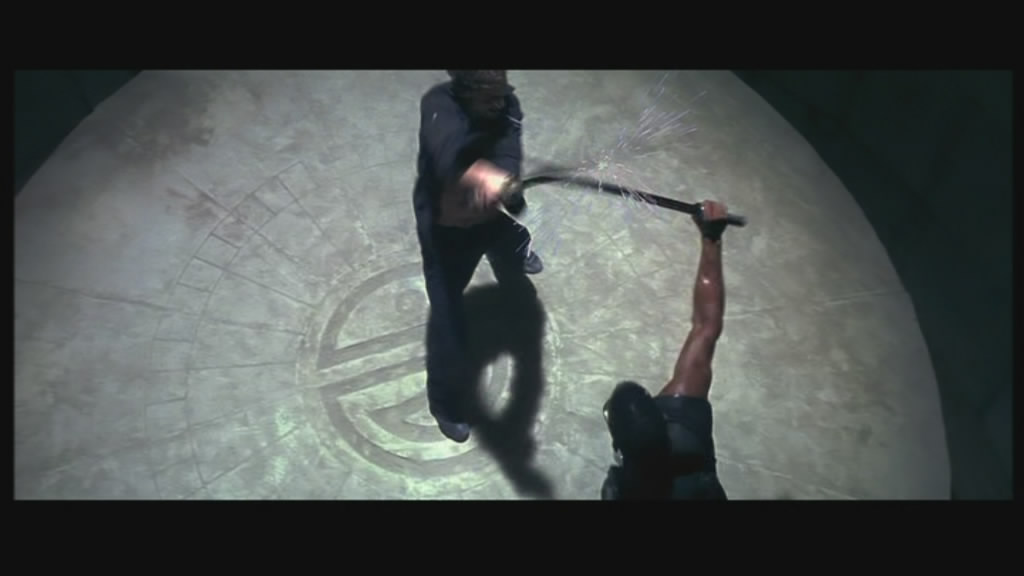 Swordfighting with magic. I think.

It’s a dark film, certainly not your traditional comic-book movie, and the hero here is portrayed as somebody living on the edge, and quite capable of becoming unbalanced towards the side of evil himself. While this facet is only really hinted at during the film, and not explored in depth, it’s a concept that’s missing from a lot of mainstream comic-book films today, where the hero is a tormented, put-upon soul with only the barest of emotion keeping him/her from becoming the very thing he’s trying to fight. Blade is a great action film, filled with some pretty decent effects (and, if I was to be honest, some truly appalling ones….. whether this is a fault of the effects team or a rushed schedule, I am not sure) and a great soundtrack, as well as some blisteringly cool action sequences that will test out even the most serious of home cinema set-ups. Grab this one on DVD and set it to full blast.