Movie Review – Lord Of The Rings, The: The Ralph Bakshi Version

Peter Jackson’s version of The Lord Of The Rings wasn’t the first time somebody had attempted to bring Tolkien’s vision to the big screen. Back in 1978, a filmmaker named Ralph Bakshi had delved into Tolkien’s world to present an animated version of Frodo and Sam, Gandalf and Strider, all with the use of a rather unique form of storytelling: rotoscoping. We thought, in the interests of a more complete review of Tolkiens’ massive tale, we’d quickly touch on the original film version, as released by United Artists, back in the late 70’s.

Bakshi, known for the X-rated film Fritz The Cat, as well as other projects like Coonskin and Heavy Traffic, signed up to direct a retelling of the first part of Tolkien’s epic, based upon events of Fellowship of the Ring and portions of The Two Towers. After the success of a previous film, Wizards, which told of a post-apocalyptic Earth transformed by mutants and humans duking it out, Bakshi had a fair idea of what he wanted to achieve with Tolkien’s massive opus. Initially though to be unfilmable, especially in live-action, Bakshi decided to make the film in a format that could do the mystical and wonderful effect justice: animation. However, not your standard Disney-esque animation, this would be different. Bakshi would shoot all his action in live action, using real actors for each role, and then rotoscope animation on top of them, using merely the movements to accommodate his storytelling. The fluidity of the animation, over the top of live elements, meant a more… well, realistic feel for the film. 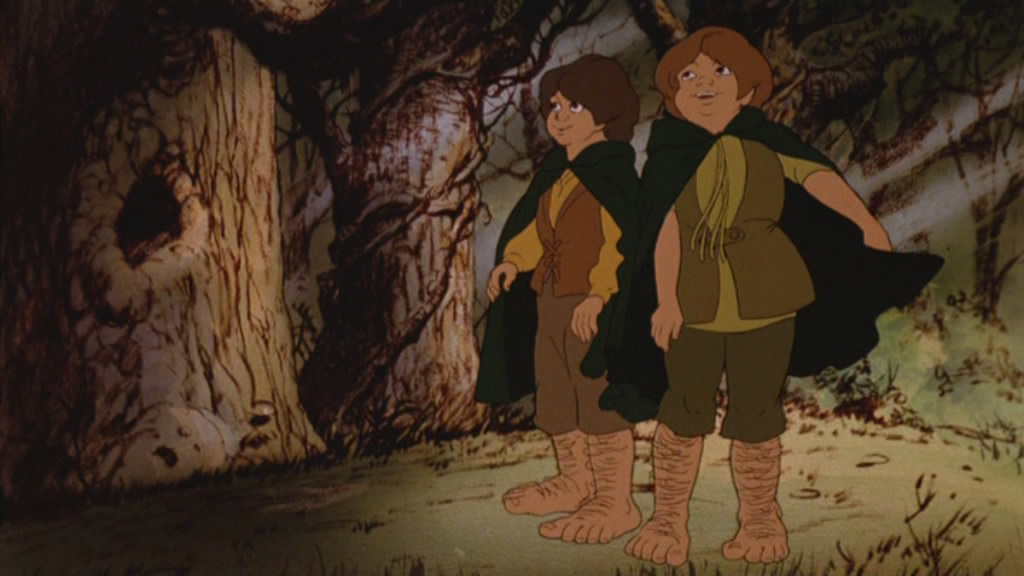 Rotoscoping, for the uninitiated, is the art of painting out, or in, an image over the top of a pre-existing film element, to convey an image that wasn’t captured in the original film frame. Mainly known (at the time) for removing wires and cable used to make actors fly or swing through the air, stunt wires etc, the rotoscoping art was a painstaking form of animation that required dedication and expertise from the artisans performing it. More often than not it was tedious, mind-numbing work, and an unlikely form to use as the main source of technique in a film proper.

Still, Bakshi went ahead with his audacious plan, seeing it as the only way to be able to do Tolkien justice. The magical world of Middle Earth, with it’s goblins, Hobbits, wizards, dragons et al, were suitable only for the technical limitations of film at the time, which meant that real-live actors and sets, locations and effects, were not able to deliver the story in a way deemed acceptable.

Assembling a cast that included Christopher Guard, William Hurt and even a pre-Star Wars Anthony Daniels, Bakshi set about filming the sequences in live-action first, then sending the frames to be animated. Not all the voice cast was used for the live action filming, however, as some extras and stand-in’s were used for this work. Key sequences of battles, in which hundreds of people are seen on-screen, were filmed live, then animated, a process which was painstaking in the highest, although the end result was a level of detail much more cost effective to achieve than animating from scratch. 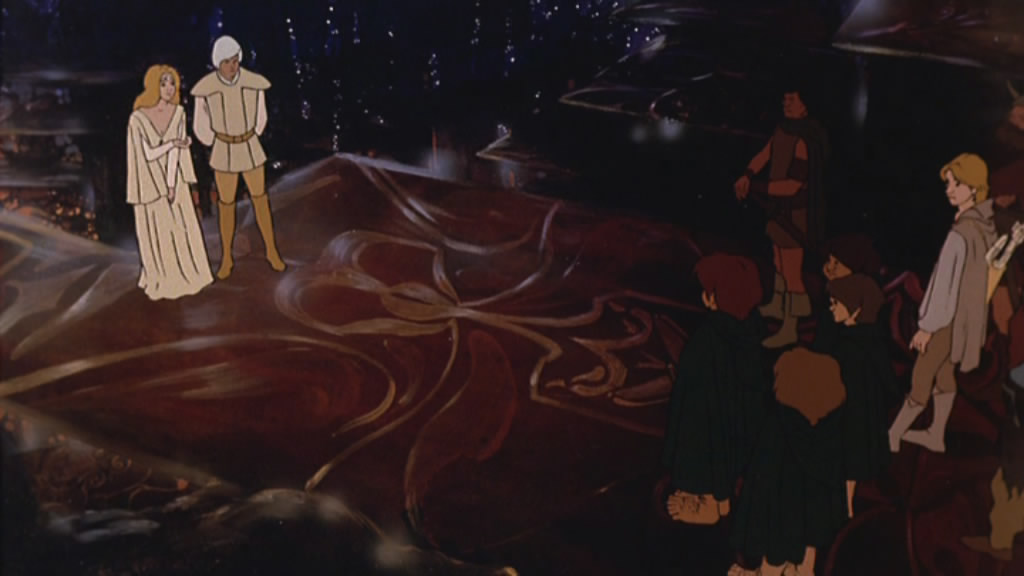 The Fellowship meets Galadriel in Lothlorien.

After years of production, the film, entitled with the laborious moniker of JRR Tolkien’s The Lord Of The Rings, was released, to financial success around the world. Even though it was panned by many critics, who didn’t like the freely edited story and the rather unique (but somewhat disconcerting) style of animation.

Indeed, Bakshi’s Lord Of The Rings, which uses elements of Fellowship and Two Towers, is an inaccurate moniker, as the film is only the beginning of the story: it ends after the battle for Helm’s Deep. Due perhaps to time and money constraints, the original text of Tolkien is used in a minimalist way, with most characters given short thrift in the final film, reducing the powerful elements of the story to simple, five-second bits in amongst a series of stylised, and utterly empty, vignettes. Compared to Jackson’s versions, Bakshi’s original film is almost a Readers Digest version, slashed to bit’s by a studio and audience incapable (at the time) of enjoying such a powerful story told in full. It’s almost a crime to consider that this film was some people’s first look at the world of Tolkien. What must they have thought? Perhaps a little bit of “what the?” at the film ending so abruptly, without a definitive ending of the story. 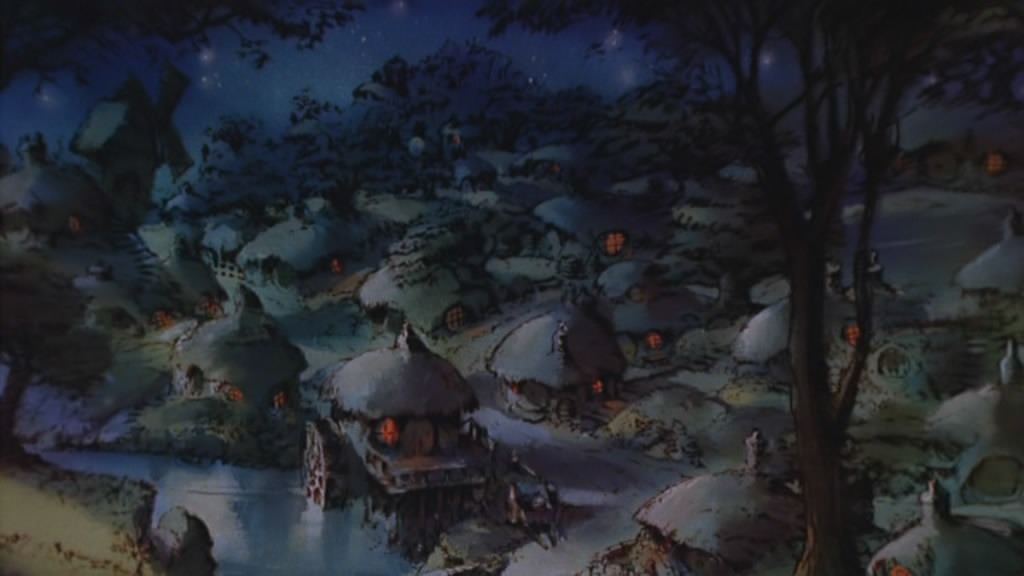 Hobbiton. Or, perhaps, the village of the Smurfs. We’re not sure….

In the effort to bring the popular novel to the big screen, and thus sate the desire of millions of fan’s around the world who wanted to see the story writ large on the public consciousness, the studio backing the project, United Artists (not the current version of the label, mind you, but the original!) and producer Saul Zaentz tried to bring a certain style of vision to the project: almost nobody knew what to do with Tolkien’s story, such was it’s complexity and epic scope, and so (apparently) they simply shrugged their shoulders and allowed Bakshi to make his film the way he saw fit. However, the studio baulked at the idea of releasing a film with Part 1 tacked onto the end (which was Bakshi’s original idea, since the second part would be made and released in due course) and consequently, audience backlash was swift and furious. People went into the cinema thinking they’d get the entire story, which wasn’t the case. United Artists thought that adding a Part 1 to the title of the film would reduce it’s take, since people wouldn’t want to knowingly see a film that told only half the story. In light of Jackson’s version, and the trilogy’s success, it’s easy to see that in hindsight, perhaps United was wrong in this respect. Mind you, the film would have to stand on it’s own, regardless of title on screen, and in this instance, Bakshi’s version actually did just that. 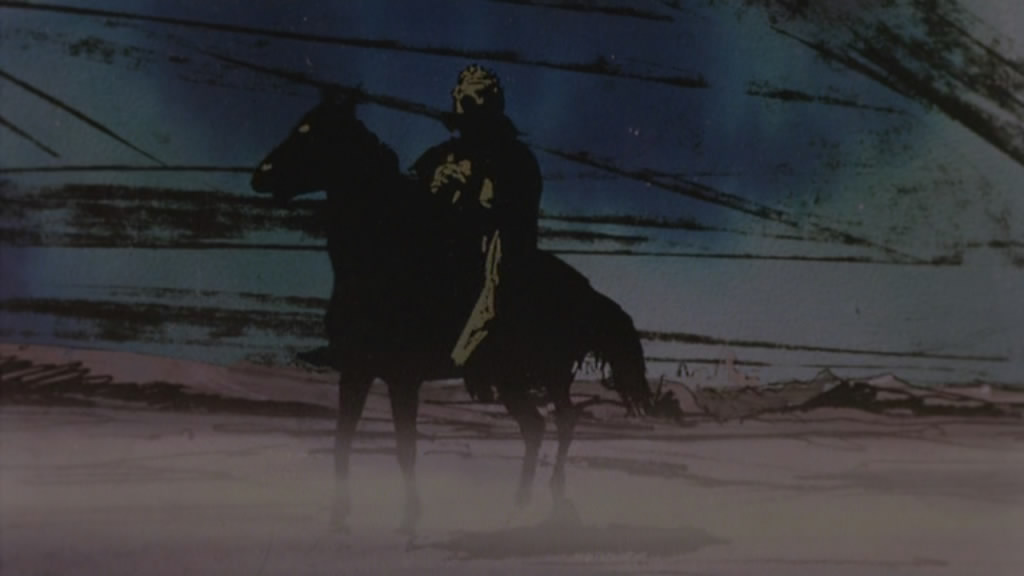 A Black Rider stalks the Hobbits.

Still, it was rightfully criticised for it’s lack of adherence to Tolkien’s original story, a mustering of the ideas into a coherent storyline utterly forlorn for those who had no idea what Tolkien and the One Ring was all about. For me, the film remains accessible only for the fact that I’ve read the books. Had I not, then it’s possible that Bakshi’s version would have flown straight over the heads of most. In any case, the convoluted and somewhat contrived storyline is made even worse by the lack of emotional thrust and character development given to even the most central character.

While Bakshi’s version of The Lord Of The Rings might be considered a classic in this day and age, it’s still not that good a film, based on modern eyes. The story is rushed, the characters half-baked, the themes glossed over in a stylised and awkward animation process that, try as it might, cannot possibly accommodate the elegant and powerful nature of the narrative. Perhaps the most ambitious thing about the film is not the animation, but the way in which large chunks of story are removed from Tolkien’s world, and brushed over in the most brief fashion in the final film. Whole sections of the original text of Rings have been discarded, thrust aside with the brevity of a single line of dialogue like: “Frodo and Sam had many adventures before they reached Mount Doom” which, when you boil it down, means “the studio cannot afford to do the whole thing so we’ve simply taken the most popular bits and animated them”. 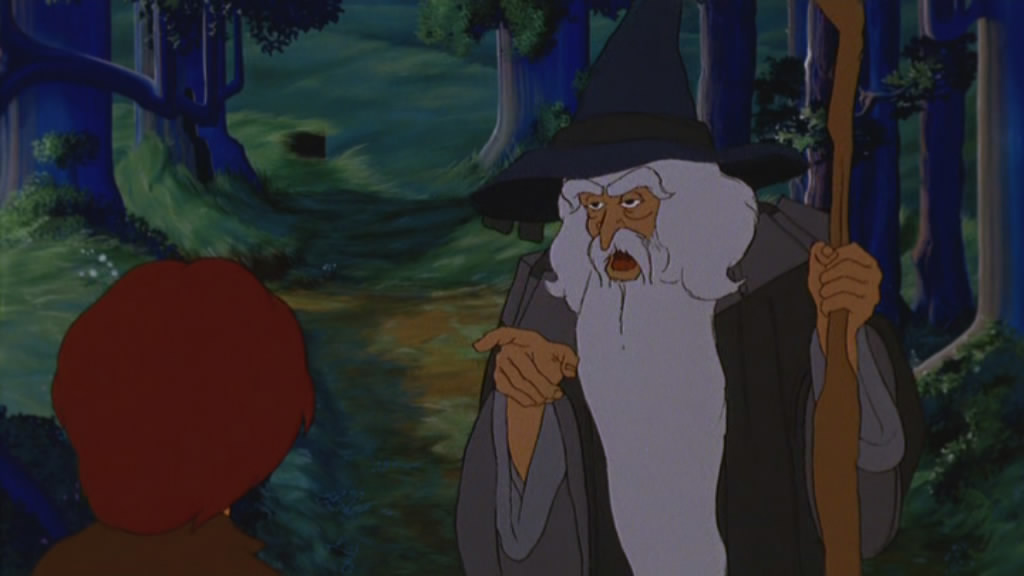 So is the Ralph Bakshi version of The Lord Of The Rings a good film? Honestly, as somebody who writes film reviews for a hobby, I couldn’t find it within myself to find anything positive to write about here. I can try justifying the creative decisions made on this film and extrapolate a positive spin on things, but it’s such an inherently stupid film I couldn’t do that to you, loyal reader. Frodo and Sam, much loved characters around the world, are reduced to simple ciphers lacking the depth and characterisation to warrant their adventures: in fact, I’d go so far to say that if Bakshi and the studio thought this film was a love-letter to Tolkien and the world he created, then the poor man must surely be spinning in his grave. It’s a desecration of everything the film ought to have been, both narratively and stylistically. The animation is okay, but not a patch on non-rotoscoped traditional stuff.

While it stood for a long time as the only cinematic treatment of Tolkien’s story, now that we have Peter Jackson’s version, Bakshi’s sampling can only stand in the distant background and goggle at what was achieved, like the rest of us. 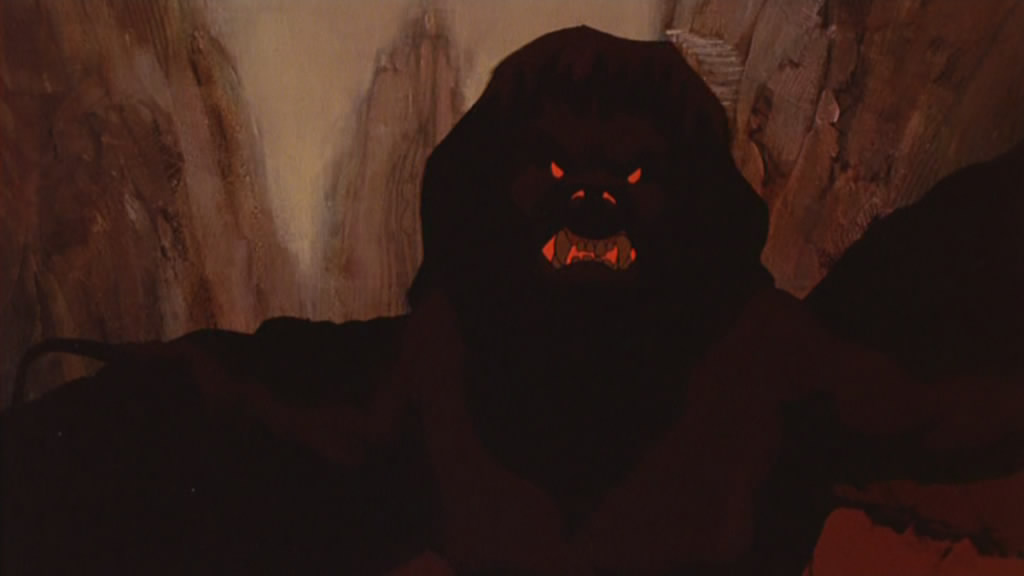 The Bakshi Balrog. We think it’s a lion.

As a side note, since the film version of Rings was a financial success, ABC and Warner Bros decided to animate the concluding part of the story, in their traditionally animated format version of Return Of The King. Rankin/Bass, who had, back in 1977, produced a video release version of The Hobbit, were again tapped to produce the version of Return, so I guess, in essence the entire Tolkien story has, at one stage, made it to the screen before Jackson’s, but in a piecemeal fashion not in any way applicable to the quality associated with the authors original intentions. I cannot comment on the quality of these other versions, since neither The Hobbit nor the Rankin/Bass Return Of The King are available in Australia on DVD, or locatable on VHS, at the time this article goes to print.

In Lord Of The Rings, Middle Earth, Movie Review