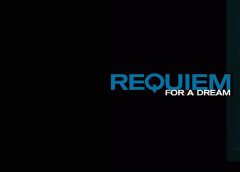 What we think :  Searing, emotionally apocalyptic fable-tale about addiction and how it destroys life. Almost the antithesis of Trainspotting’s more humorous look at drugs, Requiem For A Dream is quite possibly one of the hardest films you’re ever likely to watch; the performances are stunning, the direction and production are top notch, and the end result is a haunting, provocative essay on human failure that will stay with you for days.

As Darren Aronofsky’s followup film to Pi, the original classic low-budget phenomenon, Requiem For A Dream divided and captivated audiences the world over when it was released. Put simply, it’s not a film you can enjoy, in the truest sense of the word, but it’s a film that almost beggars description on just how powerful and potent it’s impact is upon the viewer.

Requiem tells a multi-layered, and utterly disturbing story of addiction and degradation, of four separate individuals, through the course of the film. In one of the most amazing screen roles I’ve seen her in, Ellen Burstyn portrays Sara Goldfarb, a middle-aged mother to son Harry (Jared Leto) who is slowly, slowly, becoming addicted to prescription medication and diet pills to lose weight before she appears on a game-show she loves. Harry, meanwhile, together with his girlfriend Marion (Jennifer Connelly) and best friend Tyrone (Marlon Wayans) start taking drugs, particularly heroin, in an effort to make a little money over the summer. Things turn decidedly deadly, however, when they all begin to succumb to the lure of ecstasy and depravity that accompanies humanity into the long, downward spiral of drug addiction.

Unlike Trainspotting, which almost marvelled at the heroin culture in the drug world, Requiem For A Dream pulls no punches in it’s stance on the power of addiction, to any form of drug. Sara isn’t addicted to heroin, so the point about hard drugs cannot be made for her, however her increasingly alarming dependence, and subsequent hallucinations from, her medication (self medicated, to boot!)  show us just how easily it is for relatively “normal” people to become obsessed and addicted. Sara’s journey, for me, was the most profound, taking an ordinary woman living in the suburbs and slowly transforming her into a comatose wreck at a mental hospital. Leto, as the disingenuous son, goes even further, with the needle wounds from his heroin injections becoming infected to the point where he might lose his arm below the elbow, if both harrowing and heartbreaing. Wayans, demonstrating an ability to perform at a level that I thought was above that capable of anybody with his surname, is brilliant as the misanthropic friend Tyrone, suckered into the dreams of glory and riches as he and Harry try and make a quick buck.

The fact is, drugs are a blight on society, especially the illegal ones. Requiem never points the finger at any particular social or economic class, however, it merely demonstrates just how easily it is for anybody, even the very rich, the dirt-poor, the educated and the ignorant, to become addicted. And that’s what the film is about: addiction. Aronofsky portrays the high of heroin, coupled with the low of the downer afterwards, with elegant, raw simplicity. It’s devastating to watch, you want so very desperately to look away, but you simply cannot. Heartbreaking isn’t a word strong enough to describe what these characters, who could be you or I, go through. Their desperation, their loneliness, their emotional isolation as their addictions take hold, is depressing to see, and explodes the myth of drugs being “cool” forever. If ever there was a film that deserved to be shown to young people in school, to warn them off drugs, this would be it.

Darren Aronofsky continues his directorial powerplay from Pi to create a suffocating, nightmare of a journey that once begun, is impossible to stop watching. Told in a non-linear style, with stories and narrative intersection throughout, Requiem manages to weave a taut, heart-pounding tension filled story as you wait, half hoping these people will “snap out of it” and things will be okay. But it’s not okay, and Aronofsky takes us where no other film I’ve seen dares; into utter depravity.

It’s hard to really put into words the emotional impact this film has on a person: those who abhor drugs generally, and wont have anything to do with a film about people taking drugs, deserve to rethink their stance on the subject after seeing this film. There’s an almost palpable sense of sadness within the film, almost as if Aronofsky is sorry he’s showing us this, at the same time as he’s holding our eyelids open Clockwork Orange-style to make us, force us, to watch the carnage. Reqiuem is in no way a subtle film, for the most part. It has it quieter, more reflective moments, yet the savagery of the situation our four characters find themselves in is primal in it’s impact, and base in it’s level of humanity, a veritable malestrom of shattered dreams and ruined lives that convulse, pulsate and explode upon you like a tidal-wave of desperation and misery.

Aronofsky, in his own way, has created a veritable opiate of a film himself, the structure and slow buildup to the film ensuring our unwavering attention in this finely constructed mire-pit of soul destruction. There’s something calming about the film, almost surreal-ly blissful, until things degenerate. Aronofsky’s film, however, would have been nothing without the groundbreaking score from composer Clint Mansell, whose work here is above and beyond what could have been expected of him, his rhythmic pulse of music is the perfect parallel to the on-screen story. Lux Aeterna, the piece in question, has since been used in countless trailers and TV shows, of particular note The Two Towers trailer for Lord Of The Rings. Mansell’s ability to perfectly adapt his compositional style to suit the mood of the film elevates him to the upper echelon of talent working in film today.

Requiem for A Dream is a powerful indictment on the illicit (and legal) drug trade around the world today. It’s social and political impact has almost defined the very world we live in, as those who seek to profit from the industry are often those who control it, and define it’s illegality. Here, we are not driven to political posturing, however, the film is such a scathing hate-letter to a society that allows such depravity to endure, that one cannot help but draw the long bow to our leaders and their oft quoted lip service to the drug trade, and the ease in which illicit drugs are moved around the world.

Requiem is a film you simply must see: if not for the powerful performances of the lead cast (especially Burstyn) but for the sheer shock-and-awe tactics Aronofsky uses to drag his viewers kicking and screaming into a film, and a world, we’d much rather not see. But we must see it, and endure it. That’s the point. And a point extremely well made. Of all the film’s I’ve ever seen, this is in my top ten of “films to see before you die” recommendations. Stunning.

5 thoughts on “Movie Review – Requiem For A Dream”